Another class concludes today and then in another short week’s time I hold my last foundational course for this year. Nine more woodworkers are freed from the constraints of mass-making because they now know sharpness to levels they never knew before. Truth sets people free and when you know it you know it. When the bank tellers trains they only ever touch real notes. After months of handling good notes, a bum note touches their fingertips and it feels so slightly different but it’s enough to stop them. Looking at the note further the note looks and feels the same. You see inside they know what they know what they know and they cannot dent that something feels different. That’s the nature and reality of truth. No matter what, my students now know what sharp is. They’re free indeed and their newfound freedom is for a lifetime. 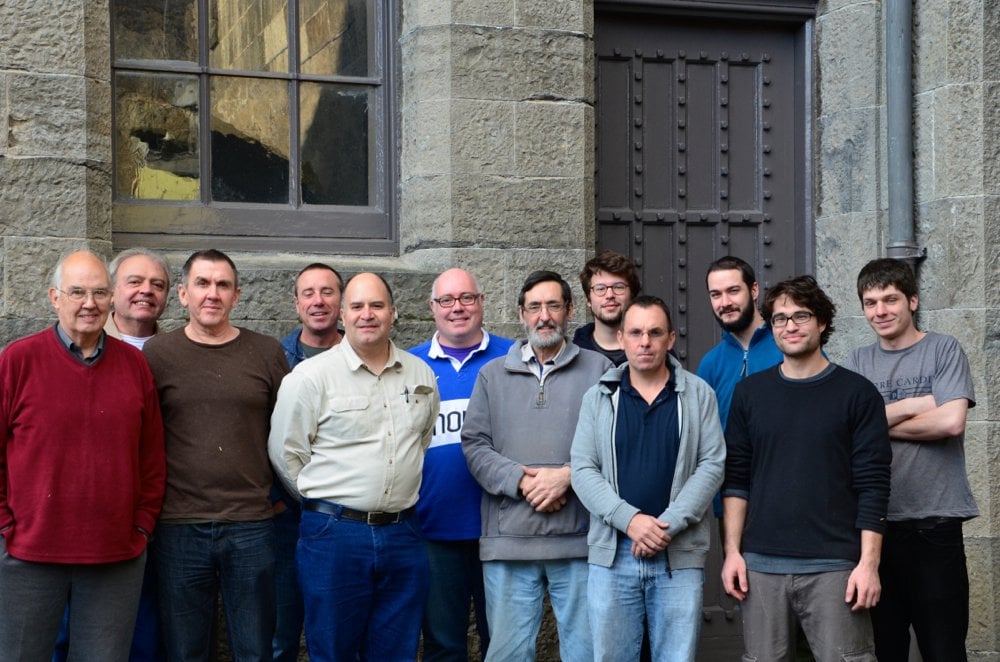 I have taught this class and other similar classes to over 5,000 new and seasoned woodworkers who came from worldwide destinations. That is, I have personally stood within a few feet of each of the 5000 persons I have taught. The course is mine. I developed it in its entirety and pushed it through to the point that it became the springboard into more advanced levels of woodworking where people began making their own boats, canoes, violins and cellos and guitars. Many became furniture makers in their own right. It’s provided the rite of passage from the unknown to the known, from the amatuer to the professional and most woodworkers I have known discover a whole world of real, and I mean real woodworking as opposed to simply machining wood. 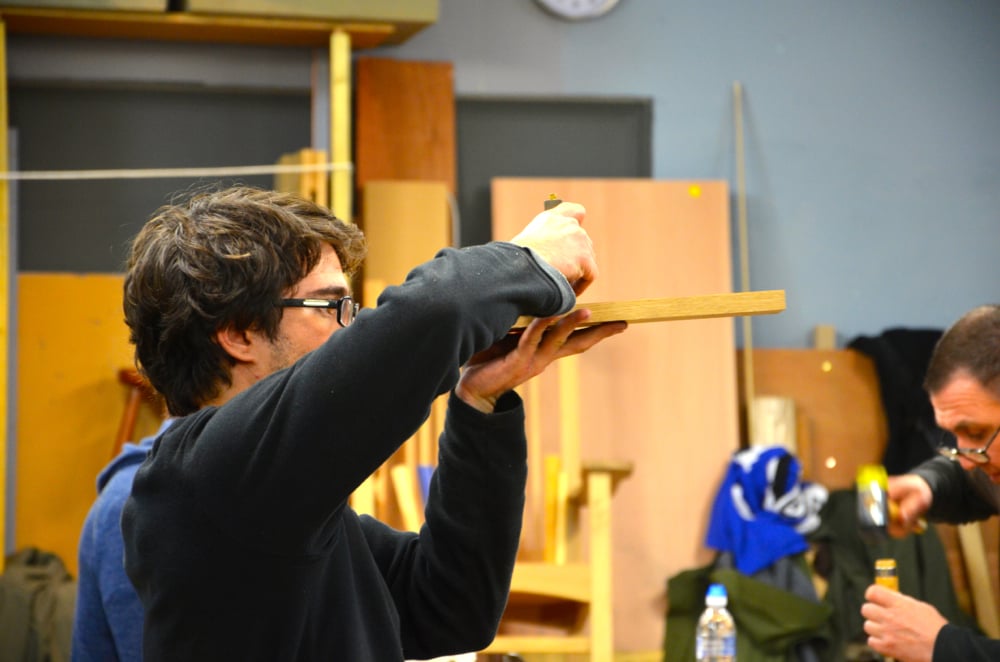 This week has been a week of reflection for me. Reflecting on the woodworking culture and the work I do as a 65-year-old maker come January 4th 2015. The work I do has become so second nature to me that most things I do I do automatically and even without any conscious thought at all. In fact, thinking would for certain disrupt the fluidity of movement to my work and for sure the speed with which I generally work. Mental gymnastics have no place in the measured steps I take throughout a given day and so This is what I pass on to my students working a short distance from me or standing and sitting around my bench as I work or teach or just chat. 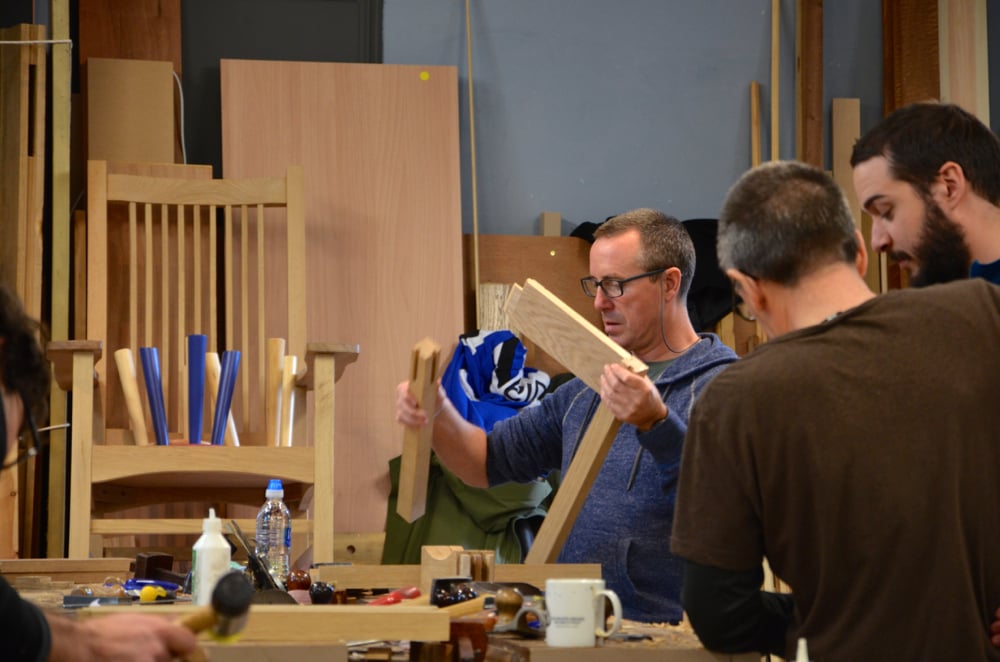 This week was very inspirational for me. I think perhaps one of the most inspiring ever. Its not hard to put my finger on what it was. The full class of men seemed to know no barriers. From day one they related to one another without the usual social fetters and competitive spirits I have always had to dismantle over the years. In some ways they seemed more like children in that they sponged up the information, asked genuine questions without allowing intimidation or self consciousness hinder them. The whole nine days have been pure harmony and personalities blended in seamless continuity every second of every day. Seeing the parts come together, I mean the joints mostly, and hearing the banter between benches, seeing them care for one another and the general repartee and such made me all the more grateful that we host these classes in my workshop. 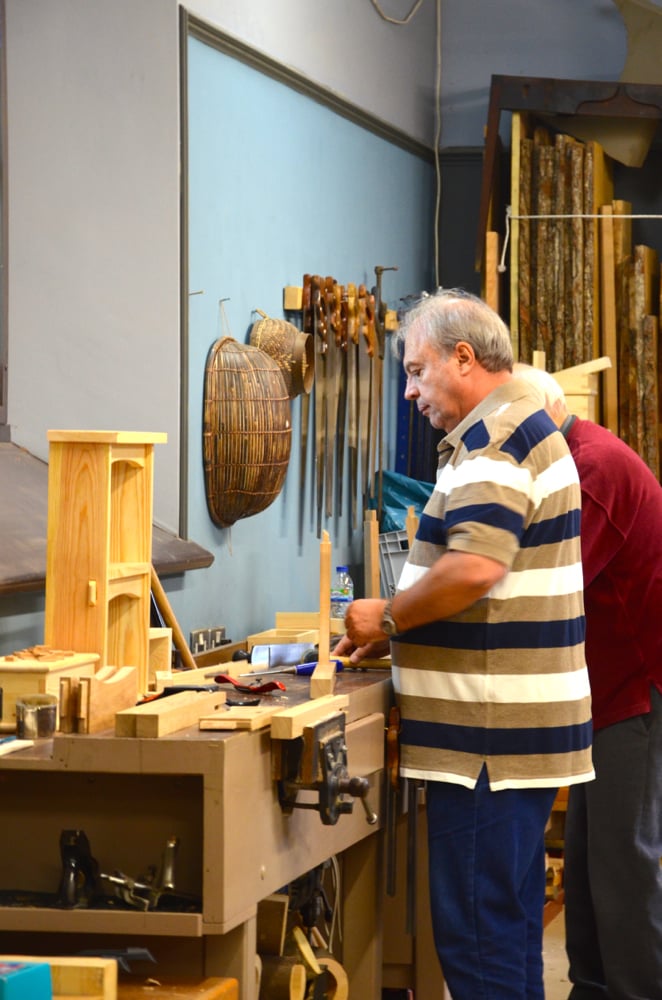 Boxes and shelves and now tables are about done. Today we glue up the final parts and at mid afternoon most of the students will be done and probably ready to leave to be reunited with their normal life. By tonight they will have pretty much mastered the planes and chisels, saws and scrapers, spokeshaves and much more sufficient to never feel ill-equipped again. I love this thought. The thought that they will for the rest of their lives be able to chop mortise and tenons and make near perfect dovetails with a handful of simple and inexpensive tools they can but and restore from eBay for under about £150. They will never be under the illusion presented by sales reps and catalogs again. They now know exactly what to takes to work wood. Their confidence levels are about a thousand time more than they were a few days ago and half of them I predict will become serious woodworkers and some may even earn their living from it sometime in the near future. Imagine that. Now that’s success. Another thing I am grateful for and ever conscious of is that seven of them came from distant countries. Even language didn’t separate the camaraderie that permeated the days and evening we spent together.