After the recent posts on sharpening, the first one really, I received comments and emails from people stating that the reason the stones were concave was because they were used for knife sharpening and not sharpening planes and chisels and such. That’s occasionally the case but the ones I am showing and referring to are sharpening stones used by woodworking craftsmen. I have seen and used stones just like these so my answer to this is short enough. It’s simple to tell the difference because of sawdust in the gaps and cracks and mixed with oil it’s pretty conclusive, but beyond that there are pressures and wear areas on the stones and the boxes that determine the reality too. Rest assured, across past millennia, honing stones have been eroded into concaved surfaces along their length by woodworkers of every kind. Most of them remained concave and were never ever flattened. Craftsmen kept them concaved and matched to their personal body movement merely as a matter of course. Why? Because flat stones are not so essential as people now believe. 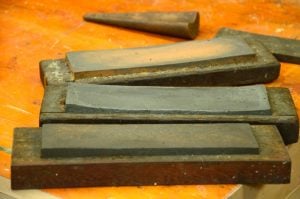 Are we discussing two different conditions or one and the same?

My quest to fill in the gaps of time between accountable hardware stores on main streets selling domestically made goods on a local level and catalog companies with delivery to the door I think may fall on stoney deaf ears, be subject to criticism or worse still be subjected to opinions that are little more than that, but I am hoping mostly not. You see, sharpening became intrinsic to me in my work and I ‘feel’ for the actual edges I want for each tool, which means I sharpen the edges to task and they are therefore not always the same edge. 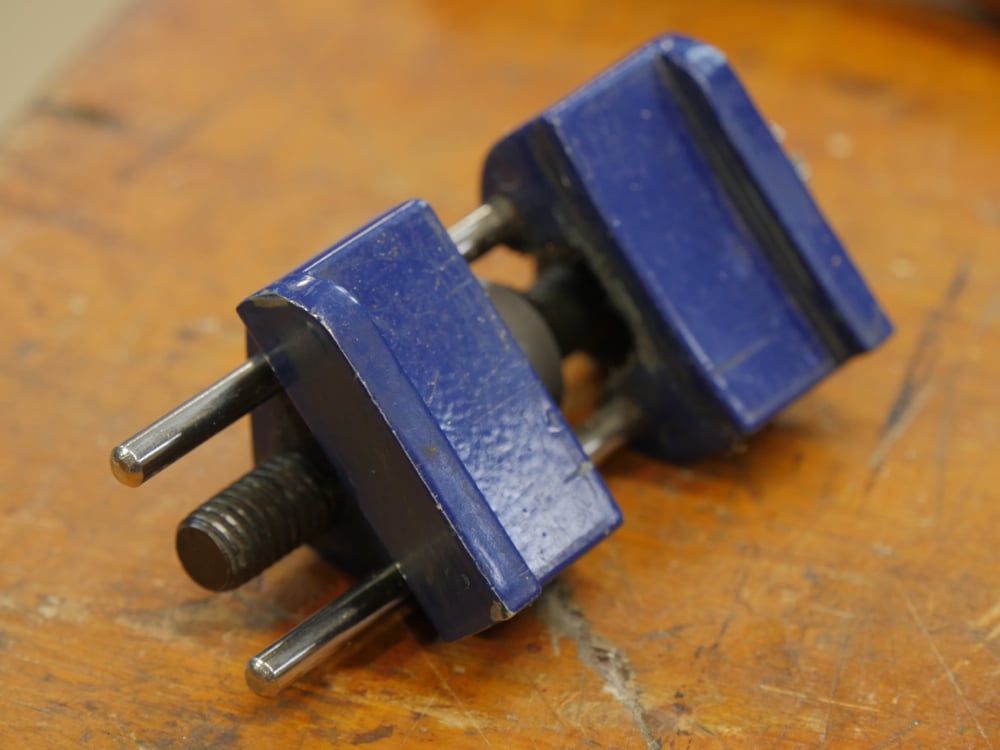 That’s the benefit of mastering freeform sharpening — freedom of choice. Where honing guides do create the same edge every time, I require differences for my work and one day you too may want a few differences to your cutting bevels and edges too. An example of this is steeper bevels with a convex that is more a blunter elliptical shape, or a shallower paring angle for hand pressure only. Instead of a rigidly fixed bevel for say a bevel-up plane iron I might want two extra swipes to increase the bevel 5 or 10 degrees for a particular grain or even a single stroke on the large flat face of a bevel-down plane to create a poor man’s ‘York’ pitch to deal with a patch of wild and awkward grain using either plane type. Mostly it’s all about a ‘flex’ I don’t get without freehand sharpening and it’s what we craftsmen do but don’t write about ‘cos we’re working and making and doing without necessarily trying to teach or even ask ourselves, “Now why did I just do that?”, so we can indeed pass it on. You see, as I’m working I ask myself these questions and then I investigate something I just do and take for granted so I can make sure what I’ve learned gets to other people, woodworkers, so it doesn’t die with me.

The stone’s shape need not be flat but it can be too. 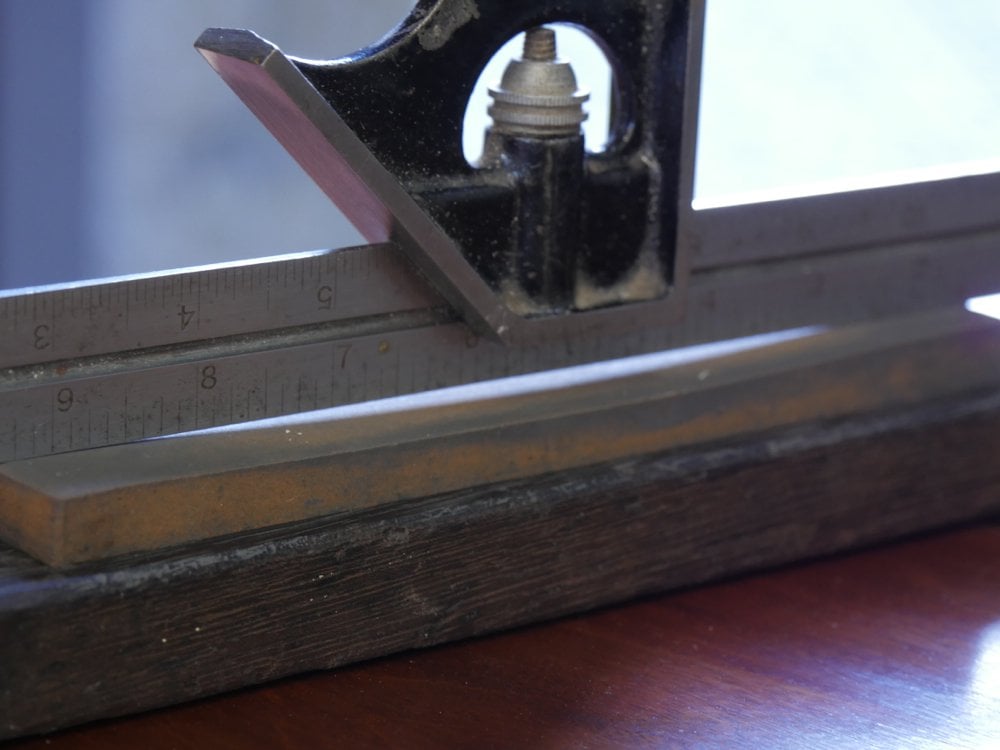 Is that dissidence in today’s age of advanced technical knowledge and superiority and the ever-advancing age of “The Opinion” or worse still “IMHO”? Looking back through the last half a century and more in which I lived it does seem to me that a development occurred in the 1980’s that really didn’t exist before and that development just about affected the whole world of woodworking sharpening unquestioningly. One, everyone and their dog began buying Japanese water stones rather than oilstones and two, everyone became obsessive about spending gobs of time flattening them and I do mean obsessively beyond question. A third dimension quickly happened unquestioningly and that was the abrasive giants saw that they could no longer live on their past complacencies. Western abrasive companies were indeed losing ground fast and could no longer sell their ‘old fashioned’ sharpening stones even though they actually worked just fine. The woodworking populace, and I mean the new home woodworker who worked wood for leisure and pleasure and not for profit, having little to base their experience on since the demise of men working with their hands was all but gone, was looking for answers to sharpening they could not garner from experienced workmen as they might in times past. It seemed that every magazine started featuring articles every few weeks on the newer Japanese water stones and suddenly the giant abraders of the industrial world had to break through with ever newer versions by creating their own versions of the Japanese stones. Hence the presence of friable stones that surface fracture so rapidly they need constant flattening and, get this, getting people to spend more time flattening than sharpening and more time doing both than they do actually working wood. You see water stones do indeed cut steel fast but they also wear super fast too. It’s a perfect symbiosis between manufacturer and seller. First create a perceived need and then come up with an answer. Consumerism perfected. Wear is wanted and so too is flattening and flattening stones and metal flattening blocks and additional equipment not the least of which is water baths and rotating stone carriers and so on. Try explaining all of this in a sharpening class and all of a sudden you, the teacher, are as confused as those trying to learn from you. Simply put, all you need is some kind of sharpening stone coarse enough to establish, restore or maintain a bevel, a medium stone to refine the coarser abrasions and then a finer stone to polish out the bevel. After that a strop of leather and some buffing compound and your on your way to arm shaving hairs.

Back to the question do stones need to be flat?

Generally no, but there are conditions here not the least of which is the fact that the condition of stones often varies quite drastically and even hollow stones that look the same are most often different. the stones are incidentally and shaped by the man to the man actually using the stones. In other words the arm/hand/upper body action coordinates differently with every person and this depends on many things including experience of the user, height in relation to bench, hand positioning and many more issues. How irons are presented to stones, that is presentation angles and such, creates a shape over time to the surface of the stone and almost always creates a hollow or concave. That is unless you are indeed experienced. These hollows and concaved surfaces then are a like a fingerprint to the worker using his and her sharpening stones. The hollows are all different and never quite the same. That’s why, unless you use diamond plates or dead flat surfaces, most non-casual woodworkers feel awkward suing someone else’s concaved sharpening stone.

Whereas we often see sharpening stones as merely more curved than hollow in reality, most whetstones are in fact dished with a formed hollow concave. We do indeed tend to use the terms hollow and concave interchangeably and though these are indeed generally the same condition, that is ‘dished’, the terms tend to describe something curved in two directions rather than curved in one direction only. The reality is that sharpening stones (as distinct from diamond plates that stay flat) naturally crumble throughout the process of sharpening. 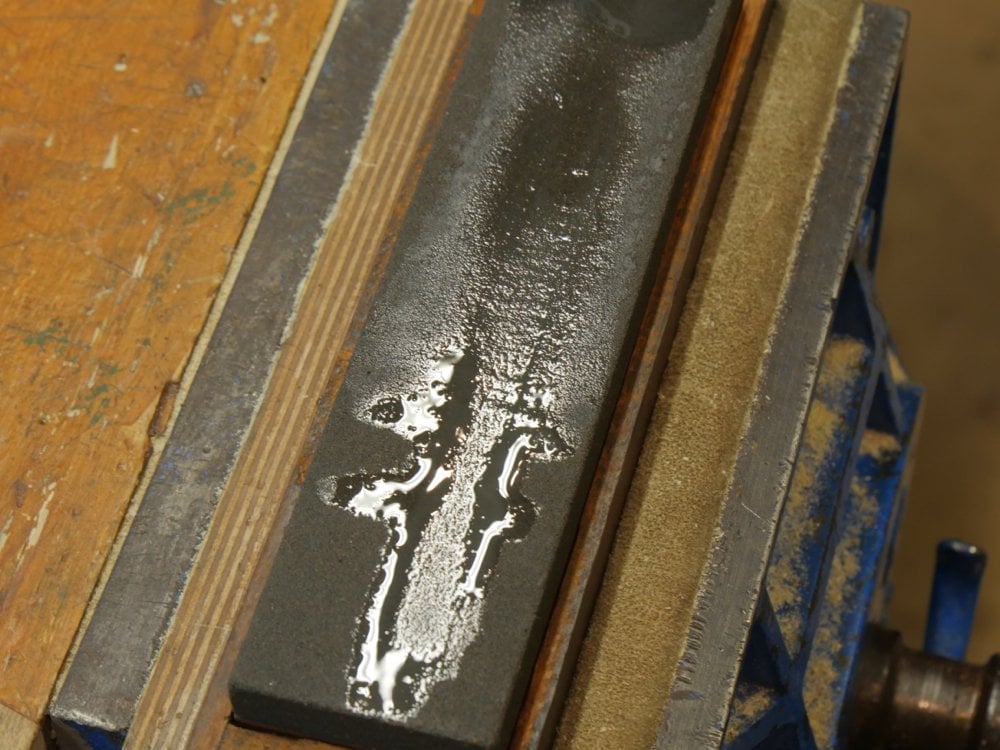 The results of such eroding is an uneven hollow in that a deep curve occurs along the length of the stone and then also a slighter curve across the narrower width though this is generally less detectable by eye but still present. I have generally found dished stones that dish in varying degrees and the comparisons show that no two stones are indeed alike. 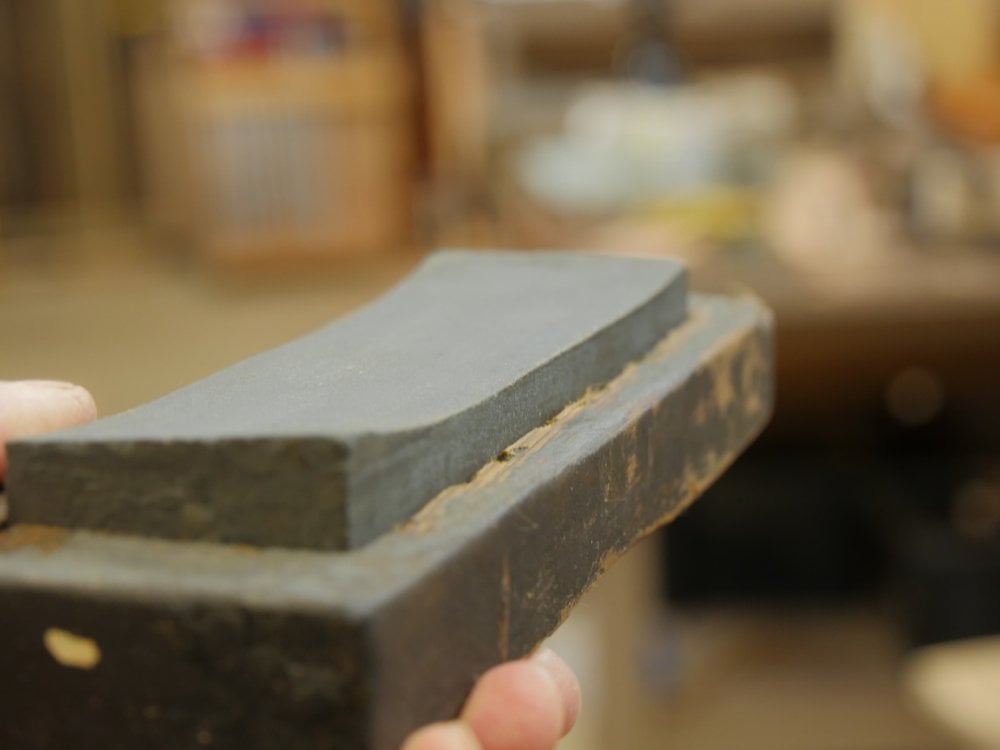 In the case of this stone the long hollow is 1/4” and 1/32” across the width. Sharpening on this particular stone creates a curved and cambered shape to the bevel of the cutting iron; the kind you might prefer for a gentler scrub plane iron. At the bench we might generally prefer a single directional curve along the length only and to avoid dishing as such. This is what I learned as a young man from the men I worked with. This has always been achievable intuitively and that’s how I managed to maintain the single curve in my stone surface for three decades. You see everyone selling stones and those having sharpened for only say a few years and periodically at that, see only one perspective and fail to consider the developed skill of the craftsman using the stones and the tools. Remember that I sharpen my tools throughout the day many times and have done so for the past 50 years. When we sharpen on honing stones we do not simply shove the irons and chisels back and forth in a machine-like movement but we flex the tool edges, the hands, the wrist the arms and the upper body to manipulate the tool’s edge to achieve specific results in forming a cutting edge. In the same long motions, instead of purely long mechanical strokes back and forth and parallel to the sides of the stone we often use elongated oval motions where the iron of wider blades like wide chisels and plane irons actually overhang the long edges. (Please remember that sharpening stones, especially natural ones, were rarely wider than 2” and irons were almost always wider, 2 – 2 1/2” wide,) so the irons were always skewed to the stones, never held in a honing guide and still hung over the edges of the stone even then. It’s by using long oval motions that we manage to keep to a single curve along the surface rather than actually ‘dishing’ the stone and creating a concaved hollow. How to pass this on is difficult, but I know at least for all of the stones I’ve worn through over the years they have always been flat across and curved evenly along the length. I survived with curved stone surfaces for three decades that way and never flattened the stones throughout those many years.

The jury is indeed still out though

The fact is that you really do not have to have flat stones or maintain flat stones and I hope to get to more detail on this in my next sharpening blog, which I think will show what really matters.