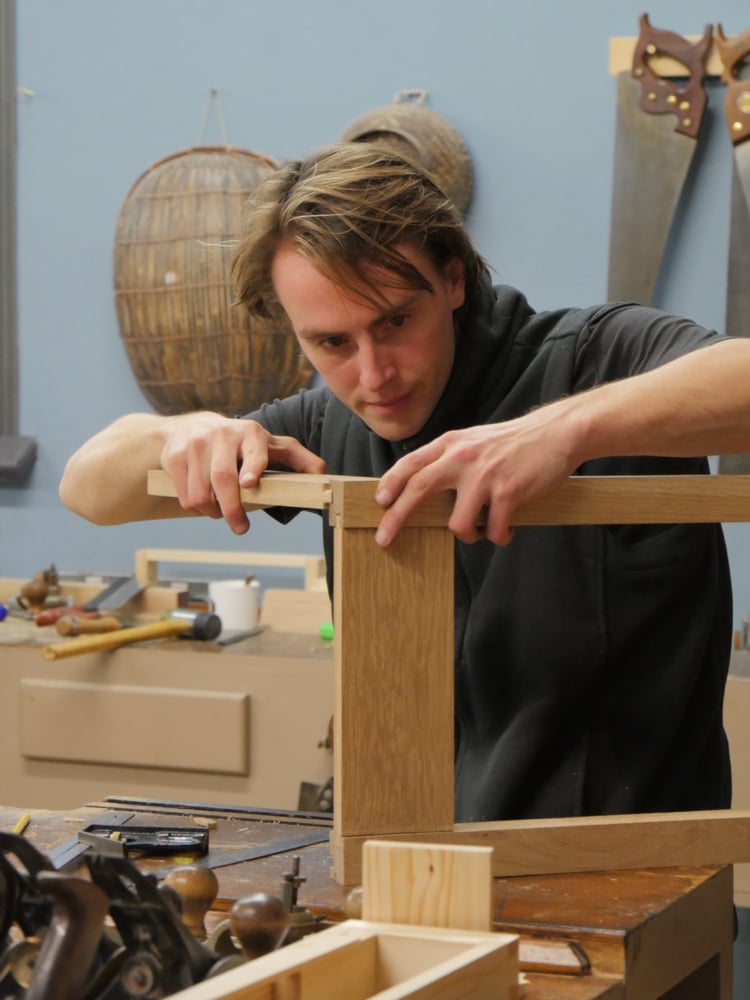 …Well let’s talk about the differences in real woodworking.

We began making tables last night. Our classes are very fully and very different in that we operate machine-free for all the nine days of the course. That means planing and sawing surfaces and making joinery so everyone develops real skill. Another difference I decided on 25 years ago was that, beyond basically cutting a couple of joints to break the ice, within an our or two our students begin their first fully dovetailed box replete with a lesson on proper hinge setting, bullnosing roundovers and such like that. I’ll photograph the joints from ten boxes, which for some if not most are their very first dovetail joints cut using hand methods. 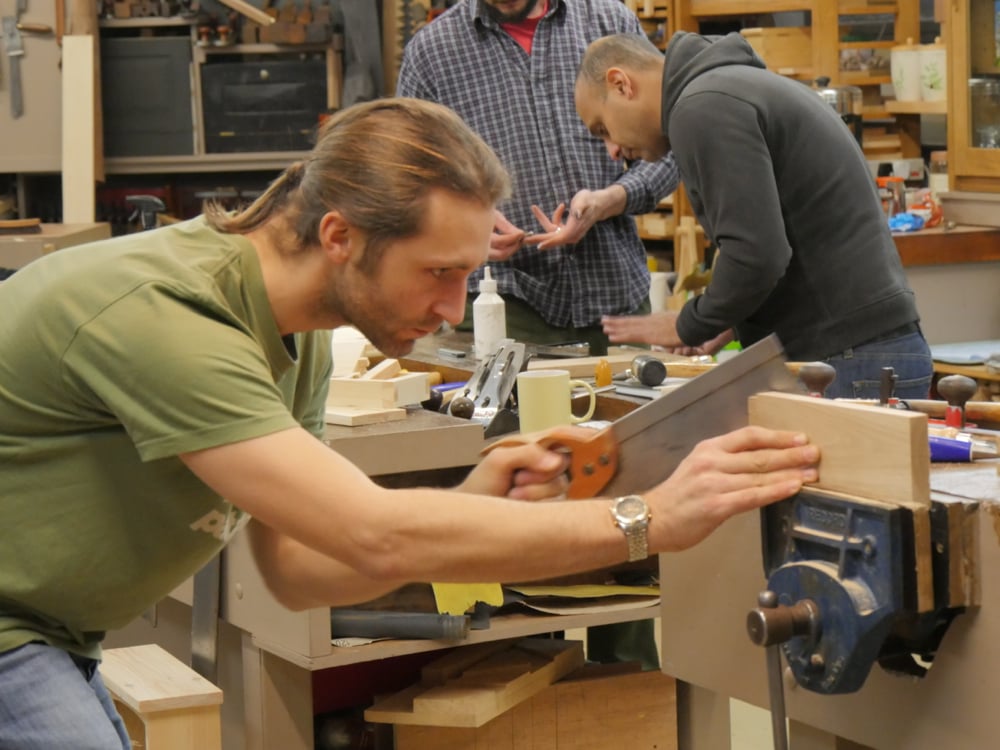 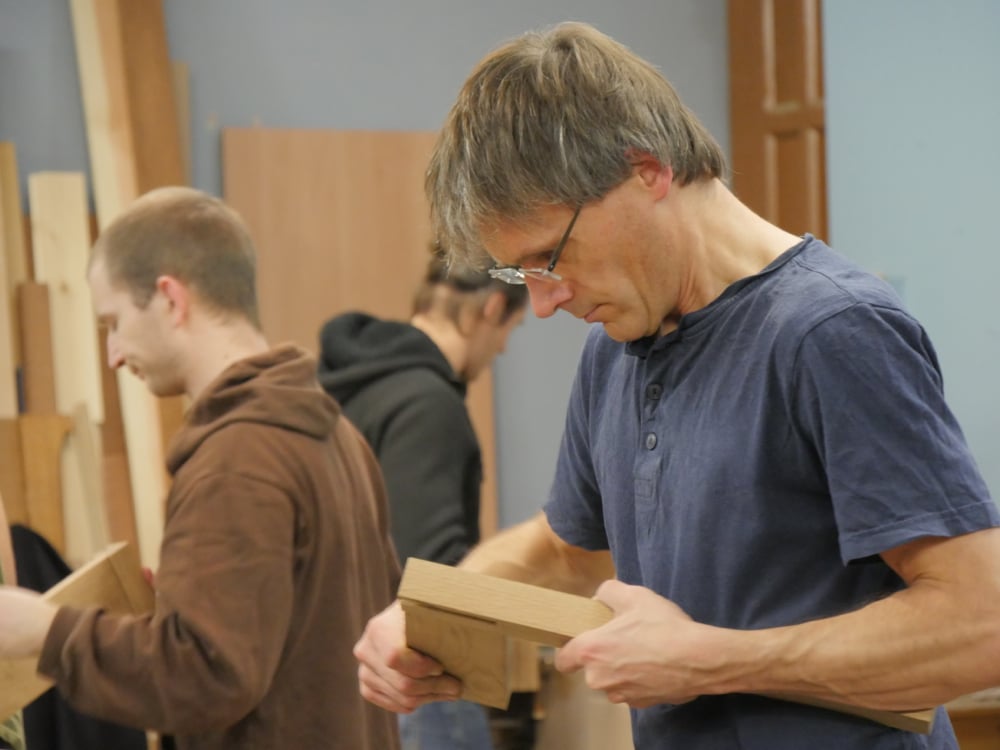 Most of my students never turned on a machine and have no desire to either. I think that that’s what has made us so very different. Probably 98% of our students, though from around the world, own no machines and never used them. Very different than say my experience the USA where walking into a wood craft store looking for woodworking instruction and guidance and walk out with a tablesaw, planer, drill press, mortise machine, router and a trailer load of accessories à la Norm mode. The difference does make things easy because they then start off on the right foot. We pretty much start a project right off the bat, suing the project as the vehicle for teaching. It’s fast and very effective and it’s worked for over 5,000 woodworkers who’ve been to my courses. 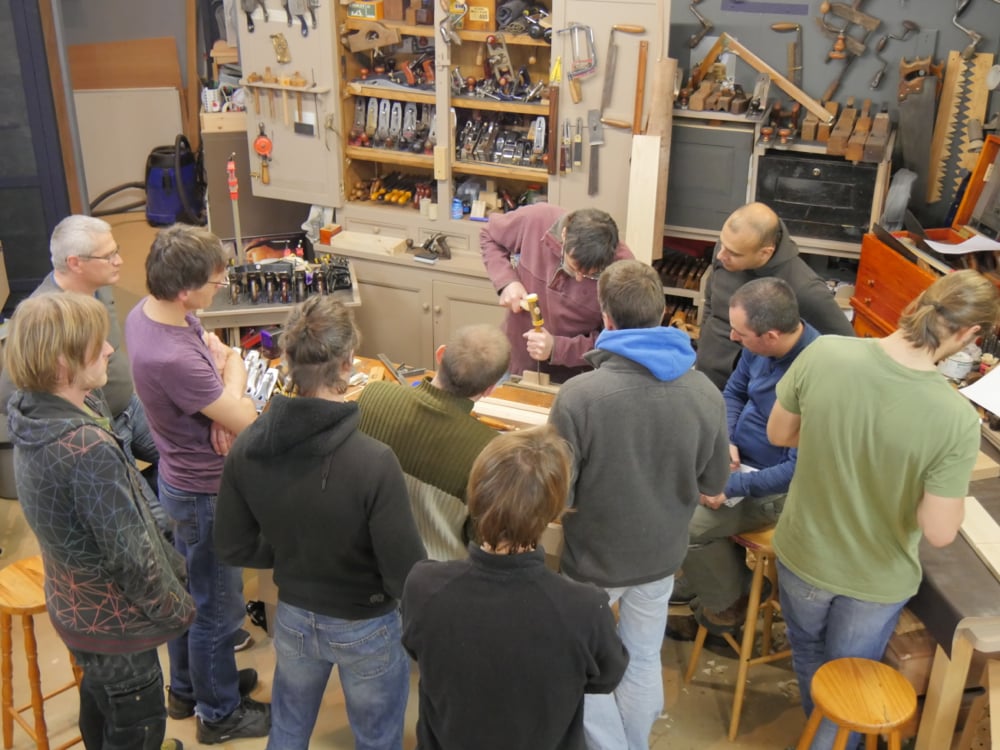 Gather in close and soak in the the shared experience of real woodworking.

As we discuss the issues of table making I relate my experiences in making tables and the issues seem less sterile that way. Anecdotes keep everyone interested, but it’s much more than that too. We discuss the whys and wherefores surrounding design, like why is a table never higher than so and so no matter the height of the person. What about aprons and tenon lengths and why are the tenons offset or internally mitred or half-lapped? What about the grain and the configuration, colour, growth rings, medullary rays and why do the medullary cause wood to separate? It’s all highly evocative and stimulates everyone to participate at the around-the-bench-sessions. How about ten different ways to chop a mortise or create a tenon with guaranteed accuracy and how do you get shoulders within a thou’ of the other every time? 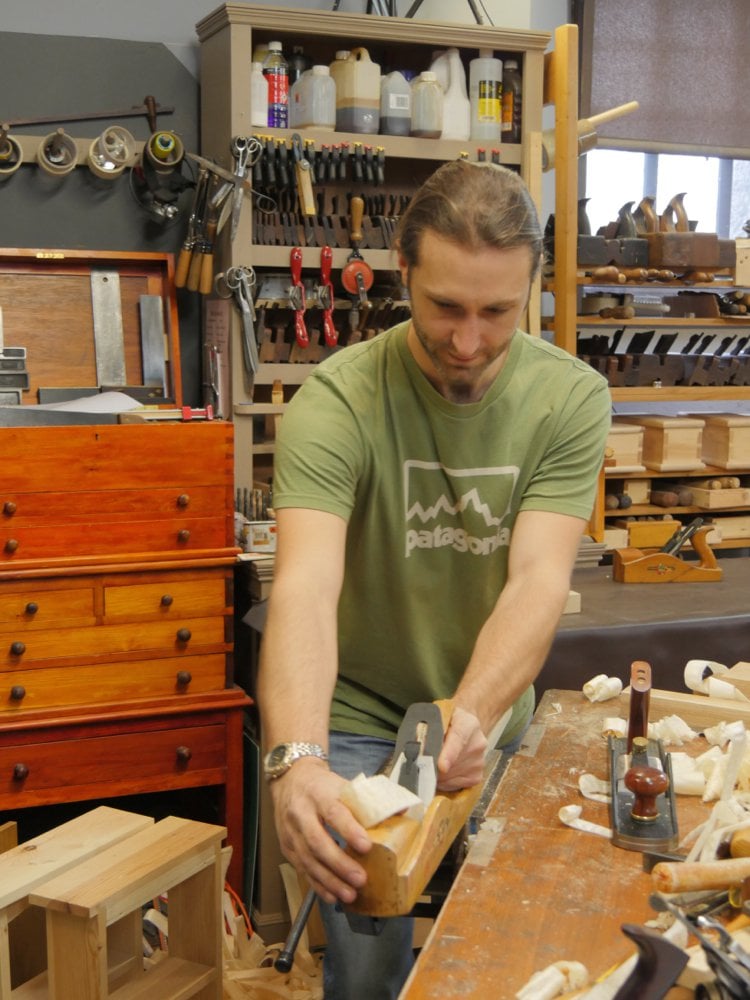 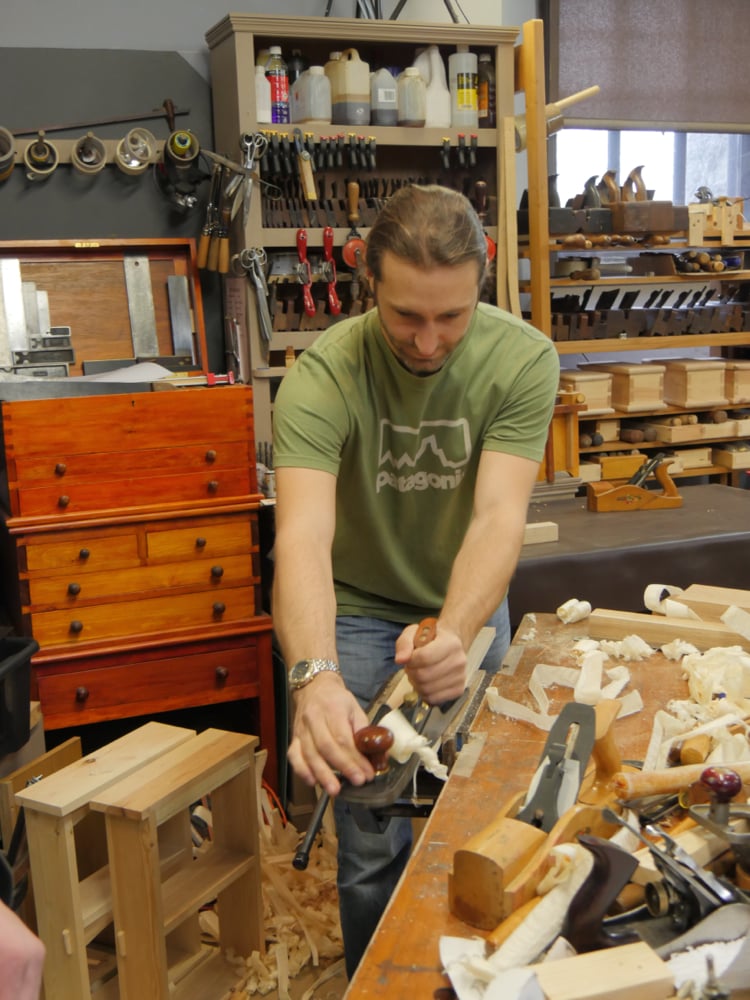 Then we digress a little…

I was amazed this week by the demographic difference between this class and the others I’ve taught as I blogged yesterday. Here’s one added bit of info I though was significant; of the eleven  in the class when we started last Saturday 5 were left handed. The world average for left handers is 10% so here we are at 45% with no left handed benches to offer them. But left-handers are great adapters and they never feel sorry for themselves so they just got on with life and enjoyed the class. It’s harder for me than you might think because I try to given a solution in the left handed language without really speaking it.

…And a Little more…

Someone commented recently about Clifton planes and the engineering standards of the planes Clifton make. I understood what they were concerned about but I do think Clifton planes are well engineered tools. I am often concerned though that planes made on three or four continents now are passing one another as ships and planes (pun intentional) in the night and I wonder how that happened. You now get US made planes made to almost identical standards as UK planes swapping countries and then you get Chinese ones coming in on the triangle to compete. I suppose the UK wants the US market as well as the UK and the US wants the UK market as well as the US. Then of course you have Chinese planes that are not made for the Chinese but for the Woodcraft or Dieter Schmidt customers and so on and so forth. Hard to imagine with German engineering being what it was that it doesn’t have a domestic maker beyond the lower-grade tools made by Kuntz. It’s the same with workbenches these days. Hard to imagine Swedish benches go around the world to woodworkers who buy their wooden workbenches and and so too we see the exchanges of ships in the night again as one US maker supplies a UK catalog and vice versa. It’s all very interesting this thing called global economy. I like the idea of making my own bench in the back garden and seeing it come together from some sticks bought at the local lumber yards. For me and many it’s become all the more real woodworking. 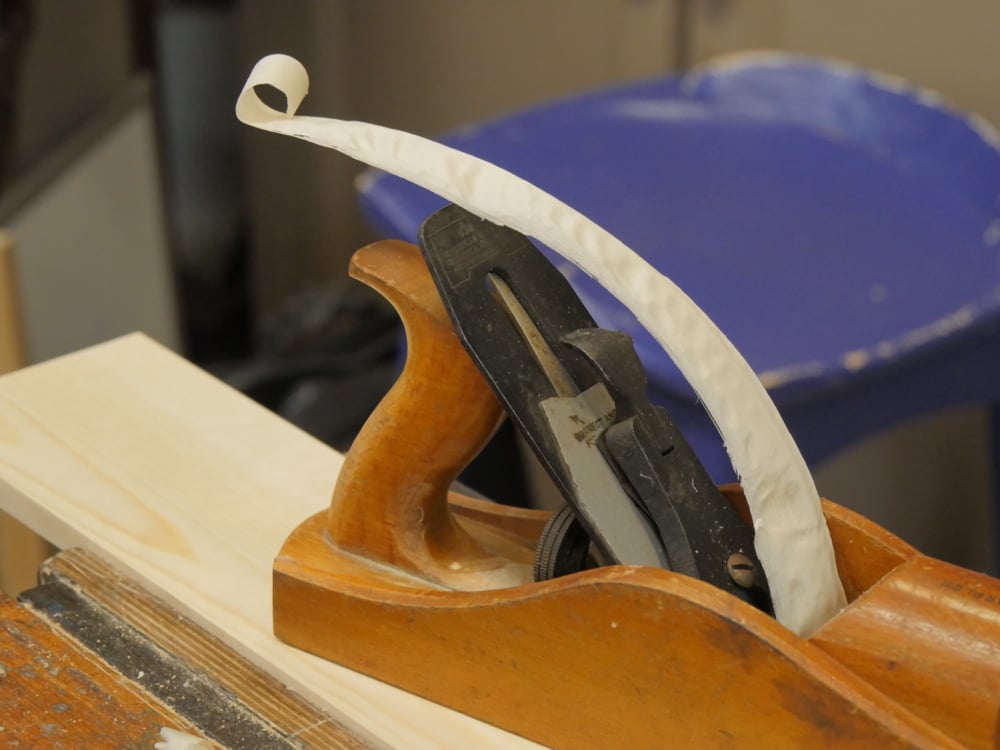 These two images show the drastic difference between shavings from wooden-bodied planes. 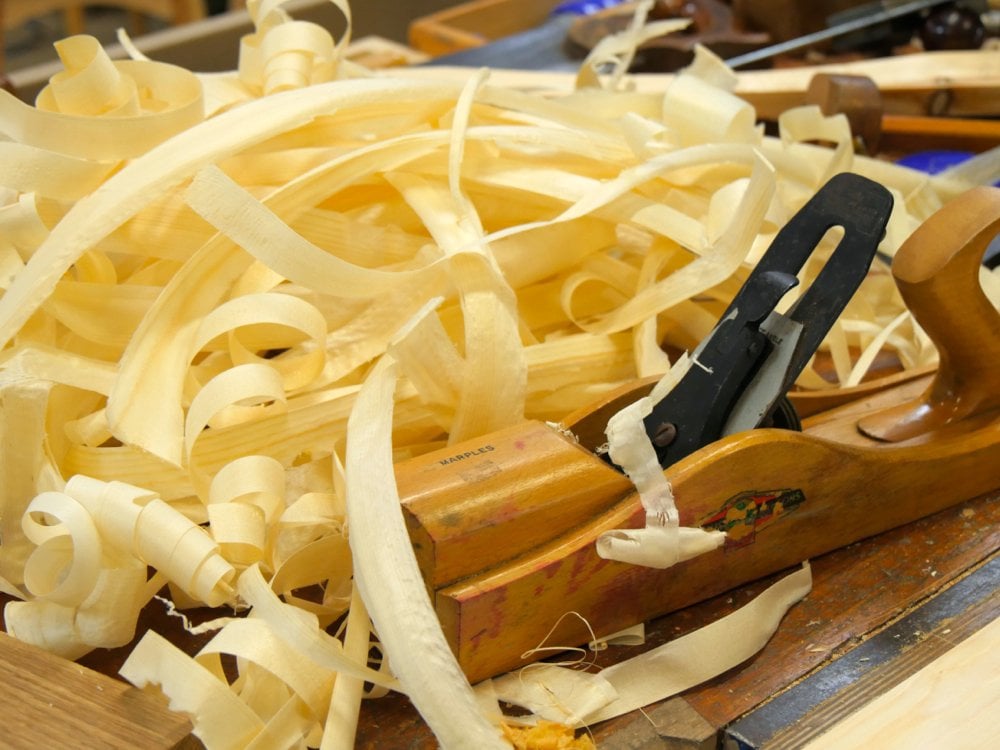 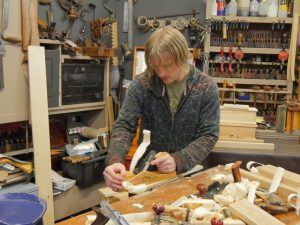 My students were stunned by the ease with which shavings came from the body of old planes like this. Just stunned!!! 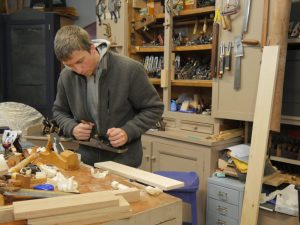 Side by side none of the metal bodied planes came close. 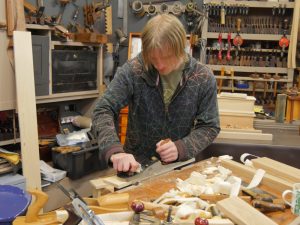 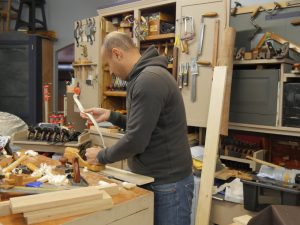 And of course we had fun

Today we tested two  planes after I set them up. A wooden-bodied jack, bevel-down, carbon steel, thin iron, 80-90 years old up alongside a new bevel-up, all metal thick ironed A2. Both freshly sharpened and an equal percentage of left and right-handed users in the testing of them both. The outcome was a resounding astonishment from the participants amazed at the ease and effectiveness of a bevel-down, thin ironed, wood-bodied plane. Does that mean one plane is better than the other? No! It means they’re different. They can be applied differently and it means perhaps we might ask why we have so few wooden planes.