I held my first class 25 years ago this month in Kerrville, Texas for the Texas Arts and Crafts Council at Steiner University. Five years later I had developed a program that subsequently trained over 5,500 individuals from around the world. Seeing what was missing in our modern world, it became a life quest to establish a viable working program for today’s woodworker, taking into consideration that cultural shifts have redefined what woodworking craft training is. I stepped outside of the mainstream and defied everyone who back then said it wouldn’t work and that it couldn’t work. 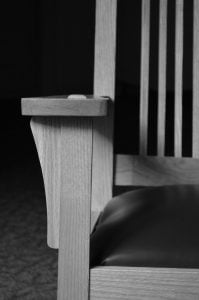 I wrote articles for half a dozen magazines totally about hand tool woodworking back then and before I knew it we were teaching thousands of woodworkers online and face to face. It’s hard to measure success, and not put a pound or a dollar sign on it, because people often can’t step outside of the paradigm of using money as the only means of gauging a successful venture, but I measure it by how satisfied I feel in my knowing that thousands of people have developed skills they once never thought possible and only dreamed of at best. I gauge whatever success I have gained from the emails we get, emails that say how much we’ve changed the lives of those who write.

Through the classes at New Legacy, people who often picked up a woodworking tool for the first time in their lives end up making this Craftsman-style rocking chair from scratch. 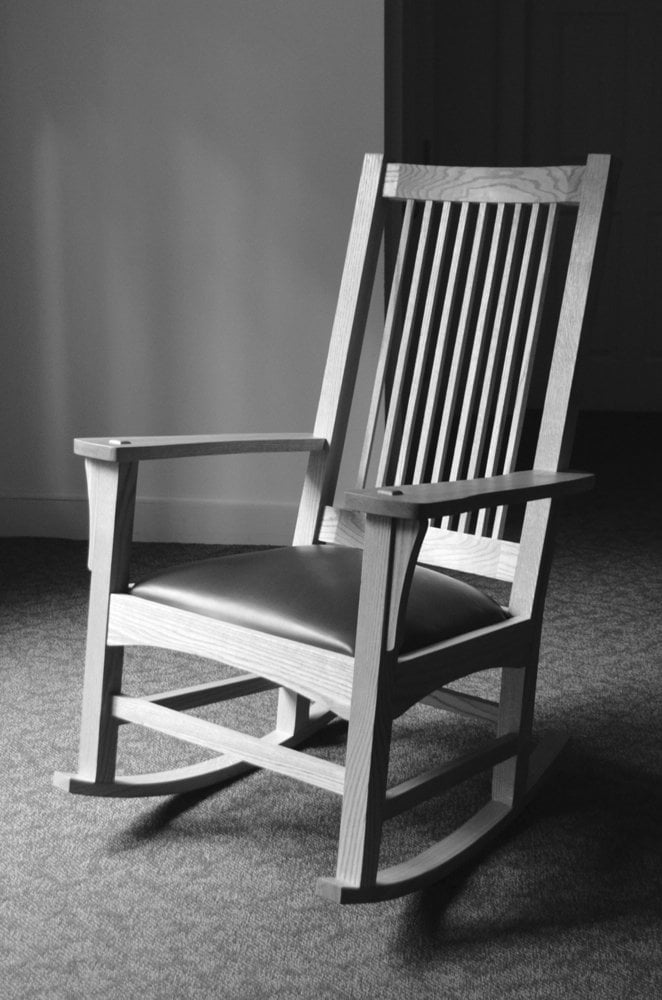 These photographs are of of the chair are of students work not mine. This one above is of a man who had only that.

They cut over 40 hand cut mortises and fit each of the tenons by hand. They hand plane every surface and shape the curved surfaces with spokeshaves and scrapers and then they upholster the seat in leather. They do it, not me. This is one of our follow up courses after completing the nine-day Foundational Woodworking Course. Imagine if you will that you never saw a saw or plane in your life and you sit in a chair like this after only 18 days of working wood; that you made it yourself using only your hands and and a handful of hand tools. Then imagine facing you is a dovetailed box, and a wall shelf and an oak table, all of which trained you to make the chair. 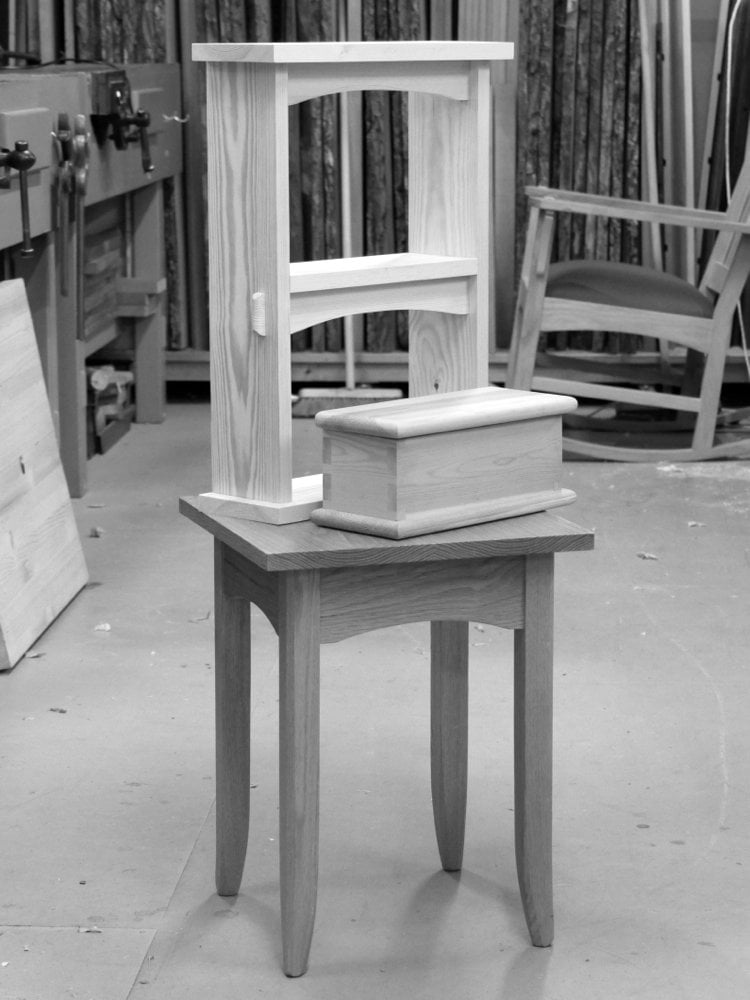 I am often asked why I do what I do.

That is why do I write, teach, make furniture, film all of these things that now surround me that mean so much to me, but also to others too. Some years ago I began to see what life was like growing your own food and raising chickens for eggs and meat and using this to teach and train my children the responsibilities of life. My first vegetable patch in 1991 was 3 feet by 10 feet long and soon doubled in size after we harvested our first tomatoes, onions and potatoes. We added squash and salad foods and before long, within a couple of years, we harvested from 80 tomato plants and three 80-foot rows of potatoes. Squash and string beans, cucumbers and peas where just a few of the fruits of our labours. With fresh eggs from 30 chickens and the meat from chickens we raised too, we edged ever closer to a simpler life and a transforming attitude toward the food we ate. 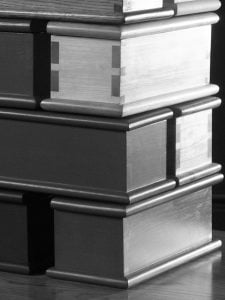 The baby steps we took in the beginning were critical to better understand the seasons and cycles of gardening. Miss some things by one day and a crop could be lost, too late, too dry and too much work to lose. Working within the seasons and the times that don’t belong to us became ever important even though a supermarket was but a few miles away. Yes, we could of course buy the food a failed crop might not yield, but the sense of defeat would be ever-present at the check out register. Doing such things yourself, DIY, if you take more to the reliance on growing the essentials of life rather than just the hobby level, declares a deeper quest for more the reality than a mere pastime. I came to a realisation then that this attitude of dependency could also be applied to other areas of life not the least of which was the life I was already living as a craftsman in wood. 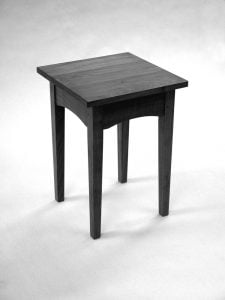 My work was a lifestyle of woodworking upon which my whole family depended on what I made to sell. And even though it was indeed a business, I knew that I saw my work differently than most anyone I knew and also of the men I ever worked with. I knew though that some of them, no more than two or three, did feel the same way I did. Like me they stopped now and then to look at the chisel slicing inside the wood, allowing the colours and the smells and the sights and the textures time to register in some channel of the brain and then to lock it there for some measure of deeper comfort. 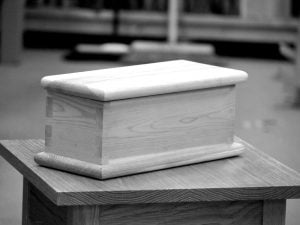 On the other hand there were the men I worked with who somehow managed to bruise life itself. Coarseness coursed through their veins and all that they did seemed to come from the face of a hammer with each hammer blow registered in every face of the wood they touched. The miscuts they made with saws and chisels were too many to number and the atmosphere surrounding them seemed always charged with anxiety and stress. Another small group of misfits were the non carers. These were the ones that were good at the work they did but they could take it or leave it. Living only for the weekends, television in the evenings and so on, by the time they were 50 they were already semiretired and had lost interest in any future work that to me grabbed my attention and my vision. 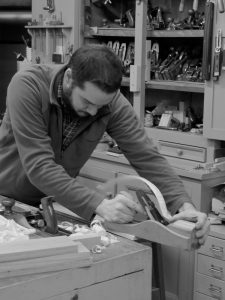 When I first began to teach and train others it came a long time before offering classes on a more structured level. I took in the waifs and strays along the way and worked with them to teach them an alternative reality. Mostly they stayed for a couple of years and built up their skills. Once skilled enough they left to set up their own shops with my encouragement and the craft I passed on to them was a passport to a new and self sustaining life of their own. They left and began selling their work. They built their own shops and sold similar pieces to mine, used my designs until they could design their own and became independent in their own right. For some though it became more the pursuit of wealth and prosperity rather than the simpler lifestyle I preferred. What they learned to do with their hands and became good at they adapted to the machine and became the slave to. It wasn’t that they couldn’t make a decent living from hand work but that somewhere along the way the quest for money became all the more important. It’s a funny thing though because it seemed to me they were never satisfied; they never quite made enough.

You see, seeing the different associations and relationships that people partner with, what inevitably happens is the money becomes central, even takes over, and we leave the lifestyle bit, the real bit, the important bit behind. Soon that translates into dust masks and dust extractors, ear protection and supply and demand. Competitiveness becomes the driving force and before long we find our love for working wood diminished. Though sometimes I failed, I have always avoided this because when you can’t stop, when your breath becomes shallow, when your heart loses its rhythm, when you can’t think for yourself, well, you soon lose the very reason you began woodworking for in the beginning. 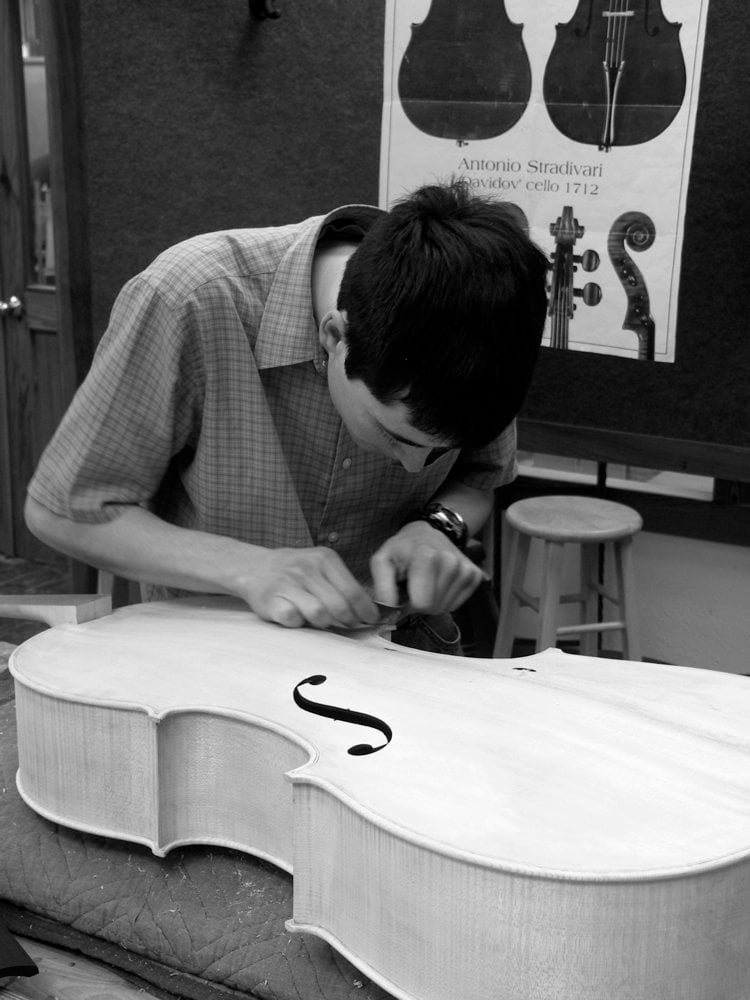 There are those who do everything for money, right from the get go. They think of nothing else and measure their success by how much they make in a year and not the lifestyle they live. Mostly they’re people who sell things all the time. What they make is nothing more than what they sell. Nothing wrong with that, but that’s different than the way of life I chose. The reason I do what I do is to help people to add a dynamic to their lives they otherwise might not find. It’s lifestyle part- or full-time and it’s working. 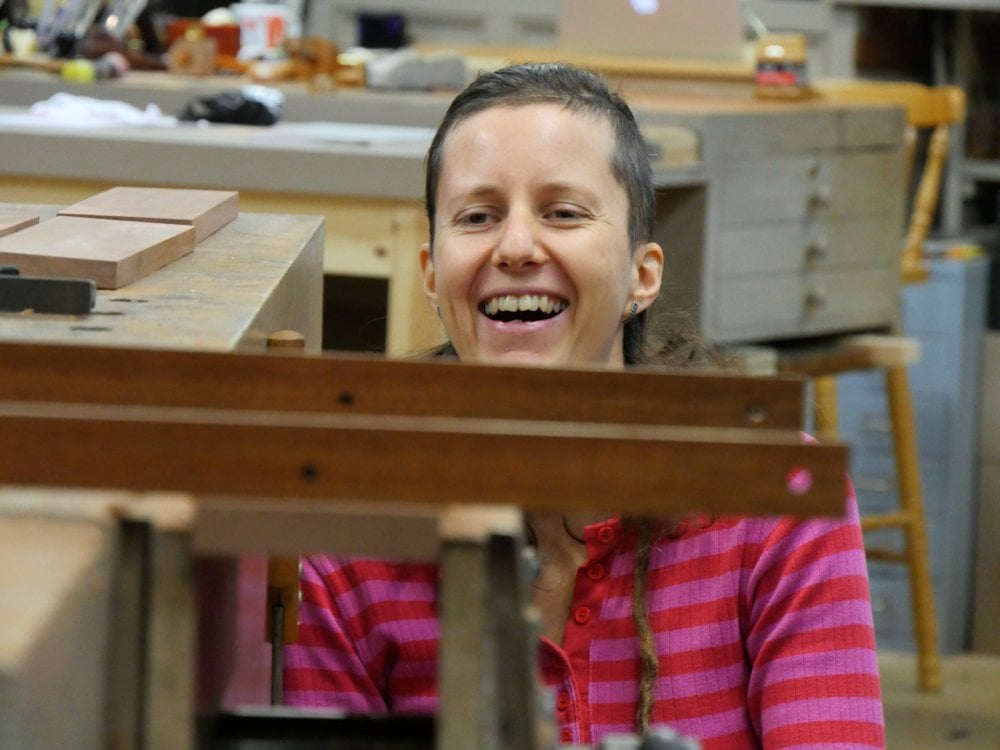 I think it’s true that not everyone can make a living from woodworking, but you know, they can gain the skills that far surpass those of many calling themselves masters and time served. Most of those who follow my blog and my videos, those who write me every day, tell me that their love for woodworking transformed their lives when they began working with hand tools. I knew it would. Those that come to the woodworking school from all around the world are told in the first hour that my goal, my ambition, is to change their lives. I think that 90% plus of them let me know during or after the class that their lives have been changed. Now that I am the age that I am, I measure my success differently. Pulling people off the conveyor belt called life even for a small amount of time has become all the more important. Even this blog has totally changed thousands of people’s lives. People I have never met and never will. 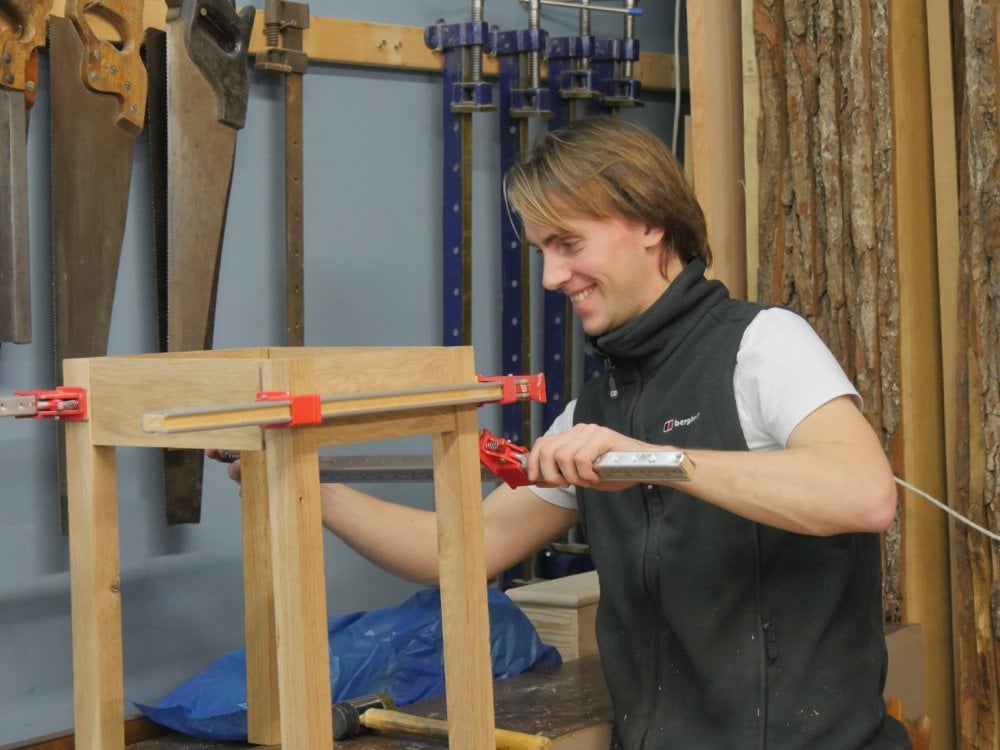 So this morning, in a few short hours, when I wake up I will be thinking of you all. I will meet Sam and Lea and they will make yet another new project to stretch them and expand them. This will be Sam’s sixth in four days and Lea’s, well I have lost track. She has made a tool chest and a coffee table and a rocking chair already. Their lives are being transformed by renewing the way they think. I think this is close to stupendous. I love watching them grow, listening to their questions just as I did my children through their early life in the shop with me every day for two decades. It never stops when you have a burden.

25 thoughts on “Looking back 25 Years and beyond”