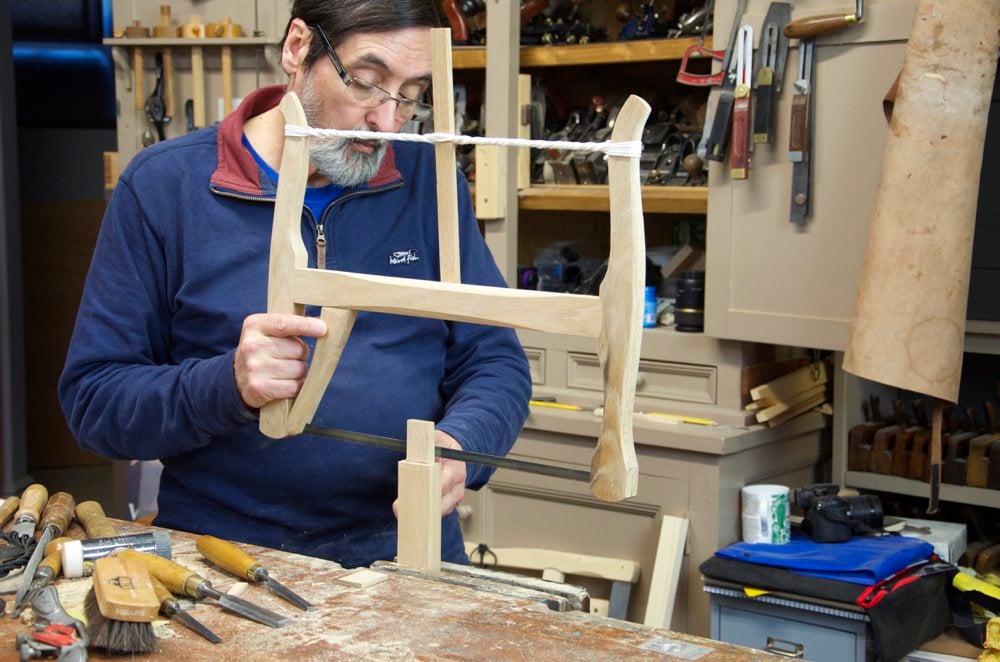 I recently progressed the videos on making different types of frame saw using different ingredients to maximise performance. Visitors stopped by over the days I was working and we were filming and they saw the saws in progress and indeed being used. One man asked my why Europeans didn’t adopt the English tenon saw for their joinery work, inferring this was the improved and better model. Of course in Britain too we had frame saws dating to the middle of the last millennia. Something shifted in the 1700’s when woodworkers transitioned from thinner and narrow blades to wider plate sheet steel and then the addition of the folded spline that pinched the steel and enabled the plate to be straightened by tension. 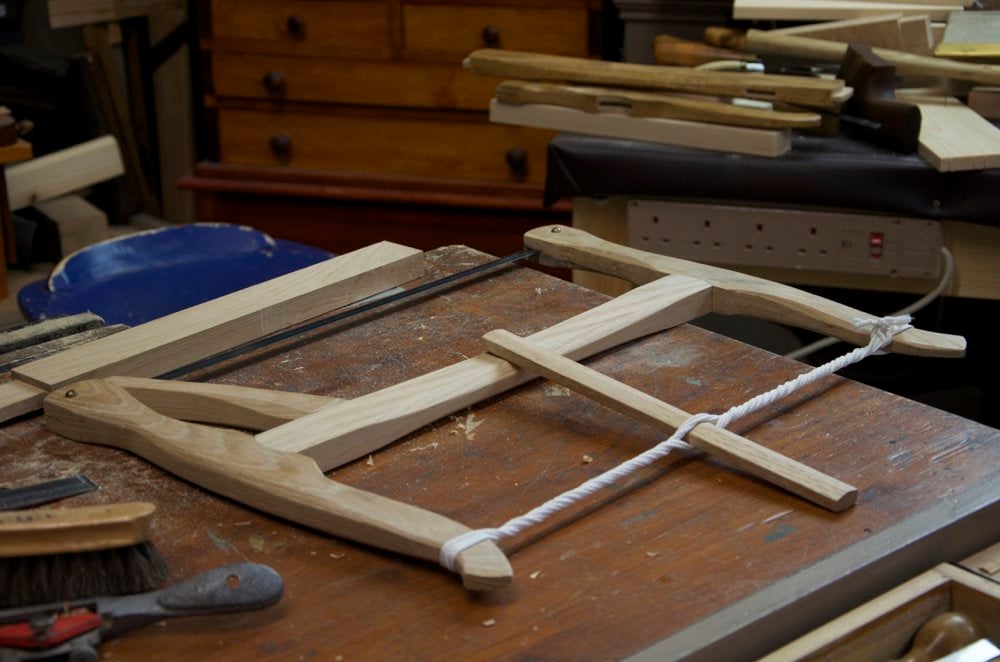 The progress we made was to introduce a new joint connecting the cross beam to the handles. I did this a few years ago now and have actually used my frame saw on a regular basis. I use it as what I think is the very best metal cutting saw I have ever used. Why do I say metal cutting saw rather than ‘hack’ saw. Well, it doesn’t operate at all like a hacksaw. It’s smooth cutting and it eases through the steel and brass like the proverbial hot knife through butter. I also get double the length of useable blade and, so, long even strokes that are magic.

I have seen toggles and thumbscrews but never liked the look and feel of them and so I retained the toggle and the string method which I find works great. Wood absorbs some of the vibration you get with frame saws but tensioning is key to tensity in the sense of stretch.

The questioner, as with many Brits, assumed that the frames was simply the undeveloped former state of unevolved saws and backsaws were the ultra level of development. I say as with many Brits because the men I apprentice and worked with dismissed frame saws as being European and unBritish.

Of course I am looking at these saws a little differently. All of the frame saws commonly available have the ability to turn the blade on its long axis and are often called turning saws. These saws are very different to the traditional bowsaws refined as saws for curved work which were never used for joinery but tighter curved work, arches and remove of waste between twin and double tenons. So it’s important here to look at things through different glasses. Frame saws are indeed good for joinery. They do other tasks including ripcutting, crosscutting and turning, and this depends on the width of the blade used, but for me here and now I want to simply present the frame saw as a joinery saw. In answering the questioner I took the saw and cut these tails for a dovetail by eye and without layout. I then cut a tenon replete with for sides and four shoulders and the same saw with the same blade gave me pristine surfaces that actually looked like a finely tuned bandsaw had cut the facets. I crosscut the shoulders with equal alacrity. So herein is the simplicity of it all. The bow saw is the least expensive saw you can use that gives at least comparable results to the more high developed tenon saw range and you can use one blade for everything without compromise. There are a few refinements you must do to make them work but this revolves around the blade and the teeth and not the frames itself. You really don’t need any turning capacity for any joinery practice so a simple saw kerf and a pin through holds the blade perfectly aligned. If someone makes one of these the cost per saw is under £3 including the blade depending on whether you use scraps of pine or some hardwood. Even if you buy decent hardwood the cost is still a fraction of a tenon saw cost.

I really have enjoyed owning one of these and especially so as a hacksaw. I have two finer toothed blades I use and of course I can interchange two or three beams to alter the length of the saw and the blade. So, I will advise when the videos are up on how to make both the simple frame saw and the fancier model. I think you will love these.

More in this and the making of them soon, very soon.

Have a nice weekend everyone!

43 thoughts on “Frame saw or bow saw, what’s the difference?”