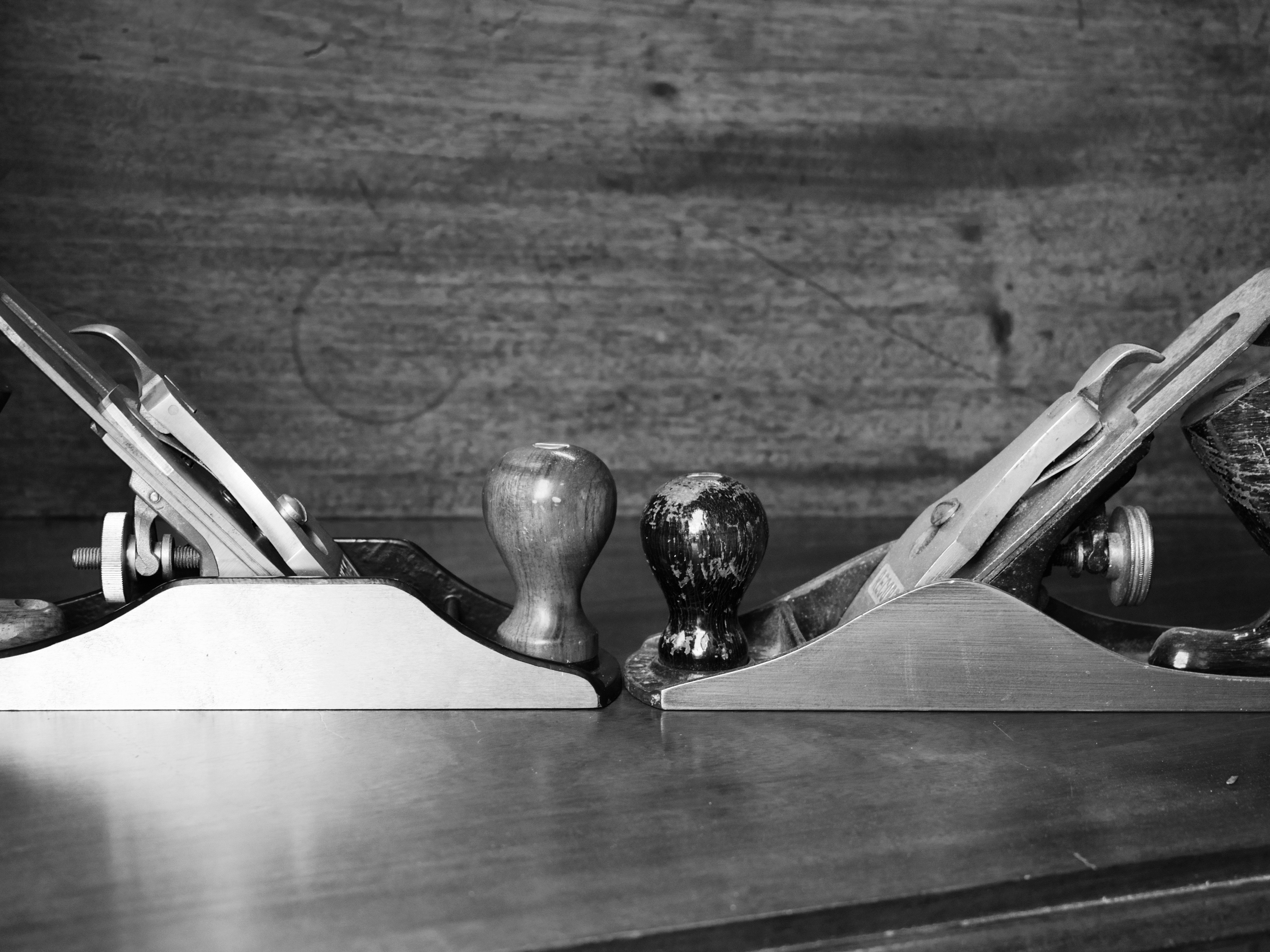 I have addressed some of the issues surrounding the differences between the Bailey-pattern cutting iron assembly and adjustment and the Bed Rock type. Obviously this surrounds the entire frog of both units. All adjustment is anchored solidly to this central hub so critical to the two plane types that were originally made as production lines by the Stanley Rule & Level Company in the USA back in the late 1800’s. 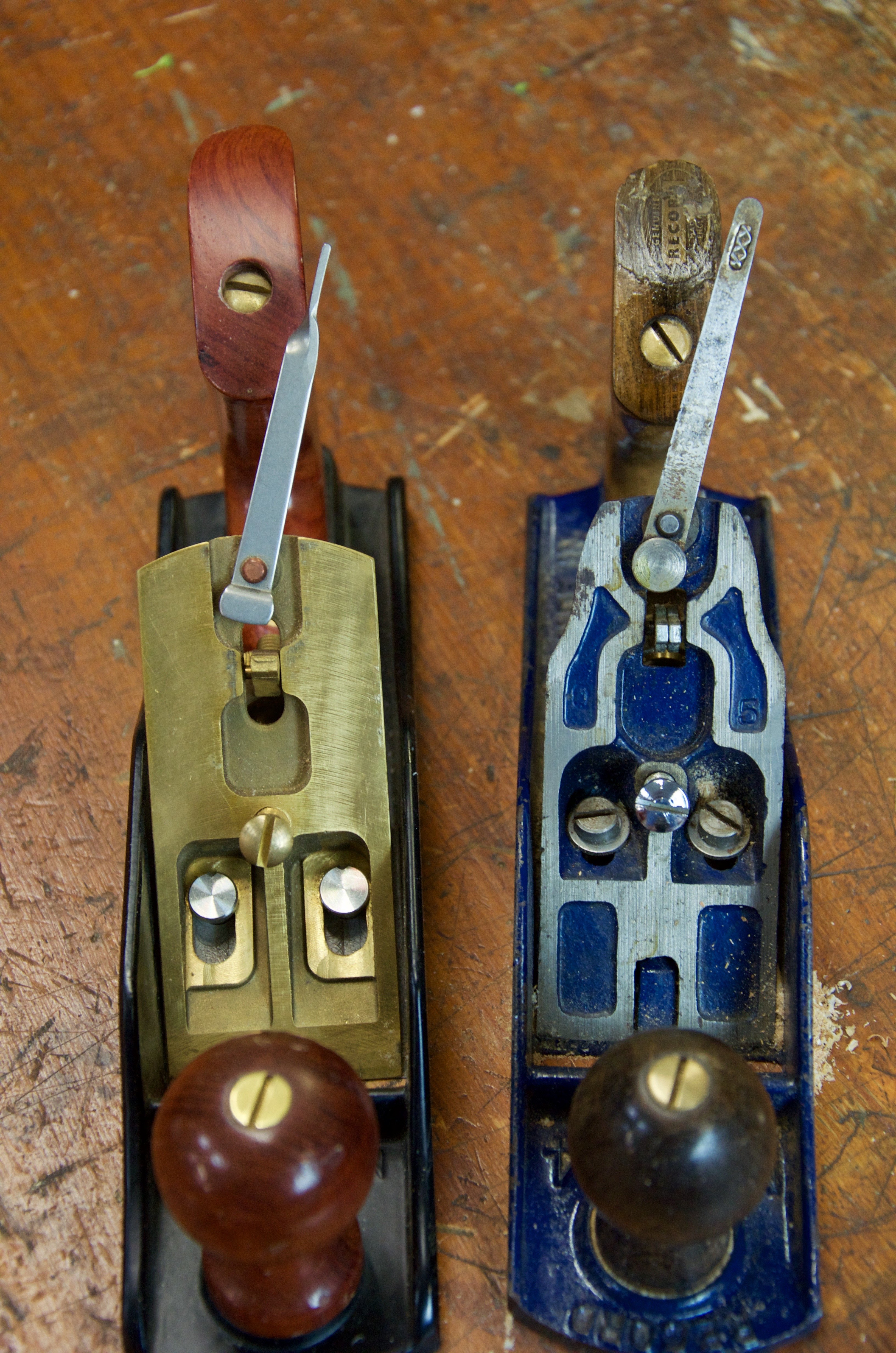 The cast metal frog on each model holds the entire cutting iron assembly comprising both cutting and cap irons and also, when fitted, the lateral adjustment lever, the depth adjustment knob and the frog itself, the purpose of which is to adjust the frog back and forth in relation to the fore part of the plane’s sole. It’s this adjustment capability that alters the narrow opening across the plane’s sole between the very cutting edge of the iron and the front aspect to the plane’s sole. I want to address it from my perspective as a free agent and a free craftsman taking no sponsorship from tool makers, catalog companies and so on, and one who never sells new planes (but perhaps an odd older plane to a desperate student perhaps once every two years).

My experience with the two types

Of course I have used both plane types as #4 and #4 1/2 versions in my daily woodworking over my 50 years as a full-time woodworker. Every day I’ve reached for one or another of the bench planes dozens of times an hour and this of course includes the ever-famous Bailey pattern and the lesser used Bed Rock patterns, both of which were made by Stanley and nowadays all of the other modern makers that copied Stanley’s original regardless of the original designers. The contrasts between the two model types have brought up different issues that are rarely spoken of but are important to a working knowledge of the planes in functionality and use and because they’d affect the plane’s performance in different ways.

Two frogs in the throat

Hopefully you will now understand that the two frogs of the Bailey and Bed Rock types are remarkably different even though their primary functions are actually identical. That said, both frogs function quite differently but only in the single factor of opening and closing down the gap forming the throat; so differently one must ask the question, just what is it that makes the difference and what are the actual differences?

Regardless of the plane type, a frog too tight in the throat leads quickly to choking if the depth of cut is even a fraction too much or the cap iron is set too tight (close) to the cutting edge chokes easily no matter the type. 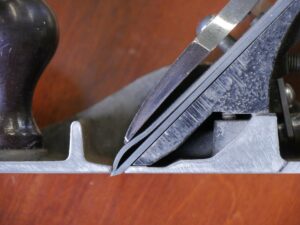 These things affect the flow of shavings through the throat. Also, another element that can affect this free passage of shavings is if the lateral adjustment miss-sets the iron askew. That is, if the frog is miss-set slightly out of parallel then the alignment of the cutting edge becomes difficult. Both frogs can indeed be easily miss-set so always watch for that. Setting frogs parallel is a sighting issue and not scientifically measured as such, so a good eye is relied on with both frogs

What frogs are good for

Both frogs work close to equally well, and do what they are designed for. Lets look briefly at the things that the frogs do identically and then consider the interrelationships we still rely on afterwards. First of all it’s worth reiterating here that the frog holds the key elements surrounding every physical aspect of the adjustments of the plane. We must understand that this is fact. Here are the functions of the plane frog:

Two: The frog itself allows the closing and opening of the throat.

This being fact, let’s look at these functions:

The lateral adjustment lever to each plane aligns the blade to the sole in identical manner and therefore operate the same way. Tilt the lever to one side and the blade pivots near the centre canting the blade in the opposite direction at the cutting edge to align it parallel to the plane’s sole. Depending on the manufacturer, they are basically made the same way and there is little more to be said on this point.

The depth of cut controlled by the adjustment wheel is also identically arranged and needs no more consideration right now. Turn the wheel clockwise and you advance the cutter down into and through the mouth for a deeper cut. Reverse this and the iron comes back up and so you have thinner shavings with the shallower set of the iron. 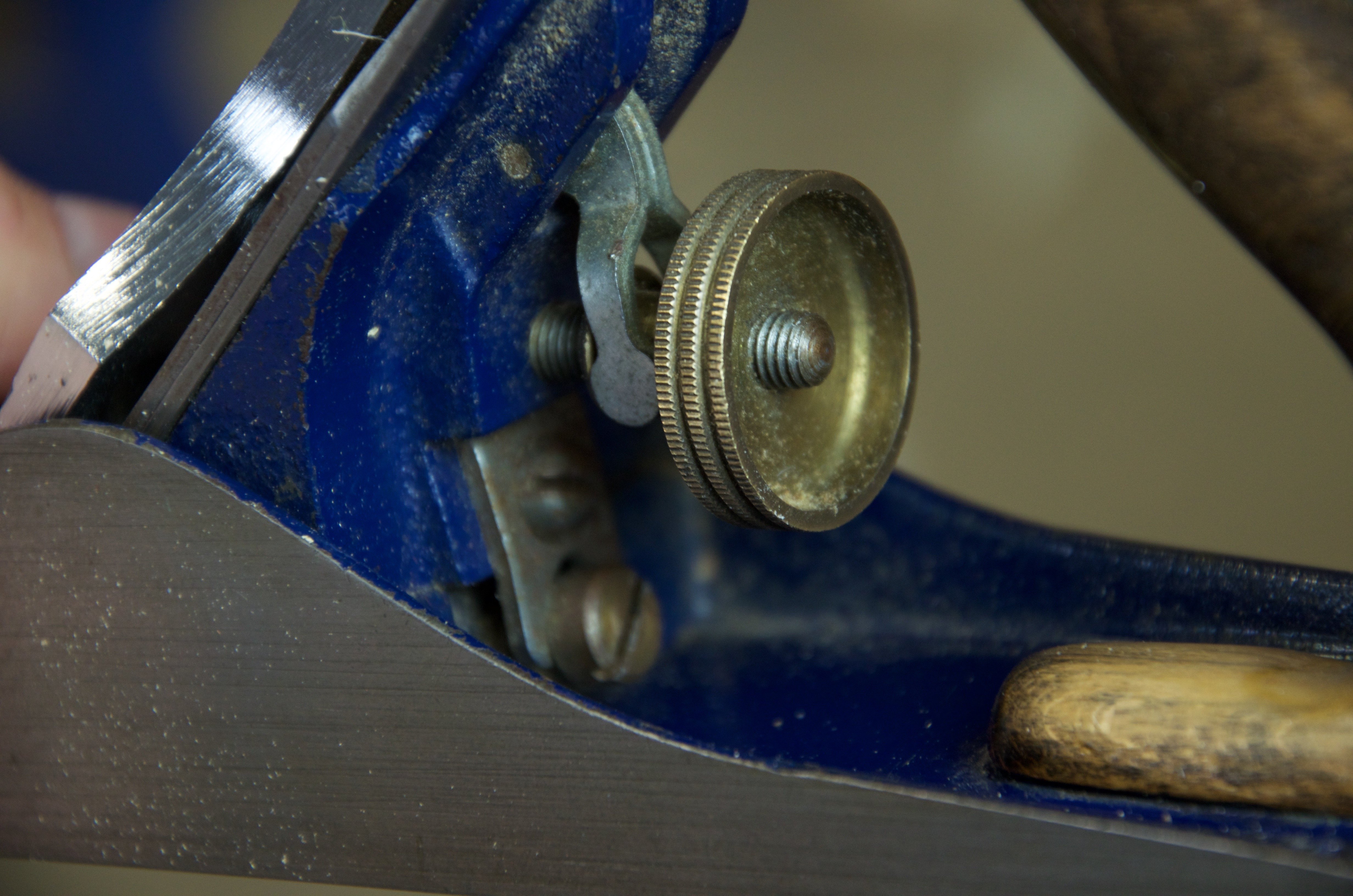 The only remaining adjustment then is the distance between the cutting edge of the plane iron cutting edge and the front portion of the sole. 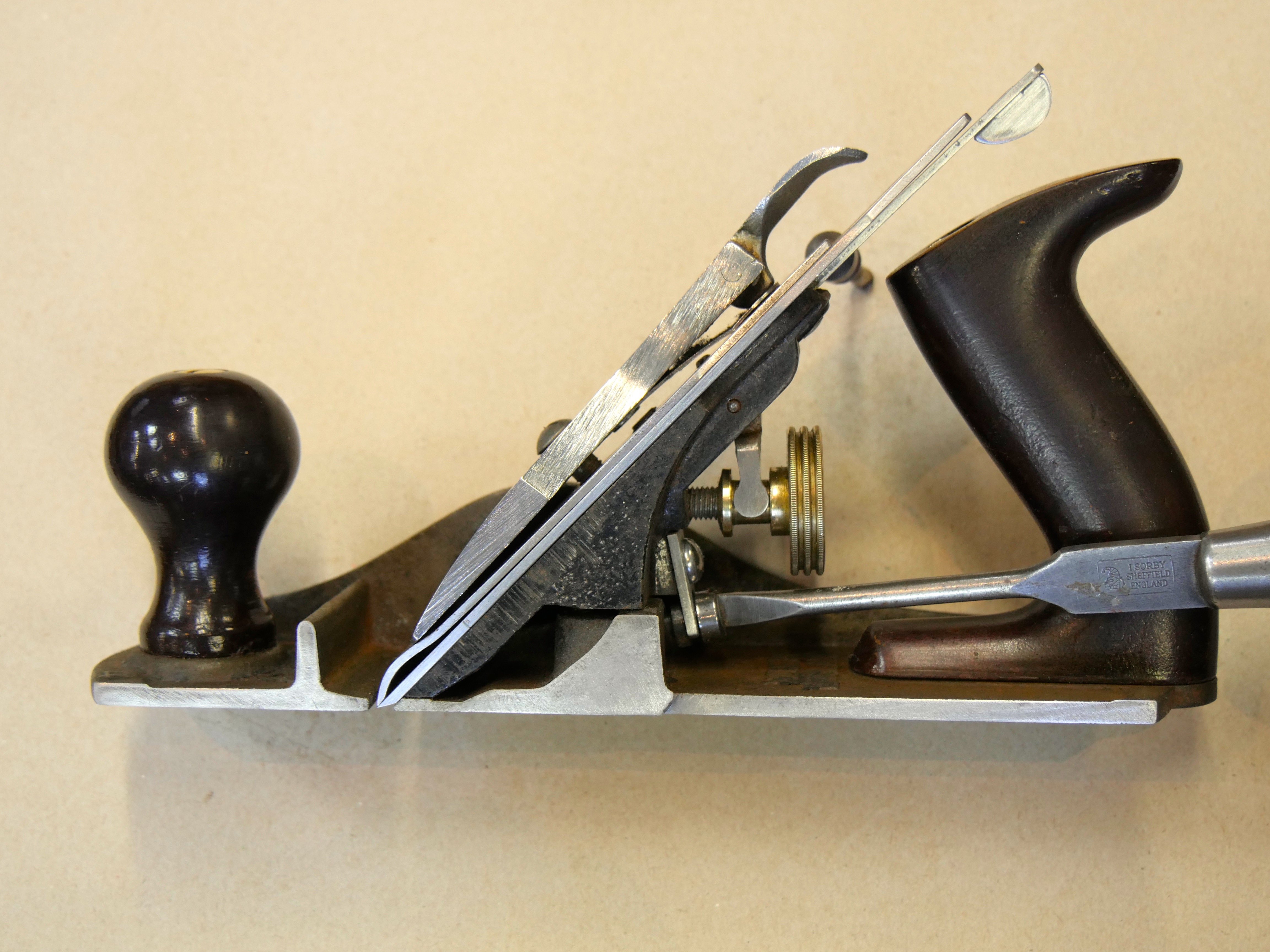 More than just the throat opening

So now at last we see and understand that there’s more to the frog than just throat openings. Understandably so, I think any new woodworker can be forgiven for thinking the frog only moves backwards and forwards to open and close the throat when in fact it’s other equally important function is to carry the adjustment mechanisms. The frog’s function is to indeed multitask; in relation to the lateral adjustment and the depth control knob, the throat opening control in terms of essentiality and functionality is generally quite minimal. Why do I say that? Well, let me open things up in the day to day work of a practicing craftsman.

Life in the real—real workbench woodworking

In the day to day of woodworking and making at the bench most hand tool woodworkers use wood they have picked through carefully for grain type and grain orientation, knowing that every surface must be hand planed for perfection to exist and then, further, to be ready for joint making, fitting, trimming and finishing. Most wild grained wood is mostly avoided except for decoration because it’s hard to find good balance and so this wood type is scarce, even rare and not normal. In other words flamboyant grain used in furniture can be less desirous except perhaps as a decorative element limited in parts to the whole.In the real world of being a furniture maker we look for something very different that brings full balance to the work. We look for grain types that are perhaps more even in pattern and colour. Configuration and matching is indeed an art in and of itself. Mismatch here and you end up with a piece that doesn’t sell. If one chair is too figured and the others less then the chair creates an imbalance with its brothers and sisters. That being the case, we’re looking for something very much more normal to work with. 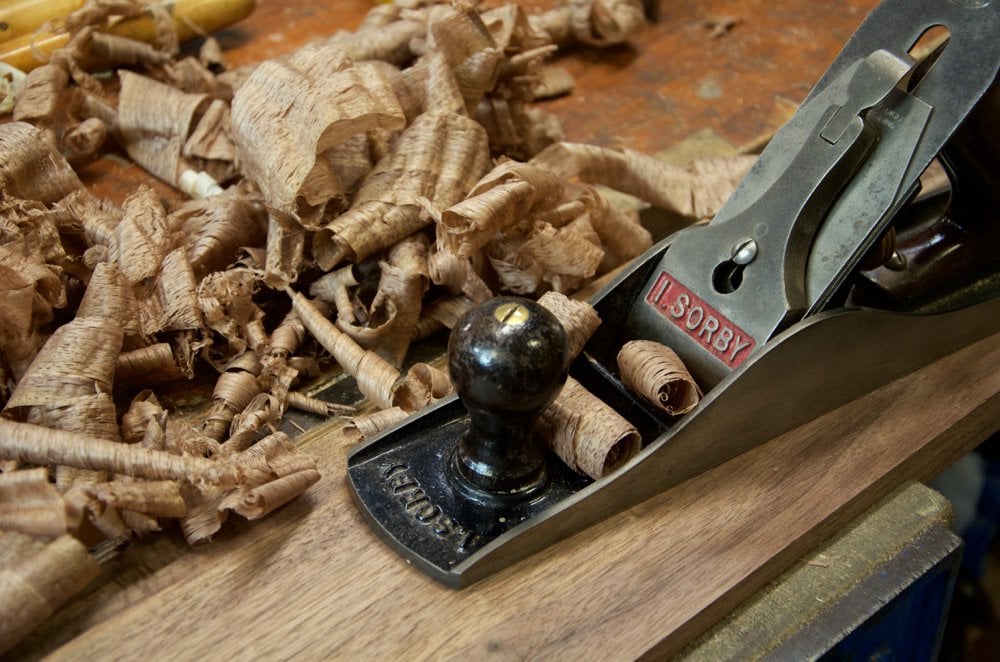 Let’s look at the frog in it’s singular role then.

You might be forgiven if you have the impression from different sources that the frog is constantly being adjusted according to any grain you might encounter. It’s not. I can tell you that frog adjustment with regards to throat opening is actually quite insignificant, of minimal value and more of conversational interest than practical. I can also tell you that throughout my apprenticeship as a boy I never saw any man alter the frog setting to close the throat of the planes they used. Thinking further about this just for a minute you might question what happened before the arrival of these cast metal plane types. Always remember too that the one who frames the issue determines the outcome. Wooden bench planes throughout the world had no throat adjuster at all and the metal plane throat adjustment only arrived in the latter part of the 1800’s. To the uninitiated anyone might think that today’s woodworker has become dependent on this added feature, but I venture to suggest that 95% of woodworkers have no reason to adjust the throat opening and 95% of woodworkers don’t use this extra so much to adjust the throat opening but to hold all of the adjusters. Take the trouble to ask around and you actually don’t find many real woodworkers working very much with the frog altered at all. Once you set your frog you will most likely leave it as it works best for your general woodworking. Then, when you encounter any type of wild grain, you will most likely do what we all do and that’s reach for a good old #80 cabinet scraper to tackle the rebellion.

Hopefully you can now see that it’s too much of a faff to alter the frog of the plane to tackle isolated pockets of wild grain and that’s for sure. In reality I think that I could use my planes for the next 20 years getting the pristine results I demand with the frog set to it’s very normal back position where the heel of the plane iron is pressed equally against the plane sole and thus perfectly aligning with the face incline of the frog. You must see here then that in this position the frog becomes immovable because the heel of the iron is firmly seated against the sole which removes all pressure on the frog itself. Hence no chatter is actually possible.

Now then, where do I use the plane with the throat more closed than wide open? Sometimes, as in the case of working on the White House cabinets we made for the Cabinet Room, the veneers we used were 3mm thick. Some of these veneers were 15mm to 50mm wide with diverse and alternating grain directions. This effectively made hand planing difficult but not impossible. On this work I closed the throat down to narrow, leaving the throat opening between the cutting edge and the sole about .5mm. When planing guitar wood or the bouts for violins and cellos, where the wood is 2mm or less thick, and the wood is planed quite differently than say thick sections of wood, it’s also best to close down the throat. Curly maple and other such figured woods are not usually difficult woods to plane at all, even though they do look to be so. It’s a surprise to most people, and sometimes offensive to others, then, when I tell people that a plain old plane like a non retrofitted Stanley does the trick on such woods just fine. 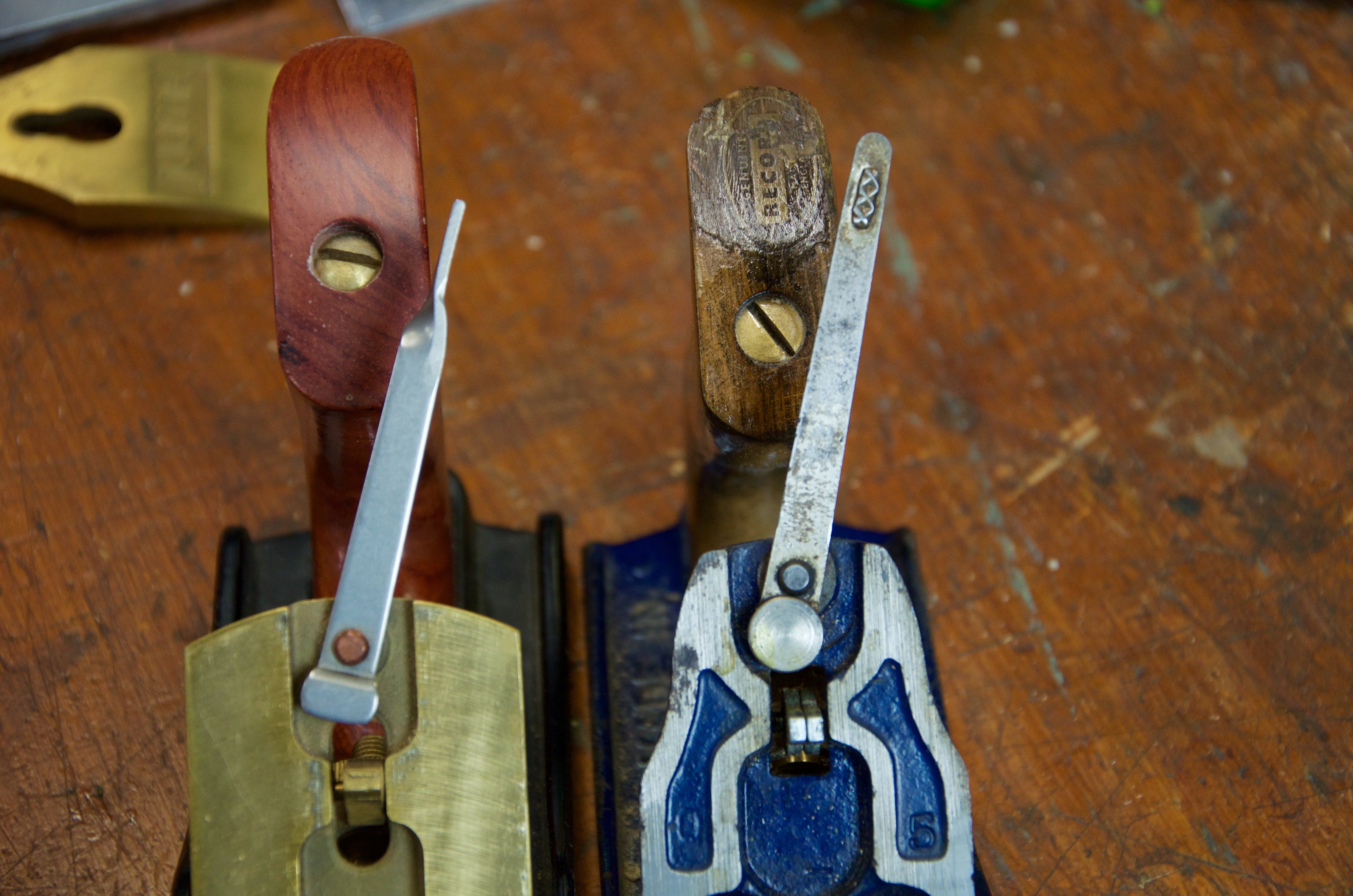 9 thoughts on “Understanding the frog in your throat”