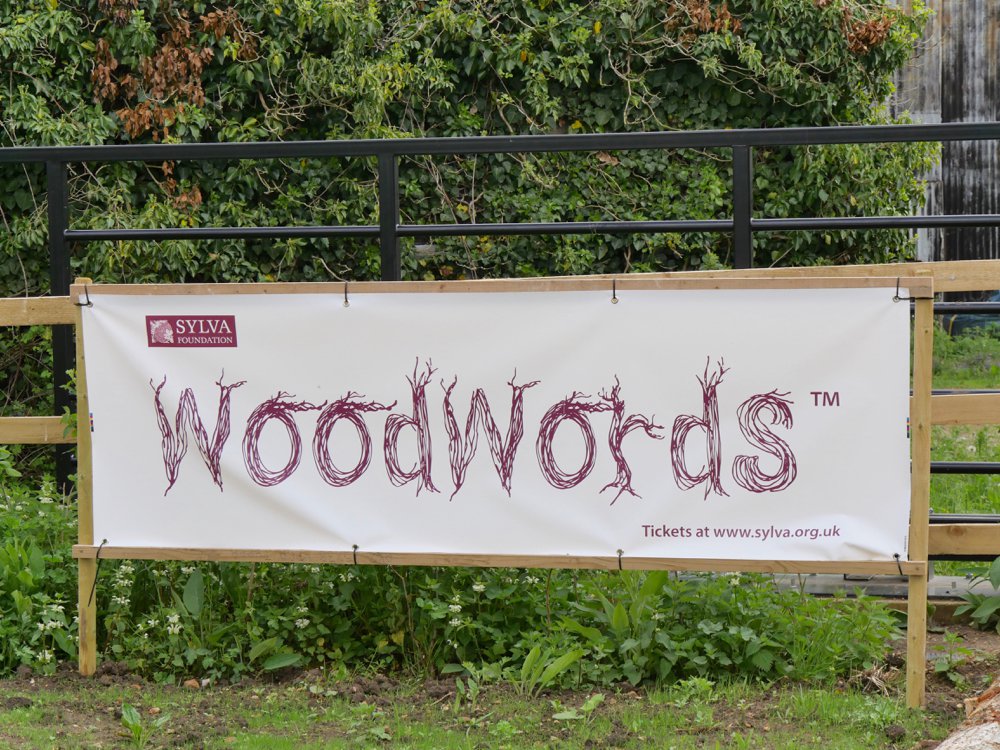 ArtWeeks continues this week and the weekend was very successful and so too the WoodWords line up of authors sharing from their background the work in the books they wrote. It was quite humbling in many ways but the big thing for me was seeing 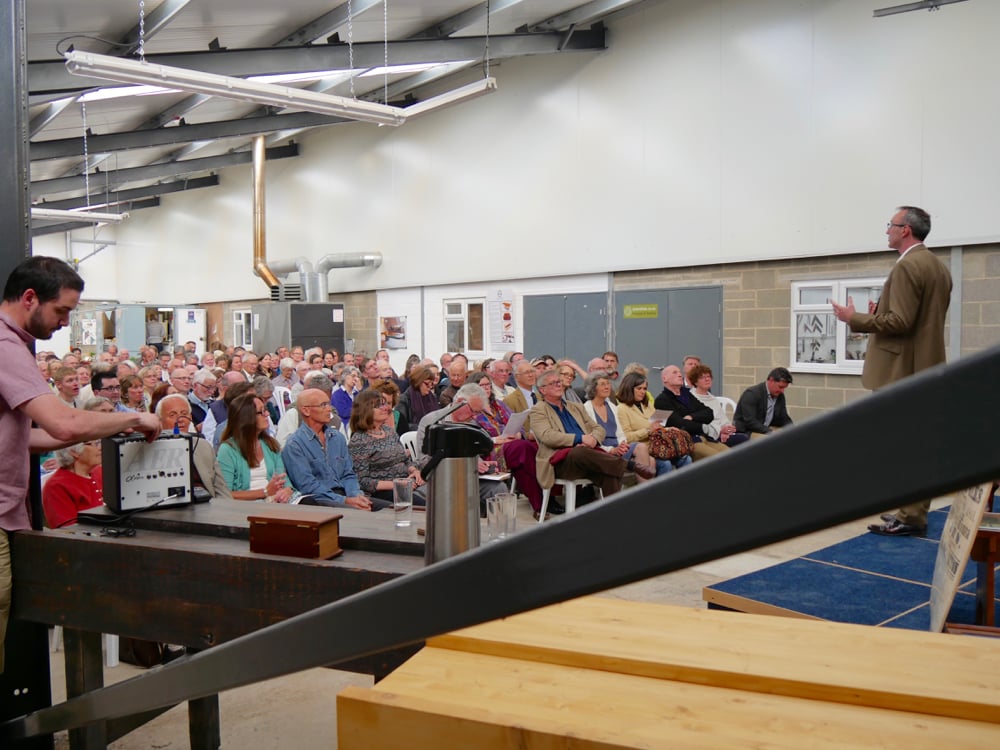 the significance of the work the different authors contributed to the literary world surrounding the wood, the workings of woods and then the woodlands themselves that so interact in our lives to transcend the centuries of robbing the lands and even raping and ransacking our environments in mindless pursuit of sequestered wealth. I felt thankful that the people we were speaking to cared passionately about the work we are doing as individuals. They saw how our individual concerns work in tandem with one another to corroborates our sense that what’s broke needs fixing. Industrialists, economists (and perhaps one day even politicians) in world cultures are at least listening to what we have to say. 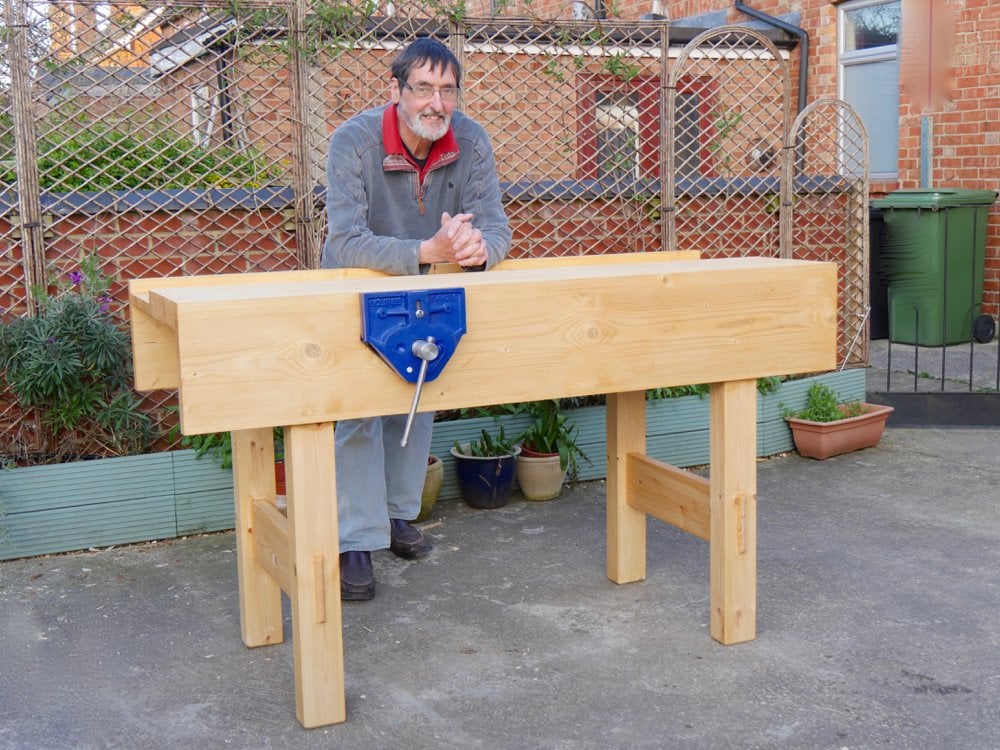 My new workbenches made from recycled wood were well received by people visiting over the weekend. I used one of them for demonstrations and to show that a decent workbench can be had for as little as £25. The vises are both new and old as you can see. 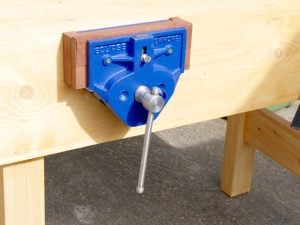 The old one is smoother to operate because it was used by a craftsman for half a century before I bought it secondhand. Which vise should I buy is a common enough question and I will have more on this in a couple of days. Throughout both benches I used the same joinery. It’s very standard on this type of bench although I 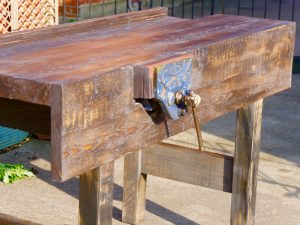 have also seen crossrails simply housed in instead of mortise and tenoned as a standard method too. This works even though the M&T is exponentially better as a choice. 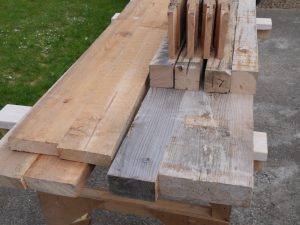 Anyway, there is no doubt that people were inspired to have a go and to consider that they too might want to try building their own workbench. 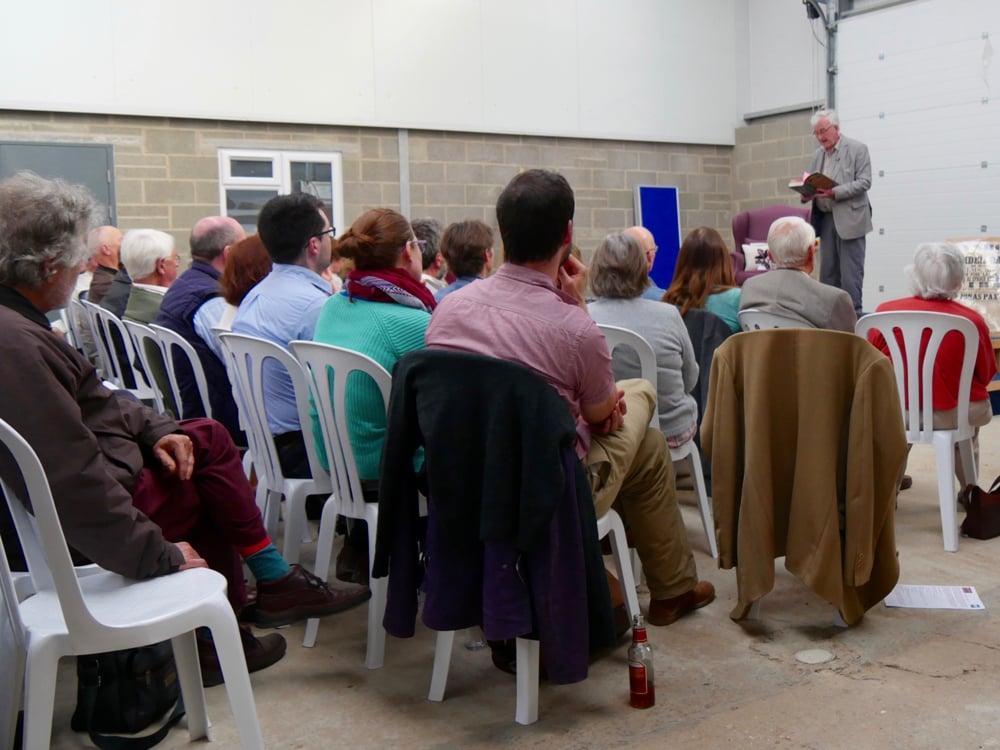 If you are looking for something to read that is quite different to the norm of woodworking you should consider Richard Fortey’s The Wood From the Trees A long view of nature from a small wood. It is just out and is most invigorating. “Richard is a British palaeontologist, natural historian, writer and television presenter. He served as President of the Geological Society of London for its bicentennial year of 2007, and worked for most of his career at the Natural History Museum in London. The wood for the trees combines stunning natural history with the ancient history of the countryside. The book is a wonderfully evocative biography of a beech-and-bluebell wood through diverse moods and changing seasons, and tells the full story of the British landscape.” I think you will enjoy this.

I already recommended Gabriel Hemery’s volume, The New Sylva a few weeks ago. Gabriel has a lifelong interest in sustainable forestry, and is co-founder and CEO of the Sylva Foundation. His book was published by Bloomsbury in 2014 to coincide with the 350th anniversary of John Evelyn’s 1664 Sylva. Intertwining science, art and history, and illustrated with 200 exquisite drawings by co-author Sarah Simblet, The New Sylva describes the tree species that play a significant role in today’s society, and offers a deep and enriching understanding of our orchards and forests.

The Man Who Made Things Out of Trees was penned by Rob Penn (pun intended) Rob is patron of the Small Woods Association and Media Associate at the Sylva Foundation. An avid cyclist, Rob is also deeply passionate about wood and woodlands. He presented the BBC Four series ‘Tales from the Wild Wood’. 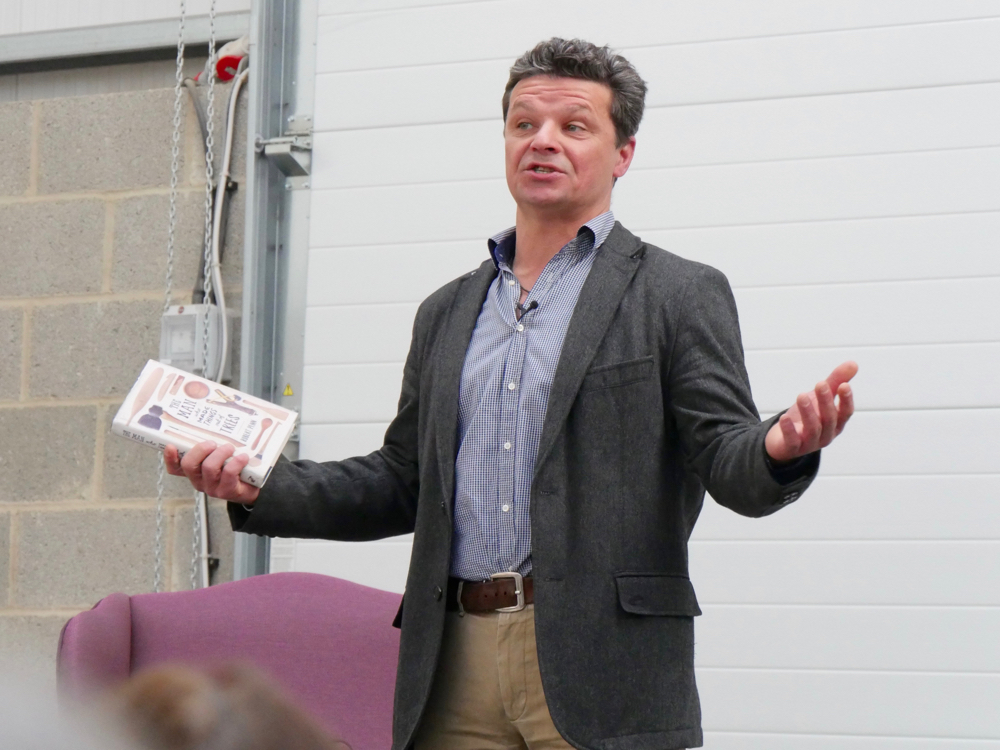 As a journalist, he writes for The Guardian, Observer, FT and Sunday Times, as well as a host of cycling and woodland publications. His latest book The Man Who Made Things Out of Trees was published by Particular Books, in 2015. His previous book It’s All About the Bike: the Pursuit of Happiness on Two Wheels was a Sunday Times bestseller in the UK, and was translated into 13 languages. 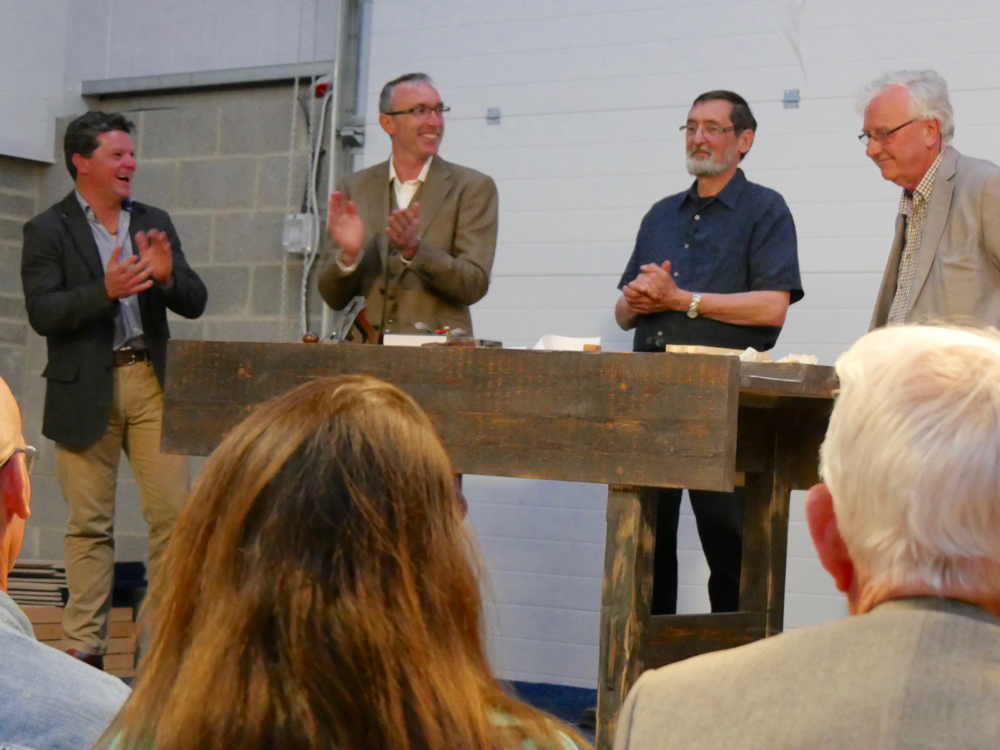 Some good reading all round and not at all meant for just UK readers. Book signing was par for the course too. Let me know what you think! 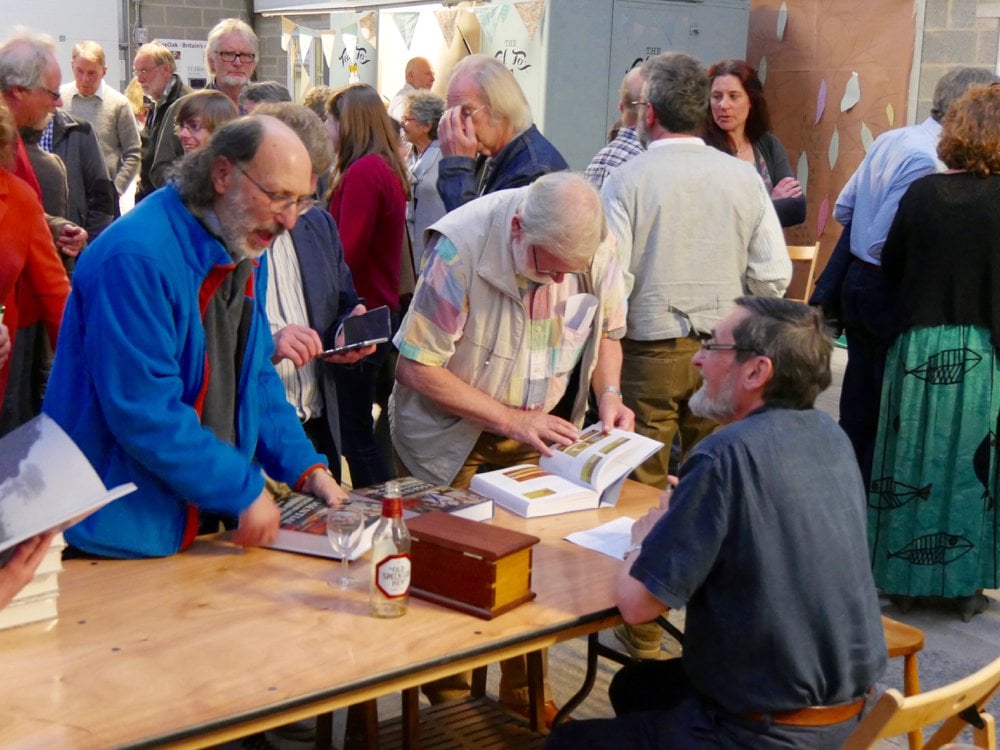 4 thoughts on “The Weekend Woodworking and WoodWords”