I have pretty much zero experience with woodwork, and I am at a bit of a loss where to begin.
So, what do I need to become a woodworker?
With kind regards
Mark
Answer:
It’s a question that at one time would never have been asked. Prior to the 1980s almost all boys in the western world learned woodworking as part of the general school curriculum, beginning for boys at around 13 years old. 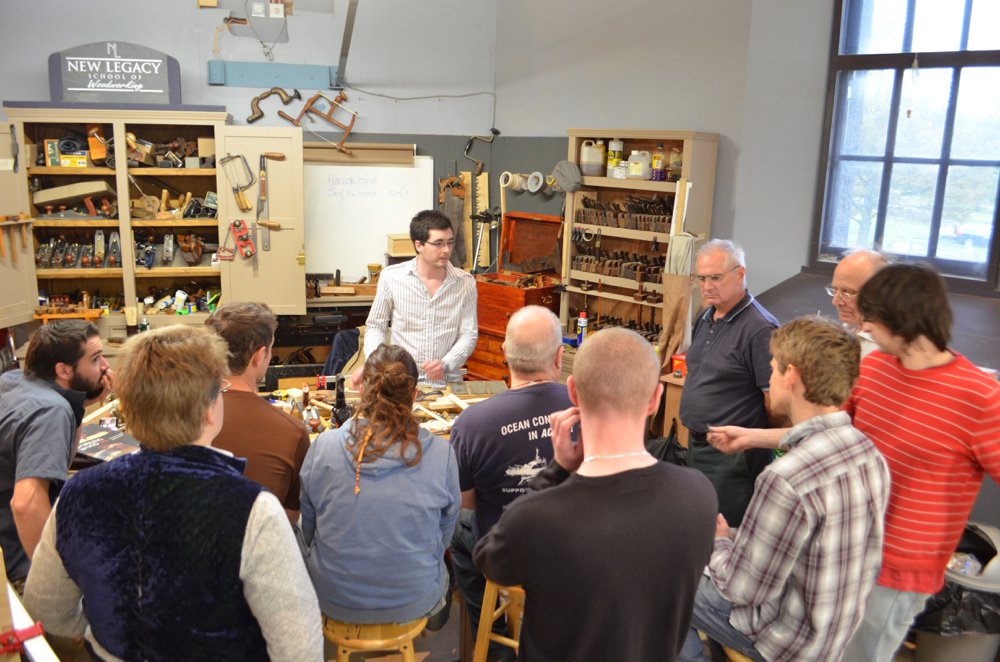 This initiation was a rite of passage into the adult world of working; an equipping for future possibilities whether that be actual occupationally or for general home repair and indeed home making and maintenance. Back then schools had weekly, three-hour classes in the workshop spanning two to three years in ever-progressive levels. Back then craft classes were non gender specific until around that age. After around 13 the class split and boys accessed metalwork and woodwork and girls accessed something called home economics or domestic science. All areas were significant to life ahead if parents didn’t or couldn’t teach their children these life supporting skills in the home. My mother, a full time dressmaker from age 13, gave me the basics of sewing, housework, cooking and working within the family community. She encouraged my woodworking passion from an early age but never neglected the areas essential to a well balanced lifestyle.
Whether many or indeed any gained quantifiable skill in any of the above listed departments remains questionable, but in woodworking and metalworking, I think most boys did use what they learned to better evaluate whether one or the other was for them a calling. It was here, in the hallowed walls of the woodworking workshop, that we learned all the names and uses of a range of hand tools. It was pure, unalloyed and unsullied by robotics, machines and computers. There is no doubt in my mind that woodworking the way I learned it was the very best thing that happened to me. I learned so much from Mr Hope who always responded kindly to sensible and sensitive questions. He taught me to use the wood lathe where I turned rolling pins and legs for stools. 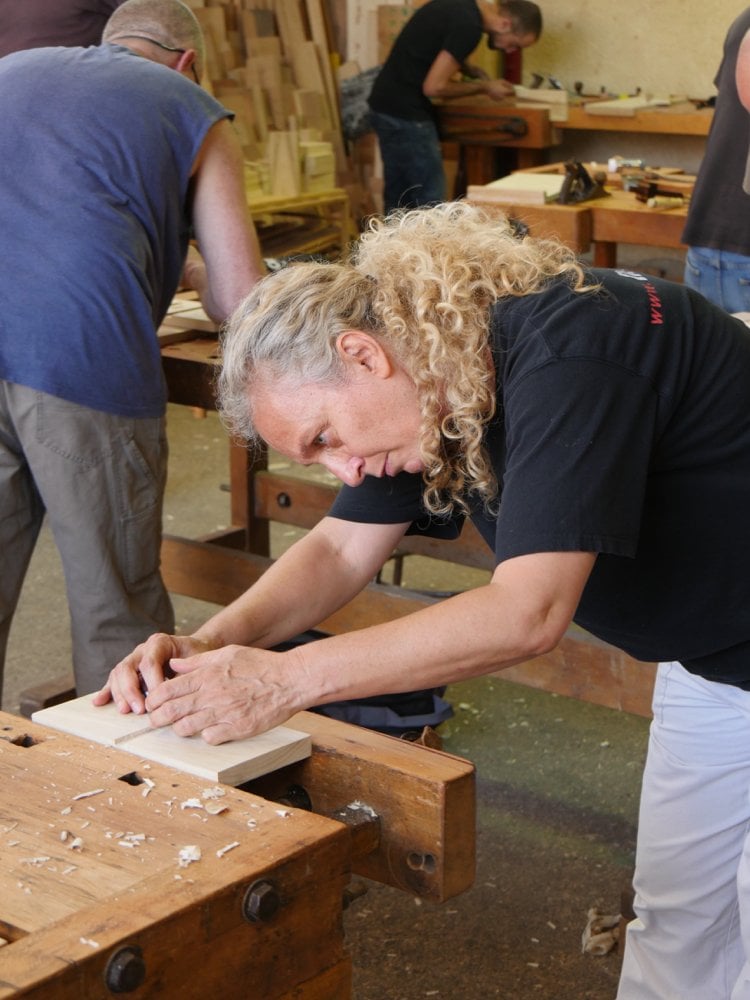 I learned to square my billets for making a framed stool and weave seagrass seats with crisscrossed stranding. Woodworking and metalworking workshops were both the making of the boy and the stepping stone to an apprenticeship. Classes were constantly filled and in any secondary level school, be that secondary, comprehensive or grammar school, thousands of boys throughout Great Britain went through courses that equipped them with the basics I am talking about that they used throughout their adult life at some level. That’s no longer the case today of course yet what’s happened is many thousands of adult men and women are asking the question, So, what do I need to become a woodworker? . Sad though that might be, what a great time we live in when we can reach out to all to even out the disparity that once cut half the population out of the workshops of wood and metalworking. I recall holding up a mortise gauge to a recent classful of students to name it. The answer came back, “A hammer.” For the main part, despite the brief transition from gender specificity to non-gender status, woodworking has become so diminished in western schools it is almost non existent. Perhaps in light of that reality that they are no longer taught by skilled artisans as in my day that is the very best thing. 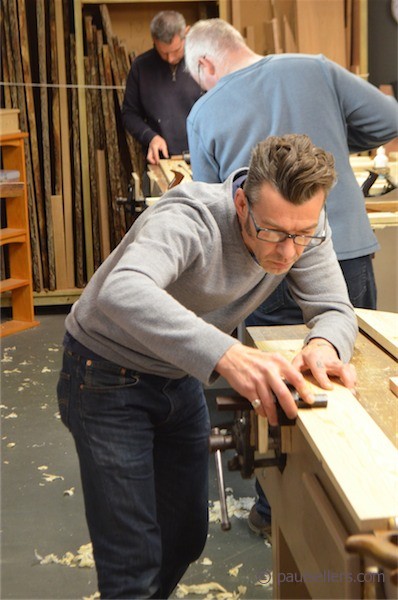 In the mid 90s this question started cropping up in my world as a crafting artisan. At craft shows, exhibitions and then, and subsequent to that, resulting from the malaise, even dedicated woodworking shows I would encounter serious people looking for a change. The UK and the US are very different entities when it comes to working wood and the question in the UK is very much, “What do I need to become a woodworker?”, whereas in the USA it was more, “How can I learn woodworking the way you do it?” No matter. The reality is that people were and are looking for an answer to the unvoiced question so here we are voicing the question to bring new clarity. 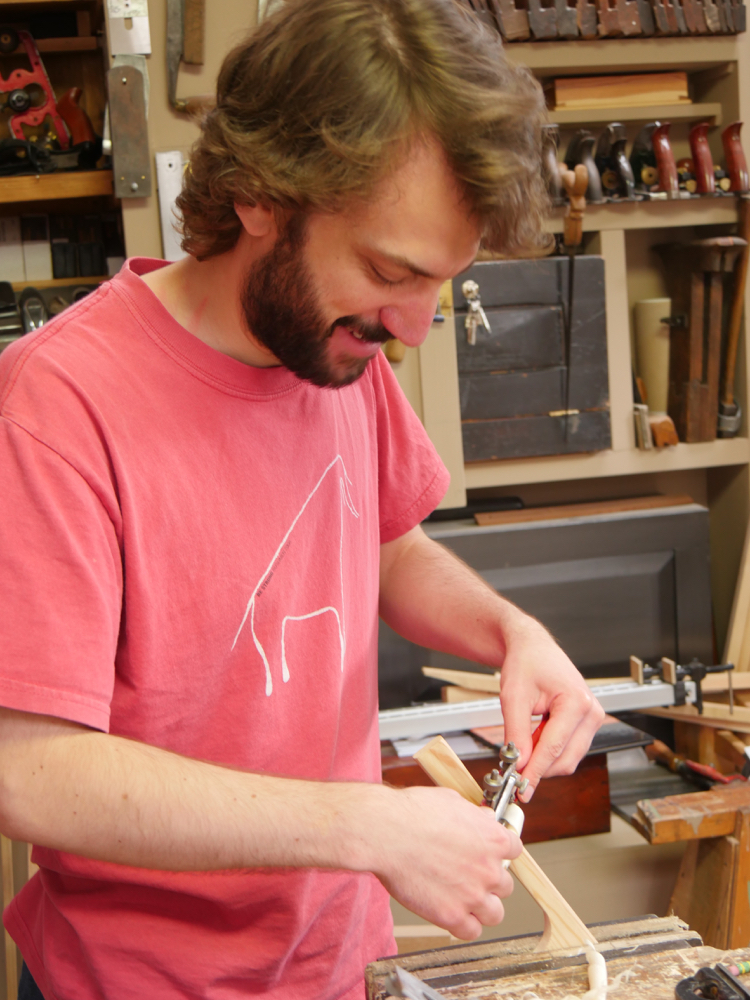 I asked Mark (above) to send me this question via email. Mark works for us as our office manager and the only experience of woodworking he’s had in his 30 years of life is to make the spatula we created for the experiment video how-to some of you contributed to a few weeks ago. We gave him the video, the few hand tools and the wood. The rest was to to see if indeed the video would work as a serious training vehicle for someone with zero experience. Could someone actually create a spatula with no further input from those experienced woodworkers around him? It worked. 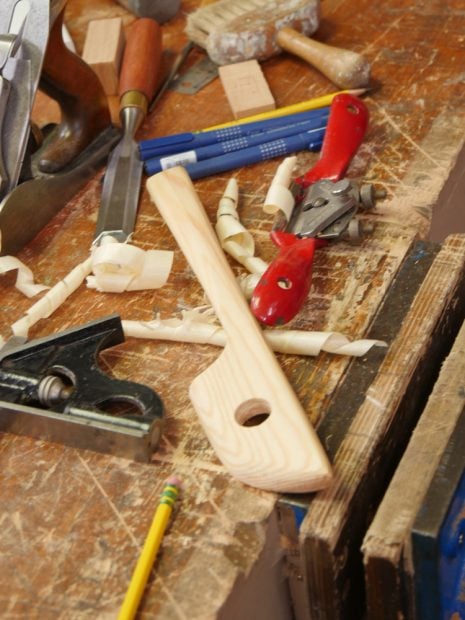 The reason I asked Mark to email the question was because it is one of those questions that’s rarely if ever asked but I know people ask themselves the question when they consider this as a possibility for them. Of course the hardest question to answer is the one that’s never asked. It doesn’t at all mean that the questions aren’t there, but that they are unvoiced.
I plan to try to answer this in view of the successes we’ve gained in training hundreds of thousands of woodworkers worldwide over the past decades. These people comprise individuals of all ages who attended my hands-on workshops and now a massive audience of people following our work online We calculate that we now reach around 1.5 million enthusiasts every month who are genuinely interested in woodworking at every skill level from raw beginner to the most advanced. Amidst the steady decline in the amount of woodworkers receiving quality instruction to gain competency, I’ve seen a new generation of real woodworkers emerge from the flawed thinking of schools, political strategies and economic and cultural shifts. The result has been a stronger, more resilient breed of woodworker. One that is slowly emerging as, well, a successor. In one sense it’s been a sort of survival of the fittest; the evolutionary revolutionary. He, she finds solace in just a few square meters of workspace at the end of the lean-to in the garden, a garage or in a rotting shed. A dozen hand tools and workbench made from an old kitchen table seem the most unlikely of anchors for the hours of well-spent immunisation against the malaise of the age. Hours just disappear to become minutes or even seconds. When the thought was that hand tools would soon be obsolete relics belonging to past generations, a small but inspired generation of individuals began to discover that hand tool woodworking answered the deep, deep roots of creativity they never knew existed. For some it seems indeed a primitive pastime, for others, the majority, it’s the total absorption they need for healing to take place in a word filled with dis-ease—an immersive therapy of simplicity if you will. So I choose a less complicated approach to identify the need and prescribe the antidote to the question, “What do YOU need to become a woodworker?
This is the preamble or perhaps more a prelude to the new series I’ve began for you to reason out for yourself or give to others to better understand why and what it is to become a modern-day woodworker reaching back into the past for the treasures we need in the future of woodworking. I hope to show what I think it takes to develop true competency. I hope you enjoy it.

23 thoughts on “Answering the Unasked Qs”