The panel plane I treasure here has no mechanical adjustment and relies on setting the depth of cut and blade alignment to the sole using simple and positive hammer taps. I know that many people, mostly engineers and such, might consider tap adjusting archaic and inaccurate, and I understand that, but really it’s far from that. As a boy I watched men tap the cutting iron to task using different points on the plane body and the cutting iron with a steel hammer. The size of hammer was inconsequential, but you do get used to favoured hammers for tasks like this.

Mostly I use my Stanley Warrington hammer, which is 12 ounces, but to help preserve the plane bodies over a wider range of planes I pick up my Thorex 712 because it is the best hammer for body-shock blows to dislodge tightened wedges for cutting iron removal during sharpening.

For bench planes that require compensation for blades that might not be sharpened exactly square the steel Warrington is excellent. It’s not fancy or costly and only careless use causes any kind of damage. I say this because the two hammers shown above should cost no more than say £25 for the two. Also, I have seen dedicated plane hammers being used but this is purely a preference some have rather than any kind of necessity. Between my two hammers I have everything I want and I also have two hammers that can do every task from forge work to hinge setting, nail driving to furniture assembly and all mallet work too. I certainly don’t think you need any special plane hammer as some advocate, unless of course you choose to buy one, which is fine. I think some to be very over priced and even a bit snobby too. That’s my view.

The securement for the iron is by leverage through the bulky bronze lever cap bridge crossing from one side-wing of the plane to the other. The knurled bolt passing through presses against the cap iron (chip breaker USA), which forces the fore edge of the bridge against the cap iron and the whole of the cutting iron assembly. Fingertips feel for the initial cutting edge in the throat of the plane as the bolt is cinched tight. All adjustment from now on is by tapping the plane at one part or another or tapping the iron itself.

You really want a thin shaving and one that is even across the width of the plane sole as with other more modern planes. If it is even and you feel good about the shaving’s thickness then a quick check on the lockdown and you are good to go.

More likely the plane iron will be misaligned and the iron requires adjustment.

Look at the top area of the cutting iron and you will see the corners are not square but angled in. 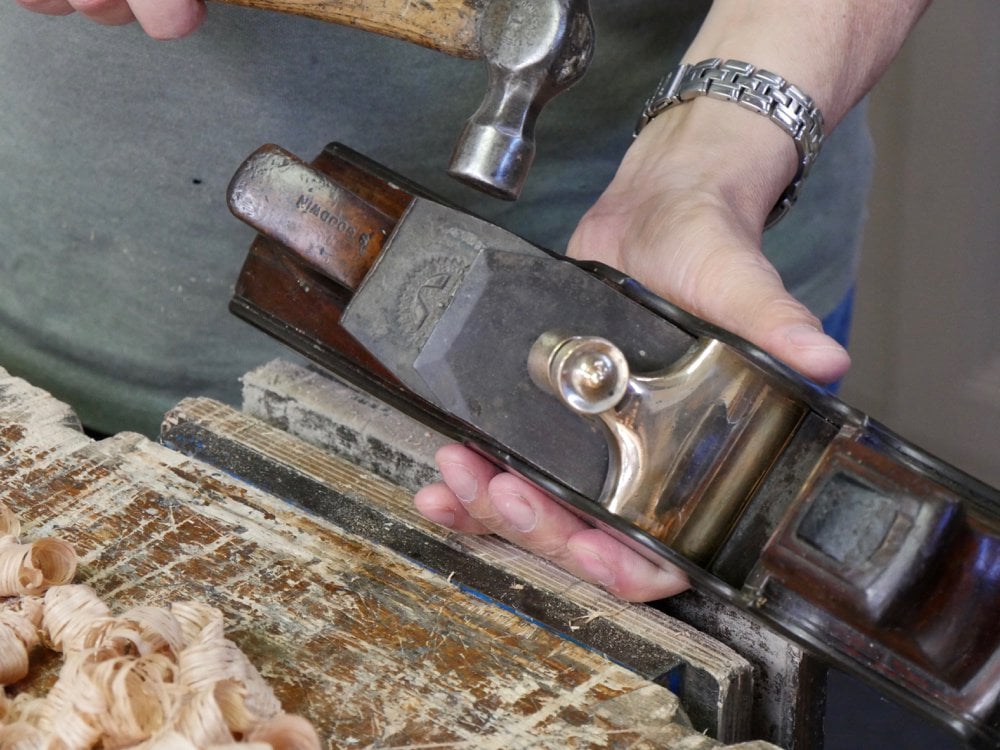 The angles are usually angled at the specific angle so that when the lateral adjustment is necessary the face of the hammer can be aligned to the angled face and tapped accordingly. Tapping from one side simply cants the blade over. As long as the blade is not too far out of square, shoot for no more than 1/16″, hammer tapping for aligning this way always works.

Withdrawing the iron back into the plane throat on panel planes is different than say all-wood bodied planes because wooden planes can be tapped in two places, the front knob and the heel or rear face of the plane. 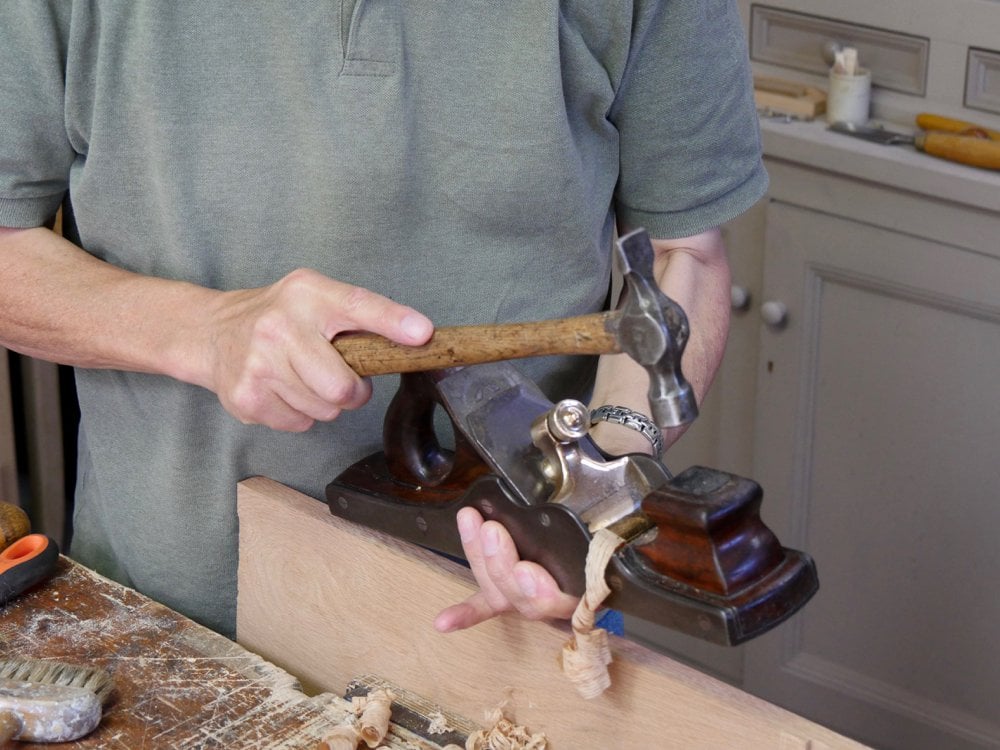 With the infil panel plane we tap on the top of the fore knob button. In this case the knob has an inset square protrusion we use as a striking area. This is the part that ultimately wears down but is designed for easy removal and replacement. Usually there is no need to loosen leverage on the lever cap bridge, but for major adjustment, perhaps as a result of severe pressure resulting in slippage, we do indeed sometimes slacken off the pressure. Tapping the fore knob works as a back-shock adjustment. It’s really the best one even if you did want to tap the heel with say the nylon Thorex hammer, which works too. I just use the fore knob adjustment together with tapping the cutting iron for depth and alignment. 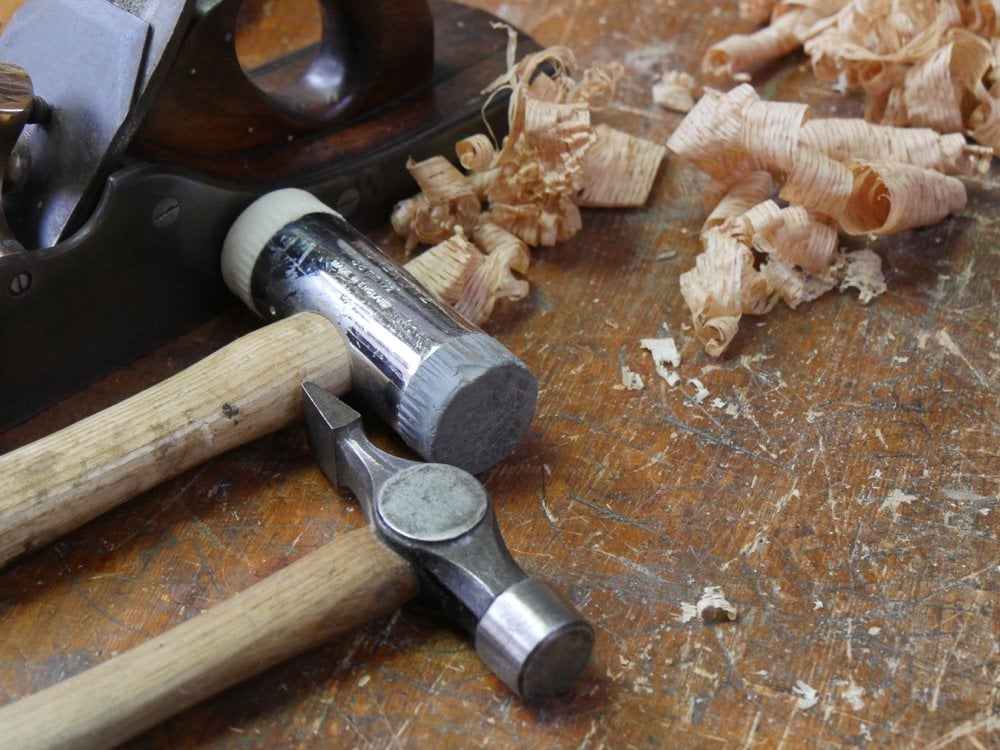