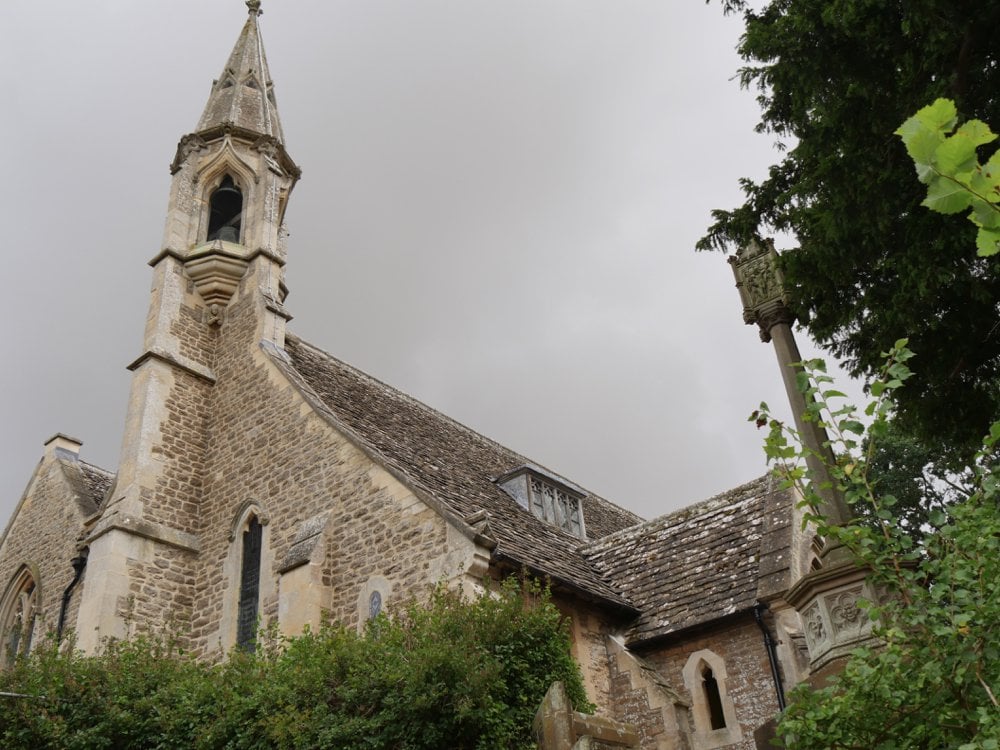 In the village, it’s on my way to work, stands a spired church of England church first built in 1180 and subsequently added to in the the 13th and 14th centuries by all accounts. How England can be a church I don’t know, but there you have it.

The church stand atop a tall hillocky outcrop and stone steps twist and turn ever upward without a break until you arrive at the vestibuled entryway and a large oak door ornately hinged with massive hand wrought, iron hinges.

This week we took photographs for a new work we are pulling together about wood and woodworking. I spent two sessions there on consecutive days. I’ve been bemused here before, taking preliminary pictures and such and the thing that struck me wasn’t so much the church proper but another structure beyond the church which is a covered lichgate built from oak.

This lychgate, gated on the outer side of its frame, stands on the opposite side from the stone stairway. Oh, and if you haven’t heard of the word lychgate you won’t be alone. No one in the office had either, when I mentioned it. I grew up with the term because repair work and restorations to such structures were common enough. Lychgate is also spelled lichgate, lycugate, lyke-gate or as two separate words lych gate too. Its pronounced litch+gate as one word BTW.

My friend, Ryan Cowan, the photographer who photographed my latest book for woodworkers, that’s Essential Woodworking Hand Tools, was working with me to try to capture images we needed for our current work. With my observing and then being photographed by another I was in the unusual position of being left free to pursue mental gymnastics as well as physical ones climbing into the eaves of the lychgate roof area. Investigating a sort of archaeological digging if you will. As I sat waiting, positioning and such, I found myself dismantling the lychgate’s architectural history (for want of a better term) section by section. 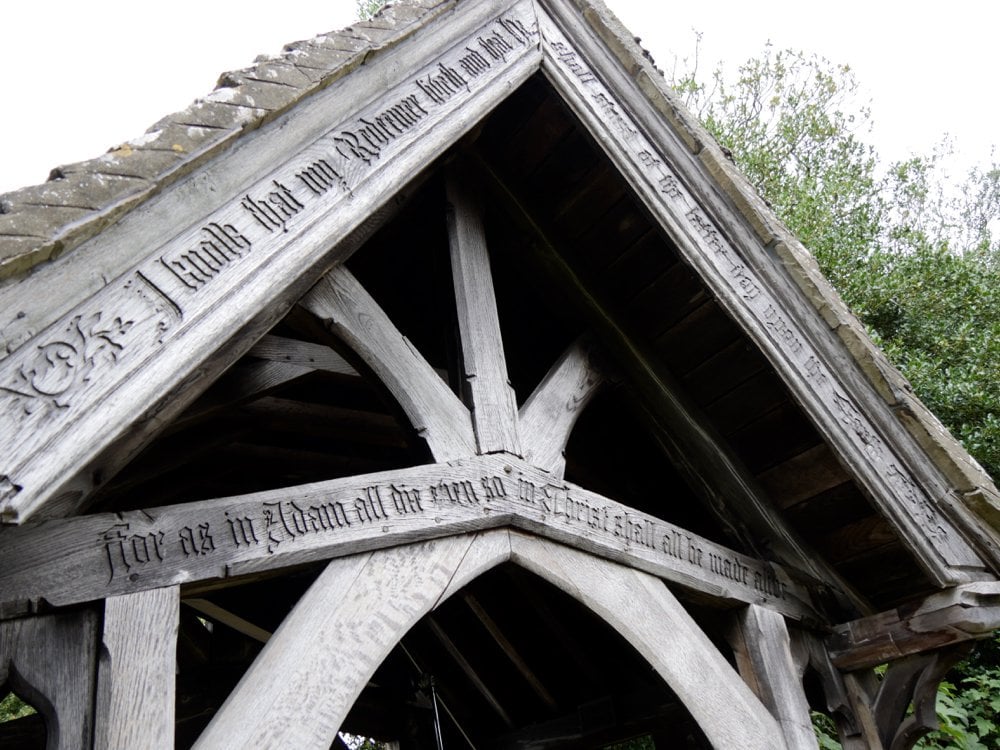 Firstly the main structure originated as oak with some sections in chestnut too. This superstructure records diminishing levels of craftsmanship probably determined by cost and skill levels, lack of aesthetic concern, care and so on, but also a lack of knowledge on the part of the trustees responsible for building maintenance. These are often a common issues.

Structures like these are indeed things of the past and I am not in disagreement with the fact that that’s where they belong at all. Many structures depict differing eras in the cultures we live or lived in and we will never see a return of them. 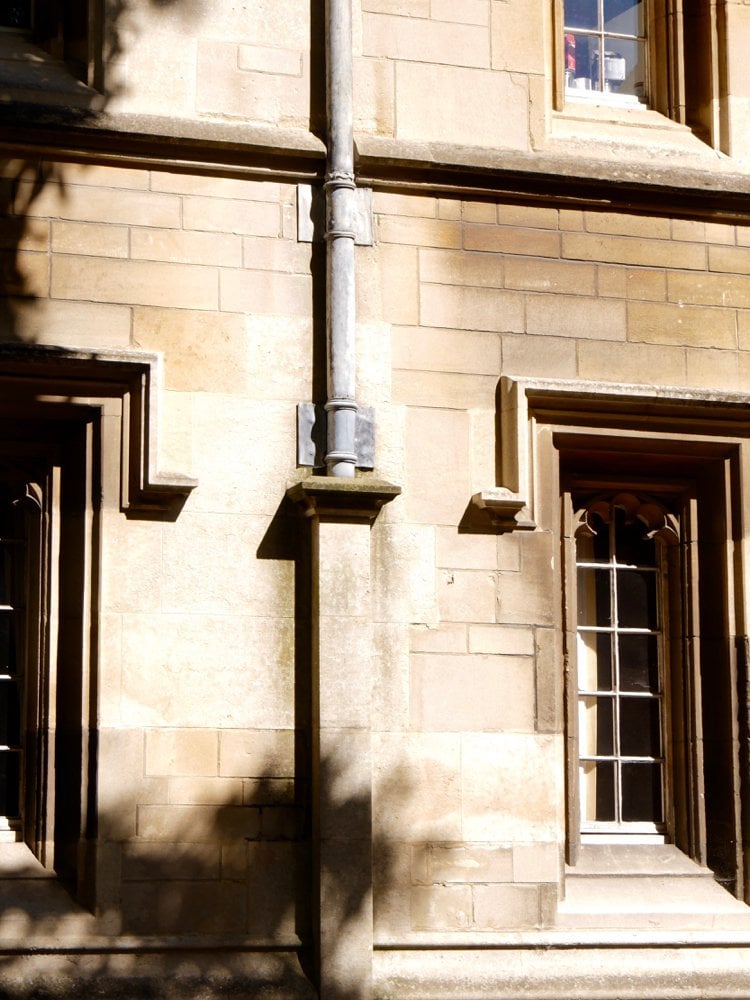 I can’t imaging stonework like this returning because just as with culture, architecture and design reaches into the future with change, newness and ever-evolving concepts determined in the age of such developed concepts.

On then to my reason for writing. We should never dismiss past concepts and ideas of design nor the materials chosen in the era. As my eyes worked over the oak, now, well worn by weather, I wondered whether plastic could replace it. Who would have ever thought that plastic windows and doors would replace 80% of wooden windows and doors here in the UK, but it has? People bought into buying plastic, low maintenance versions to eliminate painting wood not realising replacing them comes every 20 years whereas wood, when taken care of with good maintenance, would last a century. A lifetime guarantee is only as good as the company installing. So, lichgates are a thing of the past.

As I sat waiting in photographic resets I looked for ray flecks in the oak that told me that these platelets were more resilient than the open pores forming the adjacent wood.

Oak is definitively ring porous as a deciduous hardwood so my eyes caught the weather-worn areas with deep, deep interest. Searching each level it didn’t take much to compare the restoration work of the 1970s with the original structure and there see the compromises. How often in my youth did I here dumb lecturers tell me plywood and laminations would last longer than solid wood. I say day dumb because they didn’t actually know from experiencing what they were saying yet they spoke with such confidence and unquestionable authority when the techniques and methods were typically untried and untested. 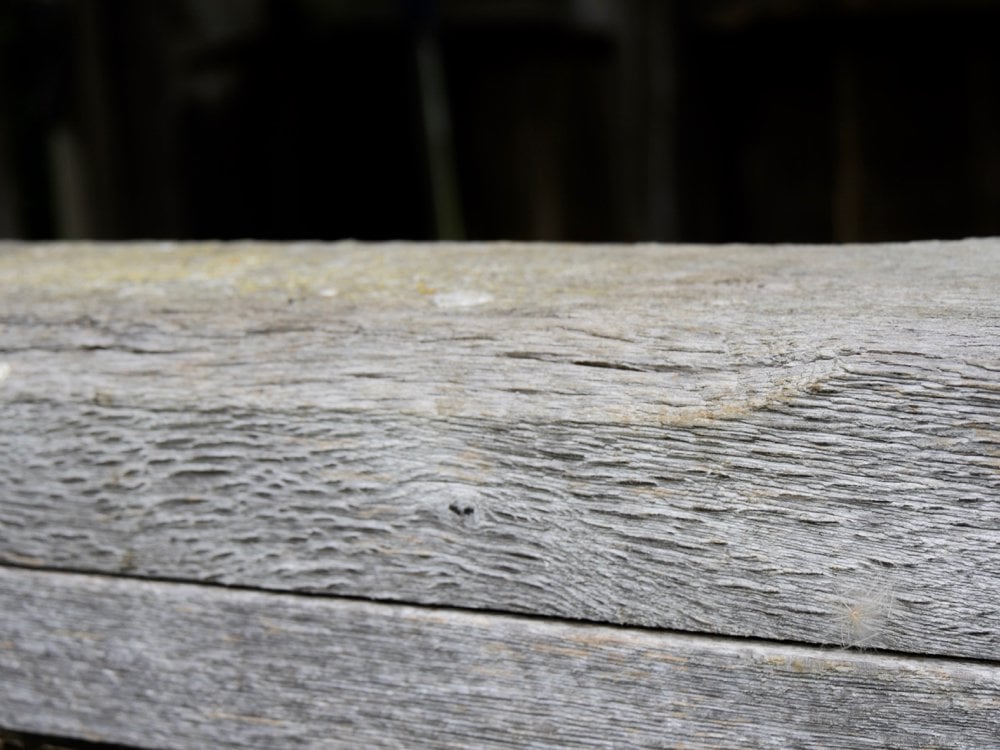 Here, in the humble lychgate the evidence was real. Laminated wood in outdoor and even indoor circumstances does not last as long as solid wood.

Consisting then of many a million cells we seldom see or should I say take note of, oak cells show remarkably in old and new wood. Close-ups in old and exposed-to-the-weather-wood look like colourless striations forming miniature cliffs.

Look in tight and the holes forming the cell walls reflect the durable hardness that gives a dead tree stem the strength to stand for hundreds of years. Thin white lines remind me that they were once gold plates shimmering in the sunlight. 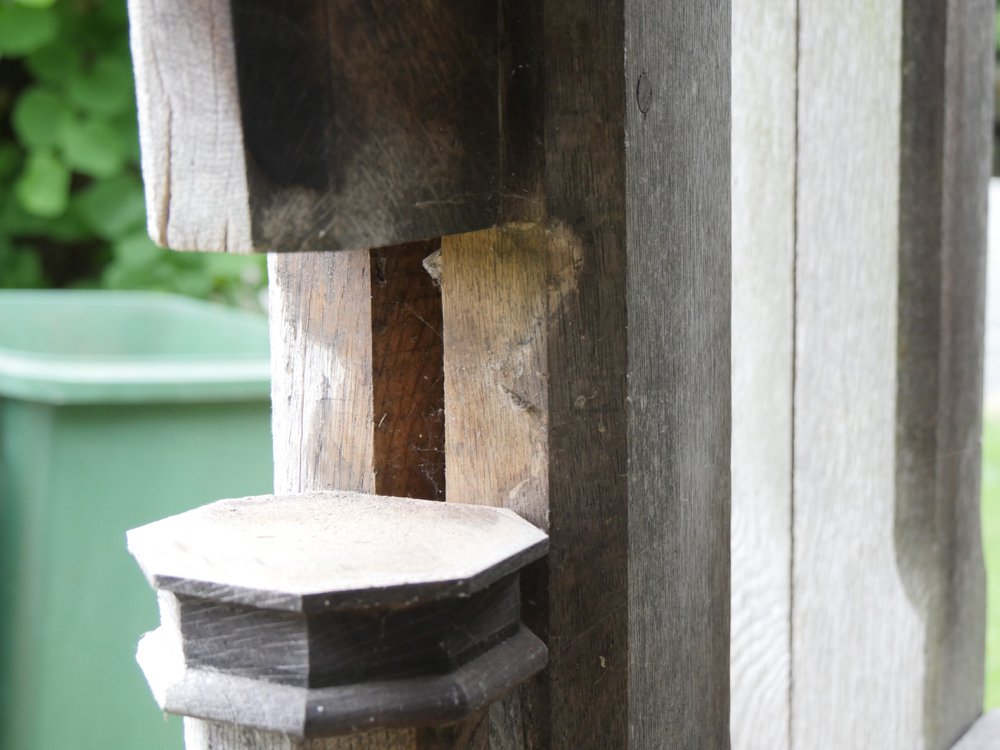 But once again my eyes rest on the separated laminations that were once confidently fitted into the framework of the structure during restoration work. 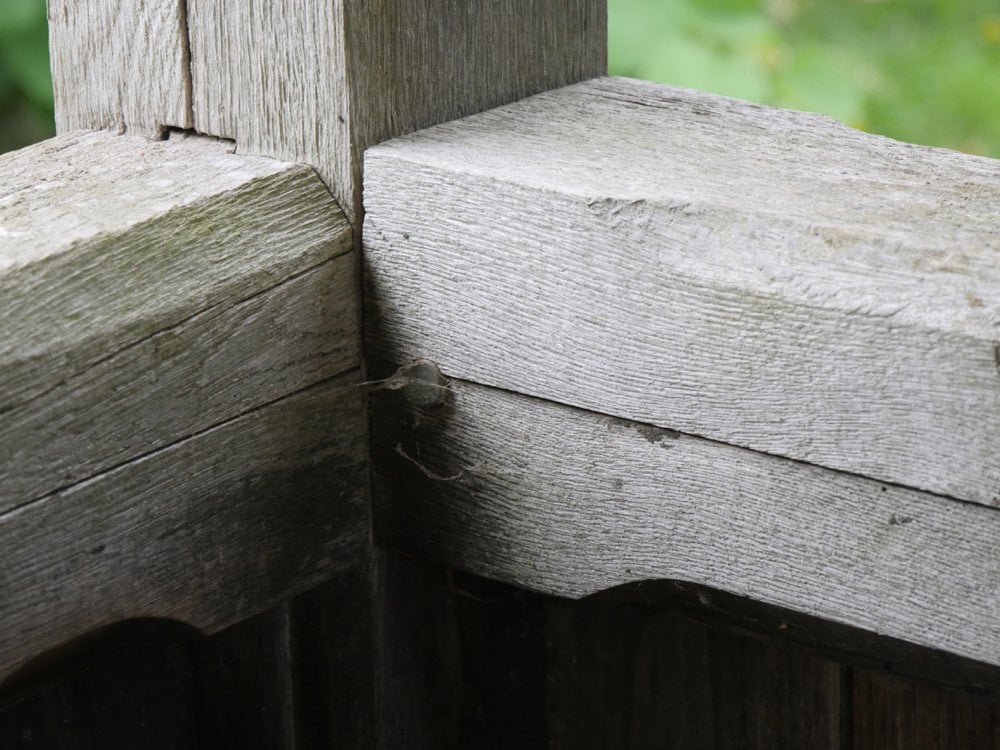 The men doing the work will likely be gone and their work reflects a misguided belief in lamination. Here you see the cills supporting the whole separated under the weight of the frame and then the stone roof itself. But look here. Stopped chamfers fall short of the originals even though they are simple enough to form. This is flawed restoration at its worst.

The other cobbled-on parts show flawed thinking, yes, but more than that it reflects a design where the wood broke down ahead of time for the sake of a little lead flashing.

Inevitably buildings do suffer from poor planning for maintenance long term and whereas in times beyond three hundred years men did make clear plans and thought for lasting longevity, today we do see the breakdown allowed in our modernity. 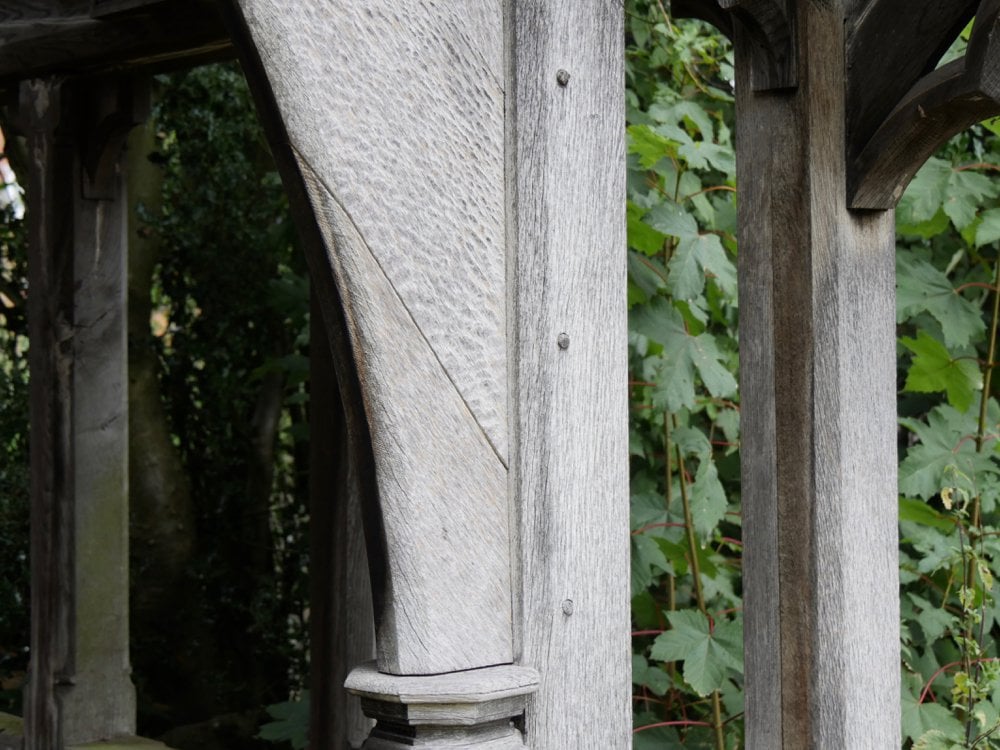 What’s the answer? I don’t know. Despite what’s shown here, wood is still one the best sustainable cultures we have if we could only learn to manage our woodlands as a resource for woodworking rightly. 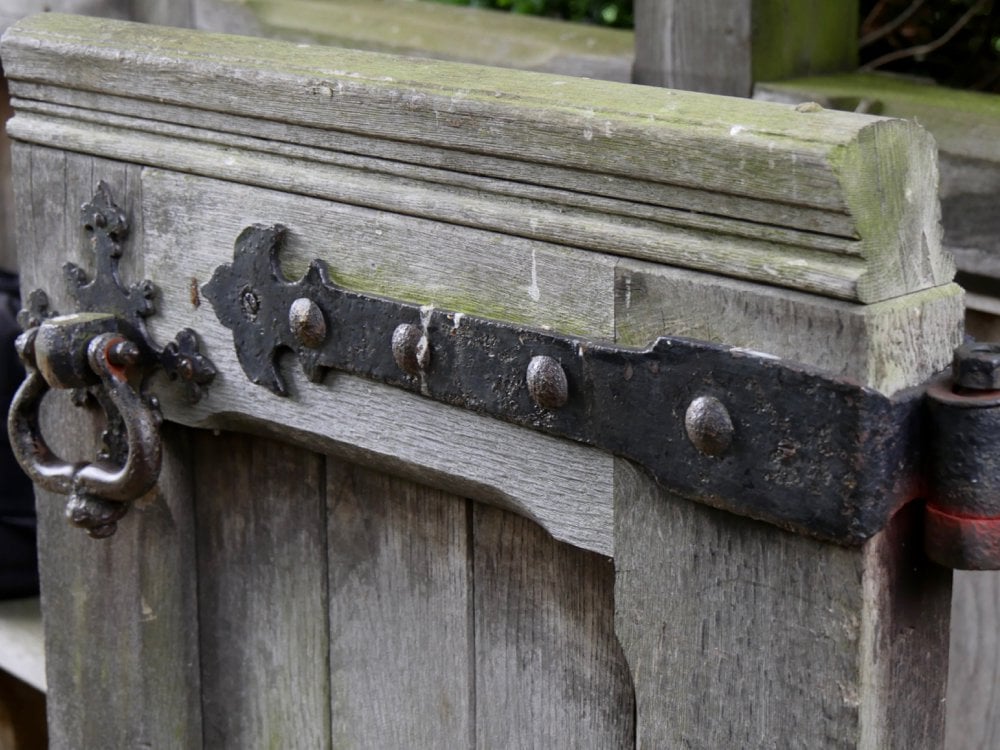