On Wednesday night my sleep was broken into segments of one hour sleeps intermittent with half hour interludes of excitement until 7am came and the alarm vibrated me into the dawn. Why? Well, I had spent the previous day preparing for my class when 15 unknowns would arrive and I would change the way the way they perceived woodworking and working with their hands. Mostly it seemed ~i was putting out the tools and checking for the things that could go wrong. Everything seemed fine. 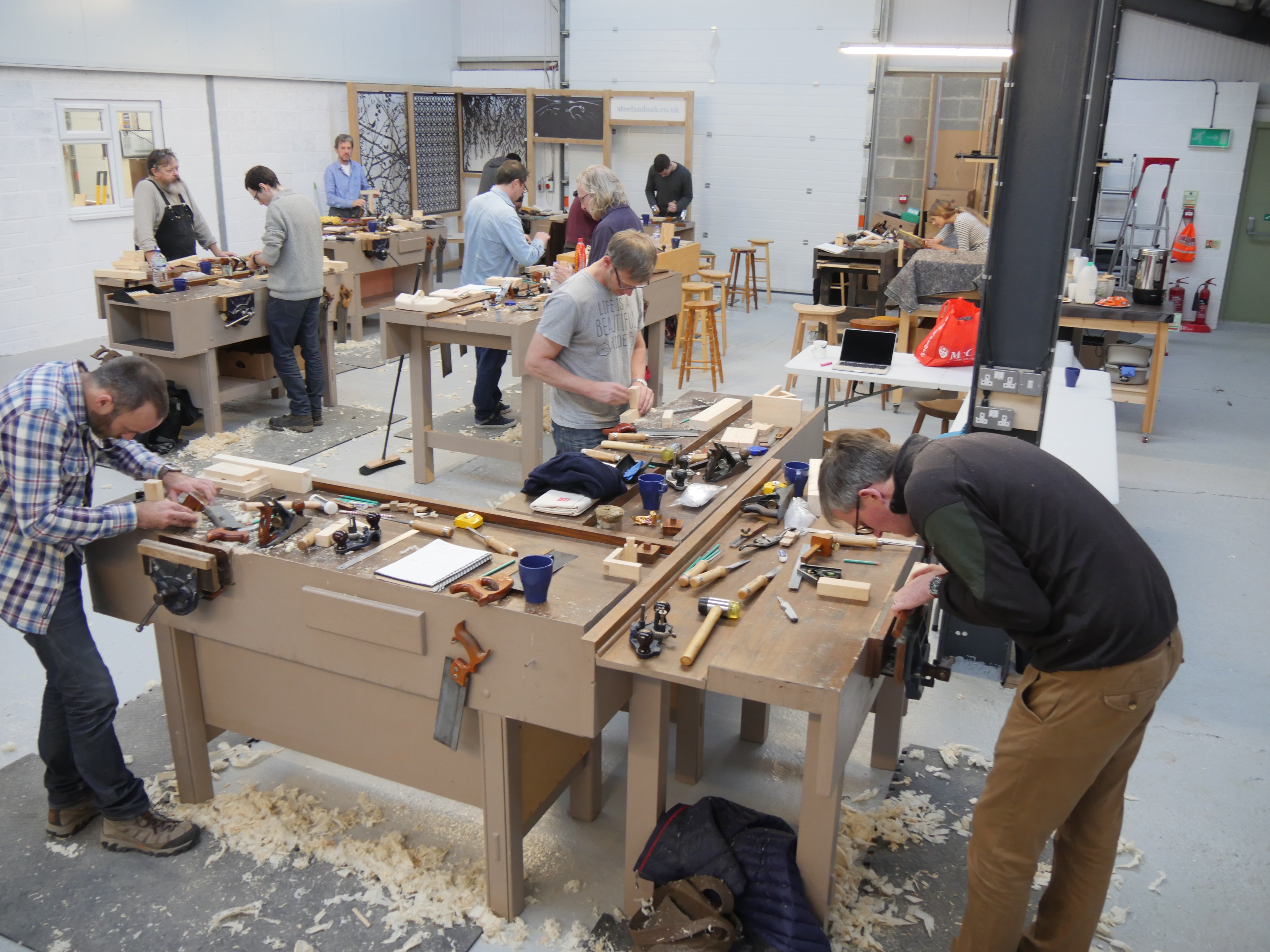 I had planned on leaving for the workshop at 7.45 but promised someone a ride with me and they got stuck in traffic. We left 15 minutes later than planned and so hit the school traffic that slowed us all the further. When I arrived for the class in the morning the firewood was cut and ready to light but the lighter and matches had disappeared. I went to put the water urn on for coffee and tea to welcome everyone and lo the electricity on that circuit (brand new electric) wasn’t there. We checked the breakers and all seemed fine but then we started running cords to the urn and someone found another breaker elsewhere and we were able to get on track. Hence the domino fell.

We still were on track for a 9am start but three students were slightly lost or stuck in traffic but by 9.15 we were in the zone around my workbench for what seemed to me at least to be two flawless days of purest woodworking. 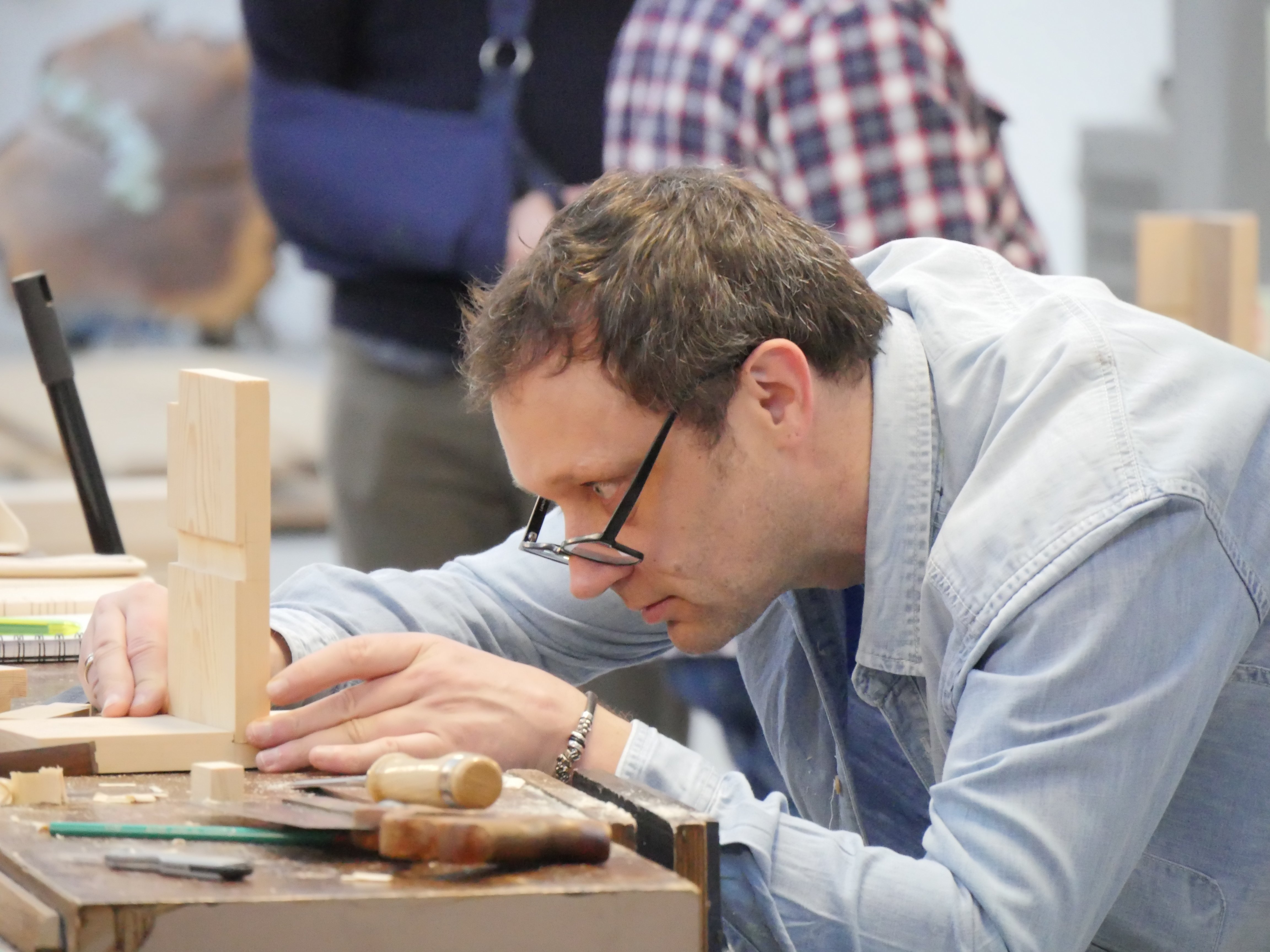 I can’t really describe why I still love these workshop classes so much. In 25 years they have never grown old and they are always unpredictably good. It’s as if the students all collude to make the very most of the class for my good. Whereas I felt the most fulfilled I have ever felt in a class on Thursday, Yesterday, the last day of class, I can’t remember feeling more contented and fulfilled. I don’t really know what it was. Happy doesn’t fully describe it, but fulfilled in the sense of feeling filled full somehow does. 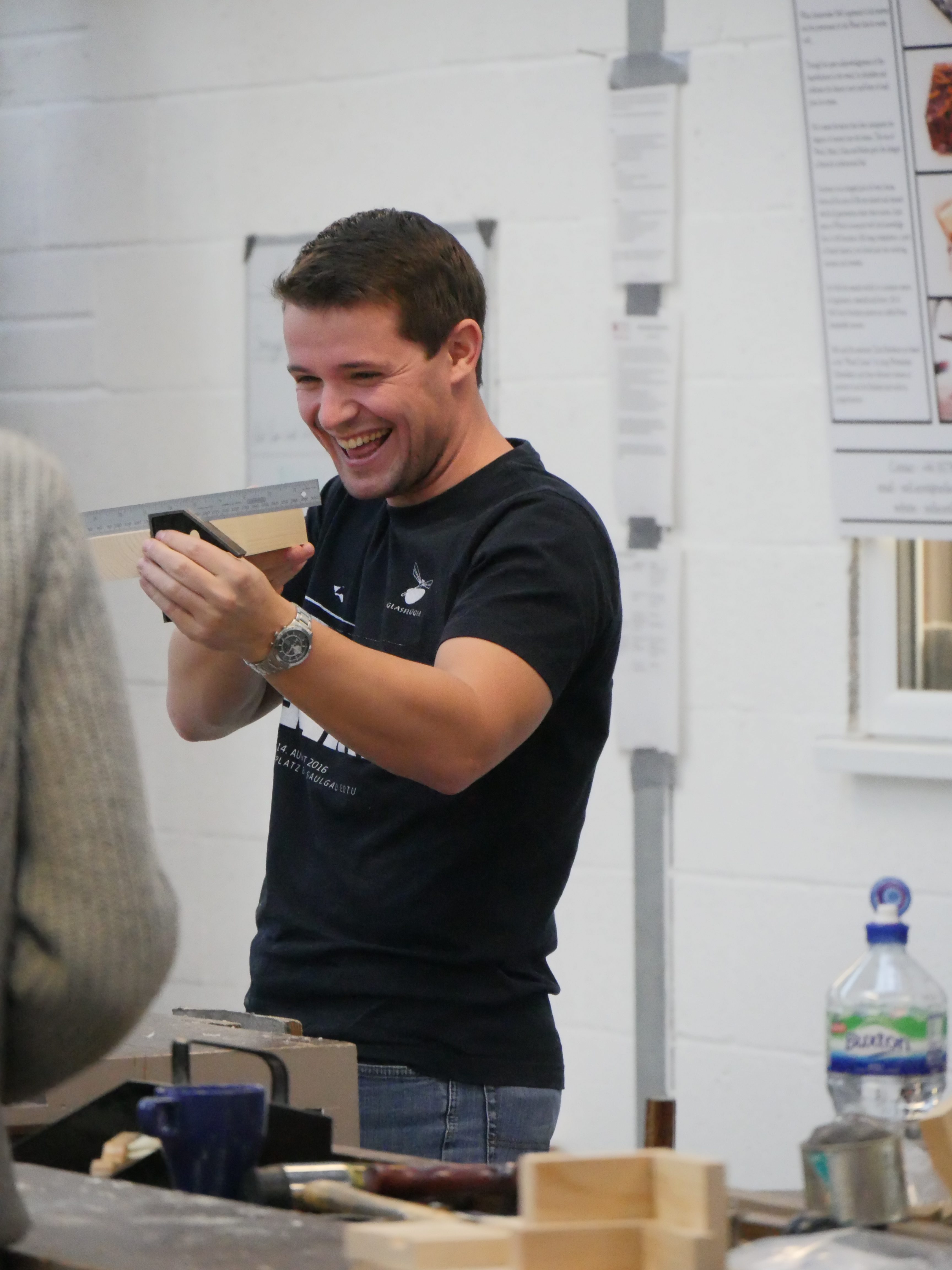 I would like to see more women take the course because I feel more women want to but mostly can’t because of social and family obligations but then too perhaps an apprehension about taking such a course. In the last class there was one women and in this one of fifteen there was one woman. This has radically changed to the percentages I have had in past classes. I do know this though, the lady in this class absolutely loved every minute and so too the men who came. 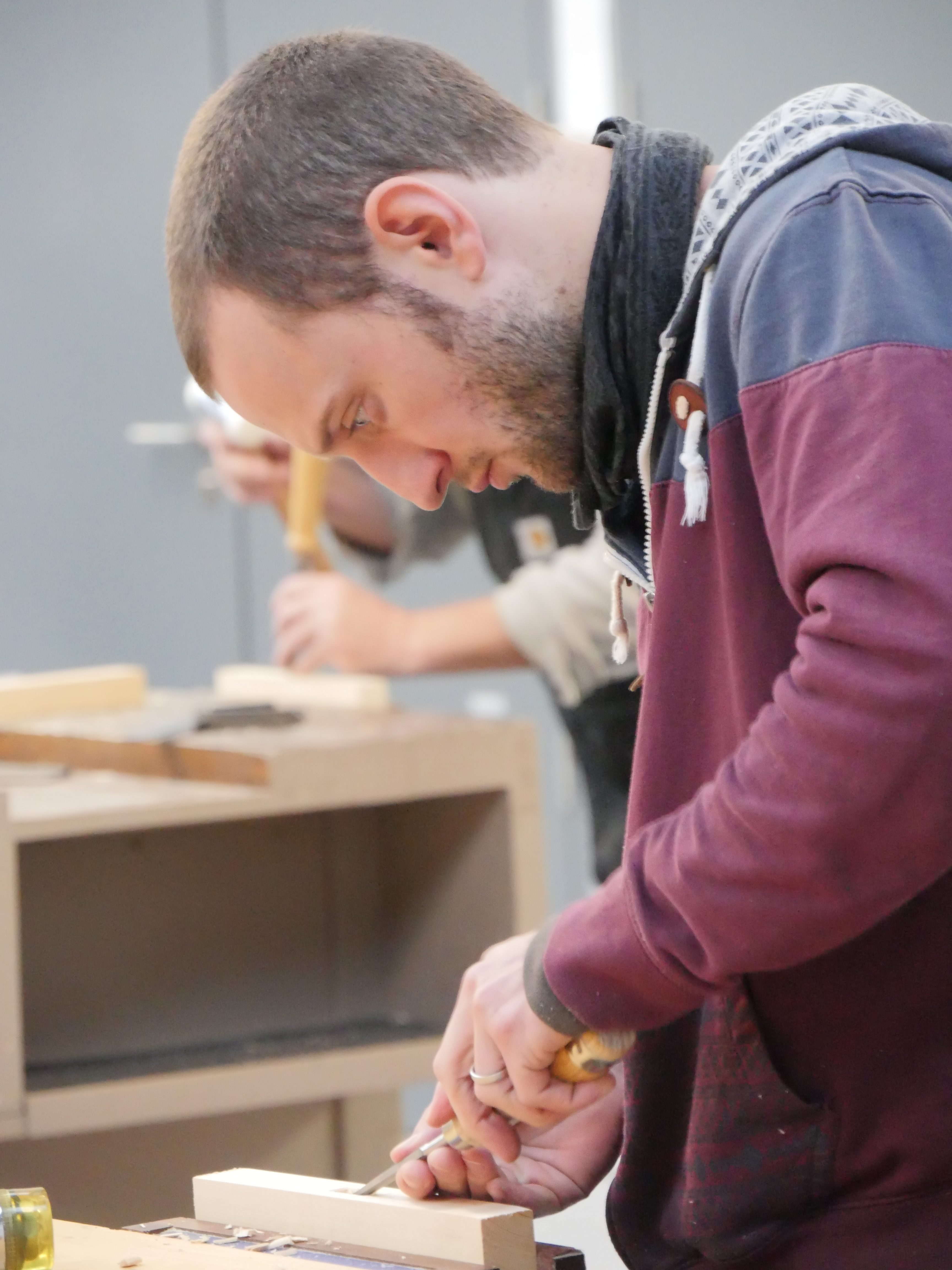 Throughout the day I sensed the electricity passing between the workbenches and watching everyone gaining more and more confidence. For the majority they had never cut a dovetail before and yet in most cases their dovetails came out perfectly. I saw very impressive mortise and tenons too and then of course the variations on the theme. I felt immersed in a sea of enthusiasm and then the smiles came at the end of the class when the conclusion came and we could share the successes. Two go back to Edinburgh, one to university and one to family. Then two return to Holland and another to France. They exchange emails and ask for photographs with their smart phones. They record memories and messages in their own unique ways to capture what this class meant to them. Some brought copies of my book to be signed and some bought one as well. 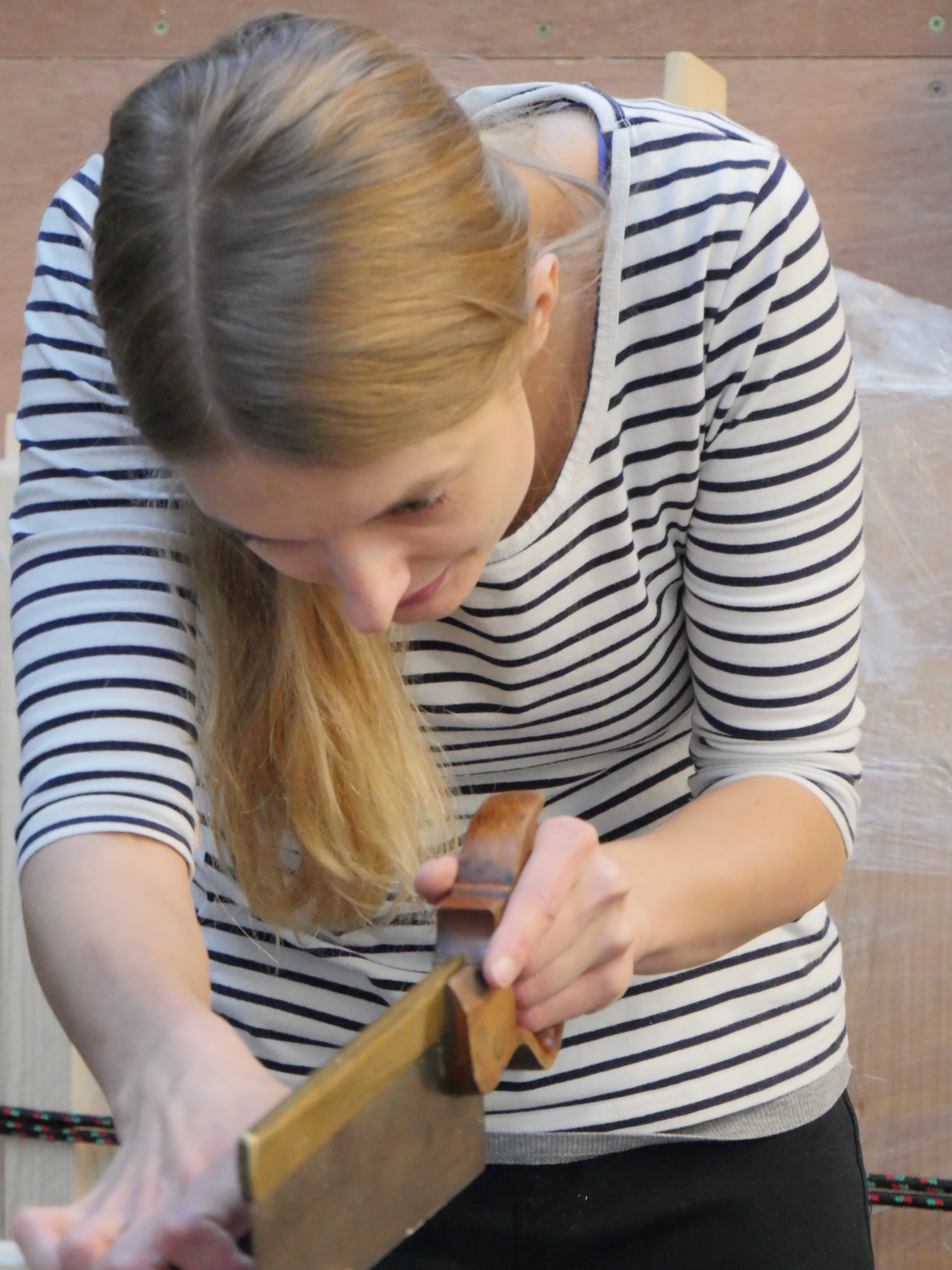 I know some will return and I look forward to that and setting some classes for the new season in the coming year. The warmth I feel from this class will be with me for a long time to come and I am so glad that I don’t teach for any other reason than to experience days like this when others suddenly possess skill and knowledge for themselves.