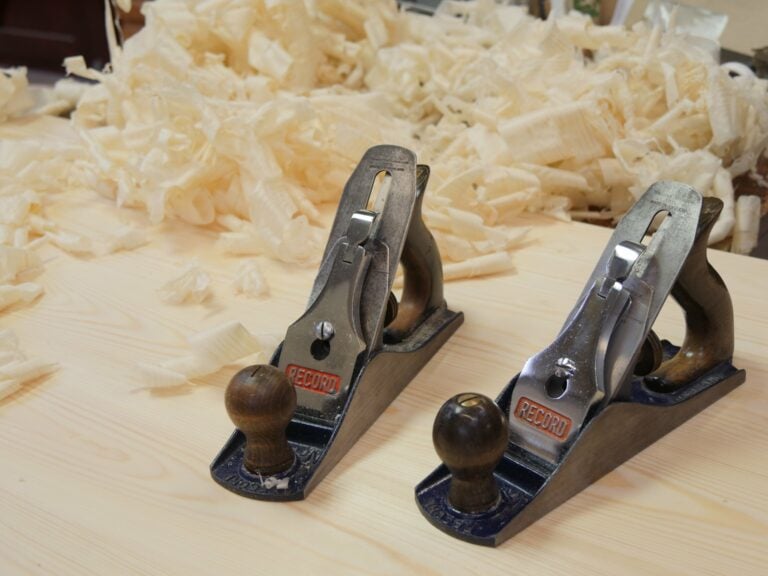 In the beginning I couldn’t think why my mentoring craftsman always used but one plane except perhaps he couldn’t afford two. Then I realised he had loaned me his second one. Of course not everyone uses two planes and not everyone owns two either. I started out with one and then, because planes cost so little and I came across them for peanuts all the time because they’d gone dull and stopped working, I added a second as a backup. Gradually I found myself using both planes interchangeably minute by minute because of what I’ve said below. I actually use three planes sometimes, the first one is my first line of attack coming in as a scrub plane; one I’ve converted from a plain-Jane but rugged and rougher, but still only #4. You can get more info on this on my YT channel here, a second line is a regular #4 used as more a roughing plane though it is not rough in any way itself and then the third, another #4, is a finely set finishing plane. All three are #4 planes. You can find more info on plane set up, sharpening and so on for #4 Bailey-pattern planes here. 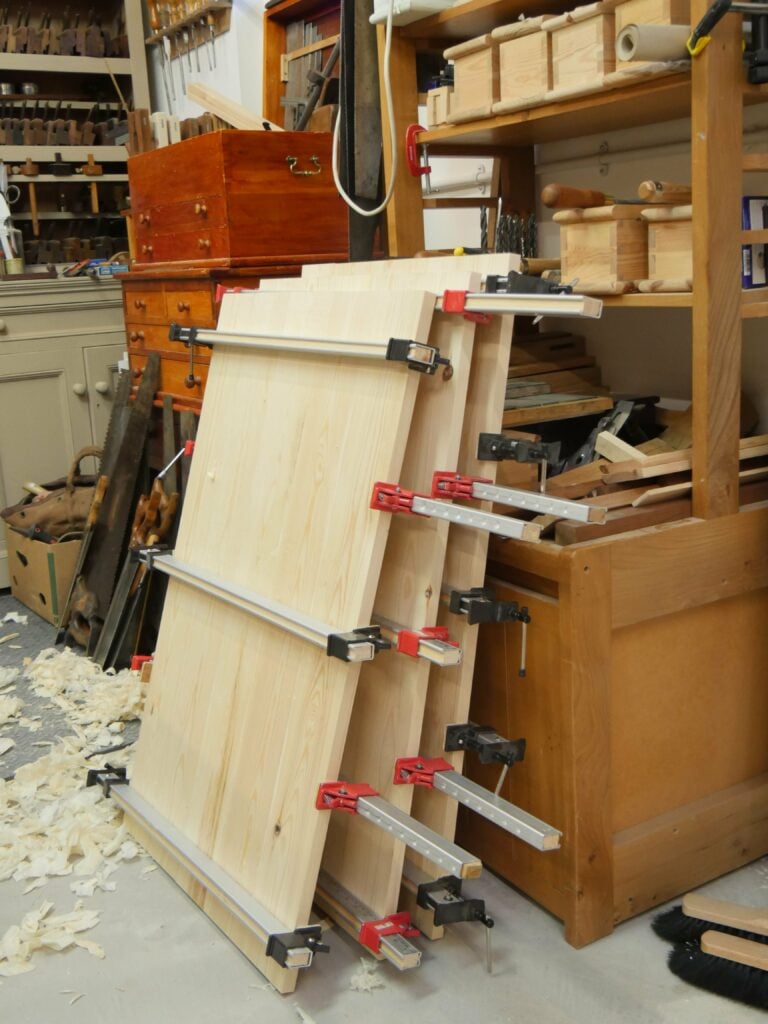 My reasoning goes like this This system works well for me. It is a luxury in some measure perhaps, but it is more for economy than anything else. I do the same with one or two of my other plane types too. 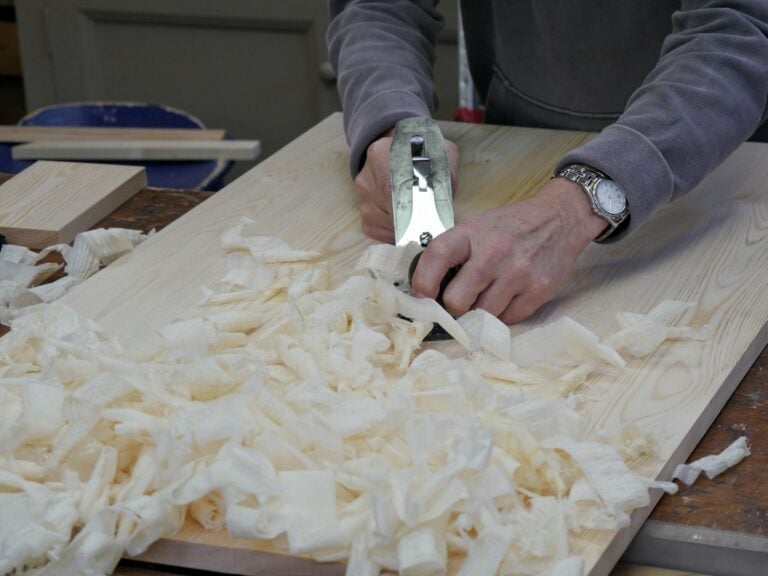 When I sharpen my plane I look for one or two other planes to sharpen at the same time. I do this with chisels during chisel work, card and cabinet scrapers, spokeshaves as well. Pulling out the sharpening plates or setting up for sharpening is generally interruptive but essential. Though it is critical to keep on top of sharpening as an iterative element of the workday, it still trips up the continuity of the work and thereby the energy too. I am so used to it now and look forward to sharpening. The facts Sharpening two planes at the same time means that I can keep one for more reductive work where glue lines and unevenness need a heavier set and a more rigorous approach in planing. Glue snots are removed at this level. Generally I would not necessarily rely on a scrub plane every time, this roughing level can be done with a regular straight iron. I attack glue lines first to remove the protrusions of glue and then abrasive hardness glue often leaves when fully hardened. I then remove uneven heights keeping the same set throughout at this level. 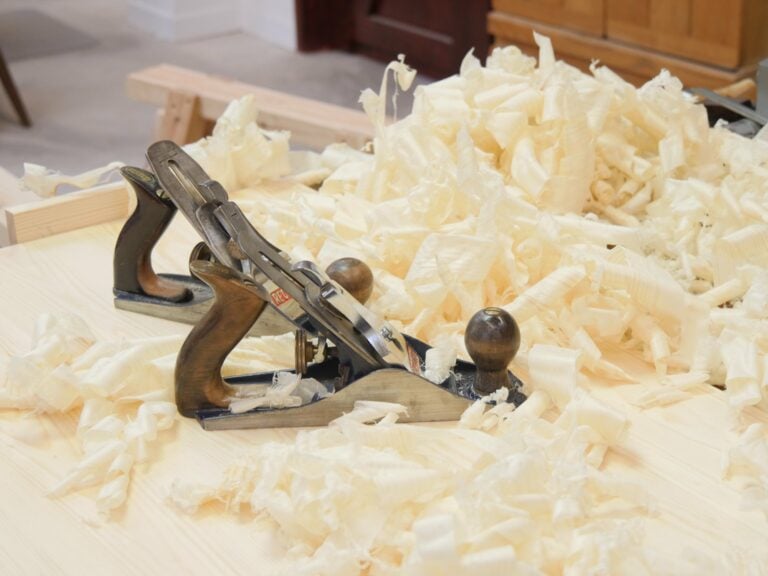 Once the surface of the panel is as even as I want, and by this I mean a level most woodworkers might accept before using say a random-orbit sander, I reduce the set to fairly fine and skim over the whole, once more removing just one shaving width across the panel. From here I reach for my fine-set #4. This one is always set finely and removes the onion-skins for a perfect finish. Generally this produces a surface that needs no sanding. The benefits are obvious. I see wood machinists wearing masks and filters for hours on end in their workshops and wonder why they don’t learn to use planes and scrapers correctly. 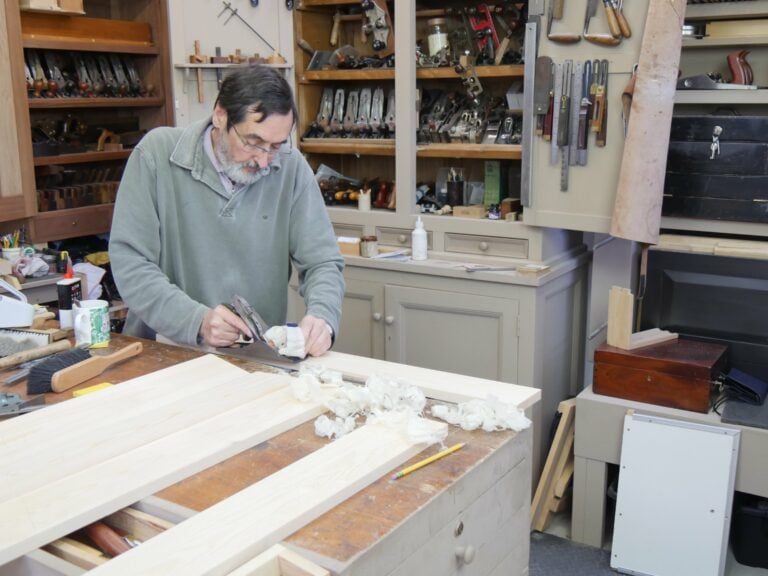 The heavier set plane usually dulls earlier than the fine set for obvious reasons, but I still return to the sharpening plates with both planes for resharpening to a fine level. I can of course use either plane for either level rather than having one particularly dedicated. That way I don’t have to keep track of one or the other. I am always aware of which plane is which because I can see the shaving thicknesses in the throat.

20 thoughts on “Why I Use Two Planes”