Well, in my view, yes! Especially if you do indeed want more from using hand tools than their mechanised alternatives. You’ll be surprised how effectively they work provided you do indeed understand basics manufacturers of mass-made saws usually don’t. We’ll cover that as we go. 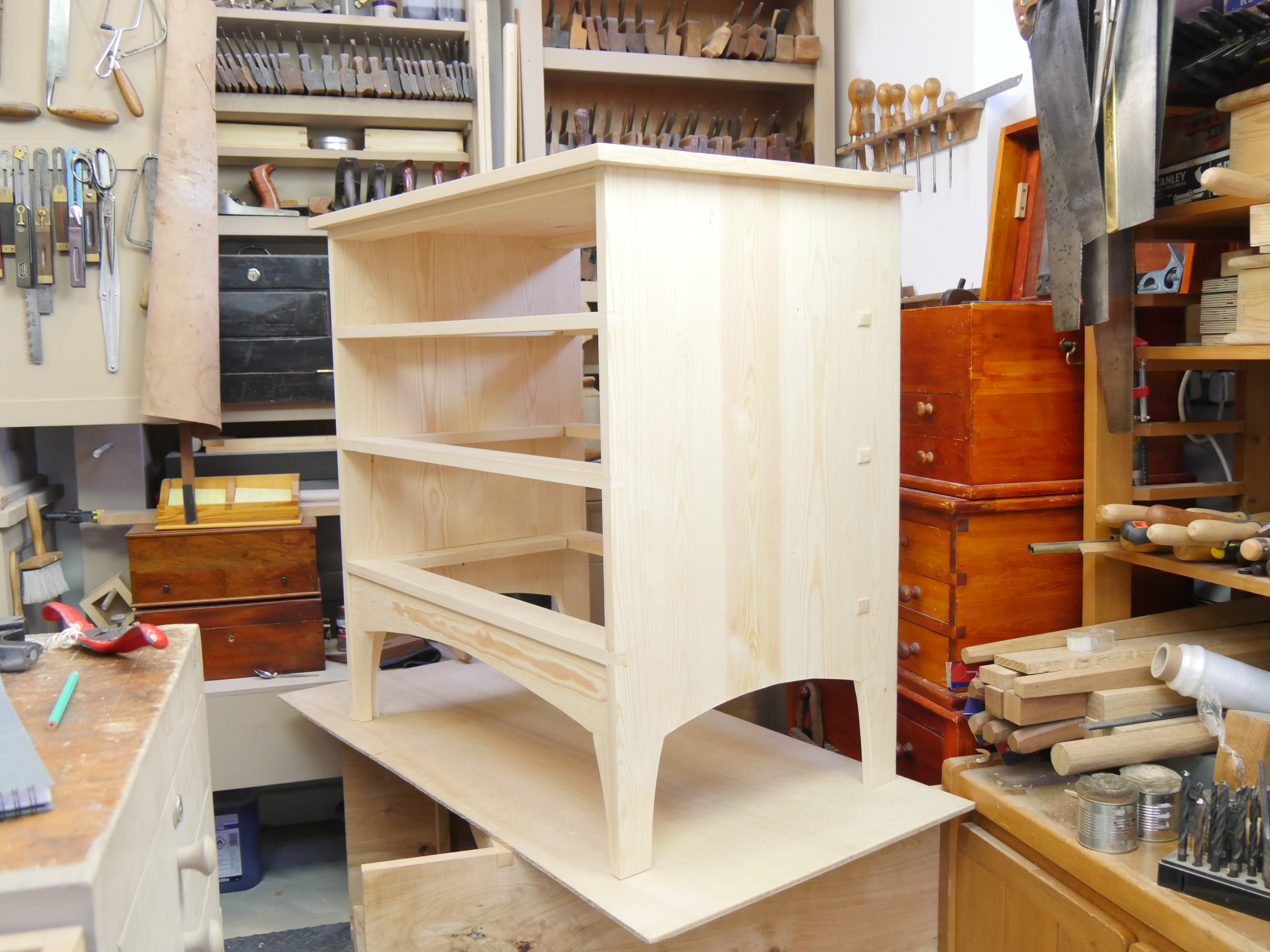 Working on the cherry dresser, er, sorry, “chesterdraws!”, I pulled out my two compass saws and touched them up with the saw file ready for cutting the arching I needed. You may want to know some things from my past to consider what you do into your future. This is about equipping rather than mere nostalgia. These saws cut wood well, but, as with most saws, they must be sharpened to task to cut wood as effectively as possible. That means they should be sharpened specifically for cross- and ripcut operations. Cutting with a compass saw generally means the work shifts from one cut type through a transitional phase into a ripcut. In other words if you are cutting say a circular tabletop for example, depending on the start point, you soon discover that the orientation of the grain shifts as you follow the circumference line. That means the saw you use should generally be changed and that is why a one-saw-cuts-all-view doesn’t work too well at all. Better to change saws at intervals because a ripcut tooth pattern will tear and jibe at cross-grain cutting points and a crosscut pattern tooth will seem like you are dragging through molasses if used to cut along the grain.

Compass saws, a breed apart or a workhorse for curved work?

Compass saws were usually a fairly rough and ready, fairly tough saw, primarily because of the thickness of the saw at the tooth side and then they have fairly large teeth too. Mostly they could be had with a tooth size of around 8-10 per inch and yet the saws were fairly short. You probably won’t find many of any at all with more nor less teeth per inch than that either as they were fairly constrained and punchy saws with regards to functionality. In furniture making and joinery they were used for all types of circular or curved work and mostly in 1-2″ stuff.

The table saw was a different animal but looked similar

Don’t be confused, the compass and table saws are long and skinny both but with subtle differences, nuances if you will. In addition to compass saws thrived an old-order saw we call the table saw. With it’s 1″ wide blade consistent or mildly tapered from narrower at the toe and only marginally wider into the handle, this saw had an exceptionally thick edge into which the teeth were cut and then a very thin spine. This tooth to back taper was what allowed the saw to follow a consistent circular path in the cutting of circular and oval tabletops. Again, this saw too had largish teeth and the teeth were profiled for either a ripcut or crosscut because these too were used for cutting both with and across the grain or indeed a hybrid cut in transitioning from one cut type to the other.

So why the two saw types?

The table saw was a dedicated saw. Rarely would it suit the variation of work joiners did in say stair work with shaped balusters, trestles, scrolls and much, much more. The thicker and heavier table saw allowed extra thrust in the essential power-cuts yet resisted any associated buckling under pressure.

Kneeling on top of the table blank on sawhorses a man could put upper shoulder to maximise overhead cuts. It was effective. Compass saws were finer in section, more slender if you will and lighter really. This is not so apparent until you use them but the difference is indeed there. Whereas table saws would be started from the edge of the tabletop and worked towards the cut line, compass saws were often started from a hole. With a 1/2″ wide point, the toe end entered the hole and could be jab-cut with the first inch or two to enter on into the cut to develop fuller-length cuts using the whole length of the saw.

Cutting my prototype pine dresser (at top) and then the cherry version was quite blissful and near noiseless compared to say power jigsaw. Of course the power jigsaws cut a clean cut with the right blades and it is going to be easier, but there is this inexplicable result from effort and energy coming from muscle and brain that just cannot be matched so I enjoyed my blissful, primitive or even ignorant method, exercised, took hard, deep breaths to feed the muscles oxygen and thank goodness had no need for a gym.

In the redwood pine the saw cut well enough but in the cherry it fair soared. My cross arch cuts I started with a series of small side-by-side cuts opened with a drill-driver followed by a fine rasps to encroach up to the cut line. That way I could run the saw teeth directly to the line and the cut started right where I needed it. Anyway, these saws are still common enough but after this article they may disappear for a week or two.

25 thoughts on “Compass Saws Versus Table Saws-Or What’s the Difference?”