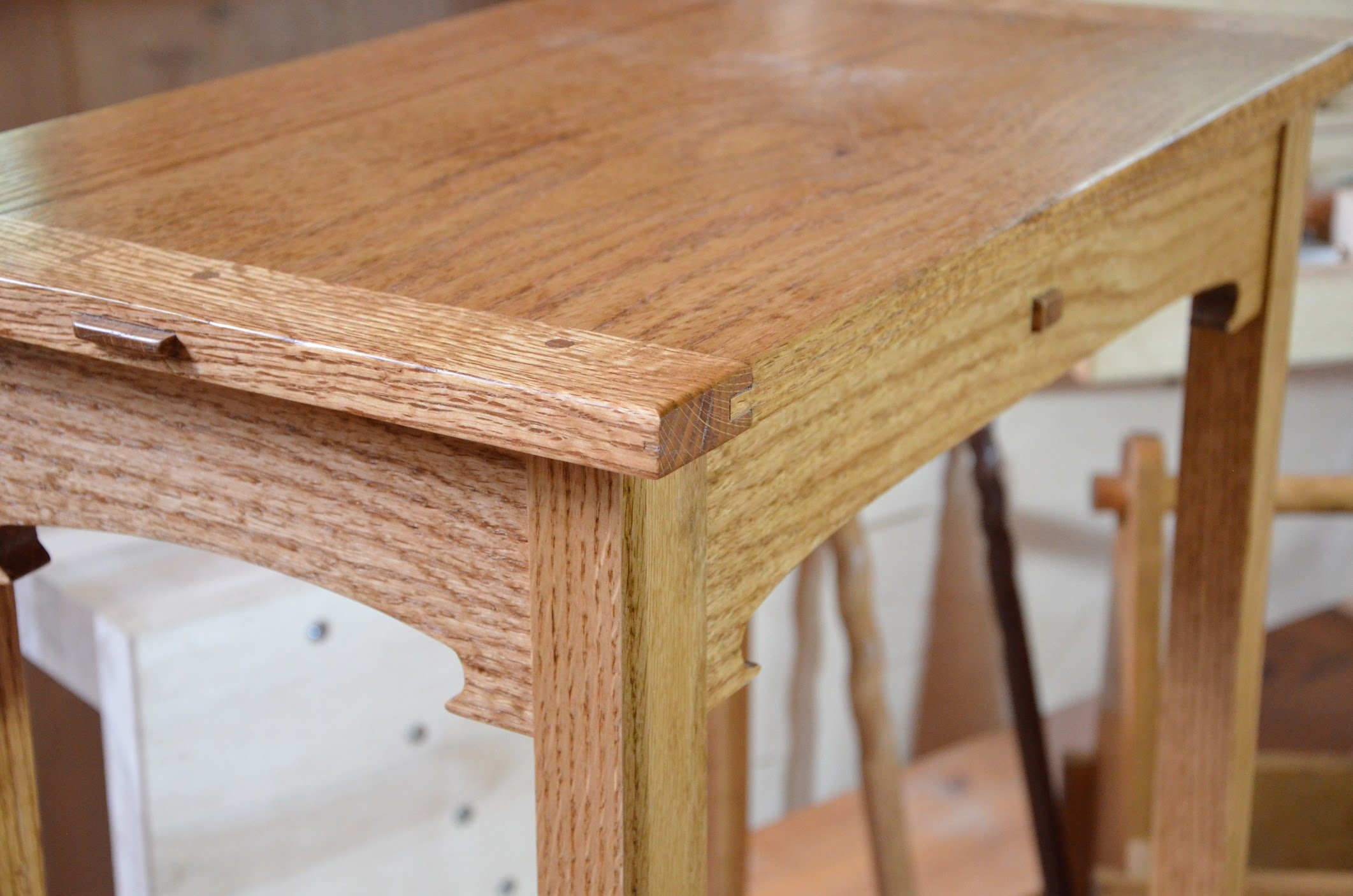 A breadboard end like this adds a certain classic look but has practical value too. I made this as a small computer table a few years back and because the tabletop is hinged for storage beneath, the breadboard ends serve to keep everything true and flat.

I am often asked about breadboard ends on furniture. I think mostly because they do trim out flat tops and tables nicely and they also help to constrain tabletops to prevent movement such as cupping. The main issue mostly is that the width of wood expands and contracts across its width but so minimally in its length it is barely discernible. Therein lies the conflict we must somehow resolve. Adding a very visible feature such as a breadboard end necessitates that we woodworker face the nightmare of opposites cause by counter grain direction. It’s the expansion and then the contraction of the wood you see; where one part must expand and the other cannot. If you install what we call a breadboard end to a tabletop and glue the joint you just might be lucky enough that the tabletop remains pretty static and not expand. But it is chancy and it is unlikely that you will get away with it too. In your own home you have a degree of humidity control and can place the piece to where exchanges of moisture in the atmosphere are kept to a minimum, if you are selling your work though, that is less than likely. Few things cause a more daunting thought than a phone call saying my tabletop’s split! What to do? 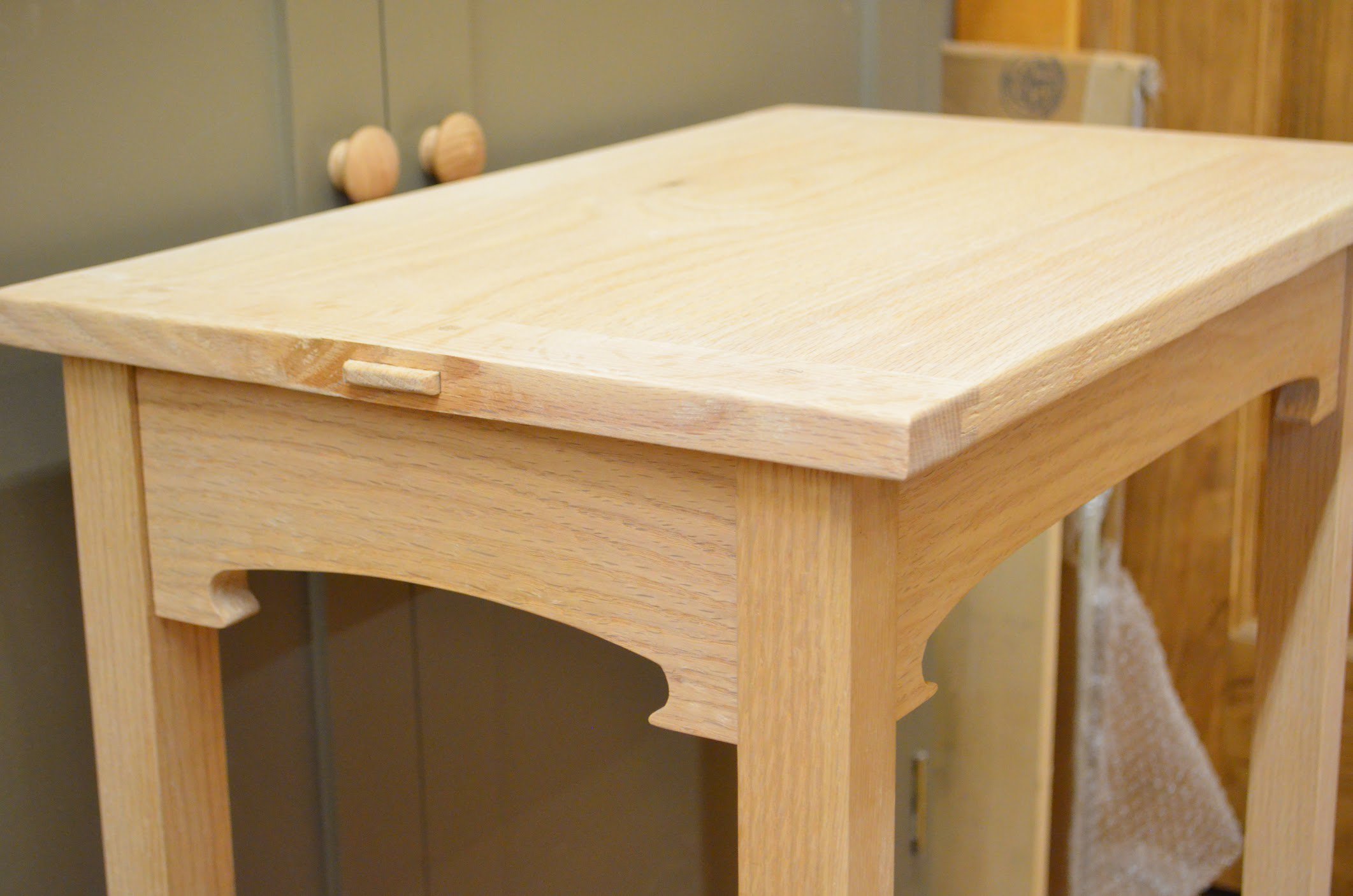 My tabletop here and at top is not the size of a desk or dining table. It measures 15″ in width whereas a dining table will be perhaps as wide as 42″ and a desk nearer but not restricted to 24″, plus or  minus. At the upper extreme a tabletop can expand or contract by 10mm though more likely, if dried well and made with the wood constrained by hidden tenons within the breadboard ends, as in my case here, it will not decrease because it is rare that work and home atmospheric moisture content drops to levels that affect the wood. Constraining wood between fixed points means that the wood is prevented from absorbing levels of moisture it might be able to if free too. Think compressed sponge wicking up moisture freely from a saucer and then compressing and constraining the sponge in the same saucer filled with water but held between immoveable cauls like say the jaws of a vise. The sponge absorbs still, but not the same quantity because it can’t expand. 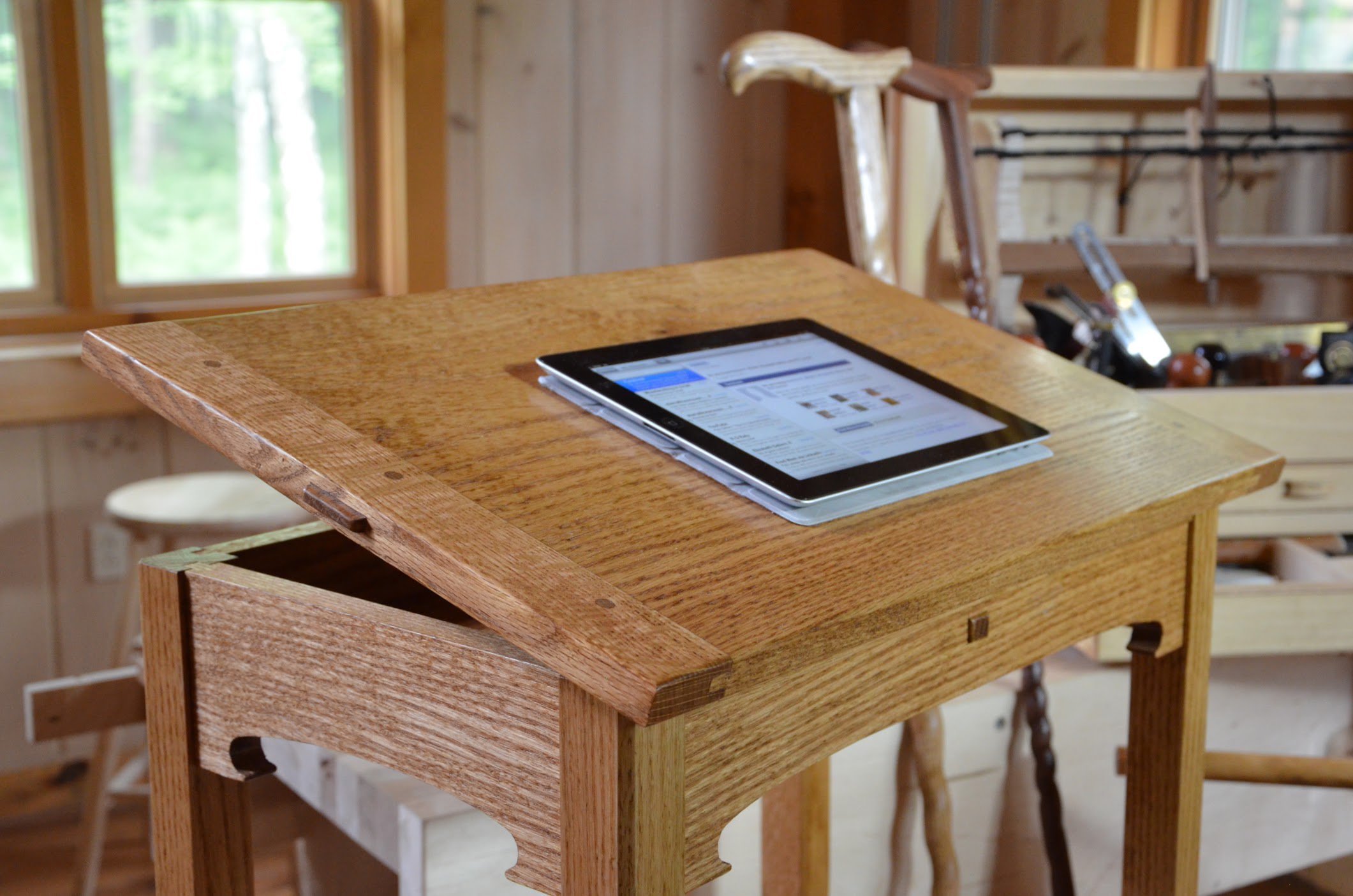 In this design brief the tabletop was to elevate for stowing a laptop, keyboard and other such paraphernalia.

Breadboard ends serve two purposes. One, the groove in the breadboard end, if indeed it’s the breadboard end that’s grooved and not the tabletop, which indeed it could be, keeps the main tabletop flat and it does this, one, by the strength of the walls of the groove and two, the application of the breadboard end slows down the intake of moisture into the tabletop through the end-grain itself which if left uncovered absorbs moisture very readily. Of course it also releases moisture readily too. That is why placing tabletop end grain adjacent to any source of heat is generally a no-no although people do it all the time. Radiators and stoves, sun through a window, things like that, can cause furniture to crack and mostly this is because the central section of the tabletop retains its moisture content levels. It’s this discrepancy in levels that results in splits but even so, there are special methods that help out if we want to use breadboard ends.

Choosing breadboard ends is a good choice in my book, although I have used them mostly on more special pieces. They go back a long way and of course its name implies where it was used most. Some years ago we made a favourite piece of mine when we replicated a breadboard made from sycamore belonging in the kitchens of Penrhyn castle where we used to have our workshops. My very favourite piece using a breadboard end on a wider piece was when we replication an early table that just taught and taught me so many things about woodworking. 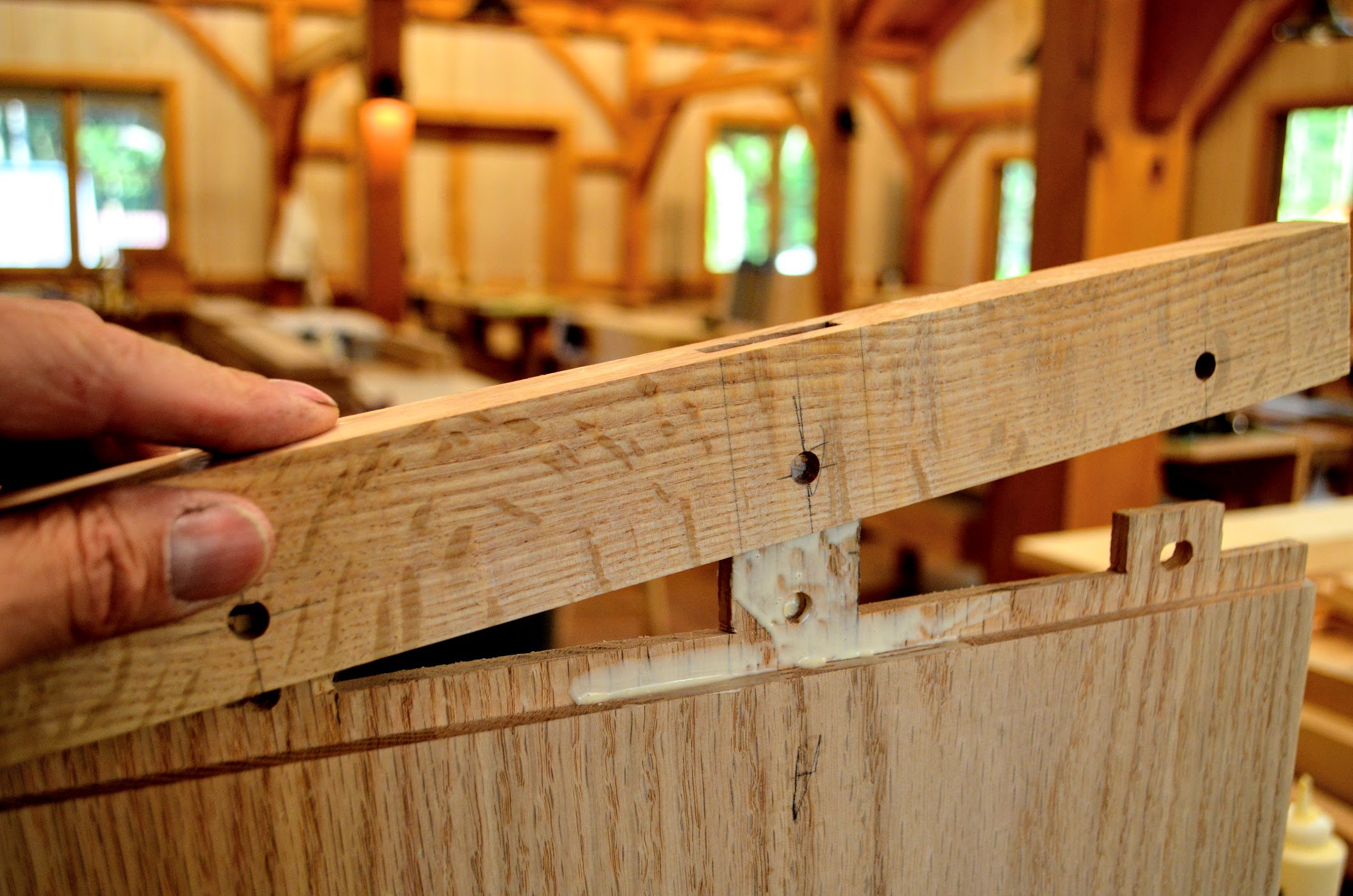 The centre peg hole is a true draw-bore pin technique dead centre on the centre through tenon. The outer two draw bore holes are elongated to allow the main top section the ability toe expand and contract. Anchoring the centre section by the fixed means of glue and pin means expansion is evenly distributed to both sides. 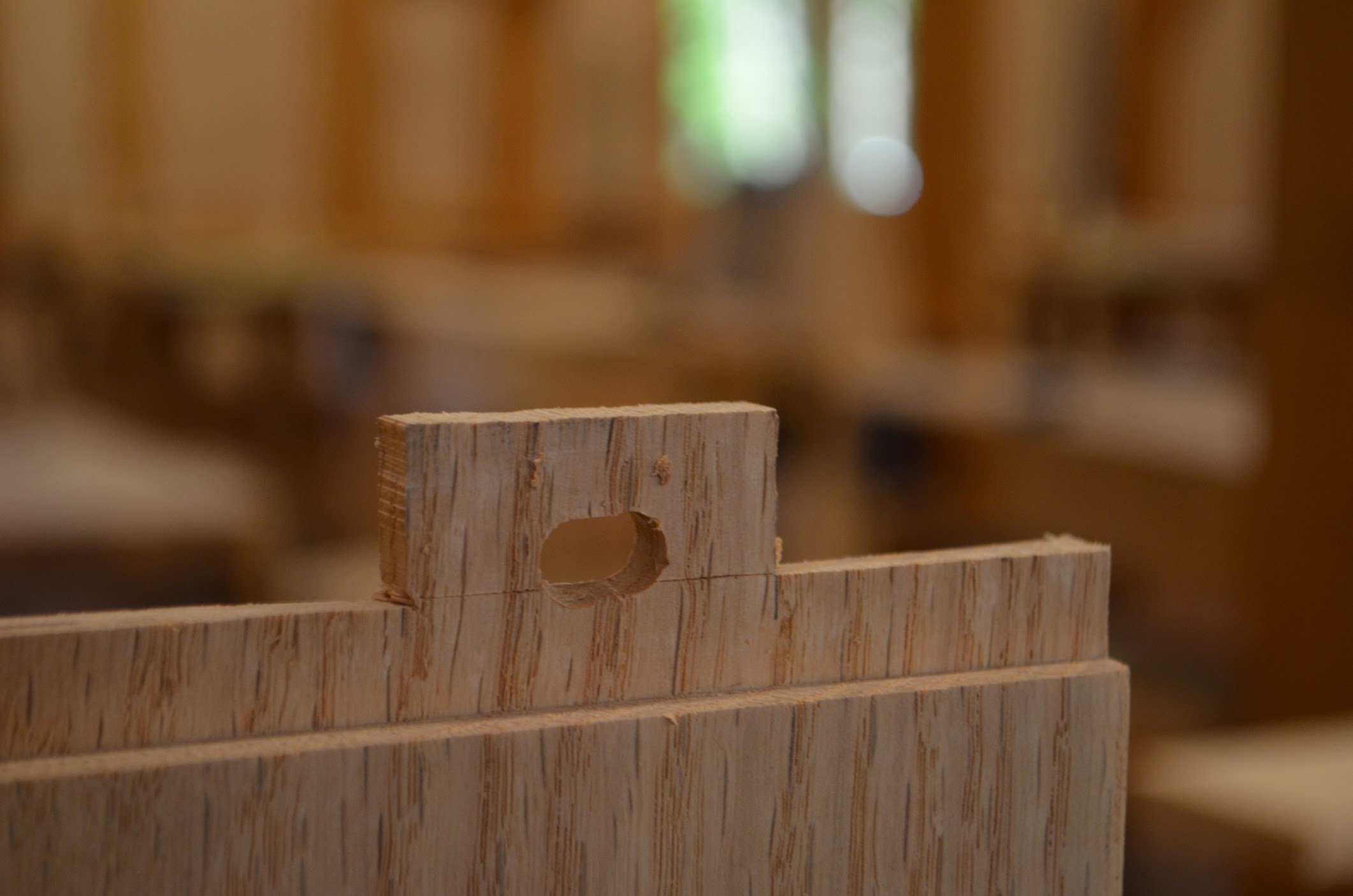 Here you can see the elongated hole which can be as wide as you want as it is never seen and makes no difference how oversized the elongation is. 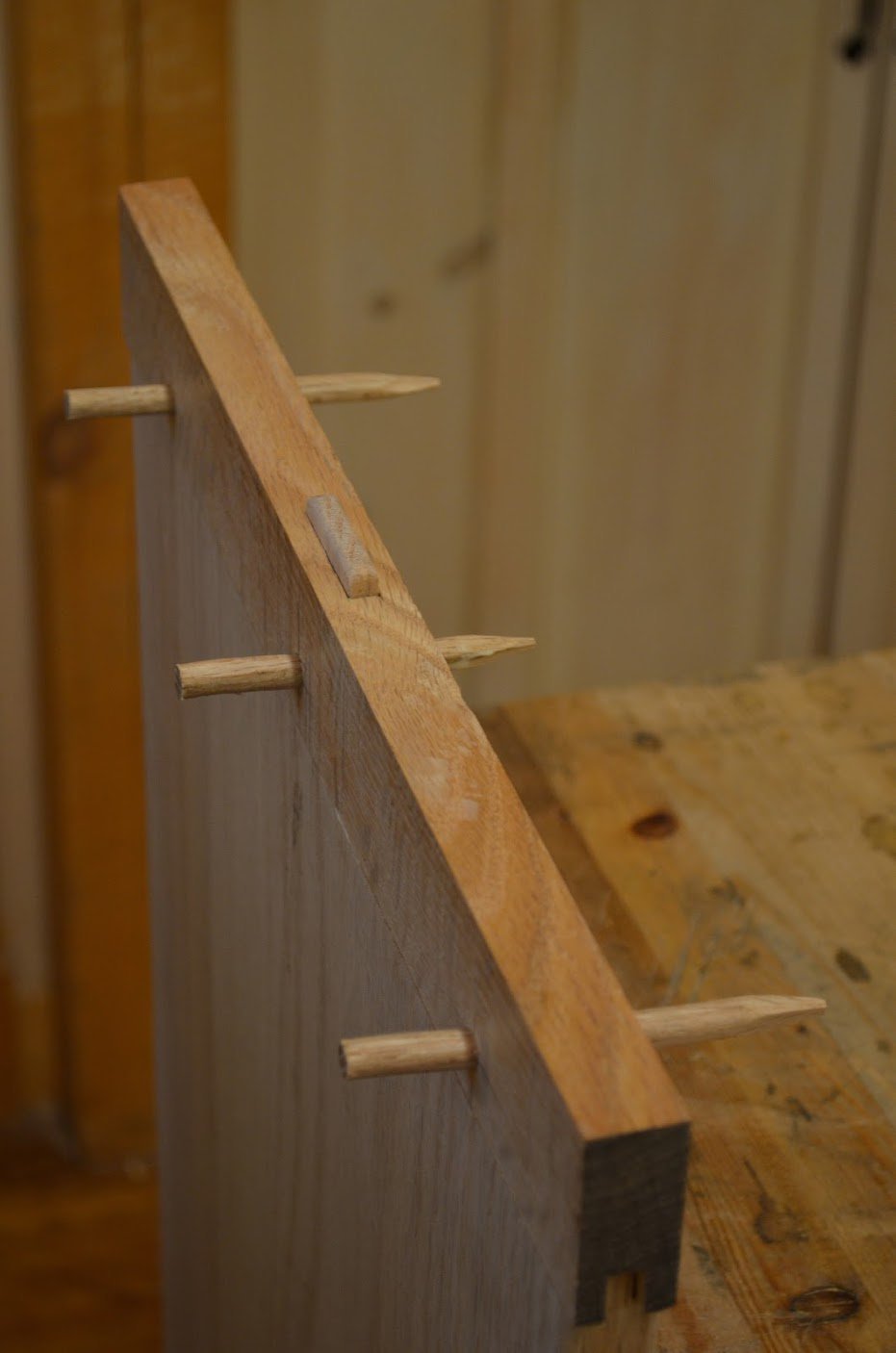 Make the pegs longer as it takes little extra work to make them and cut them off.

For the table I was making I glued and pegged the centre section and that was to keep the tabletop and breadboard ends centred, so that expansion and contraction took place evenly either side of the fixed centre point. To the outer extremes I created elongated holes. The piece was made in 2012 and since then the wood seems to have settled. There is barely any discernible difference at the extremes of the breadboard ends and the tabletop is always dead flat and the joint lines are always tight. In this case I made the centre tenon a through tenon but then, within the breadboard end, I added two more tenons either side. See how I glued the mid section

Making the pegs in a drilled hole or washer is about as good as a dedicated peg maker.

Oh, the prototype desk I am making just now will knock your socks off. I am just loving the design and it is going ‘nearly according to plan!‘