From my Journal Saturday 15th April 2017

I left for Portsmouth, which sits but 1 ½ hours from my home, for some private study and rest time bathing in the history of woodworking. Portsmouth is a port city and naval base on England’s south coast, mostly spread across Portsea Island. It’s best known for its maritime heritage of famed ships and boats restored, housed and maintained at Portsmouth’s Historic Dockyard. Home to the National Museum of the Royal Navy, the wooden warship HMS Victory is permanently berthed in retirement here, where Nelson died in the Battle of Trafalgar, and HMS Warrior 1860 also stands testament to Britain’s fighting past. All that of interest too, it was the Tudor ship Mary Rose that drew me to this shore and harbour. In a dark and austere shell-like building developed to house its massive carcass, the Mary Rose has been brought home to rest her weary body as a conserved remnant of war in what has become a dockyard museum.

For the first time in weeks the sky was cloud-covered and greyish but had intermittent splashes of lovely blue. I liked it because it was cool but airy, even though perhaps not the best day for dockland visits. My plan to visit the war ship of Henry VIII and then other war ships might not be as bright as I thought but for months now, I had hoped to make the journey south. Beyond its amazing frame of wood though, inside and hidden for half a millennia, lay the true purpose for my visit. I wanted to see with my own eyes just what was on board the ever-famed Mary Rose at the point of its sinking hulk in the mid 1500’s.

The ship was lost in a manoeuvre to shift from one broadside facing French invaders threatening England to its opposite broadside, having fired all one side of its canons and exhausting its payload. If it turned and presented the other guns it might well send the marauding French armada on its way. In the maneuver though, the great ship lost all advantage. No one knows what truly happened, but in the scurrilous assault 500 seamen and boys on board were lost to sea.

Inside the great vault of the museum, lights play on the walls of the ill-fated yet legendary ship. It first feels and looks like a massive cave or cavern. Cavers will know what I mean if they’ve gone down a pot (pothole) swam down a tunnel and come up into a massive cavern filled with stalactites. The ship seems to stretch up and out like that; far beyond imagination. If indeed your interest lies in wood at all, this place is just fascinating. But boat building, fascinating though it is, was only a small part of my penchant to be there in the bowels of the ship. It was not so much the building the ship but launching it, manning it and fitting it out. This ship relied almost totally on wood and metal. Within its constructs was an absolute sphere of life-independent, a vessel if you will that held life and soul together, relying only on its construction to hold itself bobbing and storm tossed on the seas of the world.

When the Mary Rose sank she landed deeply; the seabed mud swallowed her almost all-consumingly into its well-hidden depths. At first thought it seems so negative but then you realise that in essence it was this muddied burial site the provided a measure of protection. The ship lay protected from the swells, tides, currents and sea life surrounding it. Half of her side was preserved deep in the mud, which kept the wood and contents as safe as possible under the circumstances.

Most metals corroded all the way away, others, bronze, even pewter and such, were 500 years beneath the sea but survived, in part anyway, for us to look at today. A cannon of wrought iron was the pivotal turning point of discovery when divers recognised it for what it was. The ensuing work to raise the Mary Rose was soon to begin.

The museum takes you through multiple floor levels adjacent to the ships hulk for you to witness the mass of the ship. The imagination of any woodworker runs riot even though you can’t actually get within 50 feet of actual wood connected to the ship’s body mass. But imagination is a marvellous thing and you definitely see the work of visionaries. This ship, built from 1511 onwards, worked as a warship at sea for 33 years before its fatal day in 1545. Though its location has been long known, the technology needed to retrieve it intact as much as possible didn’t arrive until the 1980’s . the Mary Rose came back into daylight for a brief time when a huge steel frame was built to undergird her great mass from sea to shore. The frame remains as backstage support as an external skeletal structure. The darkness in the museum is atmospheric as well as protective. Climate control is imperative for the wellbeing of the hull so the dark history of the era seems to be reflective of the era and causes deep reflections as you look over from the balconies. It’s much more than just, well, plain interesting: more deep. 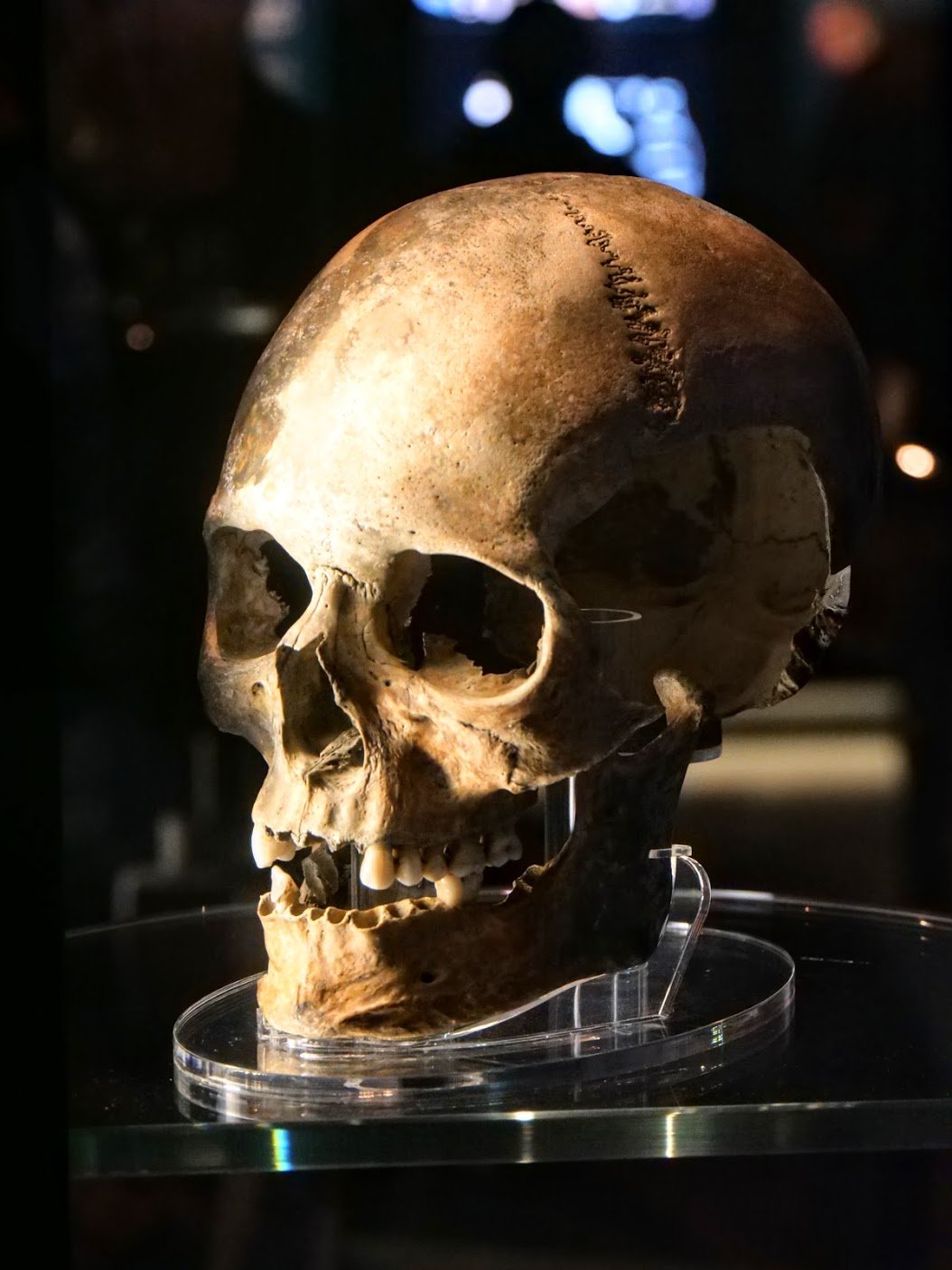 Whereas some parents gave their opinions to their young children, and imaginations coloured the truth and reality, individuals did seem deeply reflective facing the truth about protecting kingdoms and what it took to do that. Imagine training every day for decades, beginning as a young child, to become accepted as an archer and then having your whole life dedicated to such a task. I mean to the point that your spine develops its own twisted curvature identifying your bones as the bones of an archer 500 years hence. In the multi-level museum dedicated to stowing the huge carcass of the Mary Rose, you pass along glass-walled corridors from which to view, and listen to interpretive media of life on board at the time. Limbs are lopped off by surgeons on one level while limbs are spliced in by ships carpenters on another.

The bones of the carpenters dog were discovered at the entrance to his workshop. Swimming out of trouble wasn’t an option even for him.

I have much more written but I just wanted to say, if you get half a chance, do go to the Maritime Museum in Portsmouth and support the great work they have done so far. There is much more to do yet and it is more than just entertainment. Here is the link for more information. You can easily spend three or four days there alone.

19 thoughts on “The Mary Rose Emerges From the Deep”