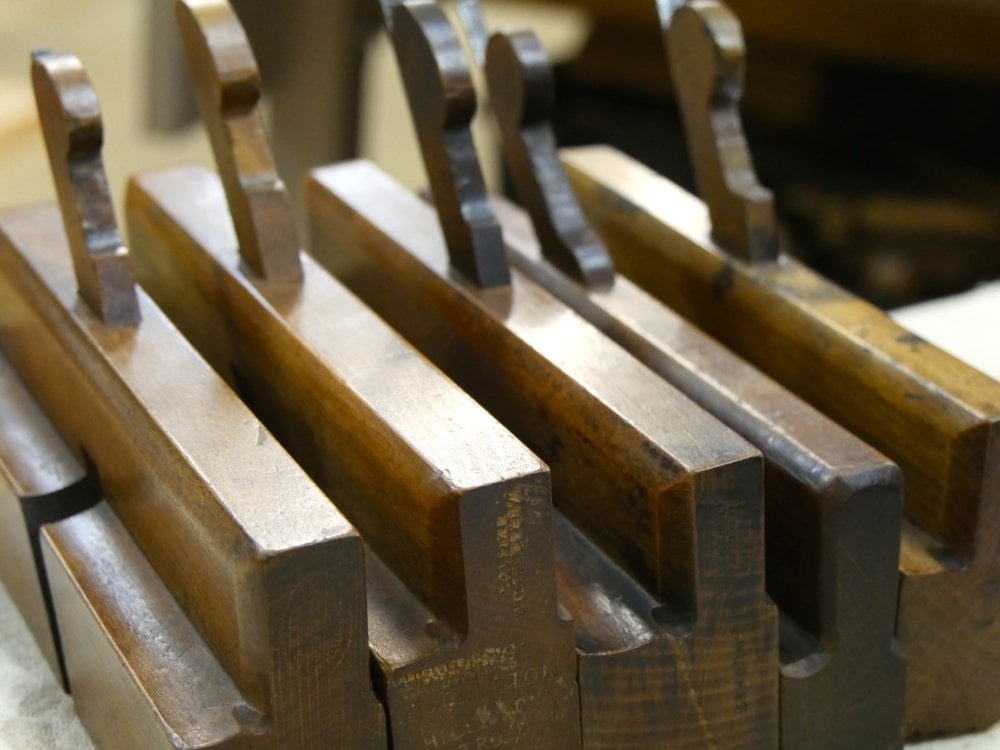 Collecting and restoring moulding planes like these is fun but more than that even is you end up with very handy planes to create short runs of moulding. They usually sell for around £10 via eBay here in the UK and any given day there will be 200 for sale to choose from. Amazing if you think about what you get for so small an investment. Don’t think that they don’t work either. You’ll be surprised and you’ll learn a lot about wooden planes in the process of restoring them too.

The saying goes that, “There is no fool like an old fool.” but it often seems to me it’s mostly in the negative vein of disparagingly criticising the elderly when they make mistakes or poor judgements. In a more positive vein, to counter the culture that espouses all new equipment as the progressive way forward, and, as it is in many cases, there is often no tool like and old tool. Moulding planes on most woods readily create a much needed six-foot length of pristine moulding in a heartbeat and you don’t need abrasives to remove the rotary cuts or burn marks machines leave in the surface either. Of course a thousand linear metres of the stuff comes best from the spindle moulder or router, that’s true, but for me, moulding a short run for a 12″ rim or lip, it’s an excess to set up the router, run the mould and then clean up afterwards. It might surprise most to know that only 5% of the cutting power of a router or machine is actually used. The rest is excess. In industry it can be a little different. Feed rates are measured and matched to the rotation per foot run, but in the home shop that’s not the case. I often hear table saws, routers and extractors running for minutes between cuts.  I’ve done it myself. 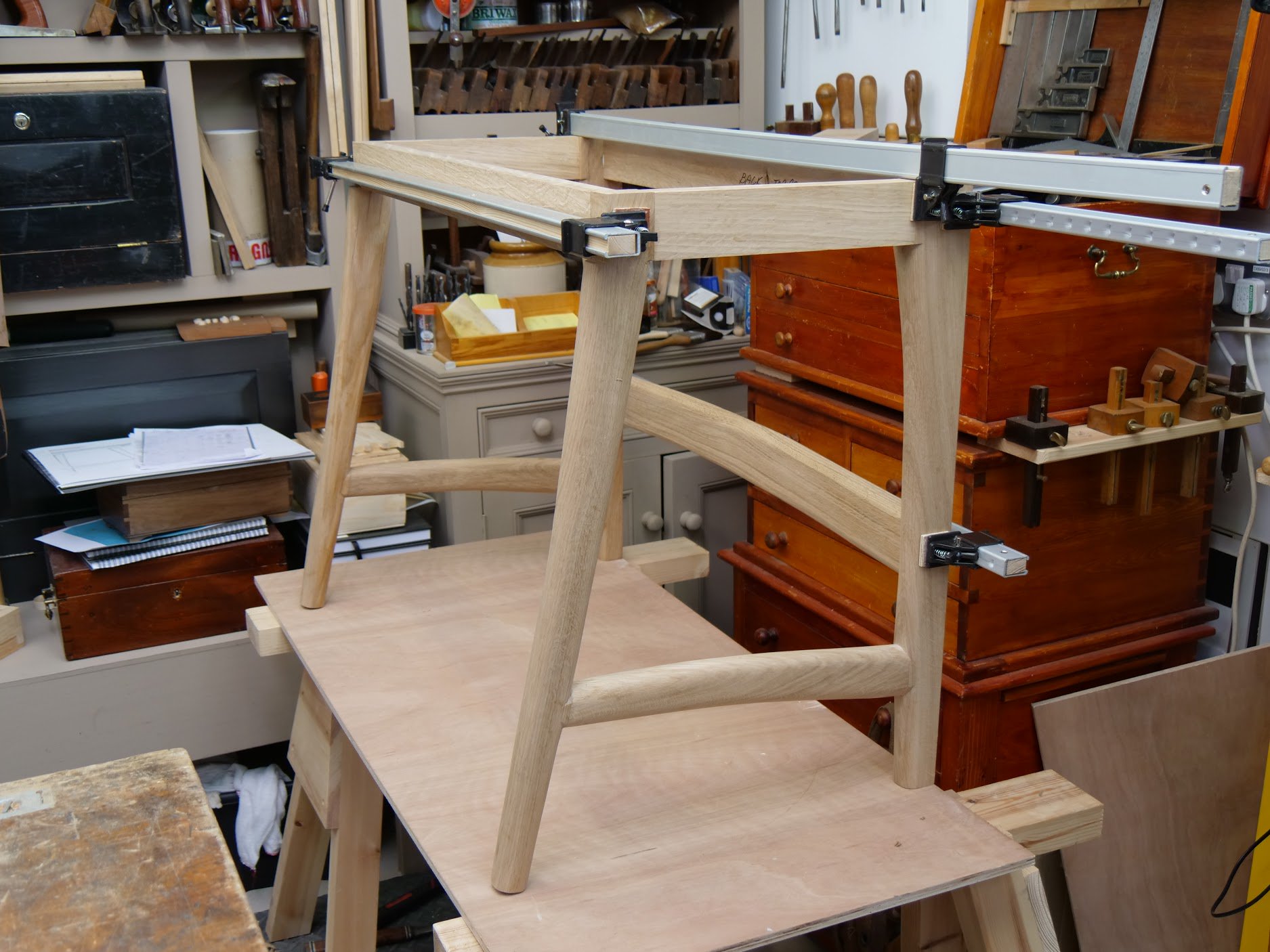 I used a combination of two wooden spokeshaves to shape the leg frame for the undercarriage here. Such beauty in use is very fine, and then therapeutic working goes with it all too.

Yesterday, working on my prototype, I formed a bevel 2 3/4″ wide by 1/2″ deep on the underside of the desktop with a vintage spokeshave made around 1880. Cutting the bevel might have been done on a table saw with the board stood upright and the blade tilted to the appropriate angle, but, because of the curved front, that would have made it impossible and highly inefficient. It would have worked on the end grain cuts but, well, it took me only a few minutes with the spokeshave before I was done. In this work I use the old spokeshave because I could remove thick, wide and heavy swathes of wood with a skewed presentation that I felt to be regulated and in control of. The tool allows me to refine the strokes and the thicknesses by a simple tilt of the fore edge to take less or more as I wanted. With its massive and quite unusual 4″ wide blade, my spokeshave allows for a virtual full-width cut when needed. Combining this now ancient tool with the converted Stanley scrub (Video on this here) gave me very refined definition but then following through with the smoothing plane, an older Record #4, and the under edge of my desktop needed no more  refining work. 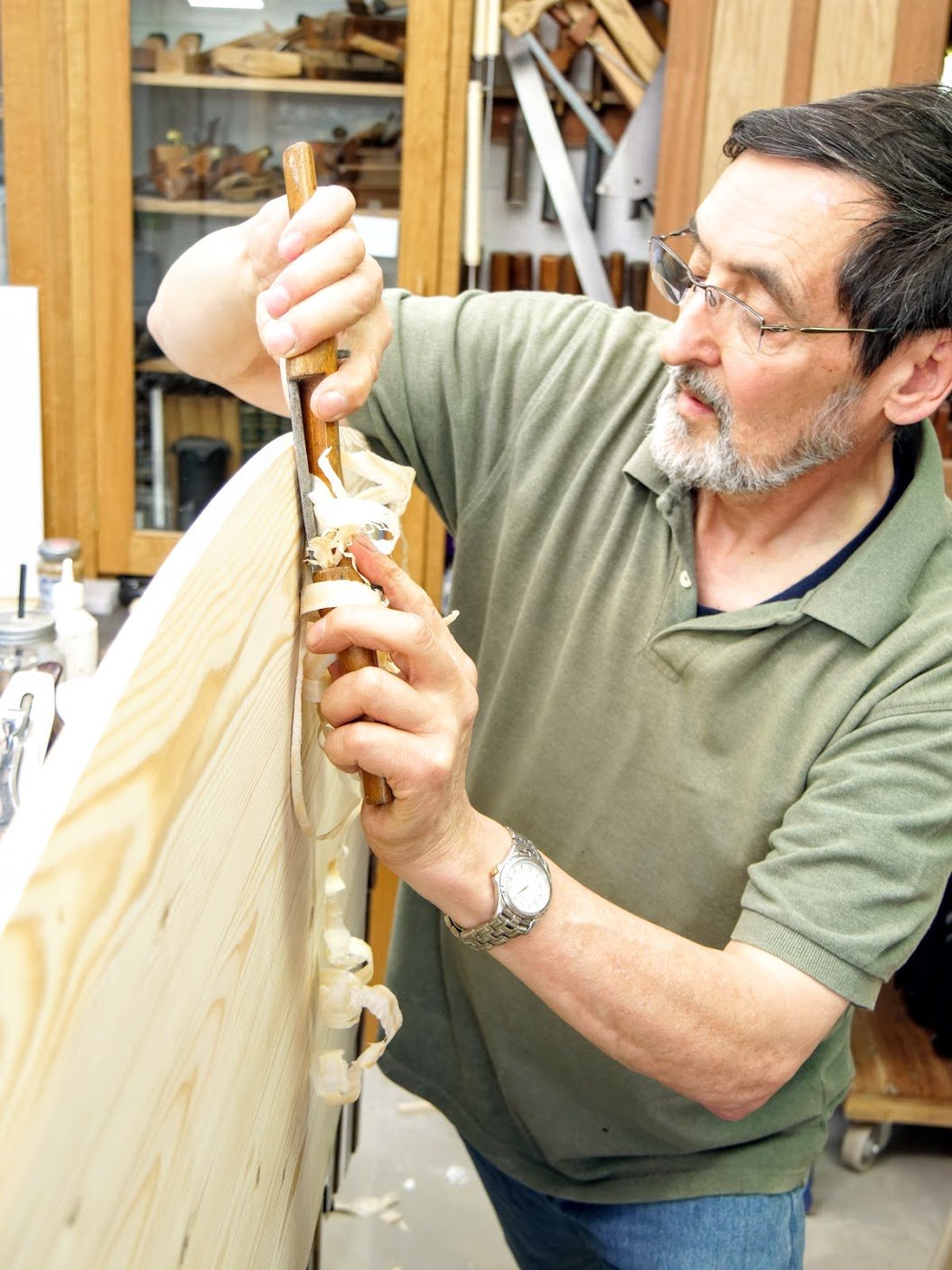 A wide spokeshave is hard to come by, but narrower ones wiil achieve the same end result, just less quickly. We may well make a simple version to work with if you are a subscriber to woodworkingmasterclasses, which is free. 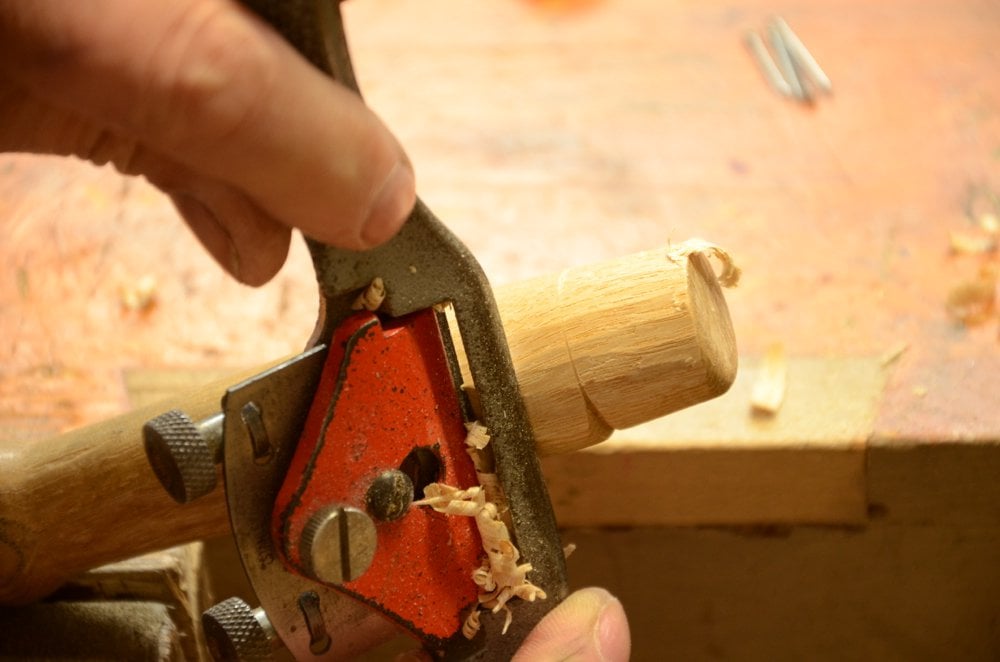 No matter the maker, the #151 model is a good, functional tool to work with. Just not as fast or with the same quality as the wooden versions.

When it comes to the end-grain the spokeshave, scrub plane and smoothing plane all ensure good production matching the long-grain, curved front under-bevel. Actually, better. The advantage the vintage models have is that the blade itself is the actual sole of the plane whereas the #151 types have evolved more as a plane with a main body inclining the bed angle of the blade as with a plane and thereby necessitating the element of a sole, albeit short. That said, the #151 will get it too, just not with the same alacrity. I say all of this because it shows how hand tools can be adapted to tasks they might not always be considered capable of. Oh, and you might be forgiven for thinking this only works well with pine! I did the same with the oak top too and achieved equal results just as readily.

I always keep my rag-in-the-can oiler handy on the benchtop which works well on spokeshaves used for this work too.