To read more about sharpening tools on our Common Woodworking site, click here

You can skip the next three paragraphs deliberating on freeform and conformity and get beyond my opening ramblings if you like. 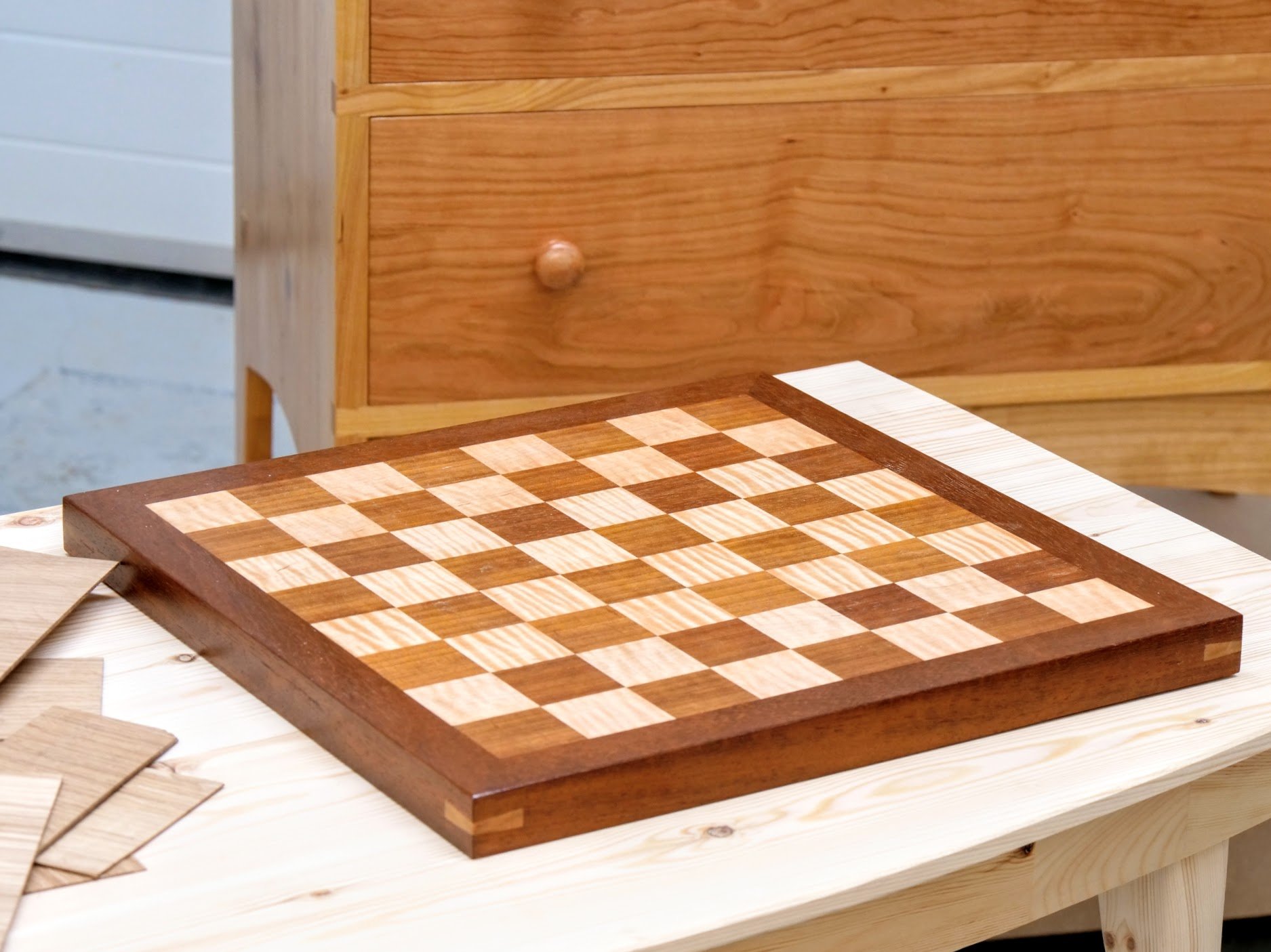 It’s funny how we live in cultures where on the one hand we want boundaries, you know, to know what the parameters and limits are, where we stand and such, begin, end, stop, start and such that make us secure Then on the other hand we reject any and all limits and restraints because we don’t want constraints others feel secure and safe in. Freeform makers usually don’t like conformity, uniformity and such, nor do they like to replicate anything that exists in a repeated or repeatable way in any form. On the one hand it’s the kind of randomness you might find in leaving the edges of wood just beneath the bark to its natural unpredictability. This we once called wane or waney edged. In some ways it is a non-conformity many accept, but it can be a rejection of standards too, and then it can simply be an expression of rebellion to many things they might see as strangling. It’s a response, you know, “I ain’t doing anything unless I do it my way.” I suspect we have all felt a little of that at some time in our lives. I’ve learned though that if you can take stubborn rebellion and change it to determination, success of some kind is just a step or two more away. Good results often come from working within the limits and boundaries we want to reject, and checks and bounds often prevent disaster.

Refusing the constraints of proven technologies

I once watched a stubborn and defiant youngster new to woodworking as he continued to make a dovetailed corner to a box going along the grain for both tails and pins in the very wrong direction. I had told him before the cuts were made that this defied the natural limits of his material and that inevitably one or all either pins or tails or both would snap off as the result of such work was just weak. It wasn’t even that this work was just his experimentation but more that he didn’t want to comply. As a craftsman I have learned that being compliant, and by that I mean supple, I am better able to understand my materials, my tools and my own body; the three essential elements that must line up to produce exemplary work. But I really don’t mind people pushing the bounds, testing the fences and such, that has been how our discoveries good and bad come. He told me unequivocally that “no such thing could possibly happen and that I didn’t know anything.” So, unhelpable, I watched as he raised the square and blocky mallet and before he struck suggested something a little softer, more absorbing but Kerpow!!! Those pins and tails popped, pinged and kerpowed in every direction like corks from a fizz-shaken bottle. He tried another corner and then again the third with equal failure. As far as I know he never completed the fourth corner and never worked wood again.

Some woodworkers, many if not most, want patterns, plans and templates to help and guide them. Their attitude is totally different. Whereas many freeform pieces are very lovely, creative and expressive, it’s not for everyone and neither will the work suit every environment. I accept that the free-former’s rejection of standardised work patterns brings results of a different kind, there is a place for both. The organised, those who work to lines and patterns, recognise standards and such, feel secure by the fences they build as guidance. Without such things they feel insecure. In the camp of the freeformers, no two pieces are ever alike. That’s what makes their work so totally unique and in many cases wanted in the desirable sense. This element of unrepeatability is the appeal, as is the way it is formed, whether by nature or by hand. 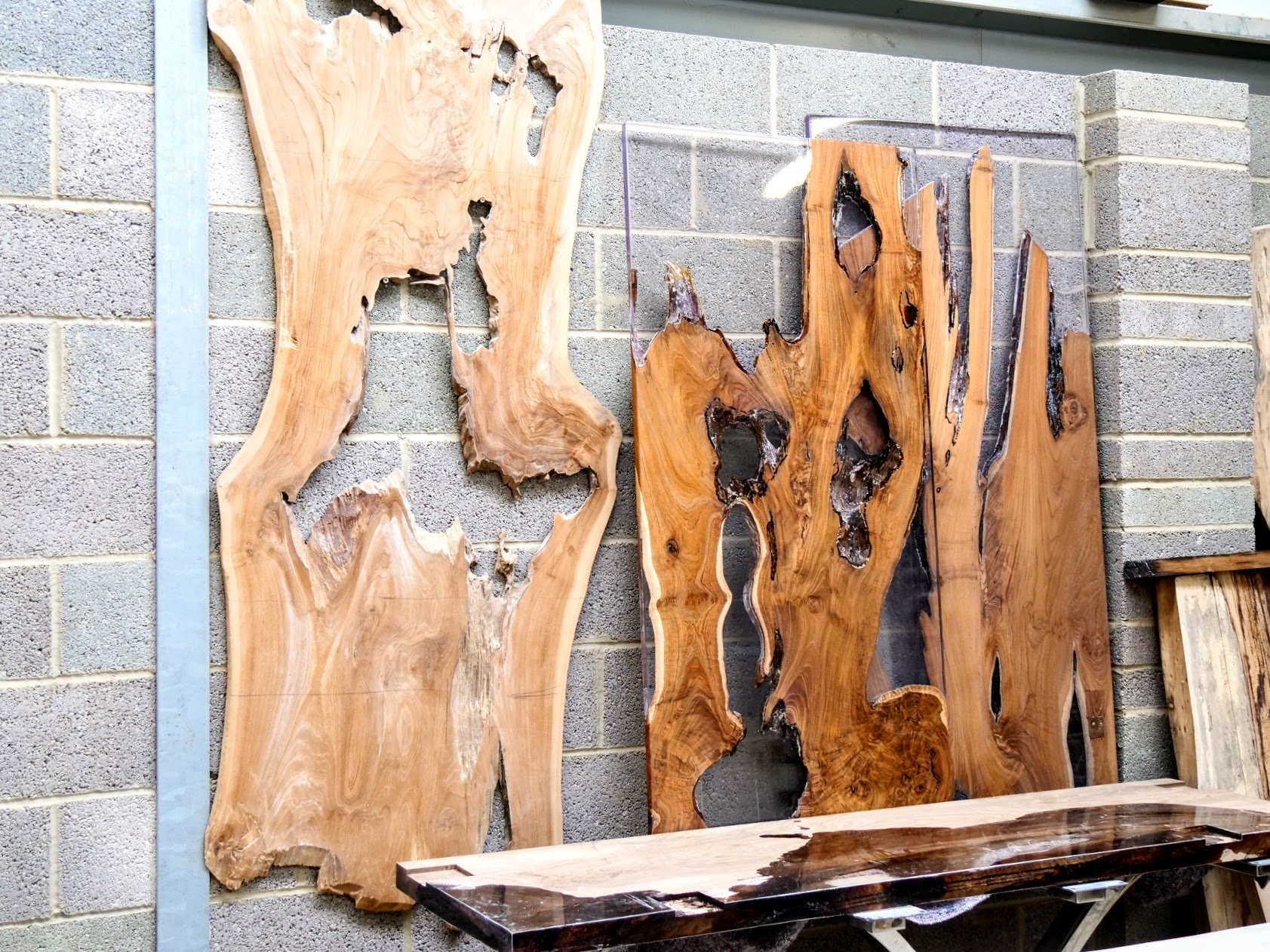 Freeformers, not all of them, create their work mainly for a narrow market; very narrow. But then that suits because proportionally their work is rarer and fits a rarer clientele. I have seen stunning pieces in stark contrast grace homes and offices to create atmospheres some could not live with but non the less they are acceptably creative. Personally I like both, but the home usually needs the creative touch to receive the freeform work. Indeed, some woods simply defy any kind of constraints. I have had some sections for years. What to do? 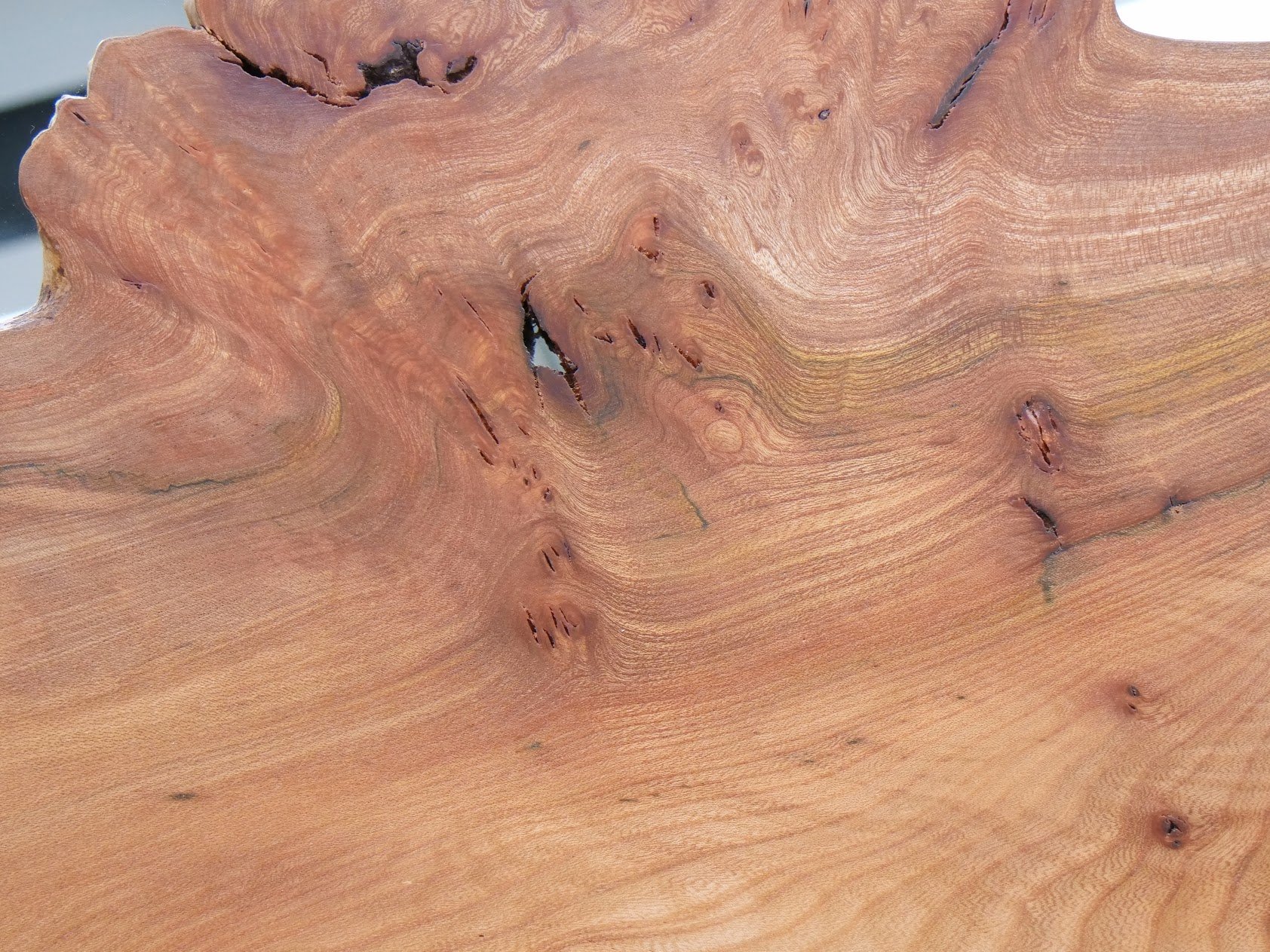 For a long time I accepted that the rule of laying the plane on its side had a valid existence, but, personally, I never really did it in my own life because, well, it wasn’t particularly part of my training. It was in school that we had to perform this practice. It was conforming and conformity. 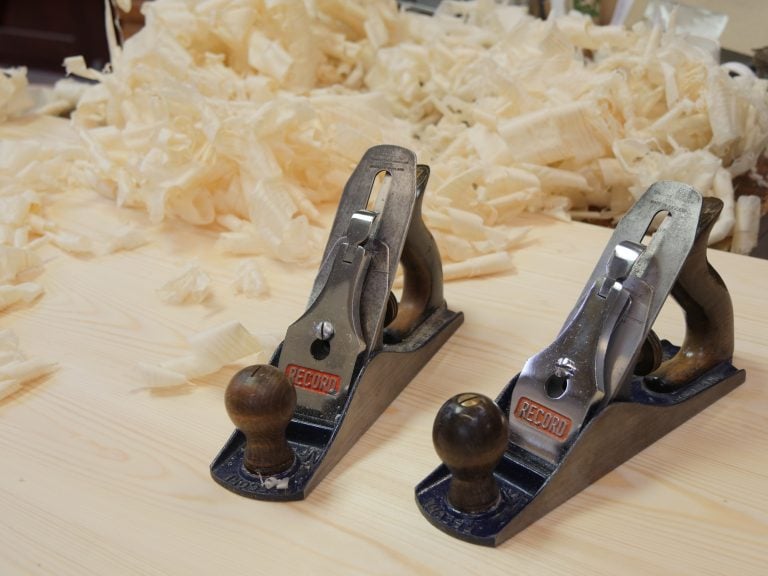 When I became an actual woodworker, learning from men working as woodworkers and who earned their living from woodworking, they always stood their planes upright and ready for action. These same men never gave me a honing guide or told me which angle to grind to. They just set me to on the grindstone and oilstones and let me have at it. There I was sharpening away. 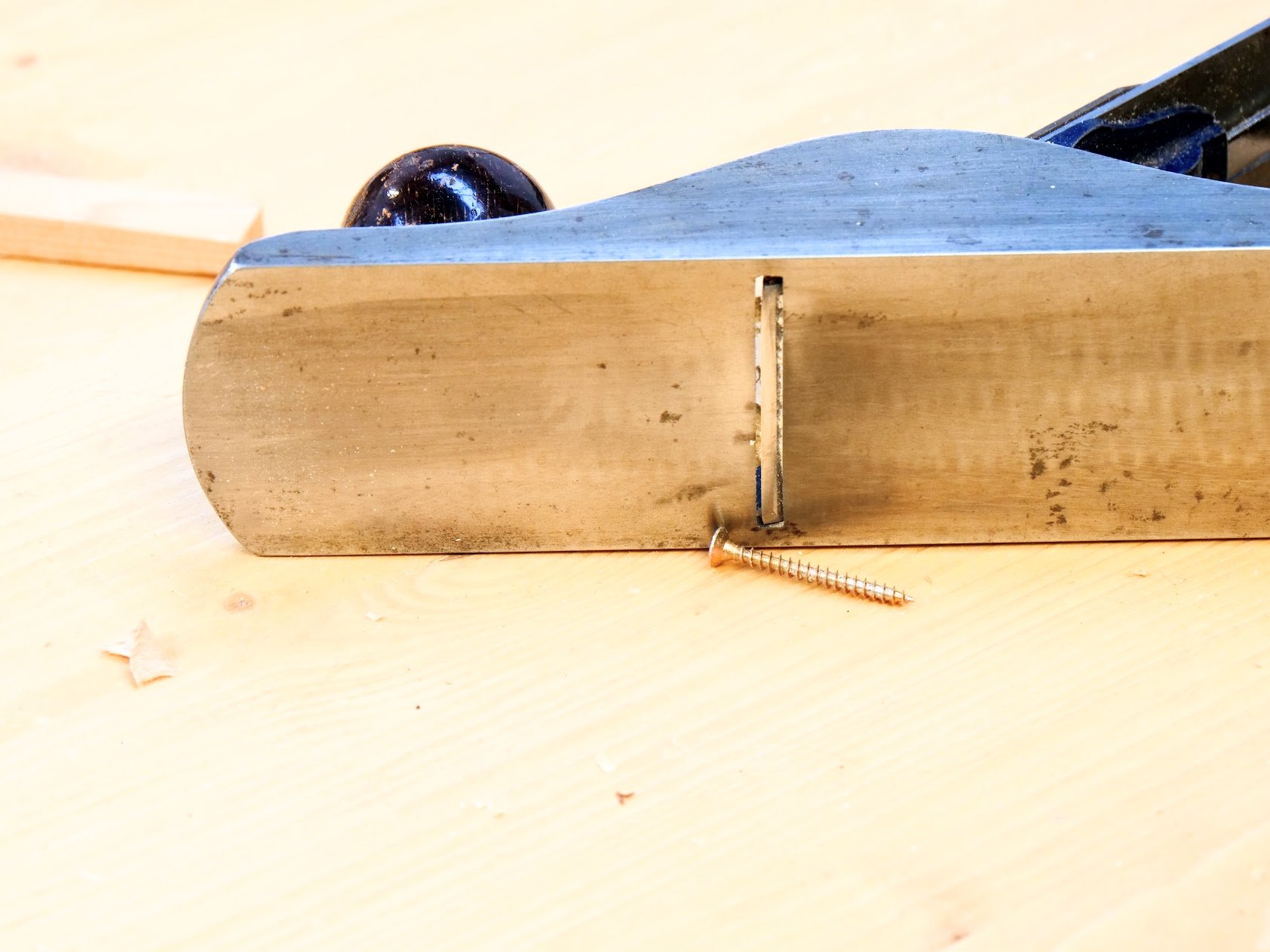 But they gave me a dovetail template even though most of them didn’t need or use one any more. Now it’s true that I no longer need a dovetail template either. I haven’t tried it yet but I think I can cut a hundred 1:7 angles either side of 90 and hit the angle 90 times. Generally I don’t use honing guides, but my spokeshave blade holder for holding spokeshave blades to hone them is a godsend and can be used with or without the honing guide. So why use one? Because I have not met a student yet that got the bevel right on spokeshave blades and none of them had fingers with enough muscle strength to get the cutting edge sharp and well maintained. So, there you have it. There are times for guides and templates and then there are times when you leave them behind. So what brought me here?

On jigs, templates, guides and story boards or story sticks or rods

The question I was asked is what’s the difference between them jigs, guides and story boards. And the problem in defining them is that they are often used interchangeably even though it’s often a bit of laziness on the part of the user or the manufacturer that causes the confusion.

Firstly, the term jig is often a misguided use of the word. On the other hand a template, though often called a guide, is never called a jig. The word template means pattern and is used to guide us in marking lines onto the material we are working. Usually, not always, we use these lines to cut to. My dovetail template mentioned above is also called a dovetail marker though template is the more accurate term because the template doesn’t actually mark. It’s used only to guide the pencil, pen, marker or knife. So we see that a template is something we trace around.

A guide can be one of two things or both. You could describe a marking gauge (any type) as a marking guide because the gauge guides and controls the marking pin. To avoid confusion we call it a gauge. The same can be said of the sliding bevel and the square. A guide generally can be either a reference or a control. A reference might be something like a a protractor where we use it to check an angle. There again it can be something that actually controls the presentation of a tool to the work as in the case of a honing guide where it so controls the presentation of the tool it guarantees the bevel is cut to exactly say 30-degrees. It’s at this point we often see a crossover of terms because now we might justifiably call the honing guide a jig too. I think this works fine though personally I would tend to use the word guide.

Jigs is indeed a more modern term and one used more by our US cousins a d adopted from them in recent decades I think. In recent decades the use of the router has been used to replace hands skills. In fact, almost all machines have been adapted for other tasks by jigging them to perform other tasks for a guaranteed and uniform outcome. With a dado cutters on the arbor of a tablesaw you have an effective tenoner, groove cutter and rebater (rabbeter USA). None of these adaptations of use are jigs, guides or templates. Add a piece of equipment that holds the wood, like a tenoning jig, and you have a jig. In other cases a jig might guide a hand held machine like a router and feed the router via a guide into the wood. This would then be called a dovetail jig, e.g. Leigh Dovetail Jig. So we see that a jig can hold, guide or feed either the wood into the machine cutter or the machine into the wood.

Story boards, rods, poles and such

Sometimes we lay out every aspect of a project full size onto a sheet or stick of wood to guarantee a working example of we are making. The details are accurately laid out and we can then use the sheet or rod to transfer exact positioning for details such as mortise and tenons. Often we do not need full drawings showing front elevations to doors and window frames. Just the overall height of the frame and then the rails in relation to the stiles. Once laid out, the tape measure is used mostly to cross reference the work as all future measurements are directly transferred from the rod or board to the workpiece.