Yup! a couple of newspaper writers (maybe more, knowing British journalism) reported the same thing in a short space of time, both hailing IKEA as a ‘democratising’ force revolutionising people’s perspectives on furniture design. Both articles were interesting in the way some articles can be, you know, contributing interesting points of view sometimes but not much to societal needs as such really. They are time filling on a lazy Sunday and that may be purpose enough. What actually struck me most between their somewhat opposing points of views was the unifying thread in their use of the terms “democratisation of design” and “democratising design and the theme of creating affordable, non-fusty furniture for the masses.” As far as I have seen through the years is it is not so much IKEAS ability to design and democratise but more their ability to produce zero- or minimalist-design products that seem less to be concepts of style, shape or form but mostly the selling of square-edged, styleless, plank-type items in the form of very, very plain boxes. Yes, I do understand the needs of young families for low cost storage and first year students to furnish their rooms, but democratisers of design???!!!

Unpretentious though their lines are, you can hardly say they are designs so much as meagre assemblies and of course assemblies you generally have to take care in the way they are used because the selling points are their lightweight cheapness, transportability, dismantle-ability and simple (or complex) self-assembly products. You might be better to strike out into similar fashion statements rejecting the classics of old and adopt an equally classless line of unimagination by using old scaffold planks for dining tables and benches or, say, a shipping pallet coffee table on commercial galvanised swivel casters. I never liked lazy, press-release type journalism (as we are used to in British woodworking magazines) because it can be the same as lazy design work; both lacking any true imagination. But the two authors, each celebrating IKEA’s birth for opposite and then too the same reasons, seemed more focussed on this issue of IKEA somehow ‘democratising’ something rather than considering what could be in essence more a diktat. I question whether IKEA makes products that people actually want or makes people want what they make by virtue of cheapness and driving out competition, but then what do I know? I know this though, IKEA only sells what it wants you to buy, sells stuff so cheap that no one else can compete, and devalues the market by forcing down prices to a level that promotes mainly quite dumbed down designs. I don’t ever recall much in IKEA’s selling centres that I would describe as at all imaginative. People buy there because it’s cheap. To zone in on the reporting world, on Beeb 4 a day later a reporter interviewed some head of IKEA UK and allowed way too much waffling claptrap boasting IKEA’s products were now no longer going into the landfill after a short lifespan, as the reporter suggested, which is of course absolutely true, but onto the secondhand market, which IKEA wants to include in its ‘widening circle of circulation’.

Oh, just a mention, India Knight stated that she had reupholstered her IKEA sofa “umpteen times” in 20 years since she bought it. Wow! I never knew anyone that reupholstered their furniture more than once let alone over and over.

In reality IKEA design, non existent though it is, is not to tackle design concepts but to provide the seemingly endless need for good storage space and personally I do give IKEA credit for coming up with some nifty concepts even though they mostly date back through centuries of industrial evolution, mostly being advantaged by the developments of plastics and plastic and metal versions. Take a close look at IKEA’s units and you should readily see that shelf units and cabinets are basic coloured boxes in metal and particle board. Within such units they provide fabric covered cardboard totes as containers for the family paraphernalia. You know, the stuff of drawer filling. They have very few drawer units for sale. Why? Because there is twice as much material hidden on the inside than you can see on the outer case. They’re too expensive even for IKEA. 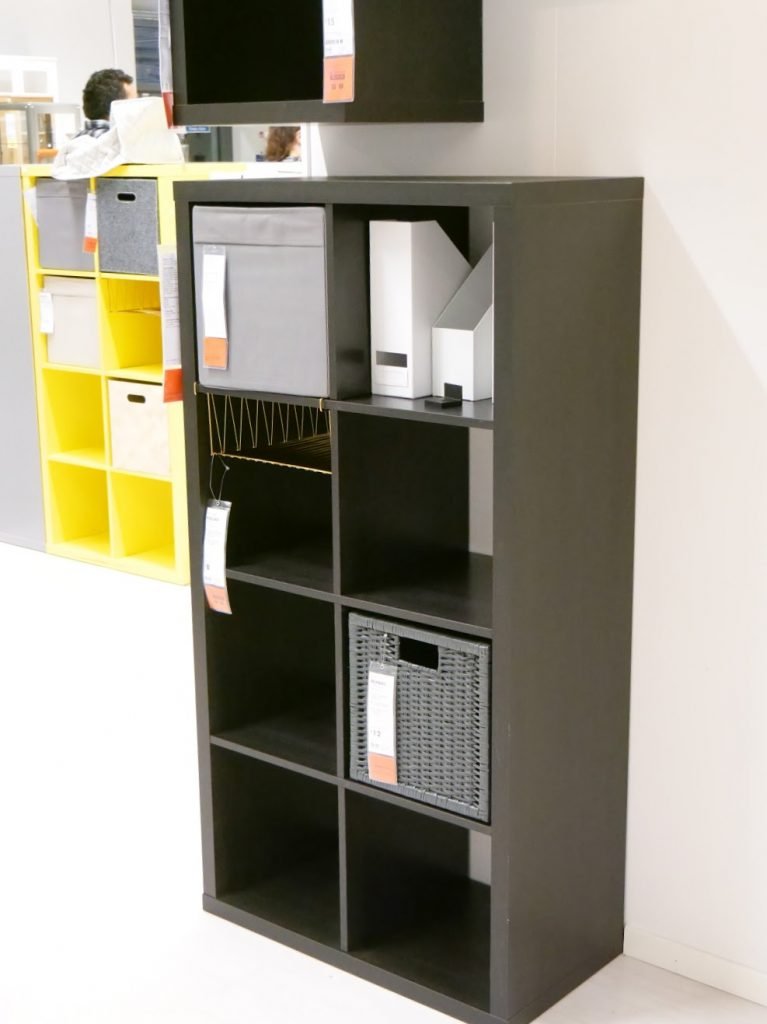 IKEA basically bridges the gap between those who can afford more high-end pieces and those who could never afford such quality. It sells baskets and containers and alongside large amounts of disposable stuff, items not designed to absorb the pounding of a young family and that includes its furniture most of which is designed to sell but not last. By virtue of putting competition out of business it then builds in planned obsolescence into it’s own products and that is why most products they make or have made for them last only a few years, months and in some cases just weeks.

On the one hand Rhiannon Cosslett article in the Guardian describes IKEA accurately as the “symbol of impermanence”, but she also follows the same track as India Knight in stating that this IKEA is enabling people to shed their ties with “snobbery regarding middle-class home decoration”.The woman reporting in the Times, India Knight, describes the pretension of owning a semi (duplex, USA) and adding furniture that emulates the chintz (a word used in the two articles) of the rich and famed owners living in UK mansions past as a kind of mindless hypocrisy. I agree to some degree, but then there are those millions of others who follow the IKEA trending in equally mindless ways buying into its philosophies purely on the basis that it’s IKEA, as though IKEA holds the keys to concepts of good design. This, in my mind at least, shows how lacking we can become in discerning just what a good design is.I might liken IKEA designs to all the nations County Councils use of standardised street and buildings signage. Yes, they work effectively, but only because they have a created dull and unimaginative examples that stand out because of dullness. The main difference here of course is that for safety reasons the County Councils have a get-out clause.

I have yet to walk through an IKEA store without thinking (smelling too) MDF, pressed fibreboard, resins and plastic but how is it even possible that any company could put so much effort into creating so much artificiality.

I’m afraid that, of these two writers, India Knight fared the worse in that she did indeed fail to see the irony in her extolling IKEA as the great liberator of past pretence and the democratiser of taste when all that IKEA produces is indeed totally faked and in that pretentious in that everything it sells that looks remotely like wood (though cleverly done) only pretends to be actual wood at all. What IKEA makes does not last because it cannot last. Additionally, when I am in IKEA, I automatically think cheap, robots, automation, throwaway, and why on earth would anyone buy this unsustainable, irreparable, earth-costing, democratised j***k? I have yet to find something, anything, where I say to myself ‘Oh, now that is nice.’ and then too, ‘I would like that in my home or office or workplace.’ If we do finally give up and start extolling the virtue of IKEA as a great designer and conceptualiser of well designed goods and especially democratised furniture, my personal area of expertise, rather than the fabricator of low grade throw-it-in-the-landfill stuff, we are in danger of seriously misconstruing what’s actually taking place.

I will be glad when we finally see that IKEA is little or even nothing more than a producer of low-grade, poor quality boxes in many diverse materials the least of which will be wood itself. And that these simply stack crate-like as shelves to put the world’s ever increasing excesses of stuff on or into. It meets the needs we feel we have as working people without disposable income and who cannot afford to pay any more into this false economy of manufacturing offered by IKEA (and many others like it). My suggestion? DIY! Go ahead, pick up some cardboard boxes, paint them, cover them with fabric, and save up for better. Better still, start making your own.