Thonet Chair Designs—What They Brought to the Table 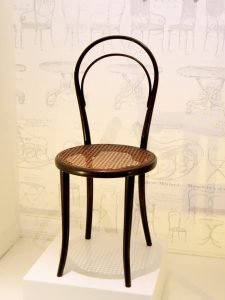 Michael Thonet chairs have on the one hand remained unchanged for almost two centuries and then enjoyed variations on the theme for decorative accentuation and individualising a design under Thonet’s concept. Working at my workbench I slipped into his entrepreneurial designer shoes as I embraced his commitment to changing the face of chair making because he had an idea and bull-doggedly went against the flow. In an age of design excellence at every level, joinery too would add the accent of support structure to undergird longevity in an age when longevity mattered to the investor in their furnishings despite fashion. That was the 1800s. Thonet came up with jointless pieces that to many might well have cast him as more a renegade, but the outcome of decades of work gave us the Thonet mastery of design. What actually made his work ultimately possible though was something we now take for granted. Although the wood screw had been in existence for over a hundred years, it was the invention of more specialised screw-making machine that led to mass production of wood screws in the early to mid 1800s. Prior to that period, wood screws were cut, chiseled and filed by hand. In Thonet’s day it was indeed the invention that he could use to unite his parts together. Whether you like fixings like wood screws or not it’s of no matter. You can’t stop progress and the chair proved Thonet was a man who had all the elements of an adventuring entrepreneur—Who could fault him for his innovation?

I am certain Thonet’s peers laughed at him, even perhaps ridiculed him from within the peers of his trade. It takes grit to go against the grain of opinion but his bent was to take half a dozen 30mm rods of turned and shaped beech-in-the-round and bend them steaming hot in a twisting action from the steam chamber. Careful and steady aligning into conformation with the specially shaped former that gave it the ‘Thonet‘ styling and shape. Thonet did as most skilled designers of chairs did and took his chair’s development through to a finished work of art with developed safety features built in. With that thought in mind, safety became an essential element to the chair’s sturdy solidity. It was his chair, his name mattered and if the chair did not meet good standards all round it would ultimately reflect on him and his family name.

Failure in any new design can result in a downfall. To prove how good the chair design was to him, his inbuilt safety features in the 1840s still feature identically in the chairs Thonet make today. Nothings changed because the chair safety features were well thought through and complete.

A chair with ‘kick’

Good chairs have a wider base than the apex. It stands to reason when you think that people often tip back, lean sideways and scoot forwards to seat, rise and move the chair for dining, working and office work. Unlike the Shaker chairs of America influencing the same era of design stateside in the USA, Thonet brought a safer and in my view a more comfortable chair to the table in a variety of ways. I mention the Shakers because many of their chair lines had the centre of gravity too far forward and when used by children the chairs often tipped backwards and crashed to the floor.

The Thonet ‘kick‘ resulting from steam bends in the wood to form an ‘ankle’ meant that each leg foot pushed the lower extremes of the legs out diagonally from the centre-point to thereby increase the base extreme considerably more than the surface area of the seat. This extension made the chair virtually untippable when even lightweights were seated or worse still kneeling into the back of the chair. This was indeed an essential element of the design because of the chair’s lightweightness, compact smallness and frame construction type.

Remember that dining chairs are as much a working chair as say an office chair. Whereas in our era office chairs are four- and five-wheeled versions emanating from a star-pointed central hub, chairs of the past stood mostly on just four points. In times past chairs used for dining were also used as working chairs be that for preparing vegetables or writing letter, weaving baskets or sewing cloths and knitting. Household tasks worked in tandem with cottage craft work too so chairs moved from the kitchen table to the dining room and out to the front porch for weaving baskets or making leather goods. Think less decorative and more functionality. This would be especially so in the pioneering of the New World where craftwork was perpetuated in the birth of new frontiers, population travellers searching out new realms and so on.

A Radical Shift from Jointed Chairs

A key element separating Thonet’s chairs from the more conventional chair types is indeed his departation from the more accepted traditional joinery used throughout chair making. Whereas bored holes to receive the rounded ends of rails, spindles and legs are often referred to as mortise and tenons, technically this is incorrect. But nomenclature aside, it does describe the male and female components uniting the different chair parts three-dimensionally to the central hub of the seat. but of course this is not correct at all. Looking for joinery in the original Thonet chair here may well leave you feeling disappointed because, as you can see, the front legs are mere stubs of tenons doing nothing more than to fit into parallel holes of equal diameter in the hooped seat rim. All other seat components rely on little more than six screws. 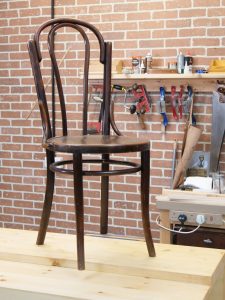 I bought this Thonet-style chair from a charity shop and paid £25 for it. It’s a 1950s version but it follows several elements of Thonet. The seat rim is widened to receive the leg tenons of the front legs as was the original Thonet. Three screws secured the added pieces to the rim with one of the screws passing into the top of the front legs. The lower hoop adds to the stability of the chair and was a simple addition effectively creating the bracing one might get from a wide rail apron in traditionally jointed chairs. Adding corner bracing strengthens the chair phenomenally. This is because when you bend straight wood it retains the intrinsic strength value afforded by any continuous grain.

We should not lose sight of the value of continuous grain and of course this has been the advantage in the development of a wide range of chairs over the past 300 years at least. Steam aids the bending of course, but moreover it allows us to change the restraining values of the lignin in its binding of the cell walls of the wood to allow changes we make in reshaping. This then gives us the ability to reshape the wood and preserve the intrinsic value of continuous grain together with its strength and rigidity. 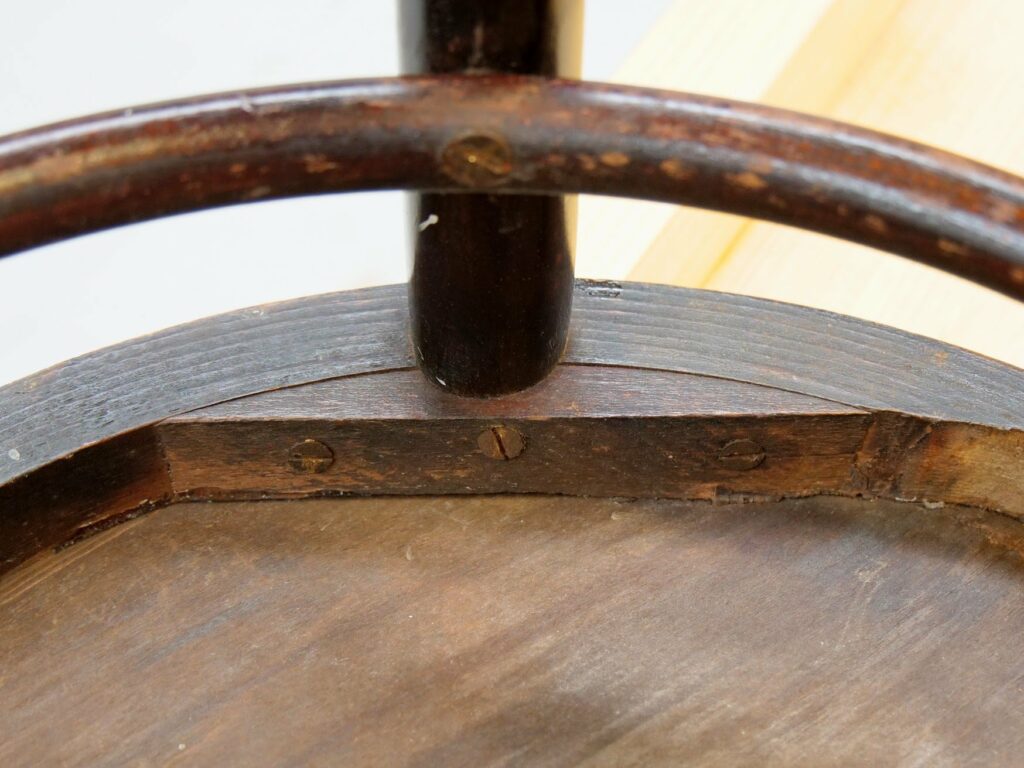 Screws and screwed construction were in no way eschewed and I liked that. In the picture above you can see the widening of the hooped rim to the chair seat to receive the leg ‘tenon’. Screws and hide glue united the expander to the rim and the middle screw passed through the so-called tenon to keep the leg in place. The lower hoop was merely screwed in place and was not glued to the legs. Often I hear purists who often want to disallow the use of mechanical fastenings like coach bolts and screws but I have never rally felt that ways at all. In my chair the maker used 24 screws. The Thonet used 16. The screw heads were concealed by wooden plugs, levelled and stained in the staining of the chair.

The kick on the front feet is 63mm (2 1/2″) so with the front and back kicks the base front to back is 5″ wider than the seat is from front to back. with the same difference to the side extensions too.