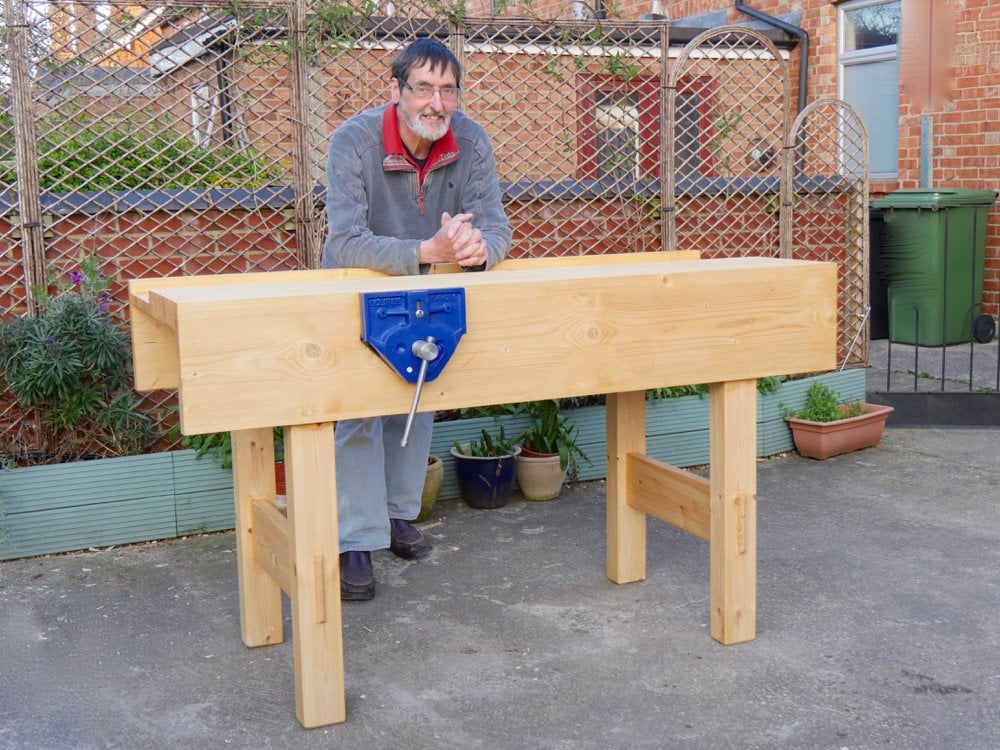 I’m never too sure when it comes to talking about my work where making is replaced by teaching—every time I make I end up thinking about whether what I take for granted in my everyday work has additional value to those relying on keyboard dexterity synchronised with head knowledge. My world of designing, making and teaching usually leads to a sort of seamless crossover these days. Whereas I saw my ways of working wood as more ordinary working, I also thought that everyone working with wood did it the same way, but then I saw that that wasn’t really the case. People had mostly strayed away from it. Whereas I grew up cutting the head off a nail to become a perfectly-sized drill bit, the circle of men and women around me were mainly using air-nailers. My method wasn’t common or at all necessary in today’s woodworking any more. Or was it? It was when I saw that air-nailers had become common that I reintroduced the nail-cum-drill-bit  to our post-modern world. My using it to make a picture frame series meant that people saw a different power woodworking. My now older-world woodworking began to change the face of woodworking over a number of decades and in the most positive of powerful ways. People felt safer, more in control yet without losing practical control values. It was non-invasive and so very all inclusive too. Add in the fact that it was also highly affordable for just about anyone, we found ourselves pushing new boundaries and forging ahead to combine the best of the past with the present and new. Because of this I pushed into it and the numbers have just kept growing. 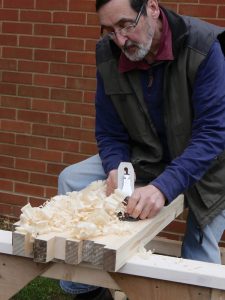 In the last 18 months I’ve made three workbenches but two of them I made entirely outside my home garage, so that I could totally feel what you would go through with limited resources and constrained accommodation. A concrete driveway, rainy days, cold, high winds and so on extended the time it took, but I wanted the authentic photography without my staging anything. I also wanted an example or two to show what the outcome was. So, anyway, I say all of that because setting up trestles in my driveway seems so very far away from the fully equipped workshops and machine shops I have known all the way through my 50 years plus of woodworking. It’s at this point that I might say even if you have got the machine shop and high grade equipment, there is something about, well,  shall we say ‘roughing it a bit’ that makes the experience truly experiential, adventuresome, if you will. You see that’s what I want for you. Behind my garage doors stood my bandsaw, tablesaw, planer and jointer and chop-saw. Oh, and my mortise machine too. I didn’t use them to mill my components on as I made either of the benches nor the current series workbench. Why? Isn’t that a bit ridiculous? Aren’t you taking it a bit too far, Paul? Well, when I first arrived stateside in 1987 I asked my landlord if I could make a workbench on the den floor of the house we were renting. Sure you can!  Go ahead! My two eldest boys  were right there with me, little though they were. They helped me spin and twist the lumber around as I chopped mortises and cut tenons on the den floor. Had I had machines they could not have been on the job there with me. A cotton drop sheet kept the shavings and sawdust from entering the carpet fibres and after a few days my new, made-in-the-USA workbench was ready for action. 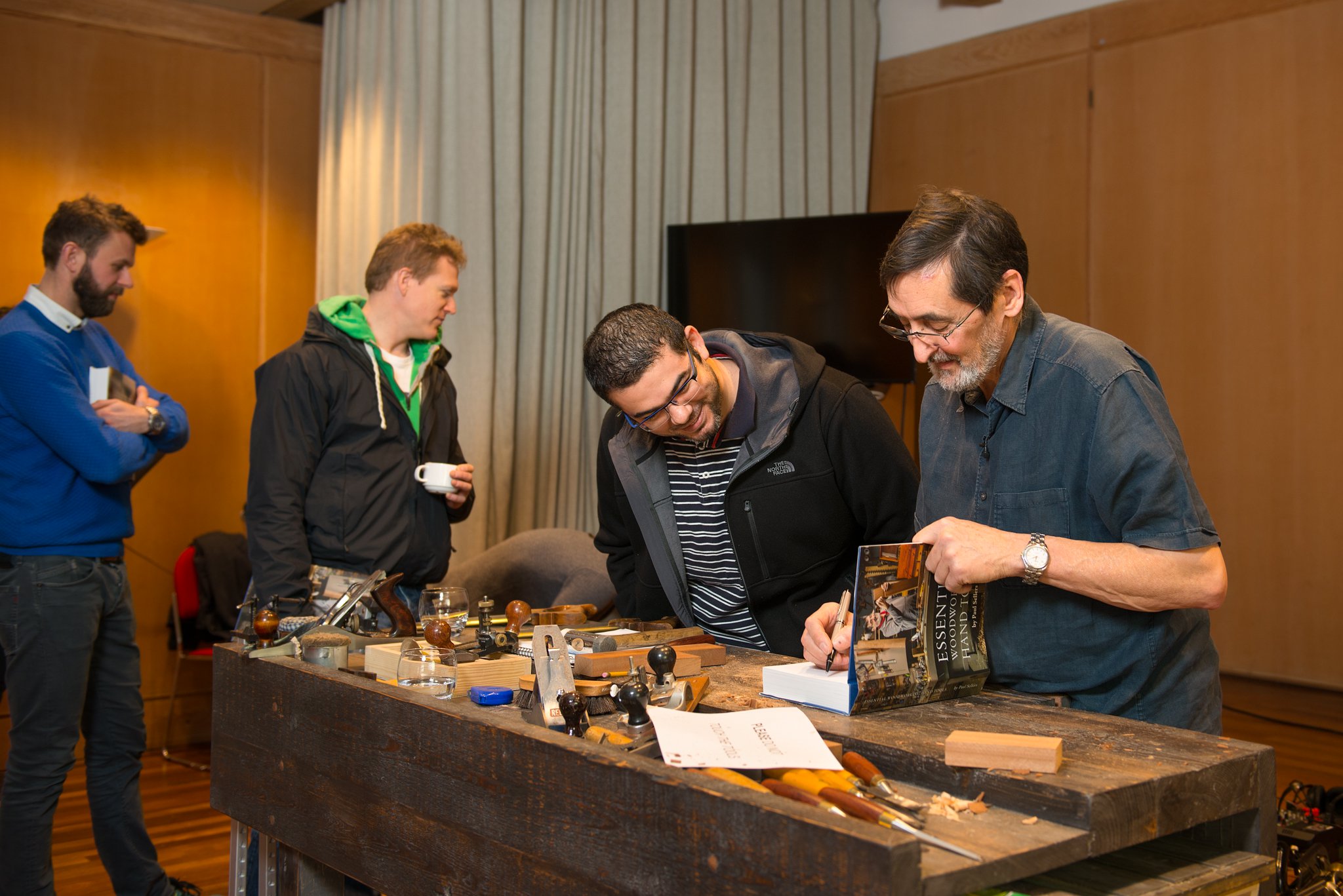 The workbench becomes the magnet for others to share experiences around. This was when I a seminar in Oxford and signed my new book Essential Woodworking Hand Tools for everyone. 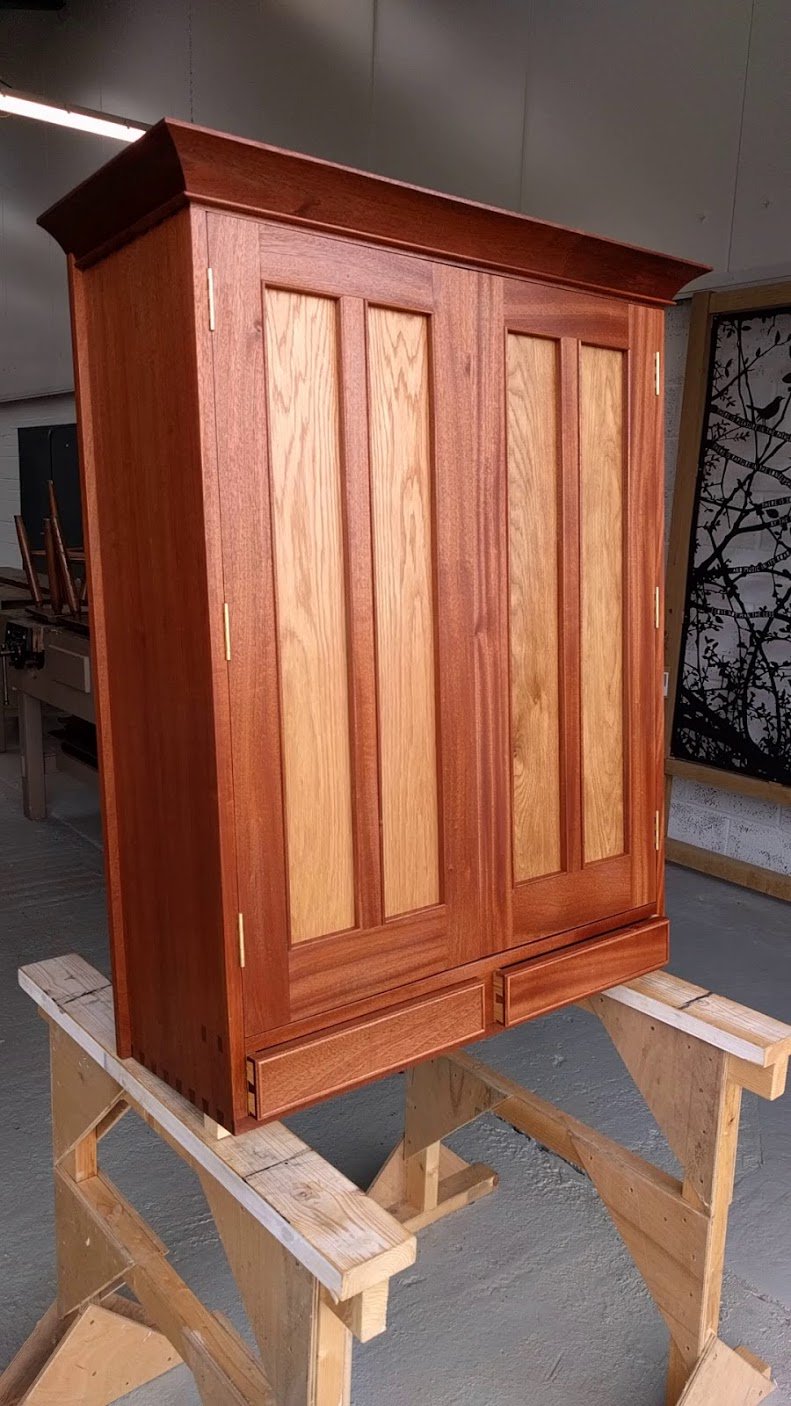