Social media to some is a bit like Marmite, you either love it or you hate it. Thos who like Marmite usually have it on toast and turn to it every morning to start their day. It can be the same with Facebook and YouTube. I like it for one or two reasons but the main one is that it’s through social media that I can let so many people searching for real woodworking know about our work. I thought this years happenings would be of interest to you because I know that you too care about the community we’ve become. Let’s take a look at our YouTube channel first. Some of you will know that we recently passed the 225,000 mark. Not bad considering that was never in our psyche when we first started presenting for YT.

Last year moved so fast and we achieved so much but I thought you might like to see some of the surprising highlights flagged up by numbers. Well, at least they surprised me as they would Mr Fibonacci I’m sure. I wonder what he would feel at my taking a few seconds to create a three-dimensional example of his mathematical formula. It did go pretty wild when we put up just the old photograph on my Facebook but when we filmed it! Whoah!

I wanted to show people who might need a spokeshave that they didn’t have to spend much of anything but a little time to make a spokeshave that worked. They took that as a trainer and then went on to make a really good one from some basic scraps. My Real Woodworking Campaign in action.

And currently I was amazed that my new how-to on building a great workbench suddenly reached people around the globe and how many started building it straightaway.

Most looked at on my blog were the following blogs.

How to Build a Workbench – Drawings and Measurments (part7)

How to Build a Workbench – Intro and Laminating the Tops (part1)

How to apply shellac as practical wood finish

I tell you, I am surprised because other posts took a lot more effort and energy pulling together, but it shows what people are looking for.

How to build a workbench part 7. This is the one with the drawings and measurements. We have replaced this series with a new one currently being released because the old one was too big for 95% of my audience. that said, people found it entertaining to see me in my garden making a workbench. Part 1 was popular and the reason is it broke through the barriers people faced with buying masses of hardwood at top prices. We made it affordable, doable and more important all inclusive. This new series though is so top notch. I appreciate what we achieved initially but crafting good film is like crafting a piece of fine furniture. It’s the small details that make the biggest impact.

Applying any wood finish is often very intimidating because you can have hours, weeks and even months in a project. I thought that this video took away some of the fears and would help people to realise that with the right steps they could get started. It worked.

Well here was a turn-up. It was the videos again that struck the high note with most people. The Inlaying Geometric Shapes followed by Fibonacci spiral video followed by Laying Your Plane on its Side. Who would have thought it.

It’s not complicated, but the outcome results in a celebration of lovely gifts to share with family and friends.
I think this might just amaze you. DIY!!!

Fibonacci spirals occur throughout nature, but I thought you would like to share my experience when I sharpen an edge, work my wood and share it with a gifted filmmaker. #woodworking

Sometimes reasons from the past had validity for the generations that they were in but then were carried over into future generations for which they became invalid. Here is a video to bring into question once more why people, almost all woodworkers, lay there their planes on their sides when it’s more a bad habit than a good one.

Instagram also liked videos. Hannah flipping her workbench over safely was great and then my gouging Google with a couple of gouges in a few seconds seem to draw intrigue. Hannah’s levelling of her workbench top caught the imagination and I think this was helpful for those watching. 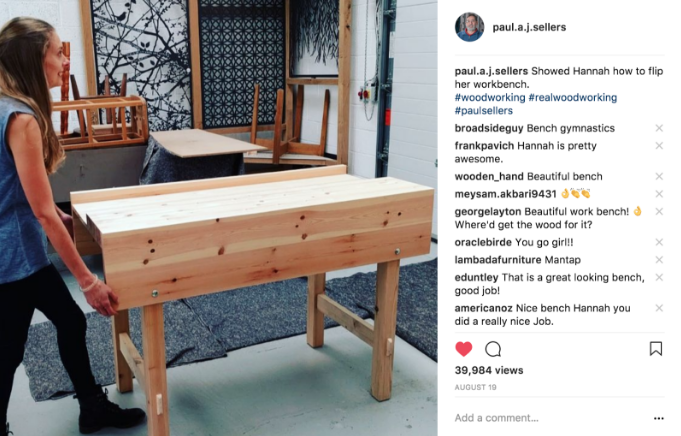 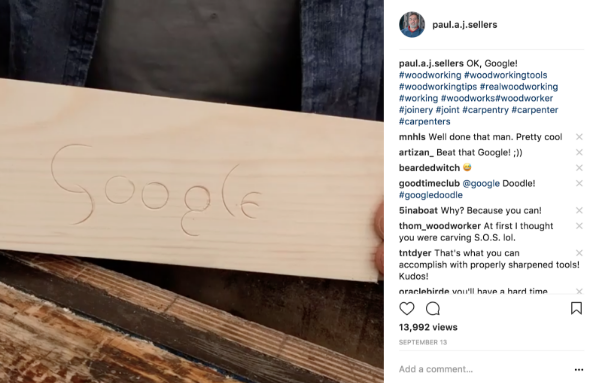 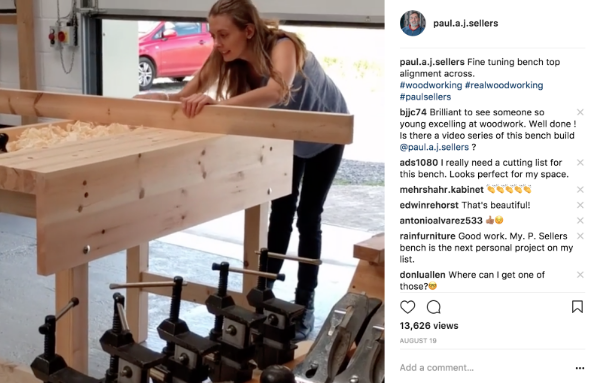 So there you have it, just a few 2017 events that grabbed my attention.