The evolution of hand tools in my personal work life fascinated me only in the development of metal being mated to wood in the making of tools. Finding my first genuine Indian arrowhead lost in the wildness of the Texas Hill Country made me aware that the arrowhead wasn’t lost but left in place where it belonged. It was then owned only by its environment, the place from which it was hewn, chip-shaped and very skilfully and finely crafted. The spot where I was may have had only a hundred cowboys pass through it since the west was won because where I was was indeed remote. Whereas my find interested me well enough, even a stone axe head too, it wasn’t so much fascinating to me but more generally interesting. Picking them up, flipping them, I left them in the place I found them and moved on. A native American indian taught me to do this and leave their belonging in place. So my interests lay in the evolution of the tools I personally grew up with and worked with. The metal ores that became the finely made tools I worked from my own culture of England.

The tang union to a boxwood chisel handle relying solely on an identical opposite of the four-sided taper just created dynamism for me. The two parts became one in the hand and this perfected correspondence is what somehow always fascinated me. By correspondence I mean in the true sense of it where the co responding of the two elements came together and especially was this so when they were two exact opposites. The existential development and the recording of such resounded in the lives of crafting artisans; men taking thought to shape and fashion their interdependency on the natural and creating the tools to shape the material into usable, functional tools.

What I love the most is the way they developed the designs to their pinnacle levels of engineering by both machine precision and then also the drawing out of steel by hammer blows and the eye of a blacksmith. Hard to imagine that this perfecting of design took its shaping refinements in the late 1700s through the late 1800s. Few tools made today, despite the discovery and engineering of new materials, equal the quality of design and beauty of that period despite so-called technological advancements. The reason? Simple enough! Men engaged their hearts, minds and dextrous hands more to this perfecting of shape from beginning to end. The thinness of the bevel-edged chisel, its beautiful taper, it’s hand wrought, blacksmithed tang. And then the saw handles of tenon saws too. These men were crafting artisans defining and perfecting shape. 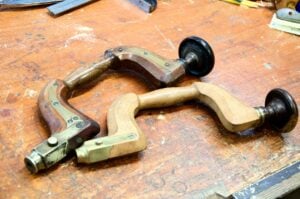 The ultimatum brace made from ebony and rosewood knows no equal in beauty. Even plain beech is still lovely. I love that the moving parts are hand wrought races or hardened metal to hardened metal. Not complicated, just wear resistant.

My archiving is not dead work but ongoing life. My ambition to reverse the trend of dumbing down craft to mere systems of machine processing and yet circumnavigate using the term pastime in its most negative sense has taken a great deal of work. Whereas many will always use the term hobby, it is perhaps more my ambition to redefine the word, if only in people’s minds and perceptions. Primarily it’s because it never carries the full measure of value in that most hobbiest woodworkers are or aspire to be highly skilled but are rarely ever recognised as such. Whereas hobby woodworkers have raised the bar, professionals have been seen to lower theirs. Not all, just a percentage. Most of the people that follow my efforts strive for that which demands these high levels of intellectual and visual acuity. They want sharpness and keenness of thought, vision, accuracy and a course they can follow to develop their experiential mastery: in essence, the reestablishment of craft as a core element essential to their wellbeing. Instead of it being an add-on like an app or some kind of bolt-on, they want it integrated in the adoption of goodness. This philosophy is nothing to do with earning a living but living to earn what they value all the more as they develop. 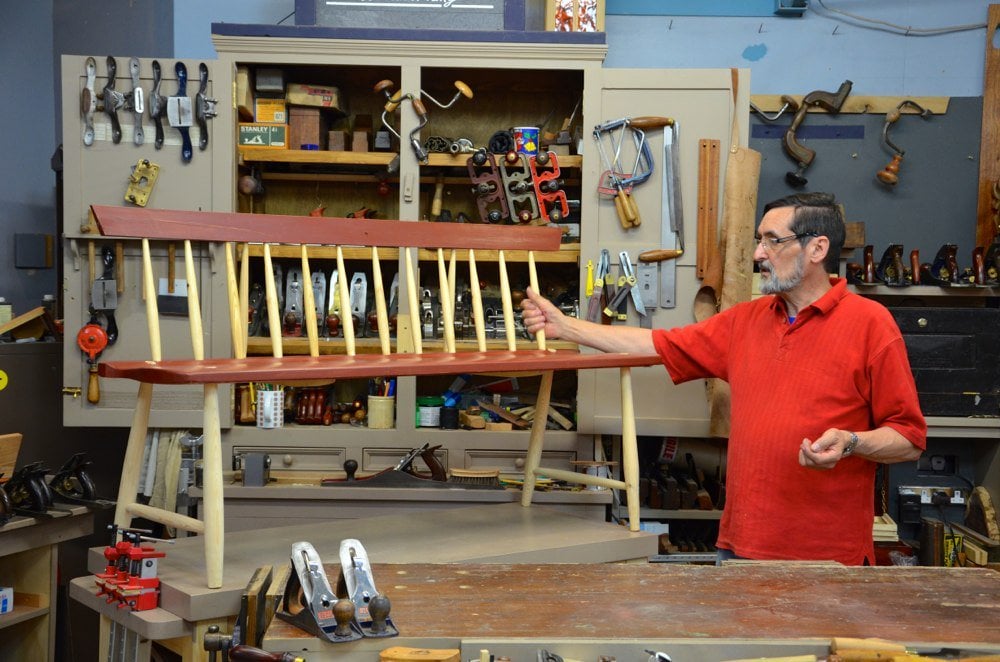 My surrounding of tools and wood, things I’ve made and workbenches would be quite dead if it were not for the people I value. I may all the more still love the tools and the wood, they are really the medium through which I connect with others where I move, but seeing the link between the material and the humanity is pivotal for me. For me it is a marvellous thing in the ordinariness of the ordinary. On the other hand there’s is nothing ordinary about it at all because without all of this I might never connect with those that I do. This culture of woodworking then becomes for me the ‘extraordinary’, both for me and others too, but only if they and I stop to take stock of what’s in place. To undervalue it is to trample it into the excess of non concern, down there with the abandoned tools in the dirt. 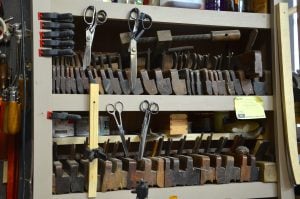 Owning my tools, pulling them down to task them to my work, taking good care of them and not in any way abusing them by brutish carelessness into my working, is to always discover their nuances and quirks. This one baulks in certain tasks while the other seems always compliant, never argues no answers back but still gutsy. I like both because often the awkward one suddenly tackles the work with a forthrightness the other has never known. They are all well worn these days, even the newer ones from my youth in the 1960s. It’s the wornness that that qualifies them, that makes them mine, but then, additionally, mostly, it’s the accomplishments I have achieved by my flexing them into, through and over my wood. 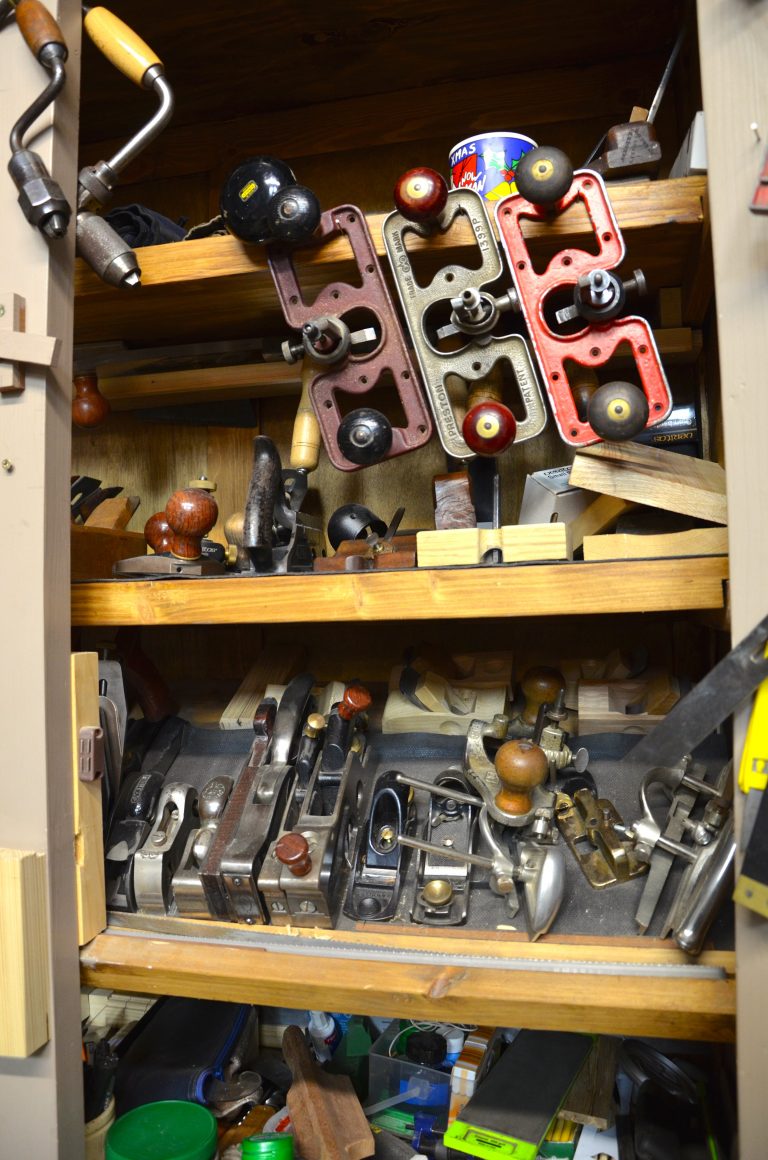 Each day I discover alternative uses for them and by this I mean I adapt them to tasks they were never designed or made for. A saw claims a rebate (rabbet USA) and a router perfects the tenon cheek. Stars black and white are chisel-cut and inlaid with nothing more than a knife, a saw and a chisel. It’s fascinating to see the ordinary create the extraordinary things first shaped in the mind and then by the hand and the effort of a few muscles. The mind is formed by volutes in the brain—troughs and valleys diverting the chemistry held in reserve in the brain for us to create by. Here we access the impulses and the synapses to retrieve from our store of recreativity. The brains creative sphere metamorphosizes the yet unmade raw into a unique substance of mentally unseen into the physical production of made-creativity in the round, as it were.

We’ve travelled from thought and mental pattern to the made item using what was once only the genesis of mental acuity into the working of the tools developed and made for creating transformation. My tools, some made and designed by me and most not, are an extension of who I have become. I identify with and am identified by them. They are my identity as a particular type of craftsman. They speak of me and say who I am. Dismantling this, even temporarily, can be disturbing. It is also very thought provoking. Is it truly the mass of tools that identify me or, as is my intention to show and prove, is it my skilled use of and my reliance on them that identifies me? Personally I am discovering anew, having removed the excesses to another place away from sight, what I always really knew to be so. It’s that which I knew from my most early days of teaching woodworking to others and the reason I wrote my Essential Woodworking Hand Tools book about the specifics of which tools are essential for hand tool enthusiasts. With three joints and around ten hand tools you can make almost anything from wood. The tool list expands to around the low 30s in number when you include sharpening equipment and such, but for the actual execution of work its more amazing when you see just how few tools you need for the execution of a massive range of woodworking tasks rather than the mass.

Often enough someone challenges me with an advocacy toward over-engineering workbenches and then to mass-up the constituent parts to increase denseness and weight. I don’t at all feel that people shouldn’t have any weight or style of workbench they want, but I have worked through this for myself and feel sure by now that I better understand and recognise that my decisions are based on the experience I have gained by way of its evolutionary processes I went through to get here. I’m sure that no one really expects me to dismiss five decades of woodworking that determined and defined my thinking this through, but then I am not so sure. Of course I do feel that I am always open to new ideas should they come along, but I have discovered very little that’s actually new and very little that defies the simplicity I strive to retain. In all of this I have discovered and am discovering all the more the reality that less is indeed more likely than not to be more! 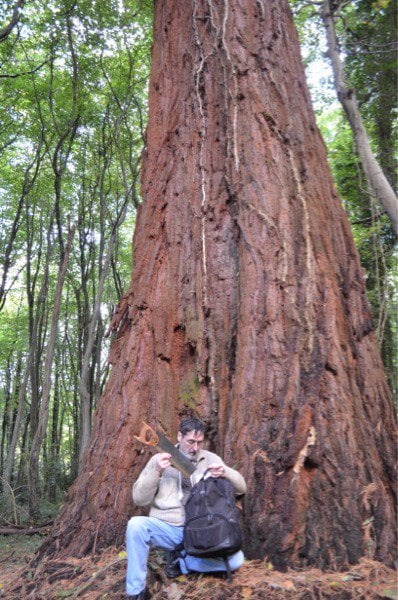 So, for me at least, it”s not the massiveness of workbench legs and extra thick tops designed to make workbenches too heavy to move without lifting tackle that in any way makes for good benches. People who write of such things are mostly just enjoying first the challenge and then the admiring comments people might make. I suspect also that they might also enjoy the extra space needed for the mass of it which most people will never have. So once again, distilling down the excess and ending up with less as more works best for me and then for the majority too. I would probably never admire a big bench. I liked the evolving of my workbench to today’s version and now I am enjoying the evolution of diminishing levels of tools too. It’s become manageable to me and inclusive to all. This I can say with all honesty and trueness to myself and my own integrity. Don’t pursue the illusion of mass in any form but the simplicity of the making more with much, much less. Always remember that less is more. Where I’ve ended up is with a certain punchiness I enjoy where I can now punch above my weight!