When I first arrived to live stateside as a migrant in the USA, people seemed highly respectful toward craft and a crafting background. Having apprenticed through a bona fide indentured apprenticeship in woodworking, I was often invited to speak at different engagements and it soon made me feel quite settled. I was surprised by the respect woodworkers had, it bordered on reverence. It had never been that way in England at all. Manual crafts in the 80s, no matter how skilled the artisan, or the fact that I had always worked hard in my trade exams, manual work was nothing more than digging ditches or stacking supermarket shelves. Now that we have lost the levels of craftsmanship once common in my country, it seems we might be gaining a little respect. In the USA it was never like that for me. In the USA I found myself relaxing into acceptance. I never had to prove myself to anyone again. 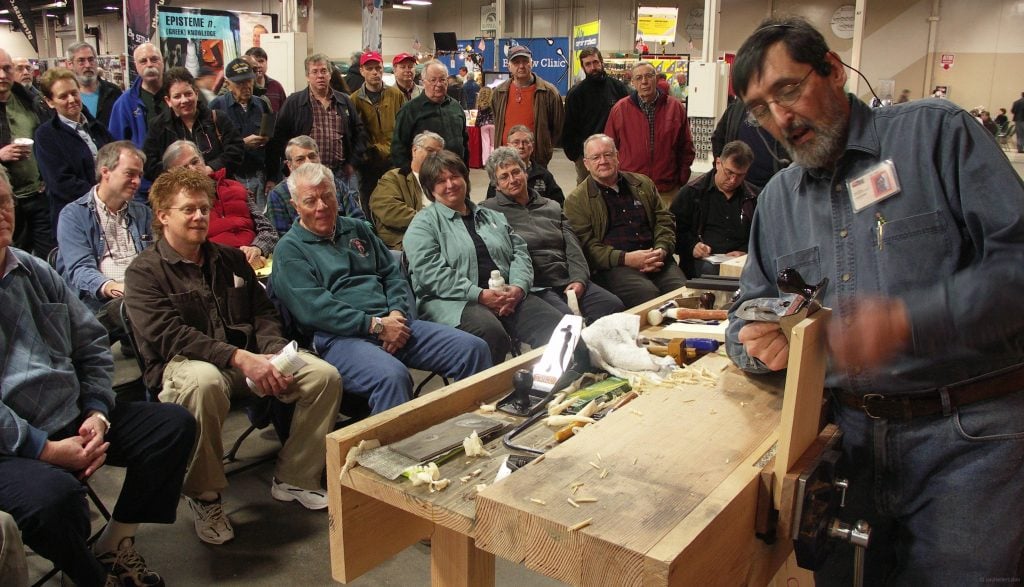 Slowly, as I began to engage with other woodworkers, mostly machinists, I felt myself gaining ground as I persuaded them to at least investigate the value hand tool methods brought to machine work. Methods I’d used for then almost three decades that worked so hand in glove with machines gradually became part of the lives of others. I ventured further afield, to places like Houston, Dallas and San Antonio, quite foreign climes to me back then, from my remote ‘country shack‘ in the Texas Hill Country where I first set up stateside. I’d drive for three or six hours to the more local unknown cities with my hand tools carefully tucked away in hand made tool boxes. I’d meet with the 30 or so men gathered waiting to meet and greet me. We’d chat back and forth as I began setting up. We drank coffee and snacked until everyone was finally seated and then I would cut dovetails and feel like an on-stage magician with every man sitting on the edge of his seat. What a welcome! 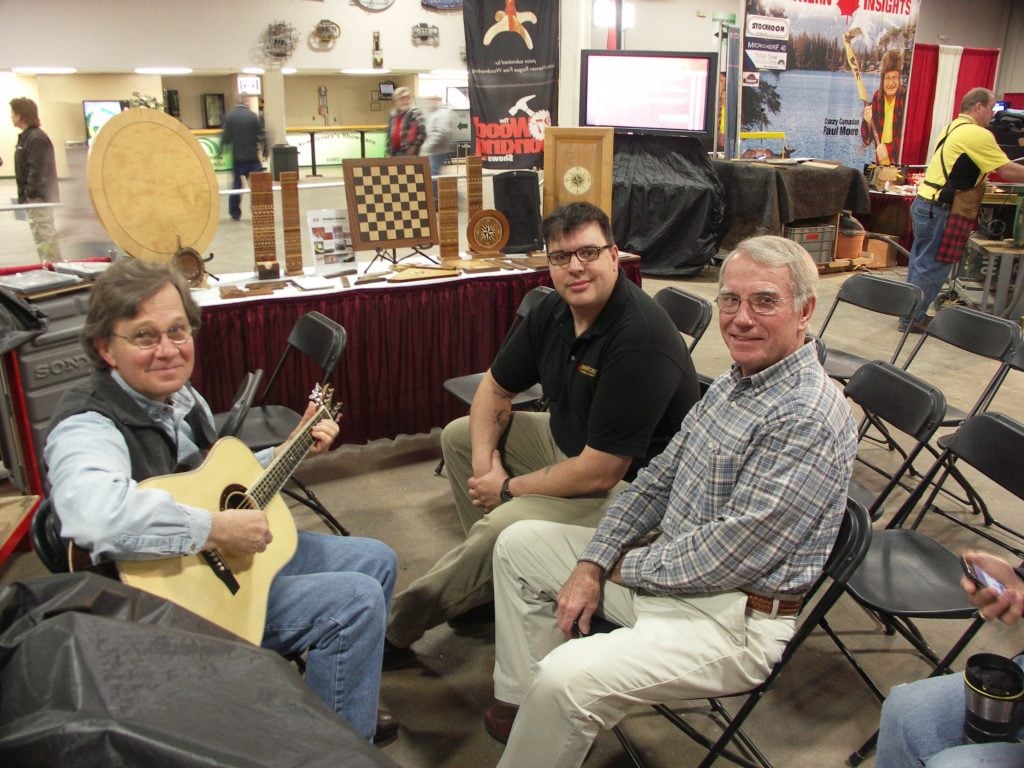 My friends at the shows along the way, Frank Klausz, Randy Johnson (from Taunton Press and Fine Woodworing) and Vic Tesolin (Lee valley Veritas) pickin’ ‘n’ a strummin’ (but mostly ‘chewin the fat‘) at the end of a woodworking show.

I began to see that was common to me was not at all common to American woodworkers at that time.  After my first two-minute dovetail joint, I’d pass it around and each man would grin to his partner and, reluctant to let it go, passed on the joint to his neighbour. That was in the late 1980s. I had never seen anyone else do this, nor did I hear of it; I was as amazed at their amazement as they were at my hand work. What seemed commonplace to me though opened the door to new possibilities they thought they could never learn. I demonstrated at every opportunity, wherever and whenever I could. I traveled the different states and was often gone for days on end. Craft shows on the one hand and woodworking trade shows on the other, In my last go around in the USA I demoed on the hour to 200 enthusiastic woodworkers plus woodworkers in the aisles who couldn’t find seats. Eight to sixteen times, 3 days per show over 12 weeks gave me good practice; somewhere close to 60,000 people listened and learned about my handy work trying to show people what hand work really could mean to them. That seemed a lot and it was hard work, but I enjoyed it once I was there and we did have lots of fun. Other craft events like The Texas Pecan Street Festival has over 300,000 visitors over the two days. Still well worth a visit I am sure. Well, then of course you might recall my mentioning the Northeastern Woodworkers Association show in Saratoga Springs in 3 weeks, 24-25 March 2018. That is another good place to be. 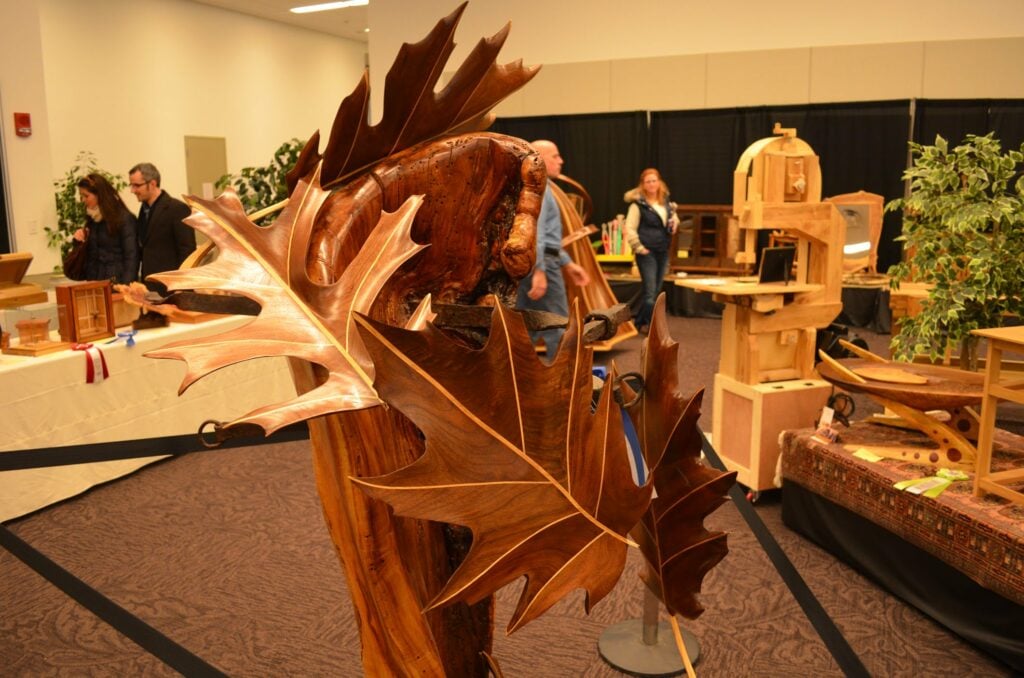 This morning, glancing over the stats on my youtube channel. 1,500 people an hour seems a goodly average. Hard to imagine having 30 million views over the brief time  since I began posting videos on YouTube. People like YouTube. It is as we know now one of the most popular places to learn just about anything from. Stats tell me that to my site there are 4.4% female visitors following woodworking with me. Whereas that is a very low proportion compared to 95.6% male that make it happen, it’s still triples what it was three years ago and double over two. It’s when I see things like 8.68 million minutes watched that I become ever more amazed. You see 60,000 people times 30 minutes each totals 1.8 million minutes but that takes me three months to develop. Imagine that people have spent 143,000 man hours watching my hand tool woodworking with me on YT and then in one tour one year 30,000 hours. But what puts flesh on the bones is how many take what I post and do it for themselves. Those hours of watching multiply hundreds of times into hours of doing woodworking in isolated pockets of creativity all over the world. 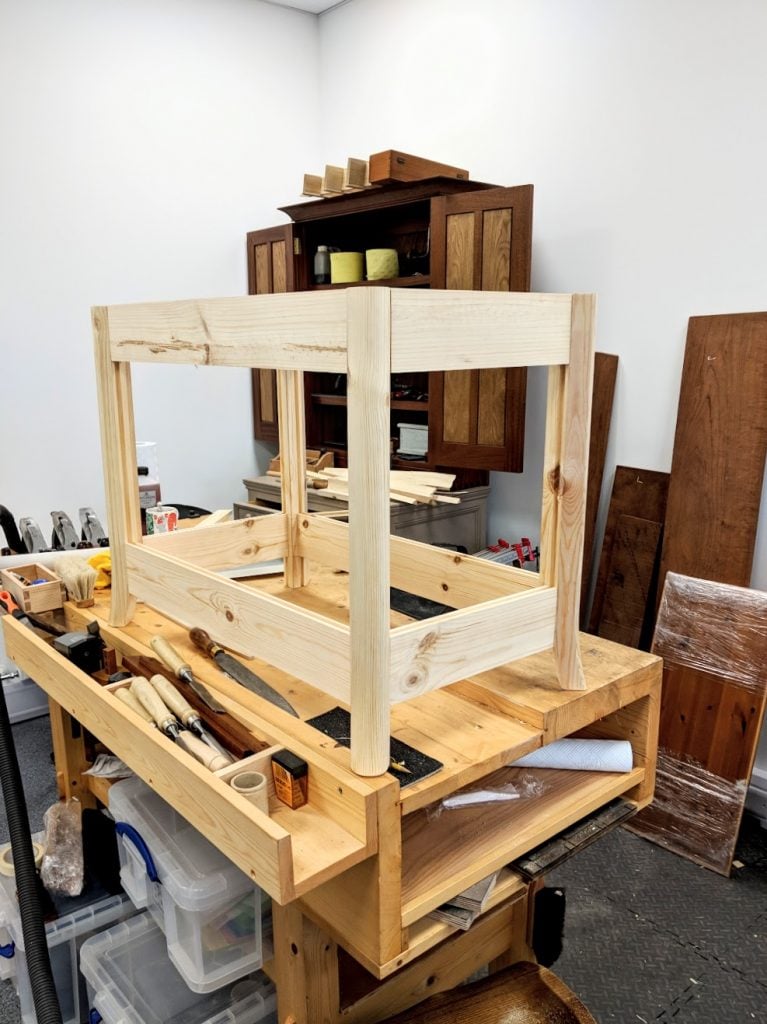 Today is Saturday. It’s quiet because of the snow we rarely get that dampens noise and activity. I walked to my new workshop to develop the prototype for my next project, a hope/blanket chest-cum-toy box. I’ve been experimenting with the leg shapes and I included a neat feature to present the legs out from an angle with kick at each corner. 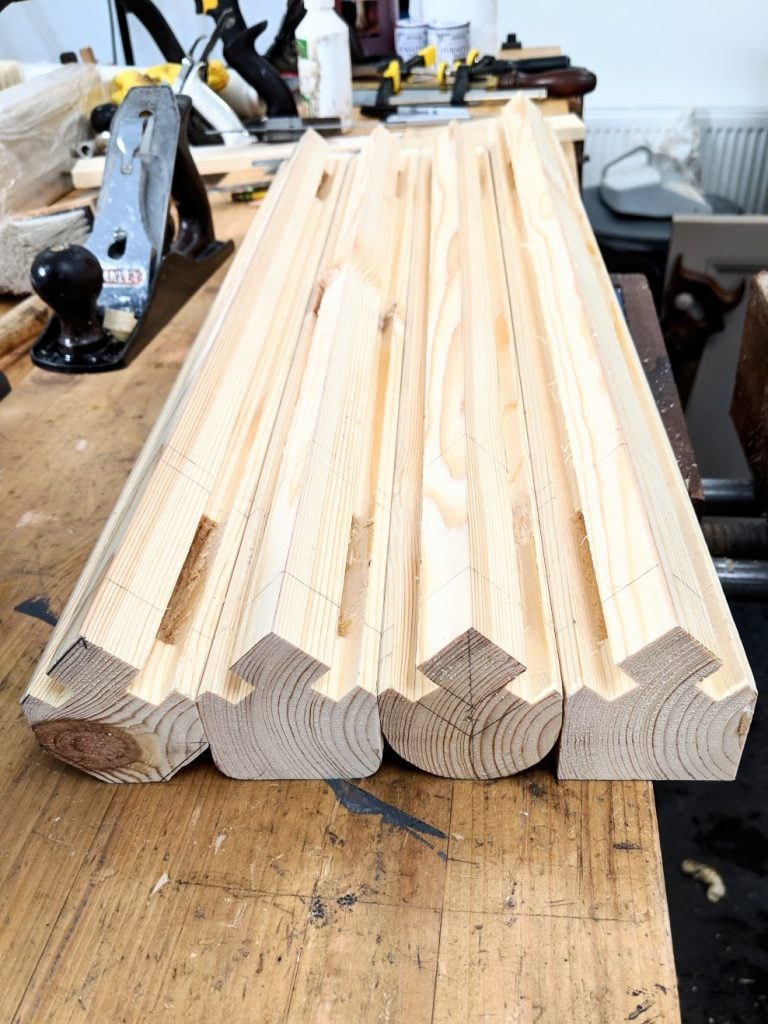 Historically, hope chests were given to young women to gather gifts from relatives and friends and indeed their own handwork in anticipation that they would one day marry and the contents of the chest would be the necessary items needed in a family home. Though it may seem archaic, the hope chest is still a popular gift and a  piece that gets good use for storing treasures, tools and toys. Originating in European homes, migration from the old world to the new brought with it a plethora of designs ranging from plain wood to figuratively decorated with carving, colourful toll painting and inlay work. Of course this chest could just as easily be a tool chest even though the lift up lids are less useful to us than we might think. For blankets and bed clothing like quilted duvets they are ideal. 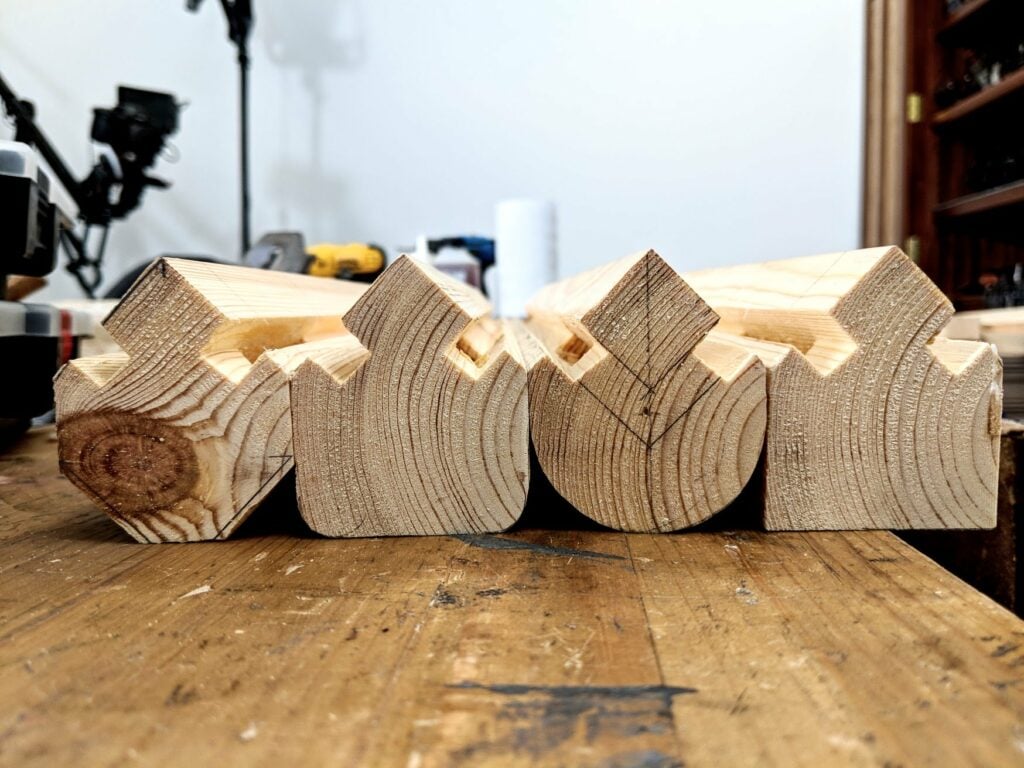 My prototype has reached a point where i can make my final decisions. The drawings are proven by the making of the piece and using them for taking off measurements and balancing ideas. The frame stands on its own four legs tonight as I type. All of the legs will need to be round if I am to finish them the same, otherwise I will need to make additional legs  to replace those that won’t suit the one I choose.

← Why Changes HappenIs the Scrub Plane a Sledge Hammer? →