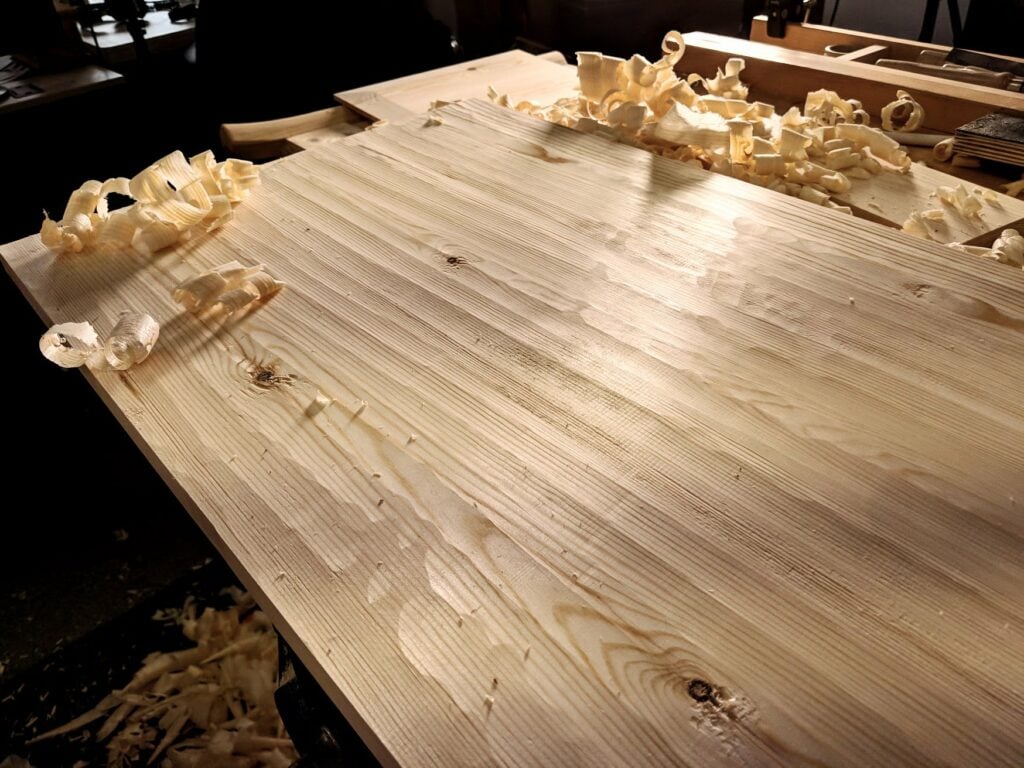 Results from my #78 scrub plane.

Here’s something I personally think is well worth shouting about. I’ve never seen anyone else do it as it’s one I thought up more for as another poor man’s woodworking tool. It’s a scrub plane made from an adapted #78 rebate or rabbet plane. Using the term ‘scrub’ mis describes it. It doesn’t at all enhance the opinion of what this tool is capable of or a actually does—makes you think of scrubbing floors and deck scrubbing on vintage ships with wooden decks, such like that. Though principally designed for roughing off copious amounts of wood, the scrub plane gives us much more than that. I have two types that I rely on, alongside my wooden versions that is, both are as invincible in reducing the highs and lows in wood as anything I’ve used. This #78 plane is a champion for those who really do not want to use machines. As with my Stanley #4 scrub plane, it can also be deployed to create angles as narrow chamfers and then on up to wide bevels for raised panels too. I reach for it when creating bullnoses, to remove the bulk first, and It prefaces the work of both the smoother and the jack and then often takes over where the handsaw leaves off. 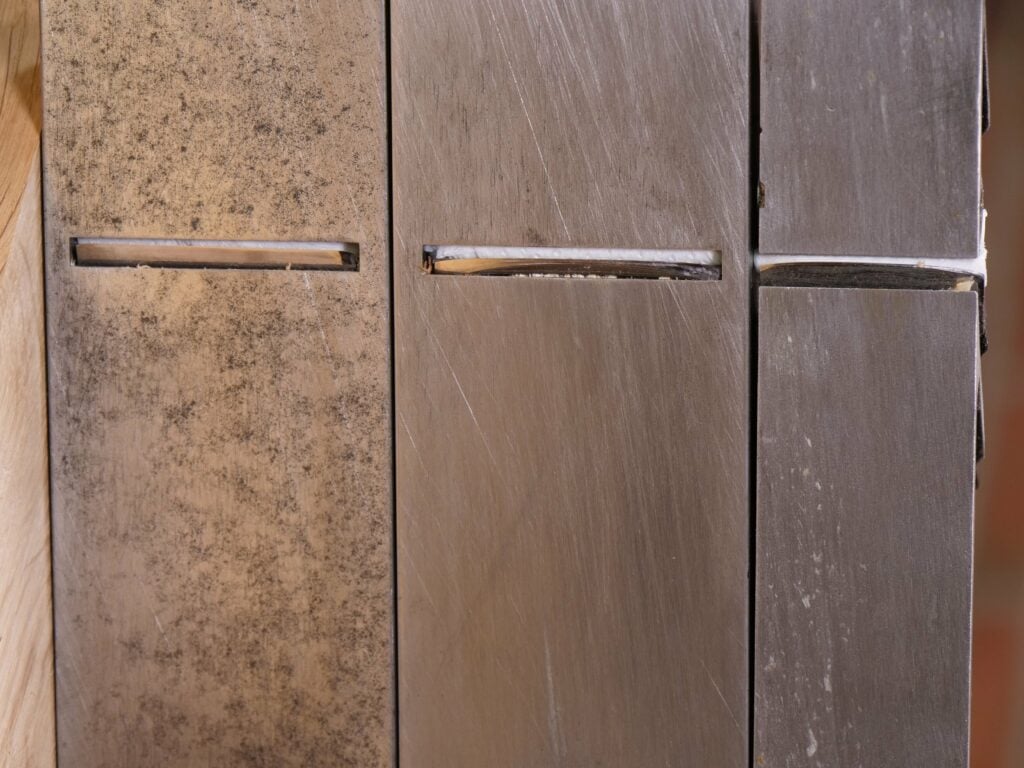 The three-prong attack team for reducing stock. Heavy removal with my #78 adapted scrub right, #4 smoothing scrub middle and #4 smoothing square across left. What a team!

Even though many Stanley planes originated in the USA, there is one plane I know of that most woodworkers in the USA will never have actually come across let alone have used. The Stanley #40 scrub plane was the first all-metal production model scrub plane mass made for the US market. We rarely if ever see them here in the UK. Unlike many if not most of Stanley’s other plane versions, the # 40 was never copied or made by a UK maker and so it is indeed a scarcer find here in Britain. Magnify that a thousand times and you’ll find the same throughout  the whole of  Europe too. If you did happen upon one somewhere you most likely would not give it more than a cursory glance—most likely you might buy it for that reason alone. It’s without doubt the ugly duckling of all the Stanley range of planes. There is no doubt, the Stanley #40 scrub plane is the ugly duckling with it’s black-Japanned paint and basic looks. It’s redeeming quality on the other hand is that it works  well; it removes and reduces stock thickness in almost any wood in a heartbeat, even across wide boards of oak, cherry, walnut, ash and many more. It’s demise resulted when machines hit the woodworking industry and mass making entered even the smaller home workshops as affordable beasts of burden in wide format. Power planers replaced them at the point of release by Stanley and soon, as with most hand planes for woodworkers, they were soon rendered obsolete. But in my view the scrub plane comes in very handy for a range of tasks revolving around removing stock in quantity and fast. This is especially so for those of us who rely heavily on hand work. Even in machining, when stock is cupped so much that the crowned and cupped board cannot pass into and through a power fed machine because of its limiter restricting a fuller depth of cut, the scrub plane bails out the machine. This can be especially helpful for heavy stock as in beams and joists.

Watching me use the #78 scrub plane is captivating for me because it works so obviously well and you start to wonder why no one thought of it for a common tool. Well, it only took me 50 years to get here!  I’d love to see what happens when people watch my video on it for the first time today! 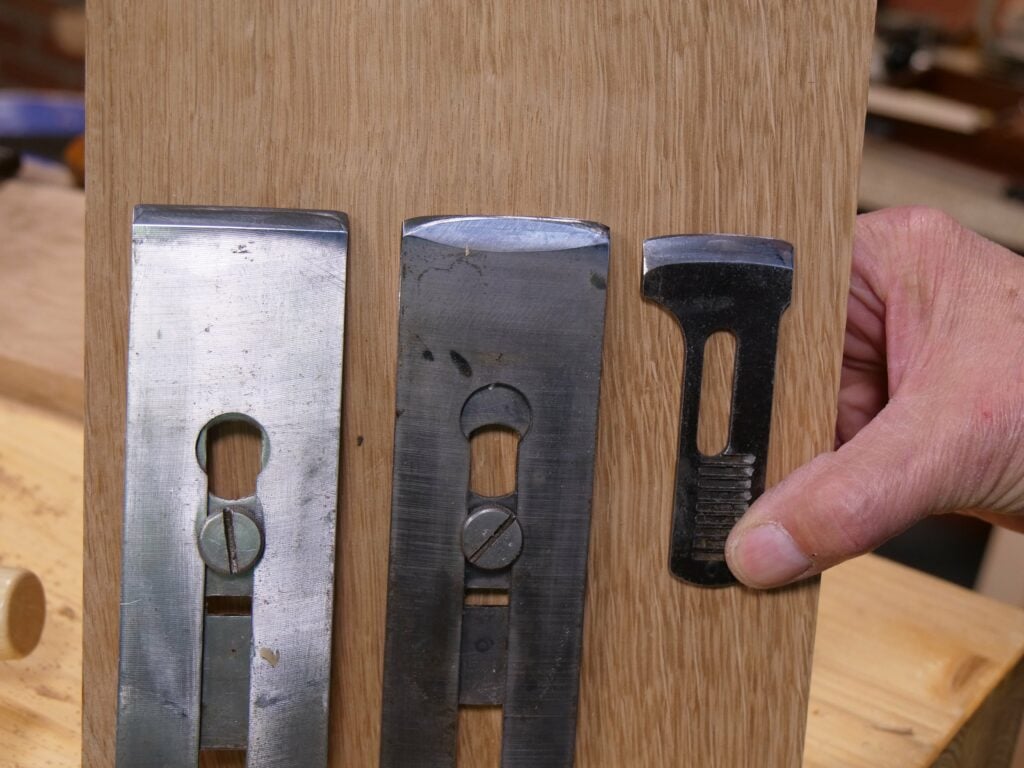 Here’s how the cutting irons look with regards to straight cut and radius differences.

So, yes, you are right, Stanley didn’t make a #78 scrub plane, they made Stanley #40 scrub plane. You are right and then you are wrong!  Stanley made a #78 that I repurposed for a scrub plane to function as well if not even better than any all cast-metal scrub plane ever made. The à la Paul Sellers is scrub plane will amaze you. By using a regular #78 plane body and the same or an additional spare cutting iron, in about five minutes you will have two planes for little more than the price of one, a scrub plane par excellence, and a regular rebate plane for which the plane was designed. Alternatively, of course, you could go ahead and buy a second plane to dedicate as a scrub plane. I bought two on eBay for £10 each and though they will go up in price after the video goes on YT, it will level off again I am sure. (Maybe not. Look what’s happened to the Stanley and Record #71 router plane as a result of our work.) Anyway, how we missed this for so many decades I’ll never know, but change woodworking lives it certainly will!