It’s coming together. We have already filmed several videos and I’m adding the missing bits as we go. This week I have been building my shelves for the wall behind me whenever I had a free minute or two. It’s hard to workout why it’s called work. I have it together and now I am ready to apply the finish which will be the waterborne clear satin floor finish. When that’s done and in place I should have my stuff, currently scattered too randomly for sanity, all in the near right places before final tweaking. 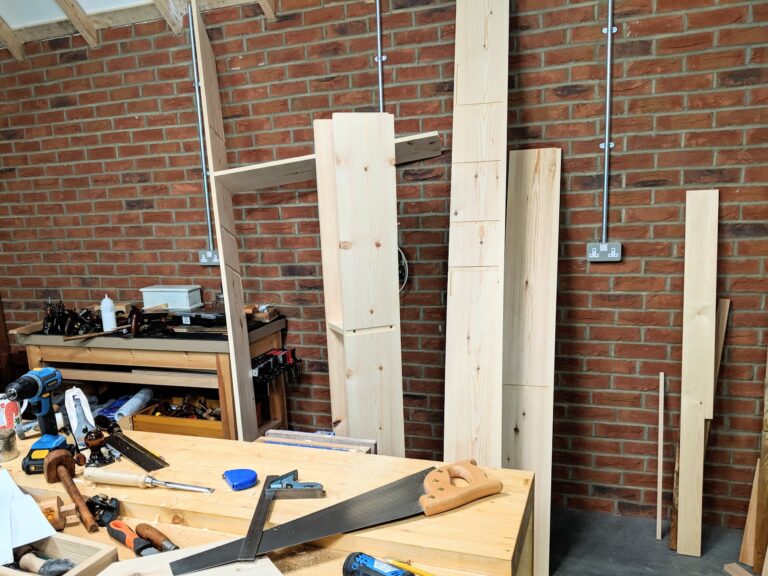 I’m pretty well settled in so now it is mostly about adding the missing features that have for two decades worked and now become non-negotiables; my saws held on my right towards the end of the workbench for instance, my sharpening plate shelf, my bench drawer. 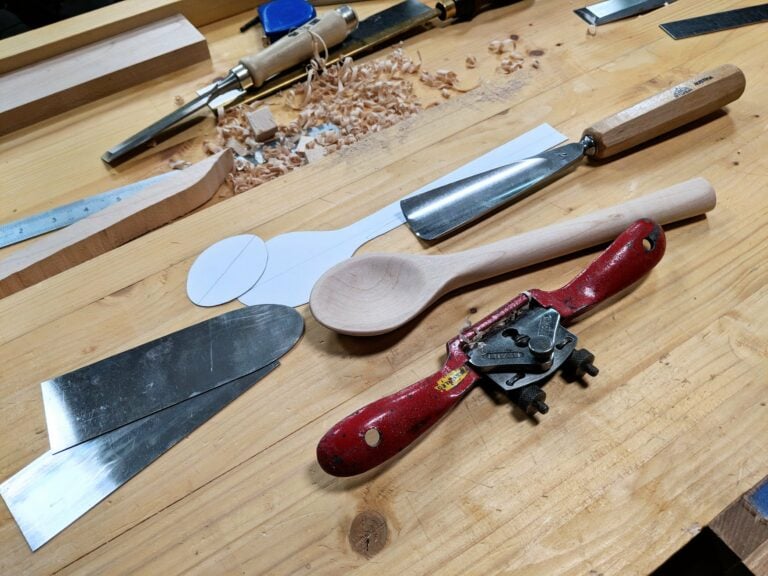 In between fitting out my workshop I have continued some filming events and working with the team has become so much easier as we now all fit into my creative workspace without us all breathing in. To say I am more settled than in a long time is an understatement.

I found time to hang my saws to my bench with the toggles atop for securement. That happened only a day ago so I was very happy about that. We actually filmed how to make them and determining where and how to arrange them so that will soon follow. 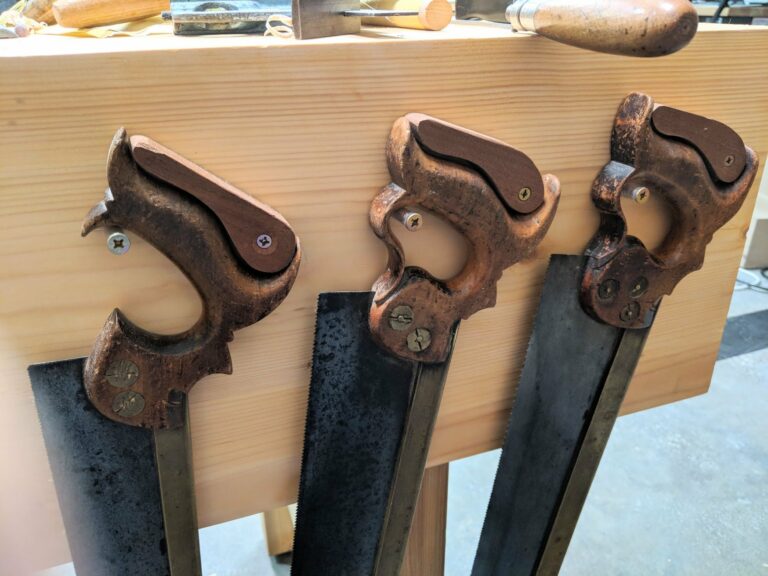 What has been most impactful over the more recent years for me has been being able to do things as they should be done rather than always done in a hurry. I know what it’s like making the most of every minute because time is the scarce commodity. How much more is that so today. At least that’s how it seems to me and of course with the viewing audience trying themselves to strive for skilful work patterns with quality outcome. 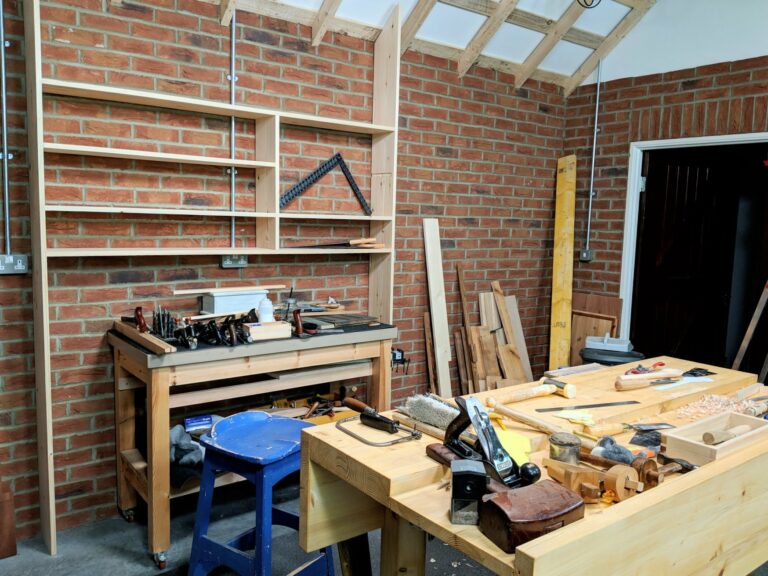 Making my shelves has meant 14 housing dadoes and 4 stub tenons, 4 full tenons and corresponding mortises currently in the making. I am using redwood, a pine softwood from Eastern Europe. I’ have worked with this as a medium density softwood since I was 13 years old and it is still one of my favourite woods for a range of reasons including stability, smell and ease of working. It’s my predictable wood and it is one that has been used for working class families for well over a century. This is the wood you found in servants quarters and mansion kitchens and generally the “below stairs” life where many softwoods came under the vernacular name of ‘deal‘. 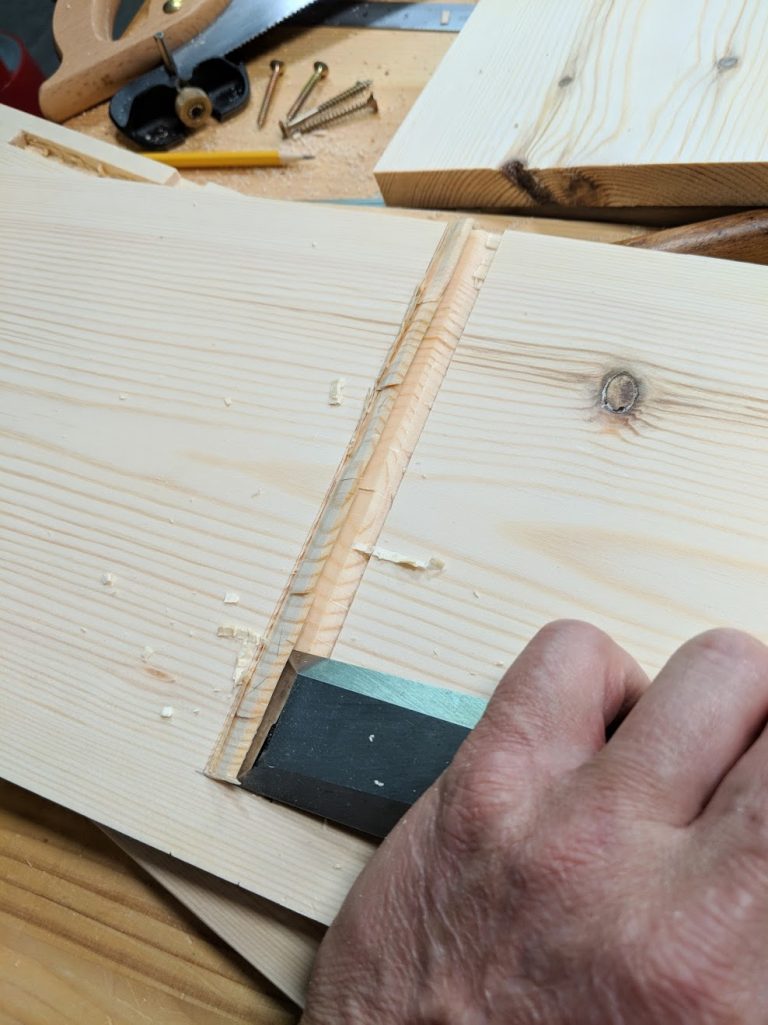 Though my working is always serious, mostly because I take most things in life as serious, it does not mean that it has ever become mundane or dull at all. work is as it should be, enjoyable. I just got home from applying the last coat of finish and tomorrow I will assemble all of the components for the last time and stand it in its final place for fixing in place.

10 thoughts on “My Garage Workshop Excites Me”