Quick release and cast-metal woodworking vises are not all created equal. Some are intentionally made low grade, others high. Some are intentionally engineered with something we call toe-in, meaning the top edge of the front vise jaw touches and aligns with the rear vise jaw but the lower area has a 3mm or so gap. Whereas others are simply manufactured badly and result in toe-in or toe-out and have many other discrepancies leading to uneven clamping, its the ones that come manufactured by design that we sometime malign because, well, it just doesn’t seem right. The problem is that we cannot always know which is which, but when we buy well-known makes we can generally be assured it was intended and that there was indeed a purpose to it. 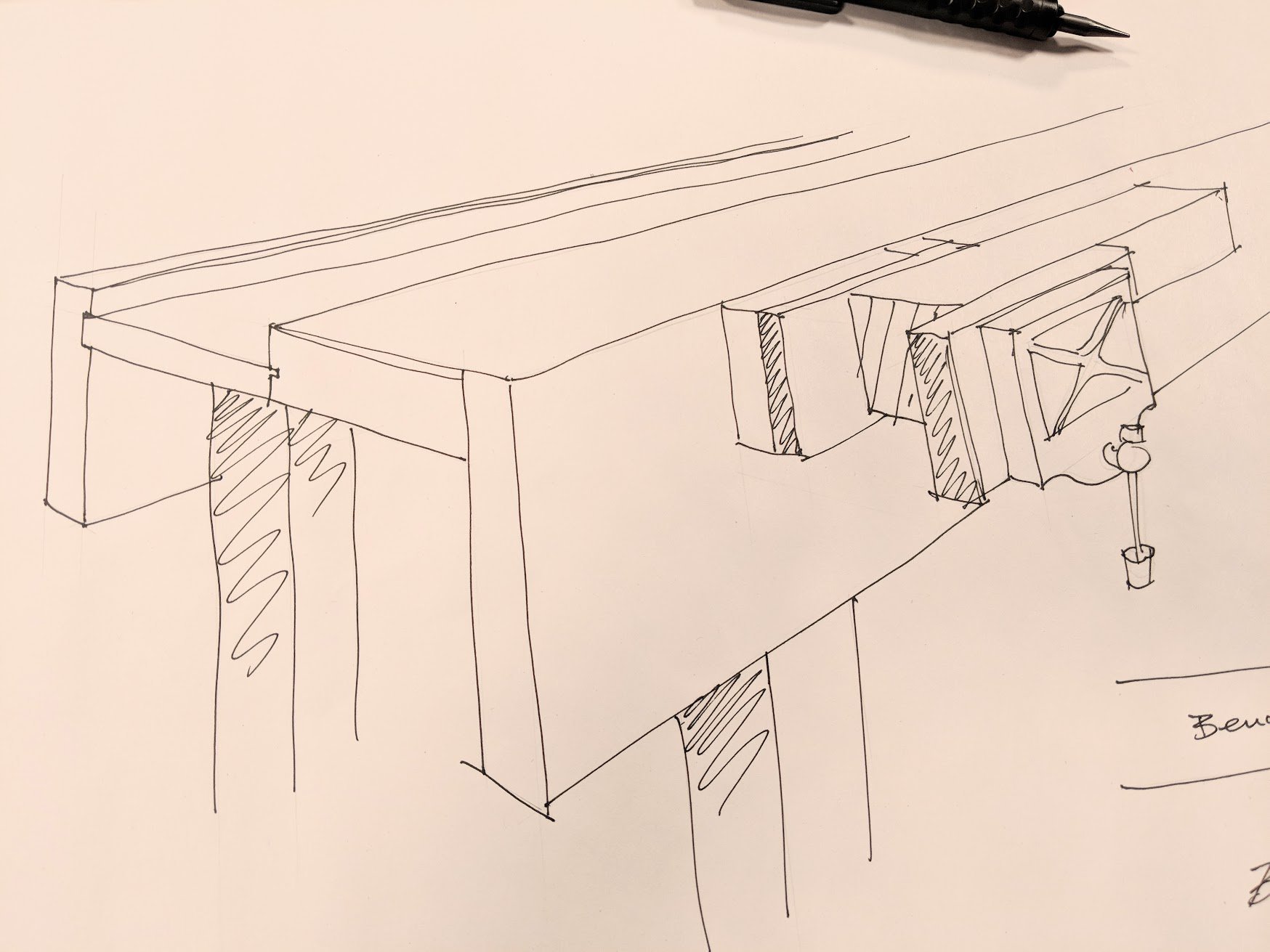 The questions are fairly consistent: “Paul, my vise jaws are not parallel and I think it’s due to poor manufacturing standards. How can I correct this?” Usually this lack of parallelism is vertical; the top meets and leaves a few millimetres open at the bottom. Sometimes the lack of parallelism is along the long axis of the vise jaw and leaves a gap at one end or the other. Sometimes both conditions are present in the vise jaw. Usually we are talking about the outer jaw when it closes onto the ‘fixed’ jaw—the one attached rigidly and immovably to the fore edge of the workbench top. In either case, this uneven closure is engineered to advantage us when we clamp the work in the vise. Metal-cast vises always apply pressure and leverage from the lowest portion of the vise; that extended half moon where the winding mechanism is housed and passes through the front jaw into the winding mechanism below and in the rear, fixed jaw. 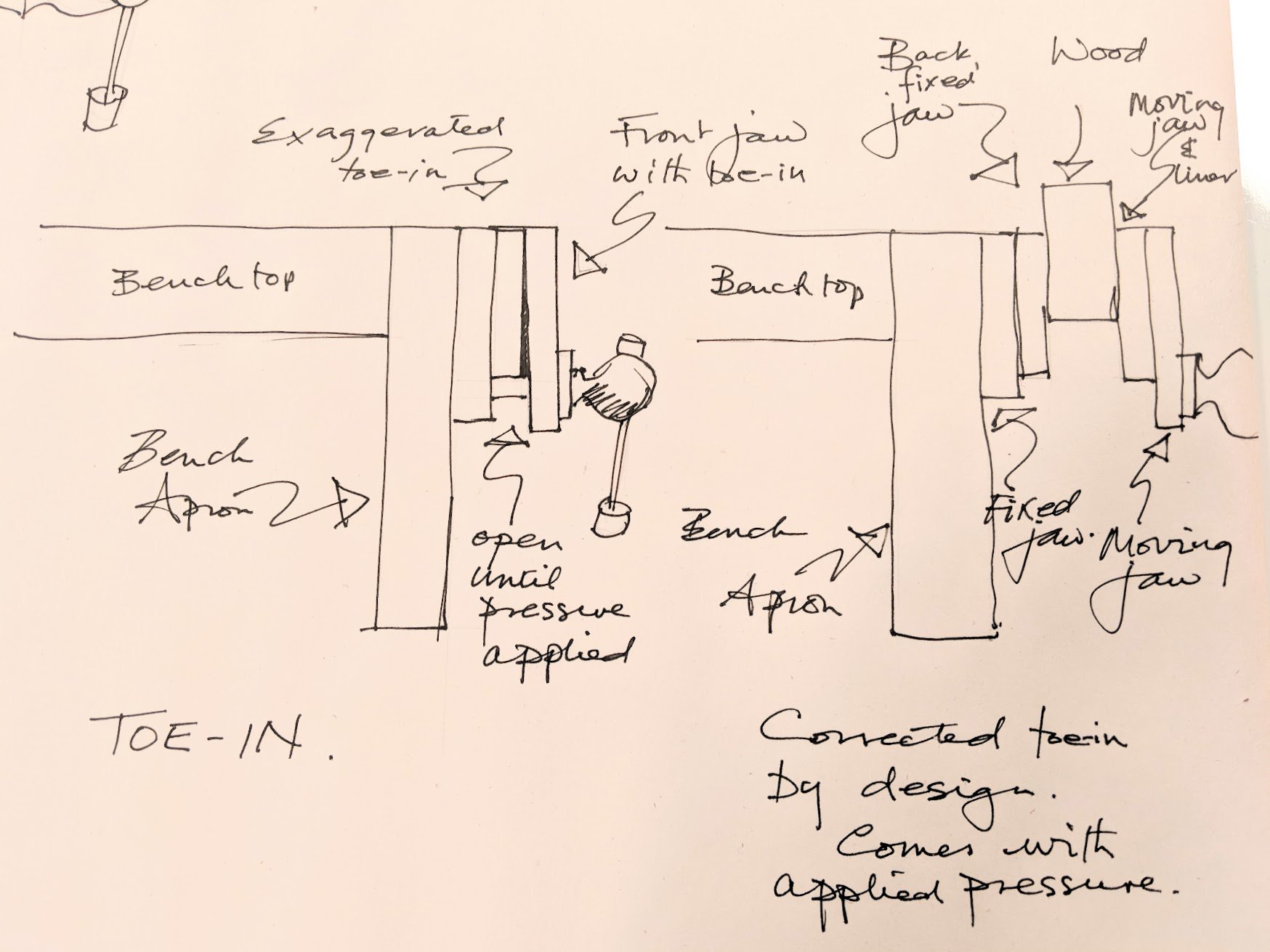 If the jaws are parallel, as on lower grade vises and vises with too much play in the winding mechanism, the jaw bites at the lower portion of the vise and when further pressure is applied via the front moving jaw the leverage compressing the wood forces the top of the jaw even further out and away from the top of the fixed rear jaw rather than in. This then means that pressure is applied very low down on the workpiece resulting in inadequate pressure—the work doesn’t feel solid as we work on it in the vise, whether that be for chopping, paring, sawing or planing. We need this third hand, the vise, to be equal to the task and even stronger than our own hands for many reasons not the least of which is safety for ourselves and our workpiece. Slippage means uncertainty and a loss of confidence. Not something we want at all. 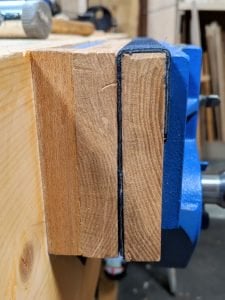 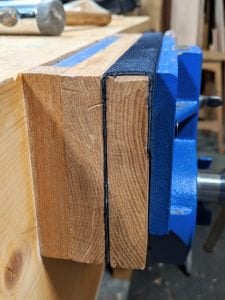 …and closes onto the wood across the width and length of the whole wood when pressure is applied.

Even on good vises jaws without toe-in occur. We had it shipped and it’s a weighty piece of equipment to retrieve once fitted to the bench top and then repackage and return. The nuisance factor is there. Personally I might prefer to go for the quicker fix. I’ve done that. I needed to get to work, the vise was otherwise soundly made and taking time out in that day was not really an option. Today it might be somewhat easier with return slips and labels so readily downloadable, but it is still very inconvenient. 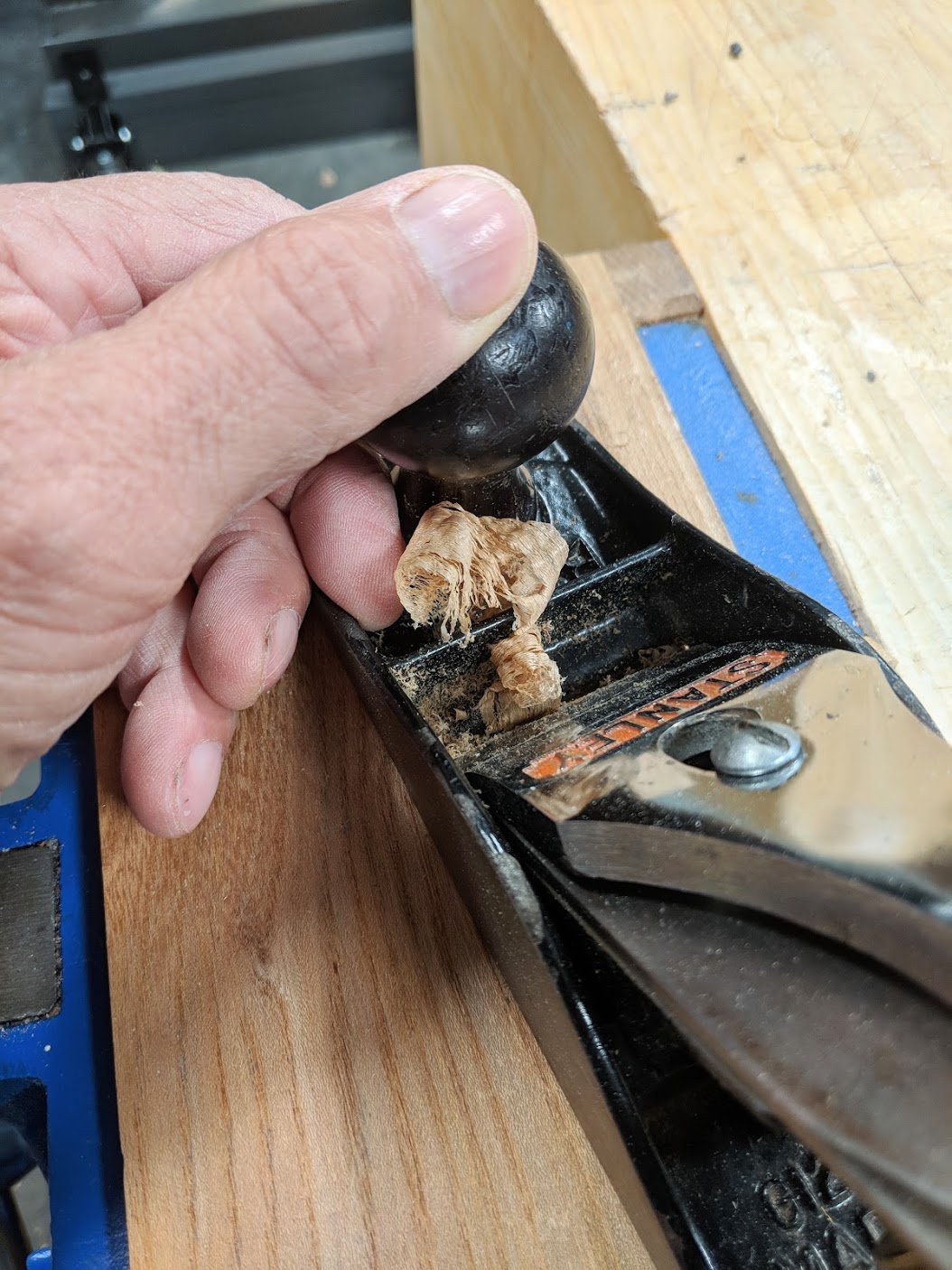 If you remove the wooden vise jaw and plane it 3mm our of parallel so that you have a 3mm gap at the bottom when  the tops of the two jaws meet you will be applying pressure first to the top of the piece being clamped. Further turns of the vise handle then applies pressure gradually down the work piece as needed.

Of course if the jaws are out of parallel along the long axis of the vise jaws, along the top edge, you can hand plane the wooden jaw liner out of parallel in compensatory measure and that will correct the issue.

← Destressing Your Bandsaw WaysValue Added Worth By Work →