I’ve worked with many cast metal hand planes through the years, probably all of them. It’s my interest. Woodworking fascinates me but after the initial introduction, perhaps a few years, maybe five, you start to realise that there are many aspects to the craft that expand the whole to capacities you will never fathom. Bruce Hoadley was a scientist that spent his whole life studying wood alone. He wrote on it, researched on it, experimented in various elements of it.  Additionally he liked to work the wood, carve it and make things from it. That led him onto the use of tools and so yet another sphere was opened to him. That is what happens when you step away from the industrialising processing of wood and cross over to the light side, into the creative realms that help you understand who you are, what wood is and why you are fascinated by the substance of it in as much an entirety as you possibly can. 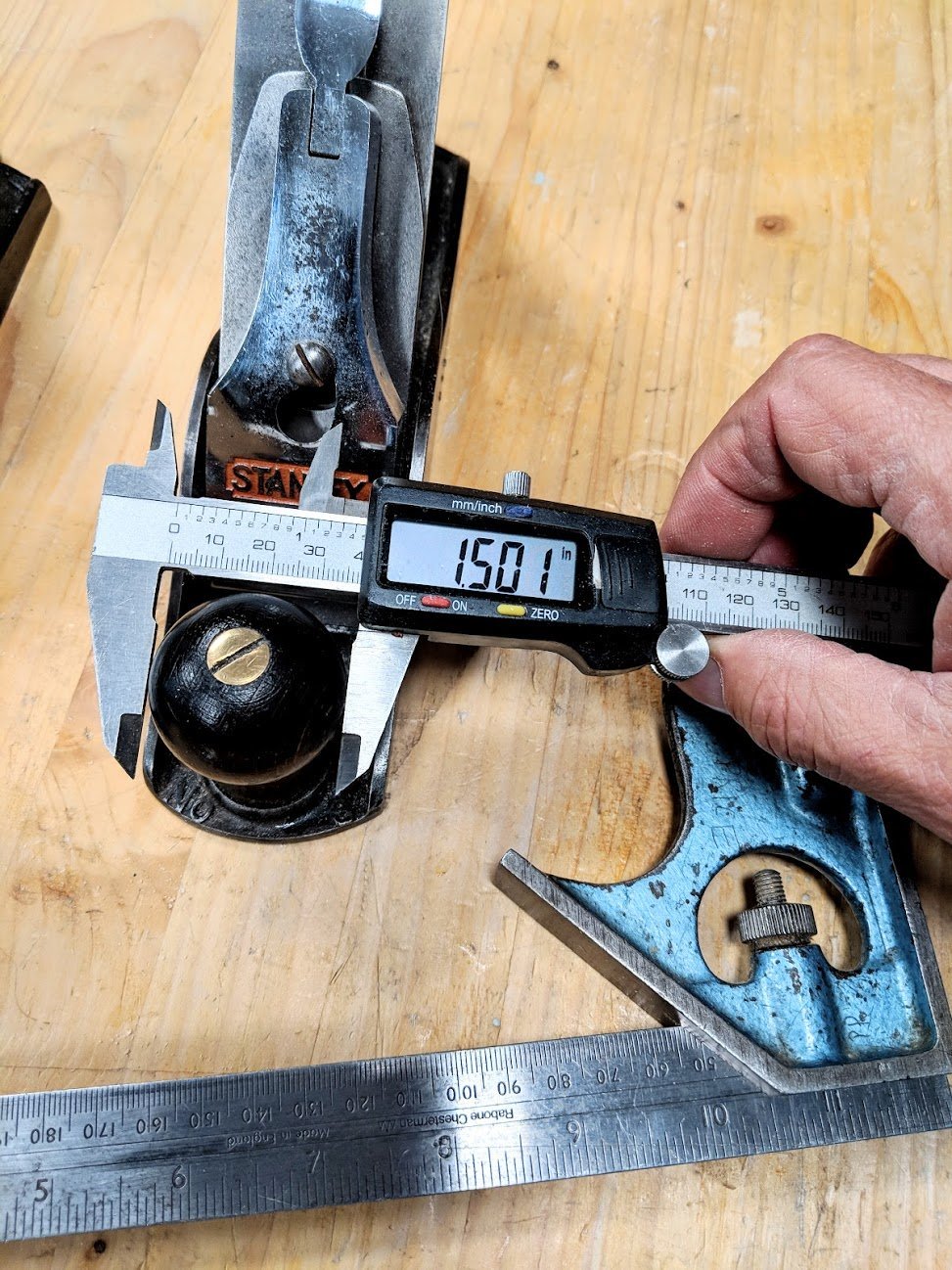 In my world the wood often absorbs me and before I know it I am held  by plumbing the depths of its inner fibres in search for the deep and hidden. Of course the wood is not transparent until light passes into and through it as in super-thinned slivers or shavings, so all that I see is a surface that is no different than an image. I am not plumbing its depth. Not really. Whatever distance my eye is from the woods surface is the depth of penetration and no more.  If light does actually pass through wood it becomes distorted by the refraction of light passing into and through the fibres and of course by the limit of our eyes that focus and refocus to adjust to depths to probe more deeply.

When I say I am ‘plumbing‘ its depth in search for the deep and hidden, I am talking of the wood’s inner fibres, but technically at least I am looking at the wood in the same way I look at a topographical map, where the 2-D surface is showing me the high points and low points of land with its torrs and valleys. Yew is a wood that especially tells a story. Growth rings on the flat sawn and planed face show the position of bends in the wood as it grew and was blown by prevailing influences as well as the position of knots, fissures and the effects of minerals and parasites. I never tire of being marvelled by wood growth. I search it. I search even species that give so little away—birch, aspen and such, from temporal and boreal climates. For colour and grain configuration, these woods are at best bland to look at. They have hidden qualities though. My pictures of planed yew show its exuberant personality. So the searches, at least for me, are unending. 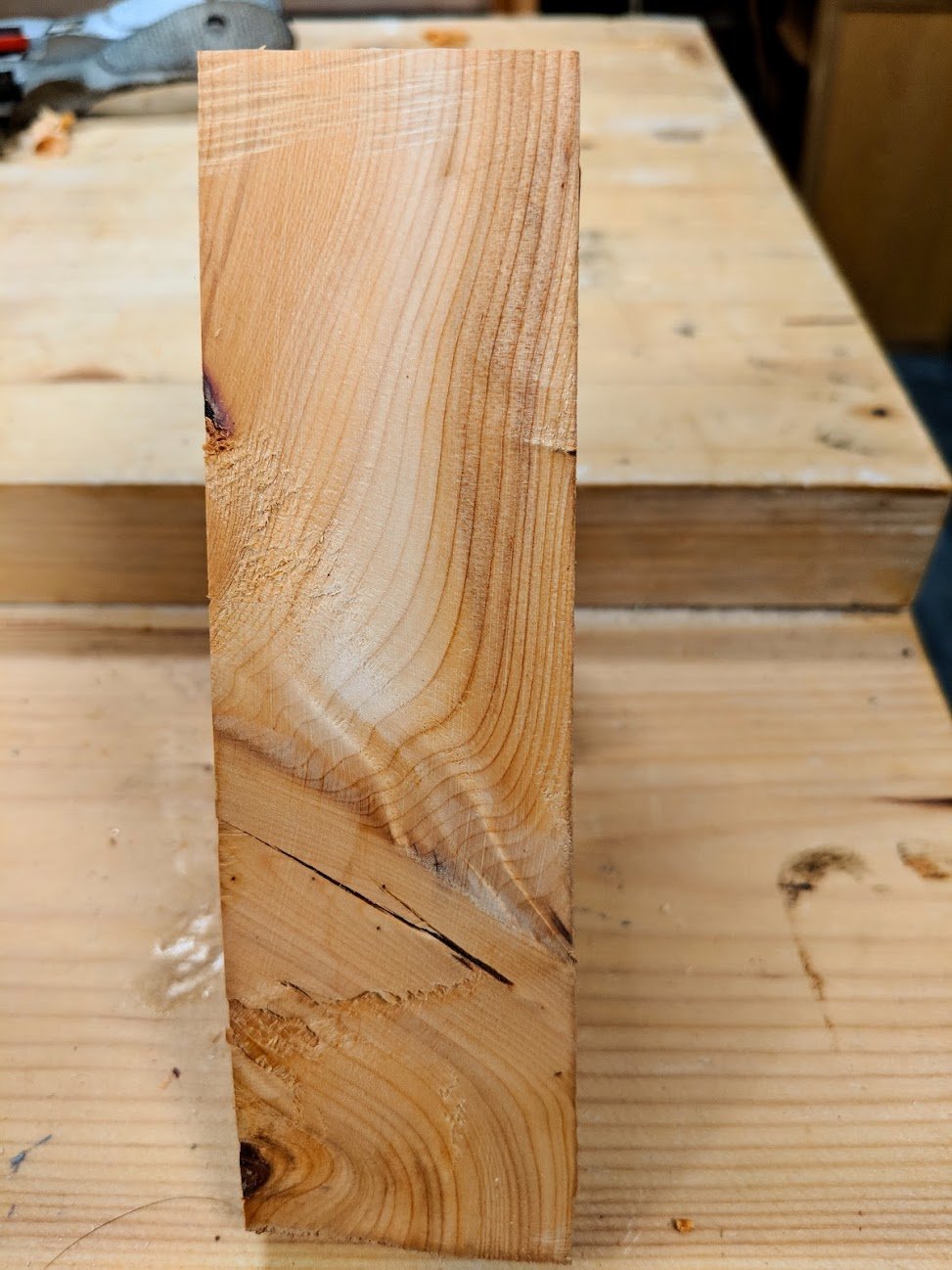 A section of yew with the branch root in the main body of wood shows extreme elements of grain shift to increase resilience to encompass the branch as an integral system to hold the branch in place.

Beyond the wood I become mesmerised by the tools I work with. Sharpness has new meaning once you understand the level of sharpness you must achieve in preparation to execute the perfect cuts in wood you strive for. The demand for loveliness in work soon drives you to that ever-sharpened edge that divides the waste from the wanted and the crafting artisan from the wood butcher. Every plane type has it’s own idiosyncrasies and this translates to the same level to all of the other tool categories. It never stops and you never arrive. If you are like me, you never want to arrive because that means you never have anything left to discover. Because we never can fully understand wood, there is always something to discover, something to be revealed to us. This alone should amaze anyone as they travel along the journey into wood and its working. 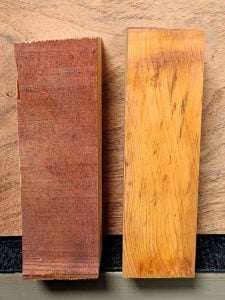 The colour on the left piece shows the effect light has on changing the colour from cream to pinkish red. The one on the right shows the depth the light as changed the colour of the wood below the mere surface. 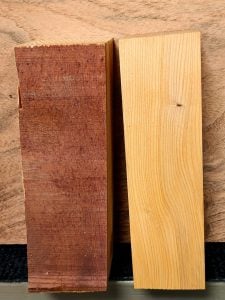 Planing the wood more deeply shows the shift in colour and grain configuration as we move from the surface the deeper inner fibres. Each level tells a story of what’s inside the wood.

In making my plane handle for the main rear tote, which takes a lot of shaping, I found that the yew was very inviting. With its dense grain it shapes well with carving tools, rasps, spokeshaves, saws like coping saws and planes. It scrapes if some tool fails to and sands beautifully too, so for plane handles it is more than an ideal wood.

Watching the grain change stroke by stroke as the levels peel beneath the spokeshave and chisel is electric if not mesmerising. This peeling of levels changes constantly as I work the wood. 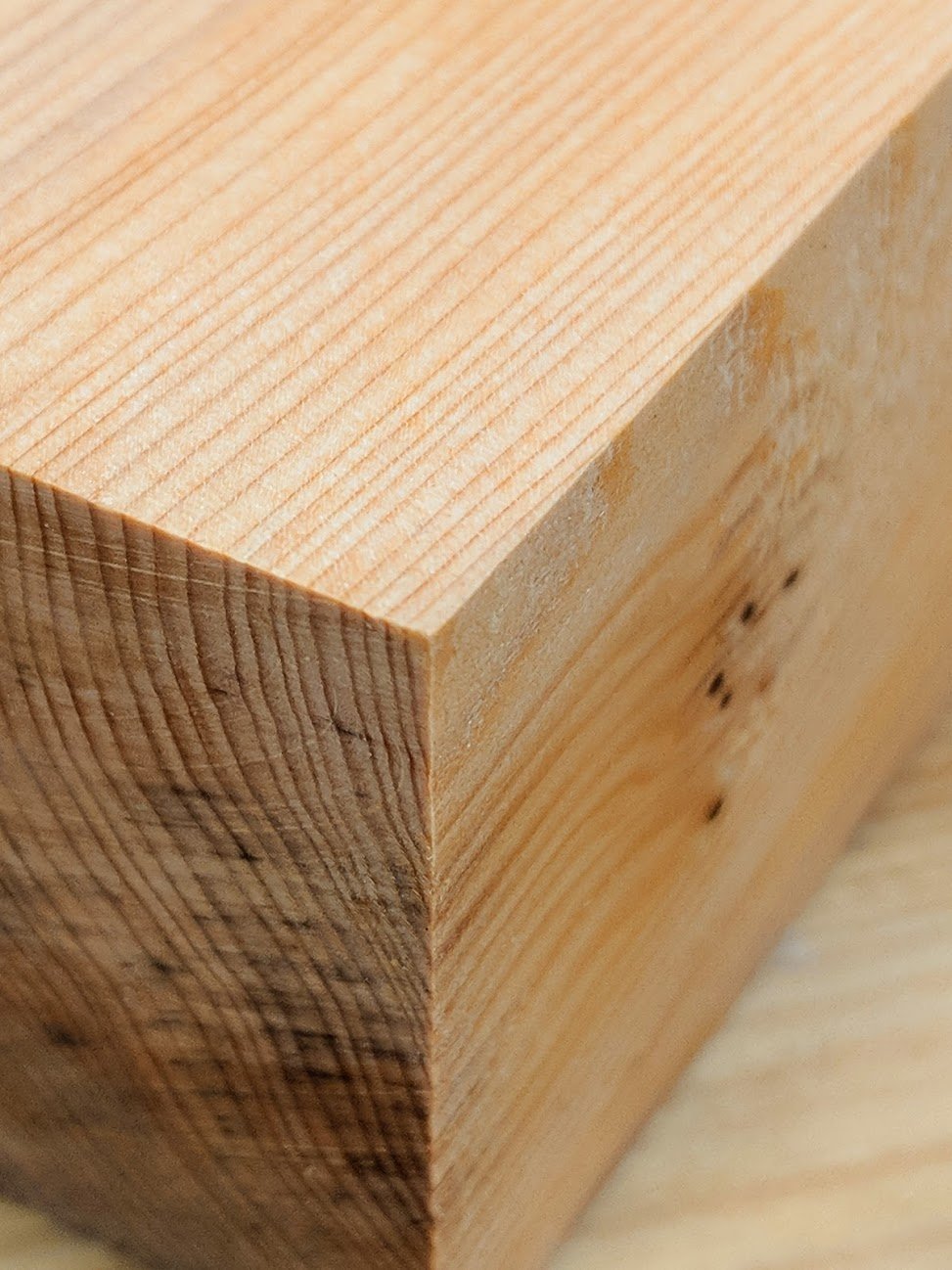 See the pin knots on the side face right… 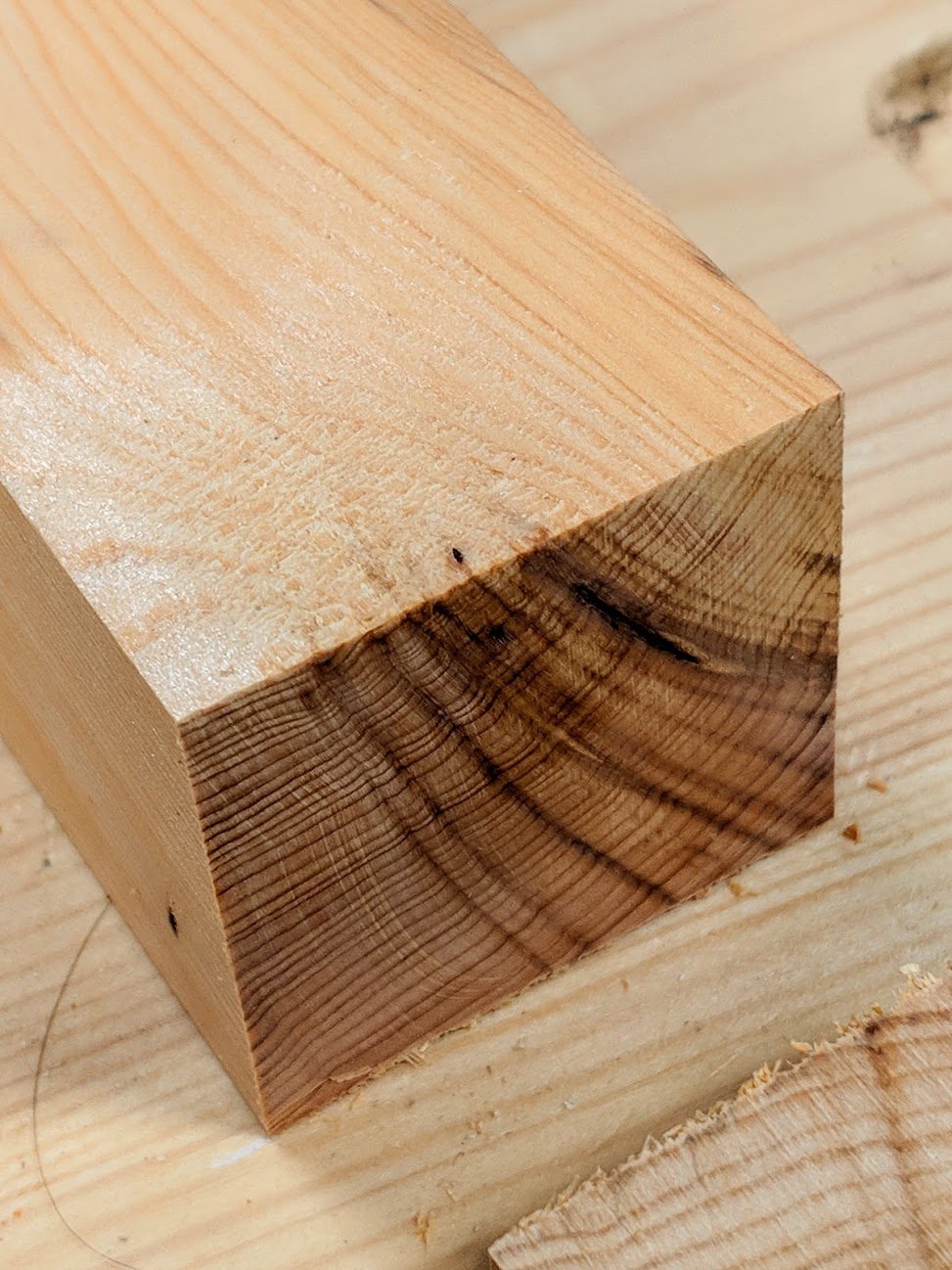 .. and now after the cut through. Notice too the torn grain resulting from the pin knot area after planing.

The transitioning of interest in woodworking gradually encompasses the inner desires to understand more. I think that that has driven many an author who extended him or herself to express that inner working to others. As communicators they desire to let people know what they have come to know. At the workbench this is rarely expressed and I believe that is because people tend to be more private about such emotions, not perhaps realising that someone near might enjoy their expression  of what they see and feel. In making my plane handles I felt myself all the more in awe of how the wood worked and then experienced admirable qualities of strength, resilience, colour and grain configuration. Yew is common enough as a tree, but it’s less commonly yewsed (could help myself). It’s more common as a veneer for wide surfaces which tells you something about its dark side characteristic of being unstable in wide boards. Tabletops and rails, door stiles and such do distort and twist quite readily. For plane handles it is about as good as it gets. Getting hold of it may not be quite so easy. 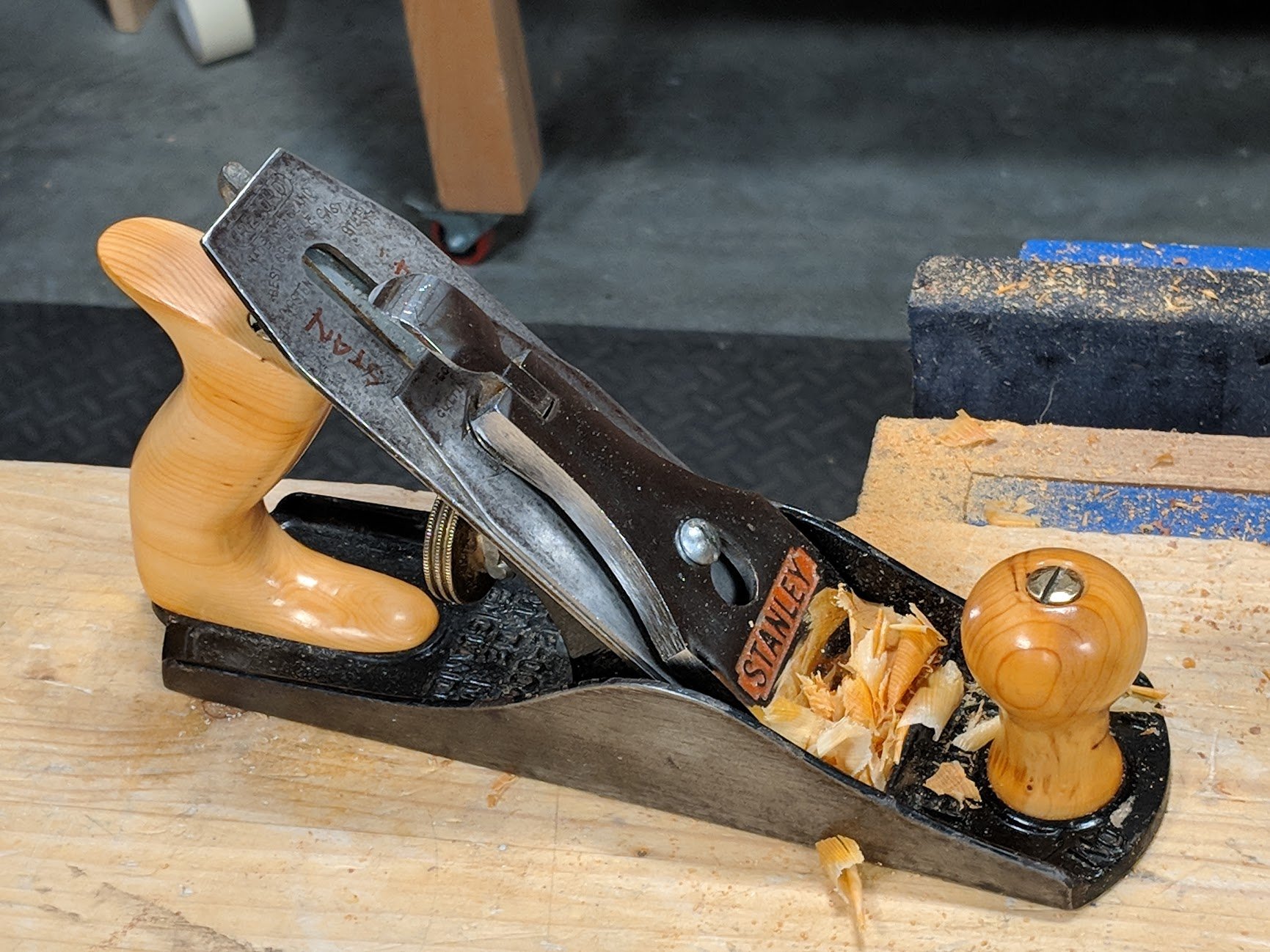 Most of the woods we woodworkers use are not in general particularly toxic but you can be or develop an allergy to woods as an individual and indeed if woods are used extensively day in day out you can simply become allergic to it. But there are of course toxic woods and yew is one of them so work with caution, avoid blowing the wood dust during and after sanding and always wear respiratory protection when using machines or during sanding. Though I have turned it and worked with it using hand tools on and off through the years and never had any health issue resulting from working it, that does not mean others will not have an incident using it.

Remember though that the dust resulting from working the wood, and I include all woods here, are in fact irritants and breathing the dust into your lungs draws in particles that irritate the lining of the throat and lungs  My common practice is indeed to wear at the very least a dust mask in any dusty environment and not just for wood dust alone. It’s plain good practice.  I also use a filtering full head mask/shield where my head fits inside a canvass hood to enclose me to pretty well cut me off from the outside world; indeed, it brings in totally filtered air constantly and the air is filtered to near total purity when it reaches my face and my intaking air. I have always used protection when using machines because machining causes its own vortex to swirl the dust and it can be difficult to contain or extract that dust. Even after the machine is switched off the dust that you cannot see, the dangerous dust, can linger in the atmosphere for an hour. Sawn dust from handsaws should not be an issue but please, again, exercise caution. The fact that the travel of the handsaw is so limited in speed and distance, and compared to a machine very slow, the particles are far larger than those created by machines that float in the atmosphere so great a concern. That said, some people may be allergic and have a reaction at any time to any wood and you may want to wear protection.

In our work environment, because there are sometimes several of us working in an area for filming and recording, we use a sophisticated measuring device that checks the air constantly for general air quality and dust levels. Mostly we never reach even a measurable level of dust so never come anywhere near danger levels. Though we may use random orbit and belt sanders, bandsaws etc our extraction systems surrounding machine work works very effectively. So between all of that I and the team are all well taken care of.

Tagged Plane
← (About George) Then There Was BillDare To Dream! →