If you’ve read passed blogs you’ll know I often use two tools alongside one another at the same time meaning saws, planes scrapers and such. Using two planes alternately and then two or three card scrapers and even two #80 scrapers in quick succession one after the other leads to economy of time and effort, mainly because you can have them all set differently, even slightly so heavy cuts with one and lighter with another mans minimal resets and of course two planes give at least twice the use time. Anyway, I find it’s the most economical time wise and of course with card scrapers it gives them time to cool rather than burning your thumbs when you have large areas to finesse. With the planes it’s a question of keeping one for the very final strokes set fine and kept pristinely sharp. 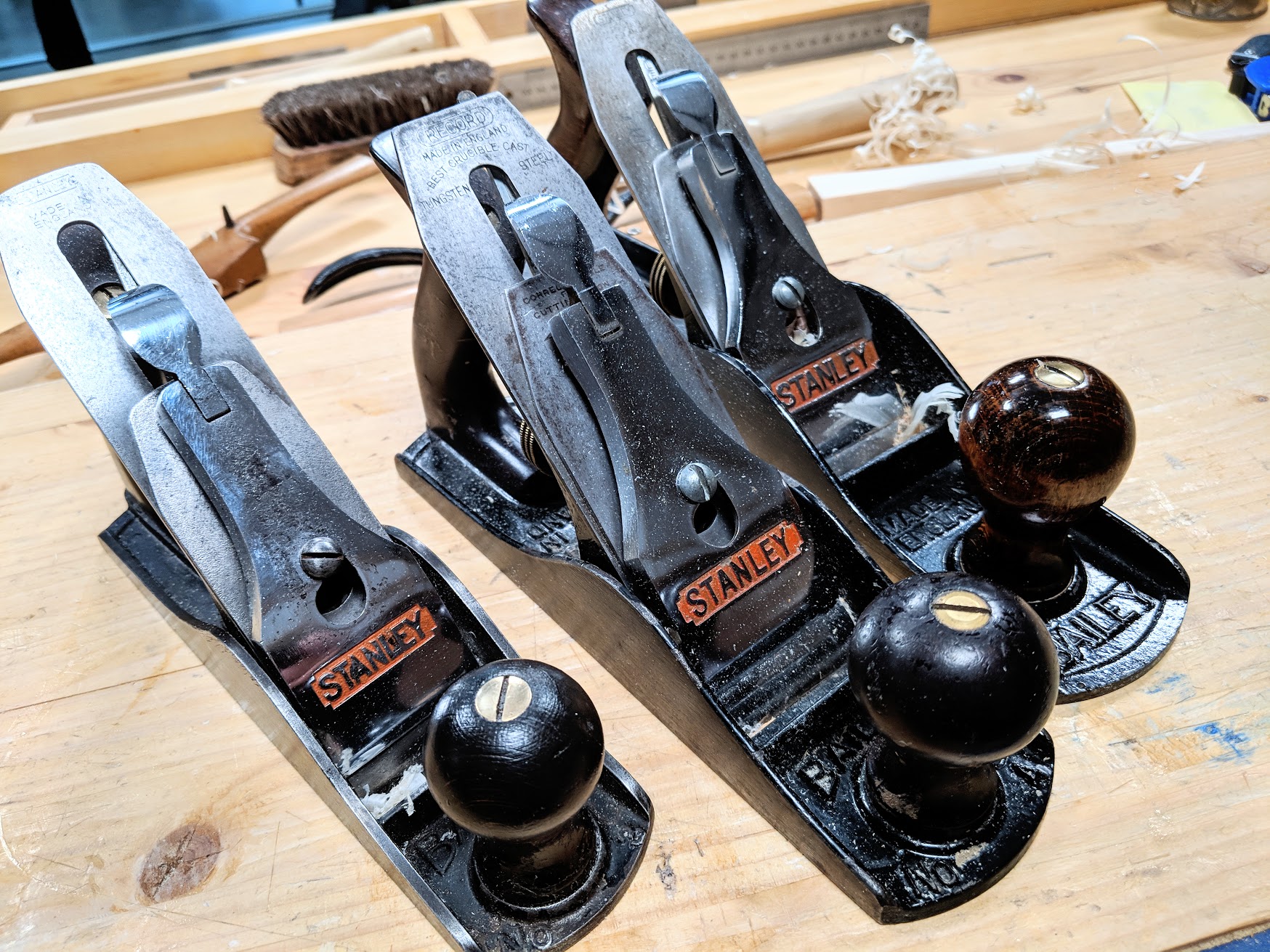 The planes may be both number 4s or a combo of 3 and 4 or 4 and 5, my call, and planes chosen according to wood type, size of surface and so on. With one plane finely set, the smoother, the second is more coarsely set and may well be sharpened to a lower level of sharpness, perhaps only 250 grit. Try it. You’ll be surprised how well it cuts. This I call ‘step refining’. Switching in steps and stages means I sharpen two or more tools at the same break and get back to task for longer periods of refining work. 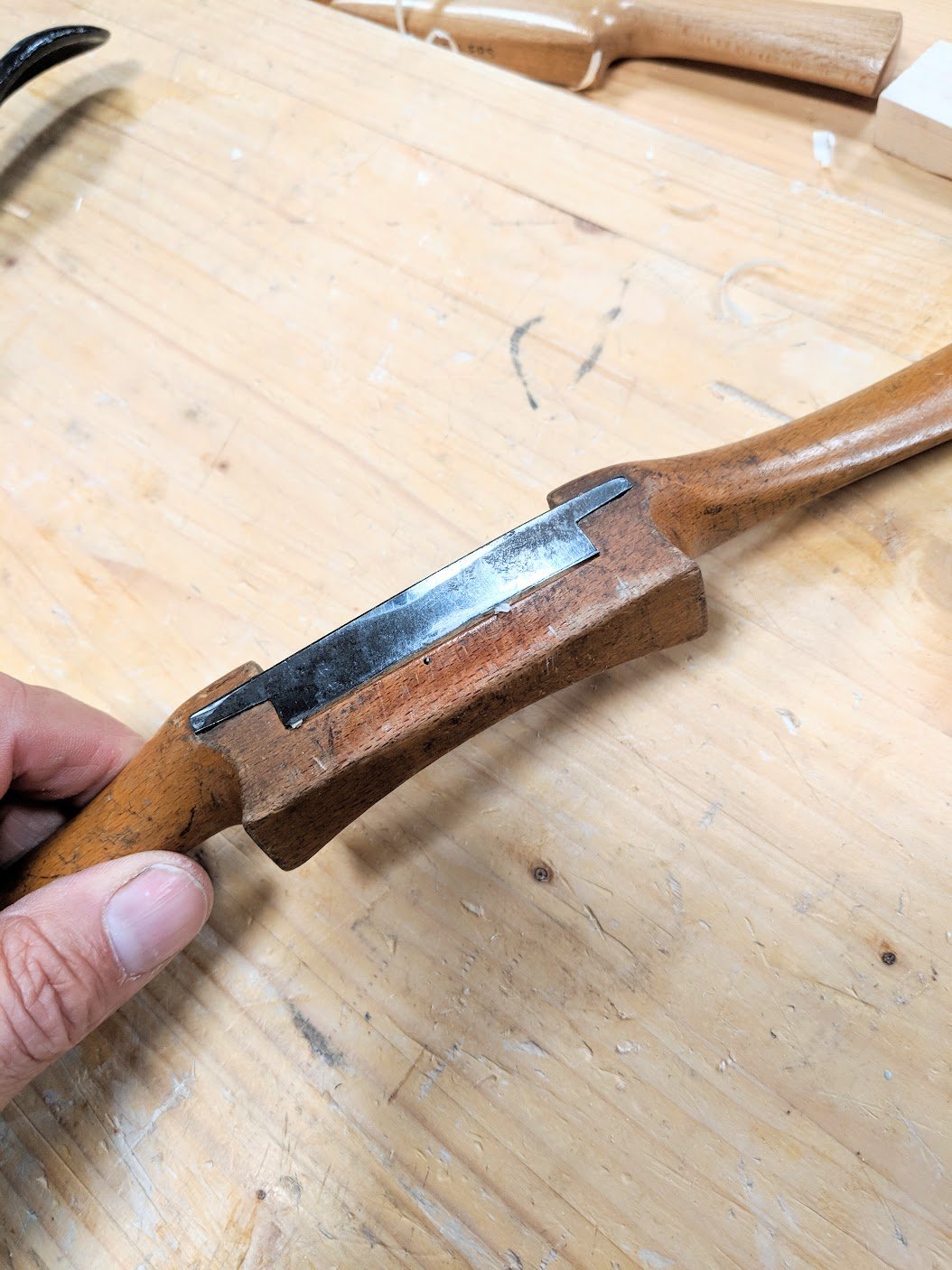 The day before yesterday I picked up a few secondhand tools from a local charity shop that seemed very charitable. I bought ten pieces for £4.50 and that included the wooden spokeshave I sharpened and used throughout the current project. Here’s the thing. This spokeshave is made from beech, the single most commonly used wood for planes and spokeshaves. It’s a resilient wood, strong and durable, easy to work and shape with other hand tools. This one was made by James Howarth of tool making fame in the former Sheffield of old. I could never guess at how many they made but it such a very good plane type. Of course you may want to make your own and we did make an adjustable type last year so you could make one yourself by going here. 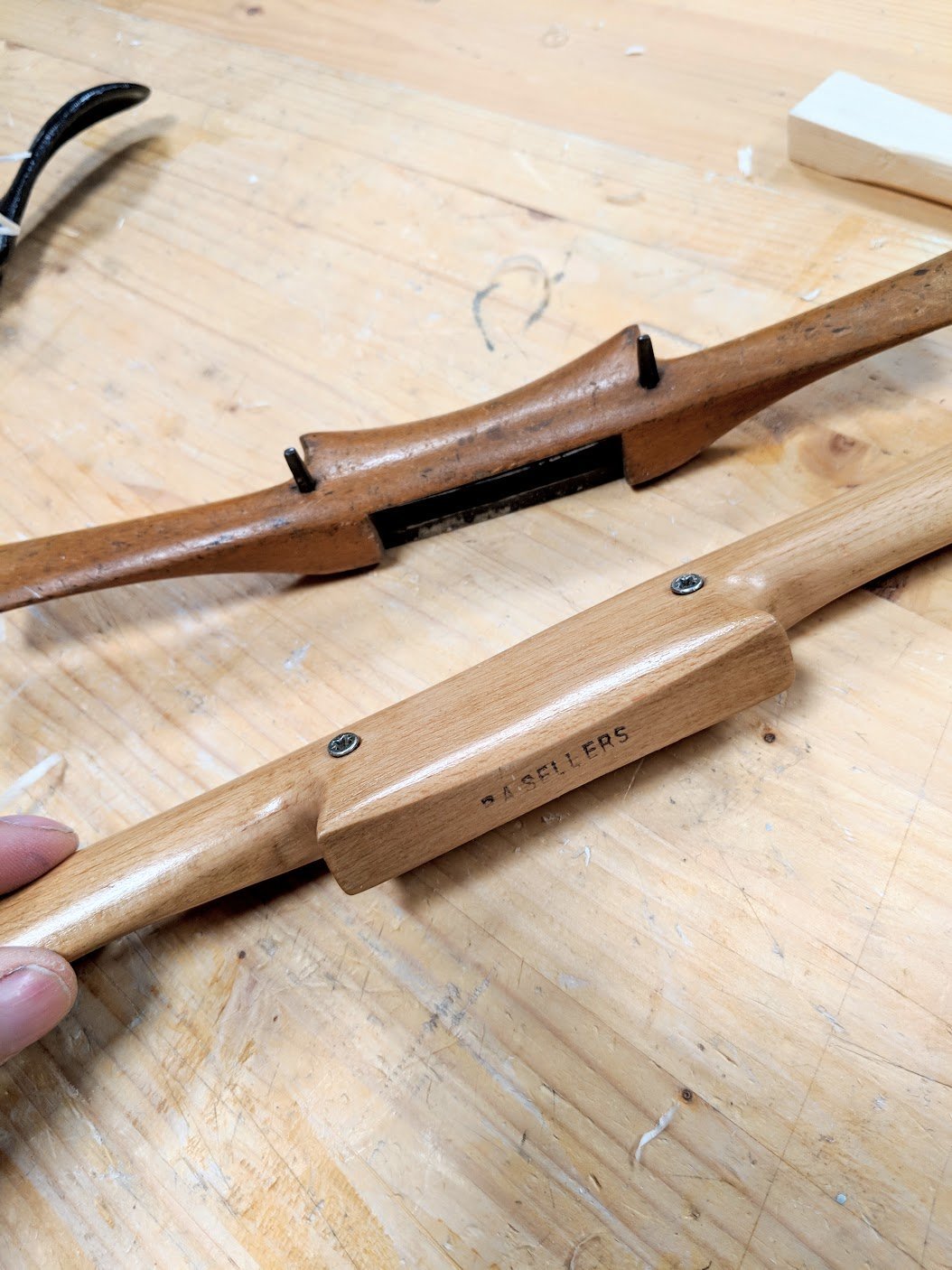 The thing I looked for was wear on the wood just before the blade where it meets the wooden forepart. Then I look at the blade itself to see if it has been abused by some previous user ramming it into unsuited material containing grit or even nails. There was very little wear to this either. Two obvious worm holes in the wood that’s all. It took me  few minutes to sharpen up. Oh, the other thing to look for is the tightness of the tangs in the square and tapered tang holes. It was nice and tight with no signs of rusting between the wood and the tangs. Rust usually indicates fusion twixt the two elements and when tapping the tangs to loosen the blade, breakage often occurs in the wood or even sometimes the steel across the blade. Loading the blade and peeling off the first shavings was magic. There is no other sensation like a wooden spokeshave where the blade is the sole of the plane and all seems so frictionless, light and effortless. 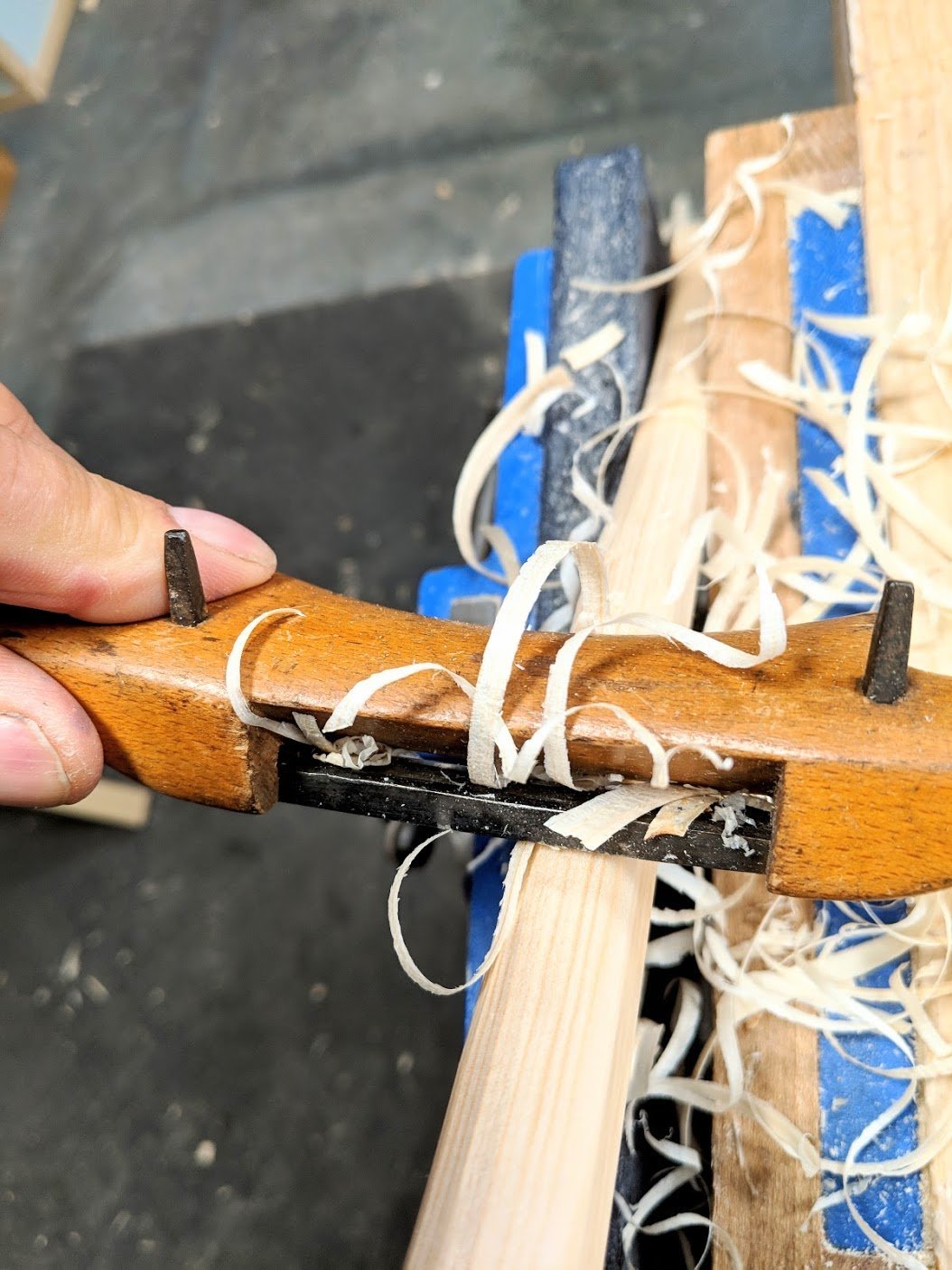 In truth I am often asked whether these ‘vintage spokeshaves’ are worth having. In my view they of course are. There is nothing like them. For spindles they cut both green and dry wood like a hot knife through butter. But in my view there is still something to the basic #151 running right alongside the wooden versions. Sometimes I follow the wooden ones because there are times when a wooden one can leave something reminiscent of a washboard surface. This skip-jumping  is often erroneously named chatter but of course it’s not chatter at all. On my current project there can be no doubt that the wooden one hogs of wood to a chamfer 1/4 wide in just three or four strokes. By using the bevel down #151 spokeshave I can refine the surface to perfection in two extra shallow strokes.  From there  I am ready to sand and apply finish with only hand sanding alone at 250. 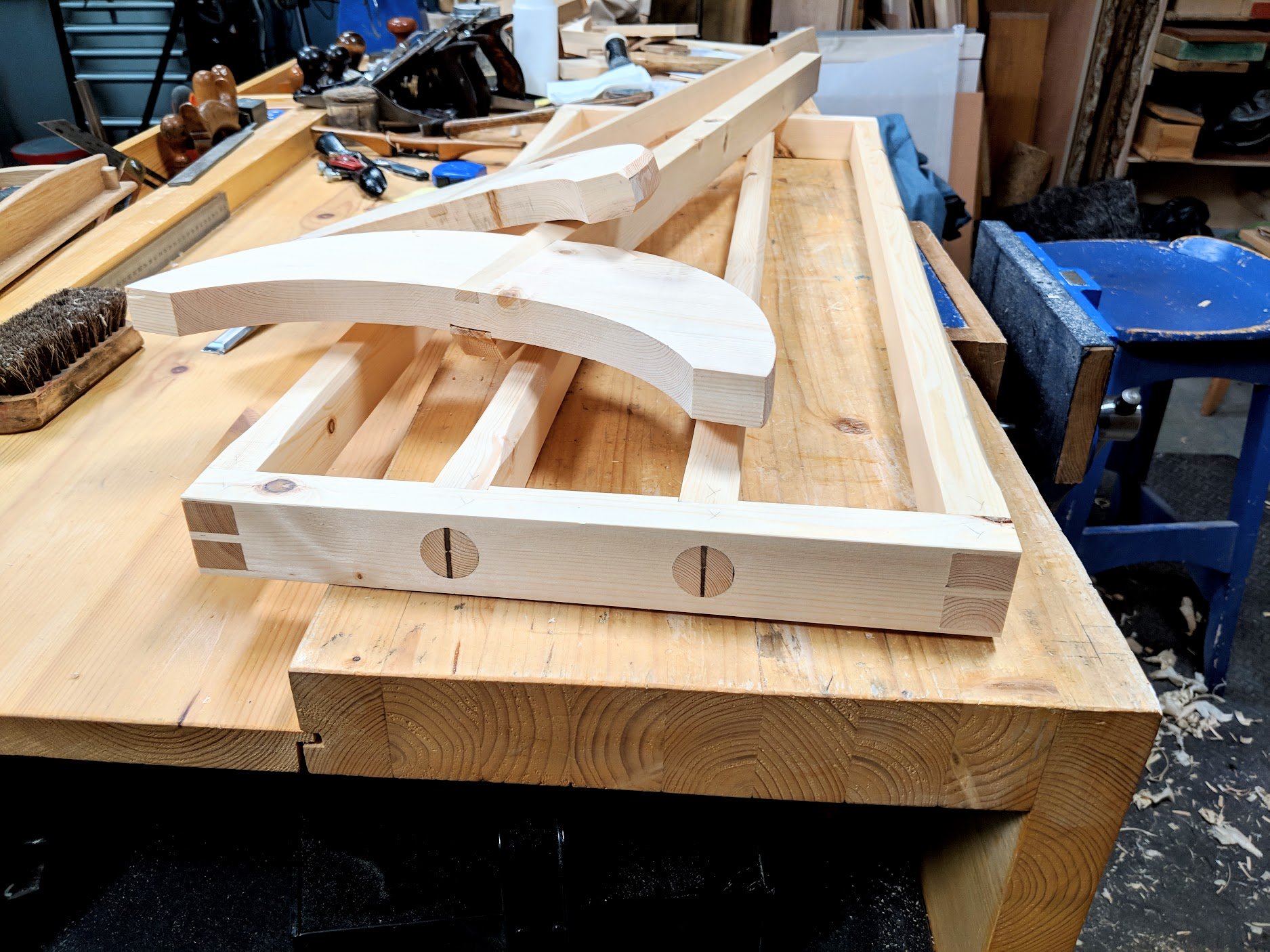