I hear how others express this or that about the using of hand planes. It’s as if there is but one way to hold the plane, one height at which to plane, one angle at which to plane, and so on and so forth. I’m sure there are as many ways to hold a plane as there are woods to plane. Many skew the plane to get a slicing cut because they were told that that was the the way to present the plane and that you must do it that way to get the plane to cut. It’s surprising how many things are passed down that way and become law. Mostly the plane is presented in response to what’s felt in the wood. We must be able to flex midstroke and adjust our attitude as we negotiate they right path by what we feel minute by minute. Knowing what to do takes time to understand over a number of months and years. It’s good not to pursue a one way approach because most craft work is about flex not rigidity and legalism. In my view it’s more about something called suppleness you see. Keep supple. 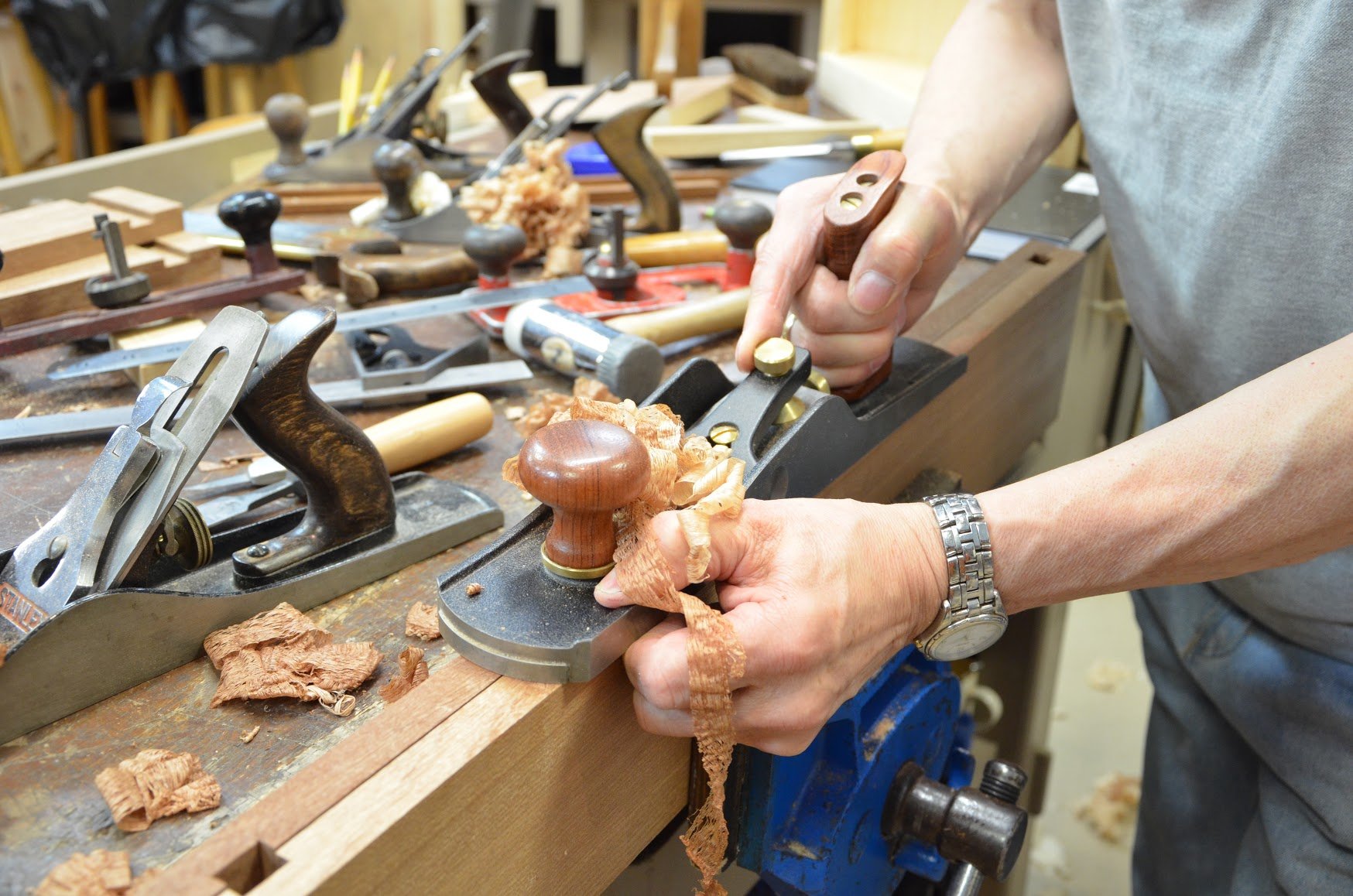 Some say that apron clamping is a must for getting straight edges trued and others say the plane sole is the guarantee to straight edges.That’s far from true. It’s about flex and suppleness, sharpness and sensitivity. Whenever you create a fist you are ready for a fight. You lose sensitivity. Believe me, I know these things. As an apprentice with masters they never trued their soles on dead flat diamond plates or glass plates with stuck-on abrasive. They trued their wood intuitively, squared edges to dead ninety and edge jointed two long edges in the vise with no bench dogs, holdfasts or continuous bench edges to clamp to. These men were non-obsessives in a non-obsessive culture of real-world woodworkers. There was no such thing as studio furniture yet many a fine design came from the workshops of people who were unpretentious in their making. People like Edward Barnsley, a well known English maker who designed and made and lived his life as a pure maker. I’m glad i was exposed to the reality that the men I worked with wrought into the inner fibre of my life. There were no plane socks, thick irons in cast steel bench planes and yet every surface got planed with unrusted and trusted planes with ordinary thin irons. It was true and pure genius for me to watch them because as I have grown older this reality remains: woodworking is the crafting of the artisan in every dimension. It’s unpretentious to see a man and now a woman emerge with realness. I have watched this with each of the dozens of apprentices I have trained through the decades and years and now, in Hannah, I see it in the first woman apprentice I have had. Not because I chose not to before now, but that she was the first one to ask me to. This sad reality is a condition of society. There are in my view too few women entering the realms of woodworking. I am not sure it will change much in my lifetime. I am sure it’s mostly to do with perception. Most people think woodworking is site carpentry. In reality it’s mostly nothing to do with site carpentry because site carpentry has very little to do with woodworking. Chop sawing dimension wood and nailing and screwing cuts together is processing assembly. Not much to it in this present day and age. 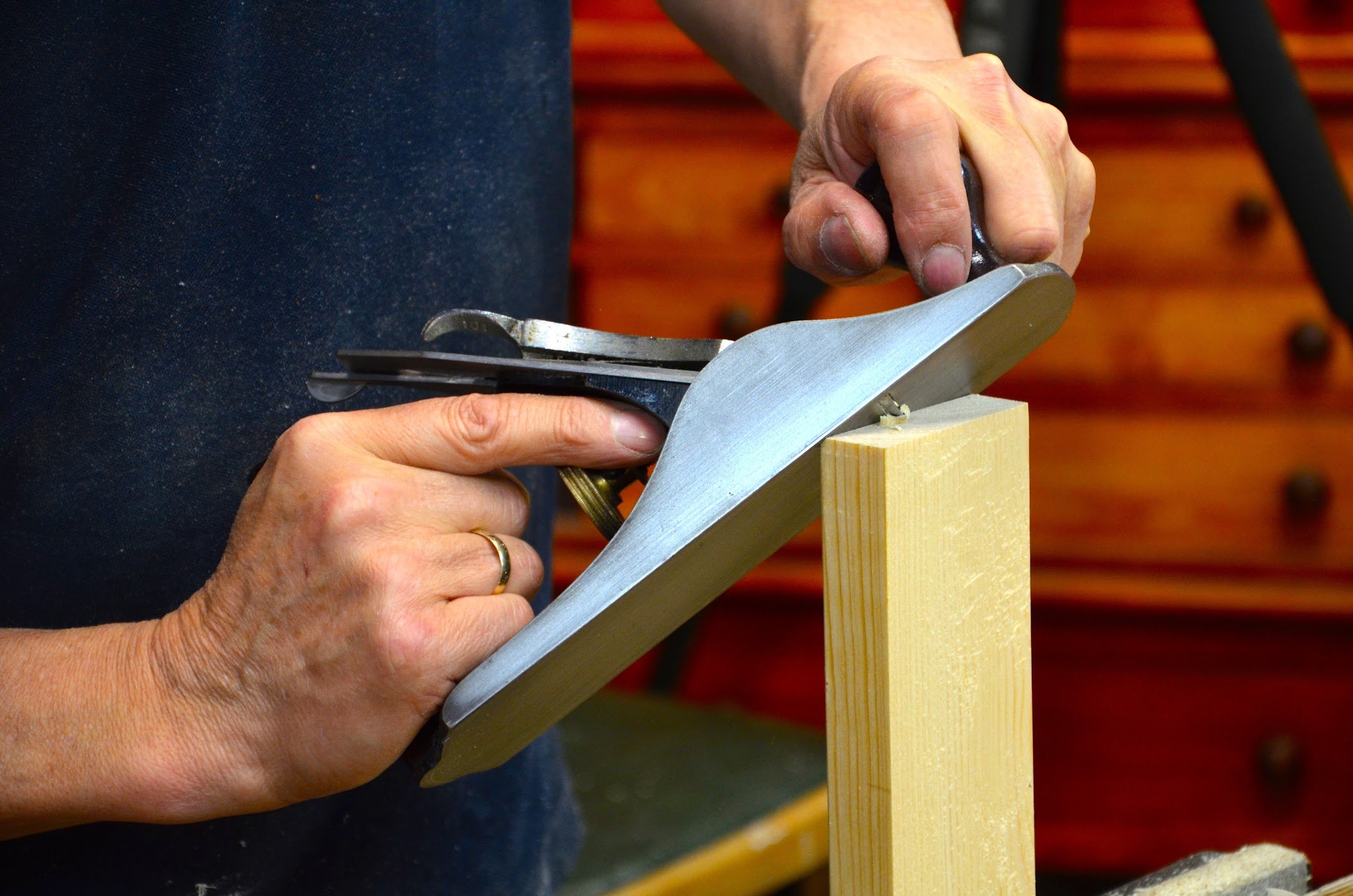 So realness is for me a most remarkable thing. It’s unpretentious living in work. Realness. When I see it happening over a number of weeks and months and years I am amazed by seeing skill change people’s lives. I am amazed that unremarkable things become the things I speak of all the more. 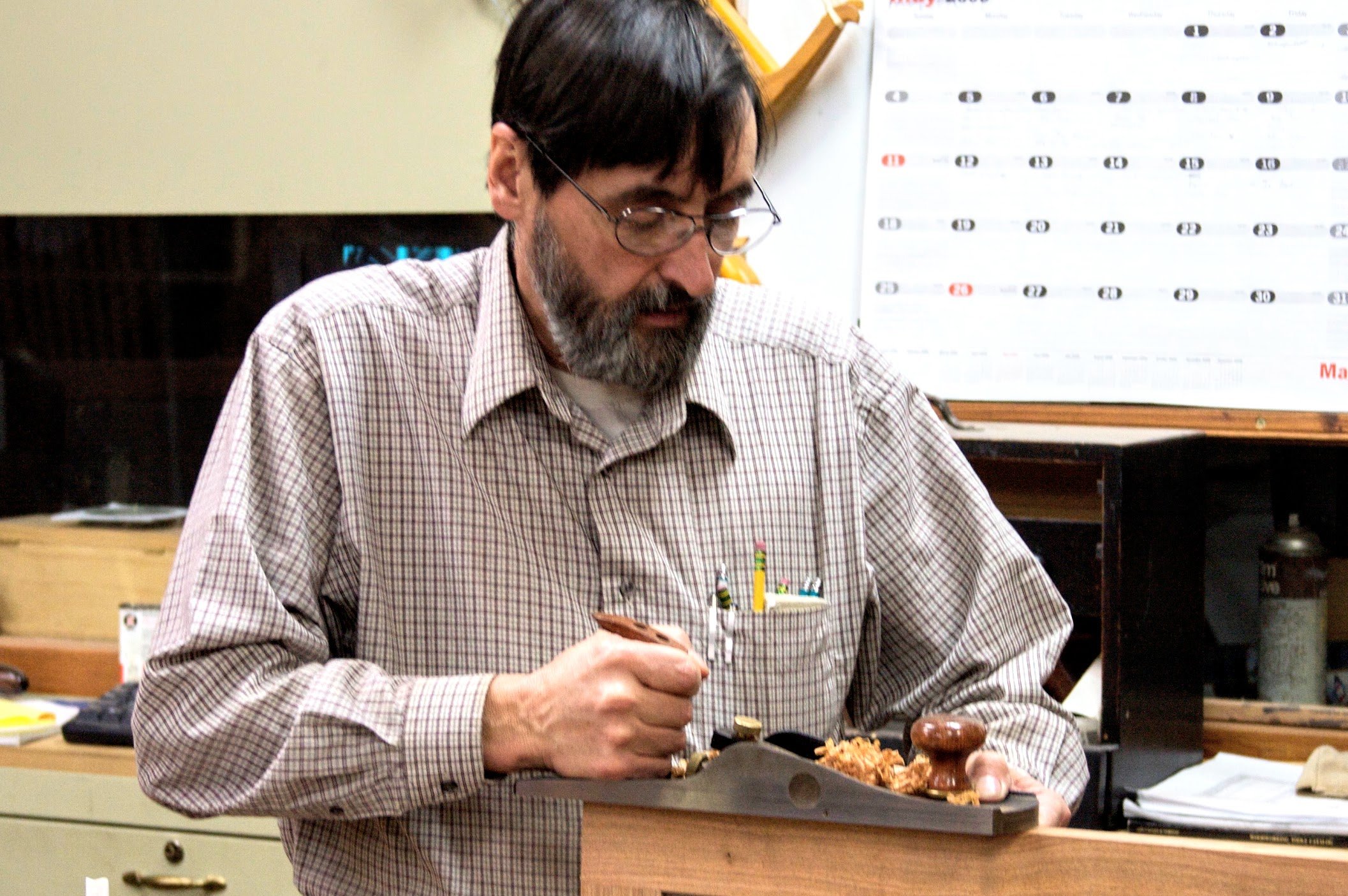 Back to my experience with planes. I know that the men I trained with owned long planes but I never actually saw them use them. Everything they did was using a smoother and a jack. Flattening, straightening and squaring seemed so intrinsic to them and they effortlessly square edges and fitted parts like doors and drawers with a dexterity I frankly no longer see even in isolated pockets. I am hoping that people will regain what’s been lost. I live in hope and do what I do because i do in fact have hope for the future. It wasn’t accidental for me to become a craftsman capable of confidently truing stock almost without thinking, it was my pursuit of perfection and an ideal. Somehow these elderly men knew, as I do now, when something was out. We use methods in our truing of wood that mostly defy words. They’re unspoken. We work, the plane squares and we have trued surfaces squarely adjacent to one another in a few strokes. It’s in the doing of such that we understand and by and in that we become experts by the experienced. Never underestimate the power of real mastery with hand tools. never expect to at some point be qualified. There are far too many professionals feeling qualified by bits of paper. The qualification we strive for in excellence always defies paper certificates and too many ‘qualified’ ‘experts‘ are very unqualified. The problem is, in my view, there is nothing there to disqualify them. 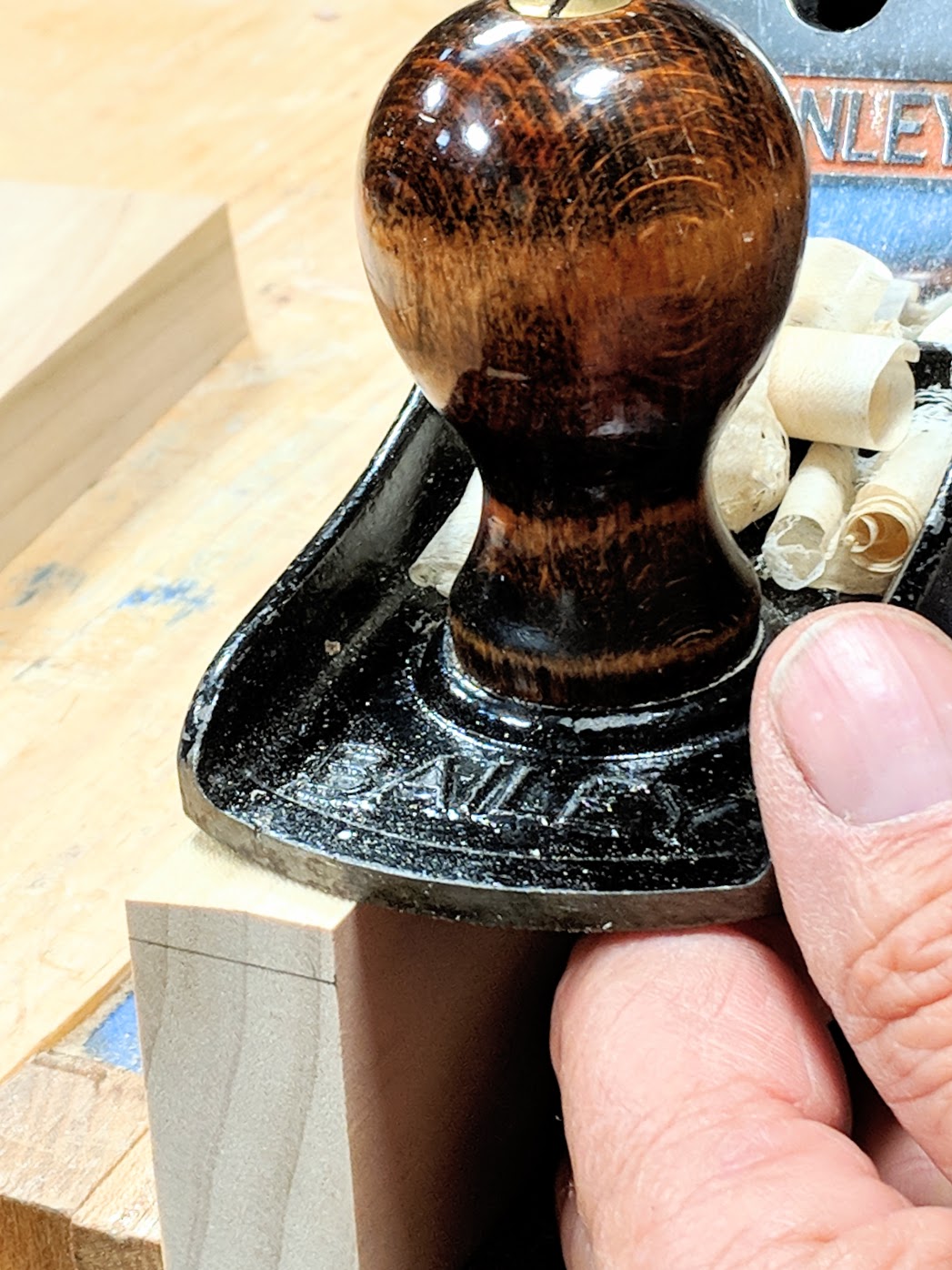 I have shown you a few of my hand positions. I use them all the time every day and change them second by second. To start out you may well start with the familiar fist-and-punch grip and movement, but that’ll change. Embrace this reality and you will short circuit the learning curve by your relaxation. There is nothing at all wrong with the fist-and-punch to start out, but I hope I can persuade you to question authority and relax into other options as shown. In the long run you will become your own authority as did the craftsmen before you. They adapted and adopted and led me that way through those opening years of my experiencing the plane. You will settle into hand positions one by one as and when you develop the sensitivities of the hand plane, the wood and the execution of the work. The video I have on the way to show you will help you. It is just the beginning. If you are like me you will develop additional positions to work with.The styles and techniques will be yours to own. Try the ones shown in Part II of this series for yourself and put the ability in your hopper to draw on in the next project you make. Each hand hold will take development. You can do it! 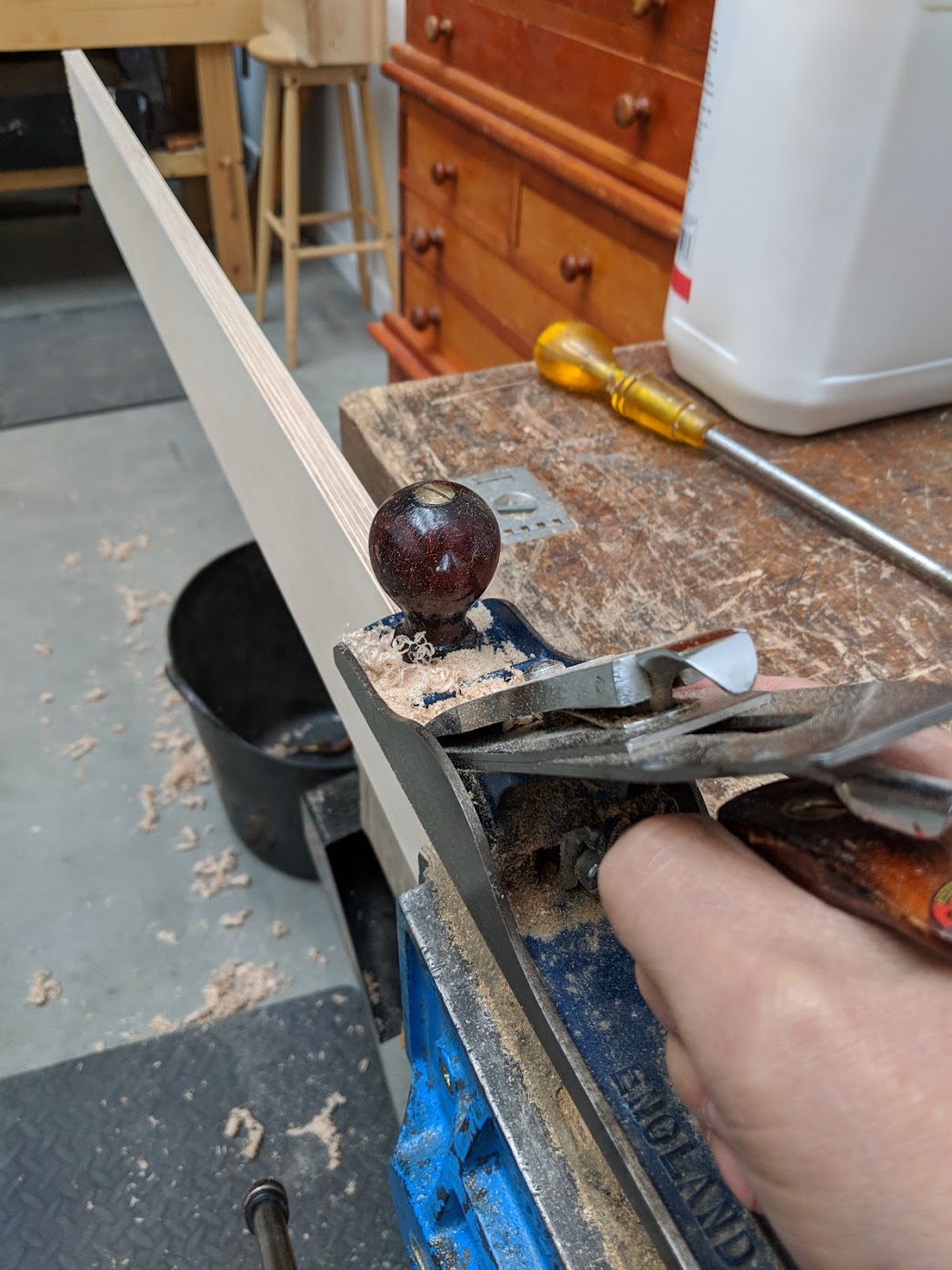 It’s a funny thing, the silliness I hear about overhead, upper-body bearing-down planing from above. You see if you have nothing to compare to you might accept such lack of common sense stating as some kind of dark arts wisdom. Self experimentation, trial and error, will prove quite different over the long term. Whereas minor experts of an unknown background have crept in on a global scale to expound on woodworking, this was only possible because of the dearth within a dying sphere left vacant over three and four decades. I think that mostly you all may know more than they do, you just might not believe it. Lots of so called expert woodworkers I have come to know through the years lived their former lives selling planes and they have become the modern day experts. But watching them handle a plane is plane painful sometimes—dispiriting even. They never really learned to relax into it. 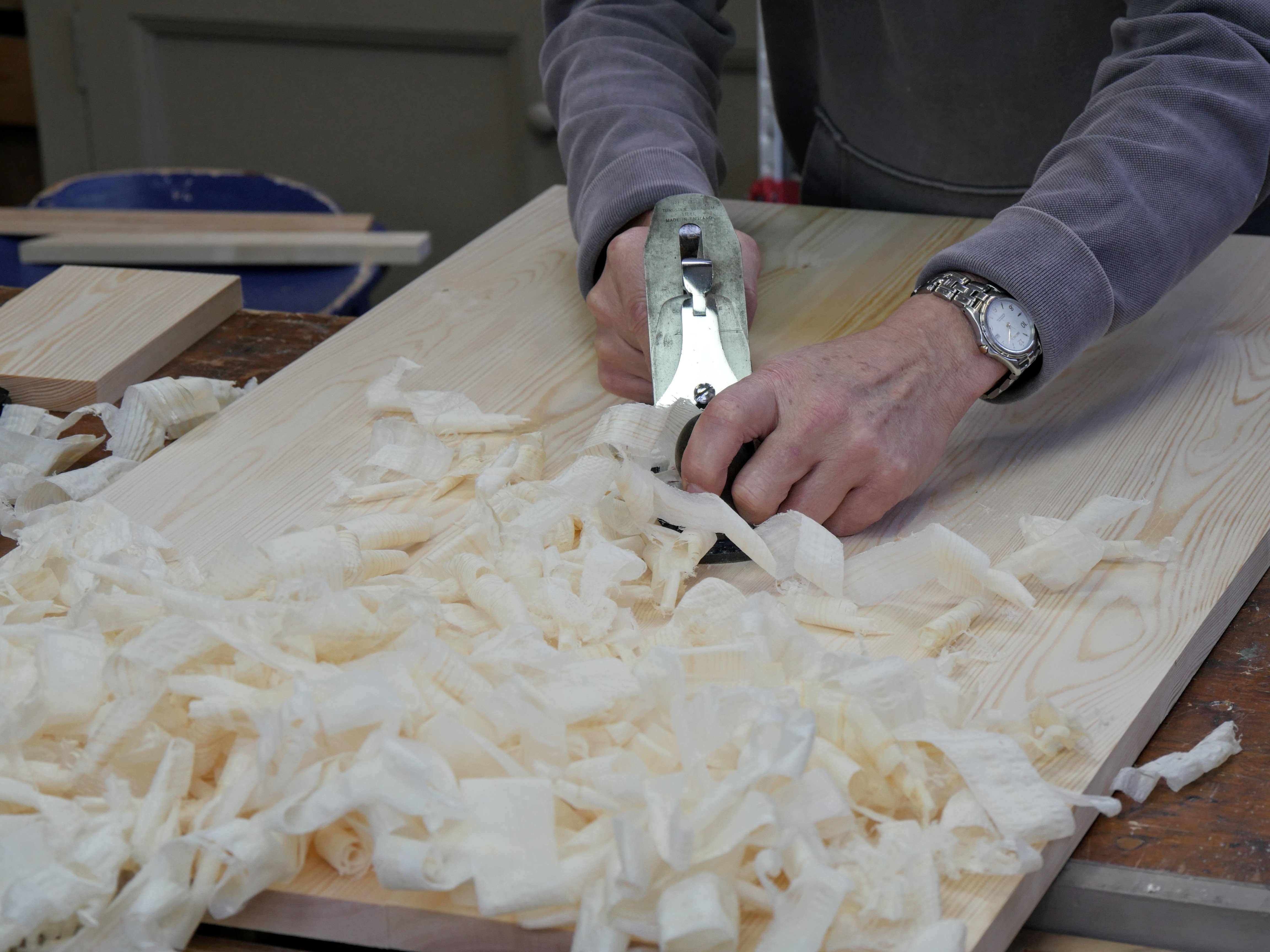 The plane posted on the sides of carpenter’s vans and trucks mostly depict the clenched fist and punch grip. It’s that macho-man thing raising its ugly head again. The plane hands have many positions fore and aft to the plane. Four fingers and an opposing thumb wrapped around the rear tote and then so too the front knob. My experience is that full fist grips at the fore end of the plane often result in rapped knuckles twixt wood end and fore part of the knob. After some early learning and a little gentle nudging from George I learned to be decisive and fully aware about how to place my forehand. To be looser in the grip, to be flexible and easier. Sometimes, quite often, my hands opt for ten different positions in my planing a rough board to smoothness and trueness. My mentors did the same as did theirs. These are the men to look out for if you can find them. They have something of substance and they earned it by decades of hard work without any more than an apprenticeship and a six day week. Most of these men had put 15,000 hours in at the bench by the time they were 21 years old. But the new generation of woodworkers is emerging with a different mindset. There are so many genuine woodworkers who just love woodworking and they do it in spite of the lack of mentoring. These are the special ones. They spend time in the quiet of sheds with low light and non-specialist equipment. They do it without pay for a few years and nothing stops them, especially not having the right wood or machines or money to buy with.

16 thoughts on “Seeing the Art in Hand Planing—Part III”