…Once upon a time…

…when I looked back to an era knowing that hand planes and saws, chisels, draw knives, braces, things such as that, were more artistically and creatively created by what might have been called artificers using their hands to make, I was pulled into thinking to myself, ‘What happened?‘. Fact is, that that pinnacle era of hand work and design was never repeated. Mostly design was dumbed down to what comes easily off a machine. That’s what machines and CNC efforts have reduced creativity and life art to. The era when all men and women fashioned the needs of life by hand and no one referred to themselves as particularly special was an era of humility because their making was, well, quite the ordinary thing to do. Everyone but everyone made. It was a taken-for-granted thing that people did, everywhere, make things. Today an engineer sets up a factory, large and small, buys in some programable milling equipment to manufacture parts for him to assemble on a production line and we give them credit for copying things that mostly already existed a century or two before they were born. 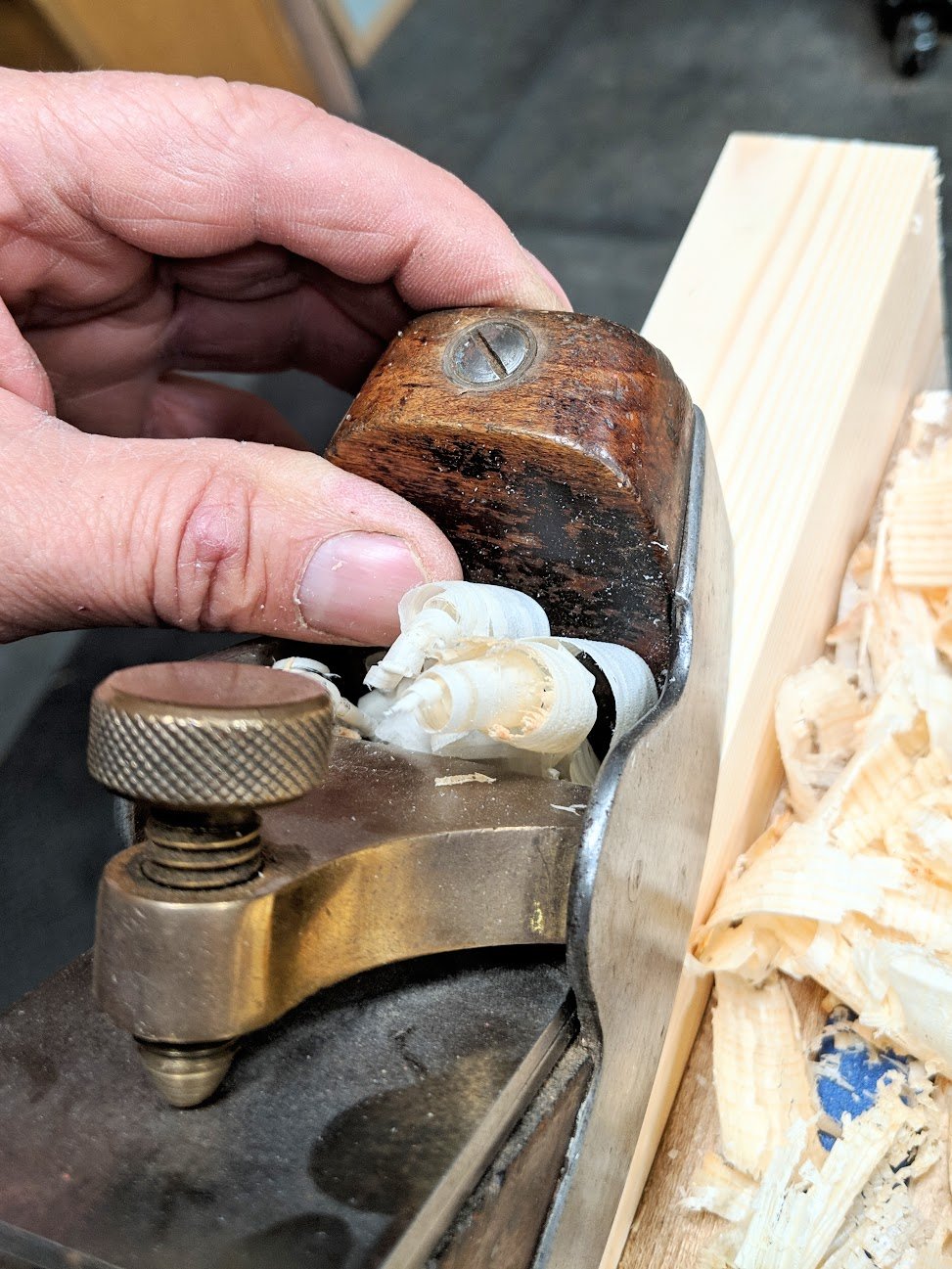 In its day this Norris plane was new and innovative, mostly because of its combined depth adjustment with lateral adjustability in a single stem. lee Valley Veritas copied the mechanism for all of their planes.

I’d love to see something new, not pure knock-offs stolen from 150 years ago. I suppose in my sphere I am talking planes and saws and such. I associate better with these. I often wonder why new things such as tools rarely if ever emerge from an era when everyone has a degree in one thing or another. With nothing new coming in we face an era of total and boring sterility. Could it be because the era of effort and survival no longer drives progress and the inventors prefer safe living? Or is it because no one can better what we’ve already invented. At one time tasks were hand tasks and good handwork and design was critical to a man’s reputation. The inventor developed skills and found others with skills to progress ideas. Survival of the fittest if you will! There were of course no CNC routers suspended from platens routing out shapes for a zillion saw handles. Handles  identically pumped out with that look-alike clunkiness mass-making leaves us with. A man came to my walking cane business and said he could sell me a machine that would make a 38″ dowel in any wood ever two seconds. I said what will I do with thirty sticks a minute? He said as long as you load the machine by hand you can still call them hand made. Most walking canes today have plastic stick on handles and tips. They are all made in Asia and today can buy the same cane in China, Australia, New York and London and all ports in between. Nothing new. 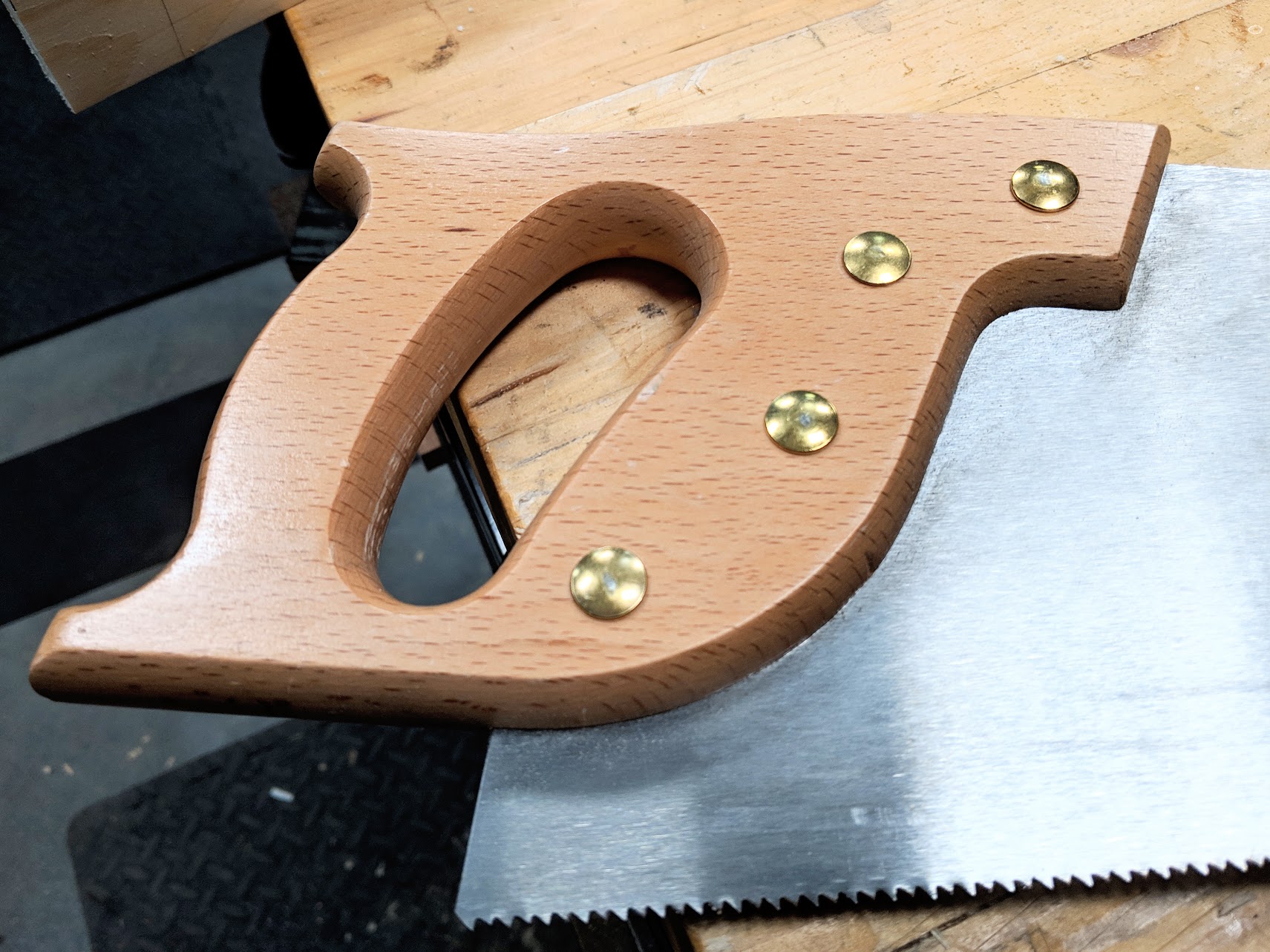 This saw works exceptionally well. As well as the very best made. With juts a little thought and about 10 minutes work on the handle it would have no competition.

Funny though, with all of our post modern contrivances we have yet to come close to matching the standards accomplished by men of old using mere hand skills and hand tools they sharpened and honed themselves at the workbench. Plane makers and saw makers, tool makers generally, most of them, not quite all, seem more to have become assemblers of component parts along a conveyor now. This Henry-Ford-production-line demoralised people, of course it did.  There is not much art to this type of working; if any at all. I know a man with a masters in engineering that sits at a polishing sharpener all day long sharpening carving sets on a series of buffing wheels. It’s quite skilled but takes only minutes to become masterful. No degree was needed, but he’s contented to do that now and forever. 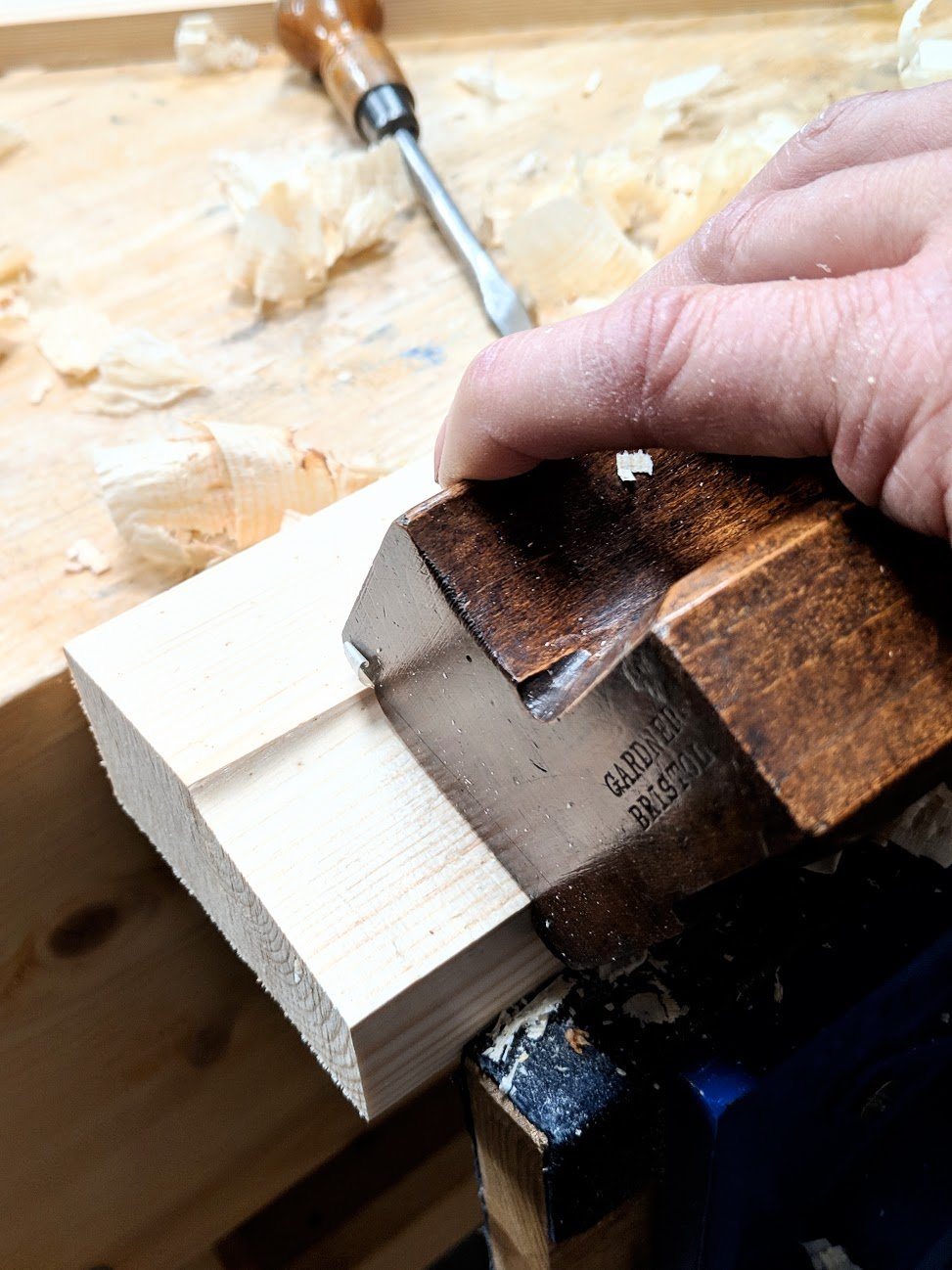 A panel raising plane like this was innovative too. Beautiful to use and leaves a finish that needs no sanding when done. A man with vision made it in his day.

That doesn’t mean that the output from such mini and maxi factories doesn’t look nice or feel good. More that it is kind of soulless I suppose. More that what they make has that certain hallmark of sterile, samey sameness, that’s all. I know it is true that they couldn’t compete using hand methods in an era of mass making, and I am not lamenting those ‘olden days‘ at all, more questioning why, with all of the technologies now available, we haven’t actually come up with anything quite new and distinctive—innovative even. And of course I am not talking about handles made from pouring casting resins into silicon moulds or composite plastics and such. Not much to those things at all. Reminds me of people running grooves with a router and pouring epoxy laden with powdered turquoise and calling it inlaying. Not art at all. I guess such things wouldn’t impress me. 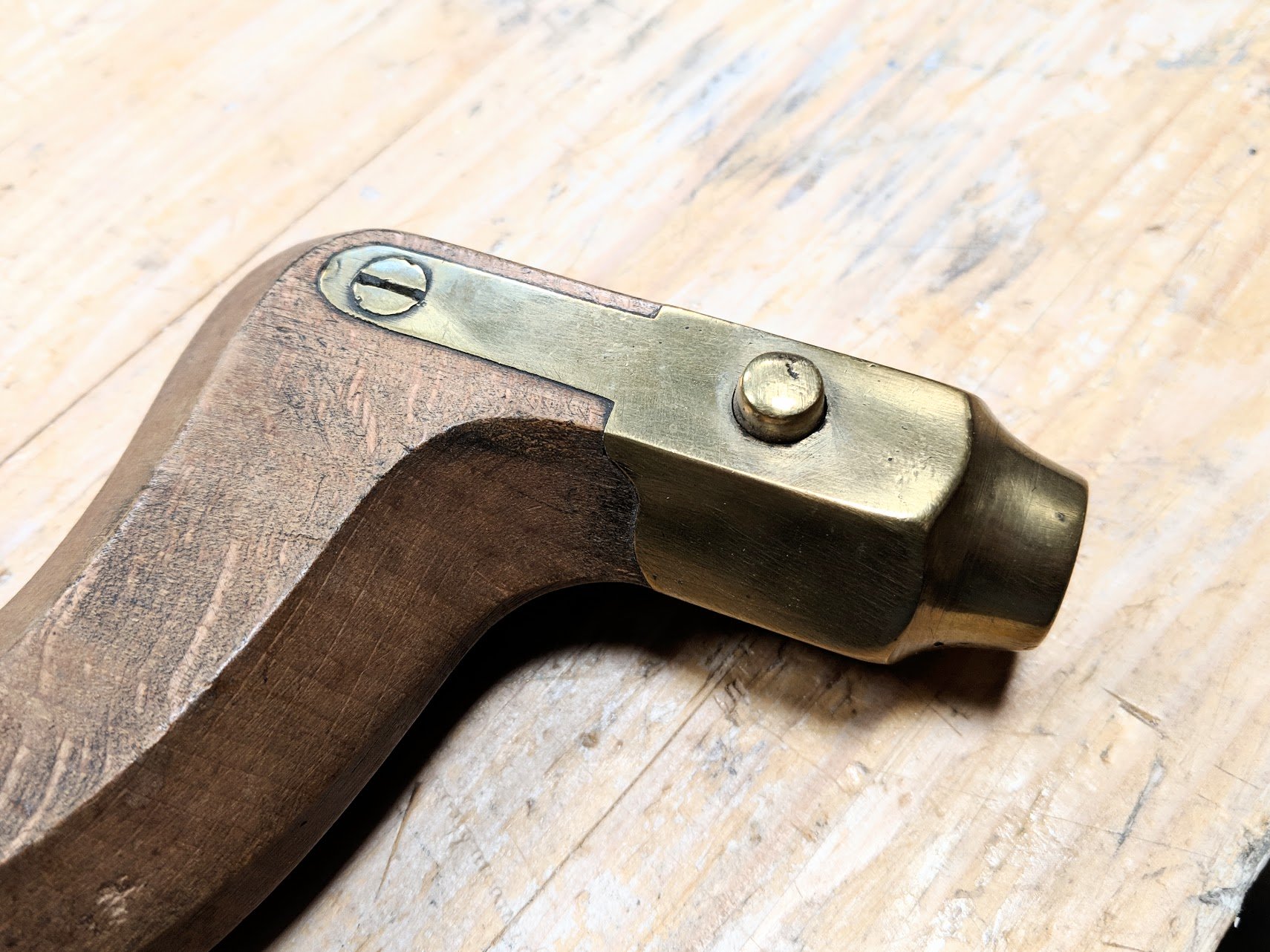 A brace made of beech. Not fancy, but the chuck has a button and you press it to lock the bit ion place.

It seems to me at least that all that’s happened is the constant acceleration to the fastest finishing line, the main product of consumerism. Whether you believe in global warming and climate change or not, the reality is that we are about to live with shifts resulting directly from greed and consumerism. The Industrial Revolution has not been without excessive waste in incalculable ways. Where some producers manufacture the worst quality goods, others produce the best, There seems to be this massive margin that no one seems willing to occupy apart from through the importation of mass made knock offs. I believe this is more about an unwillingness to take risk than anything else. A router plane and a saw, a hammer, a knife or even a decent plane can only cost a fraction of the selling cost. £220 plus for one quite regular handsaw compared to £25 for another that works equally as well tells me that it has to be more than just low labour costs. I know that without the US market all the tool making in England (and most likely Europe too) would disappear over night. So I’m not altogether sure where the entrepreneurs are these days. At one time the entrepreneur invented, designed, went out on the limb for something believed in. I wonder how Leonard Bailey felt when he made the invention a reality for all the planes Asia and the USA and England currently copies. Lee Valley Veritas in Canada has proven a consistent maker of innovative hand tools. Whereas reproduction tool makers copying Leonard Bailey designs and then western saw makers from the UK do produce  slicker, smoother copies, they are not new and innovative. 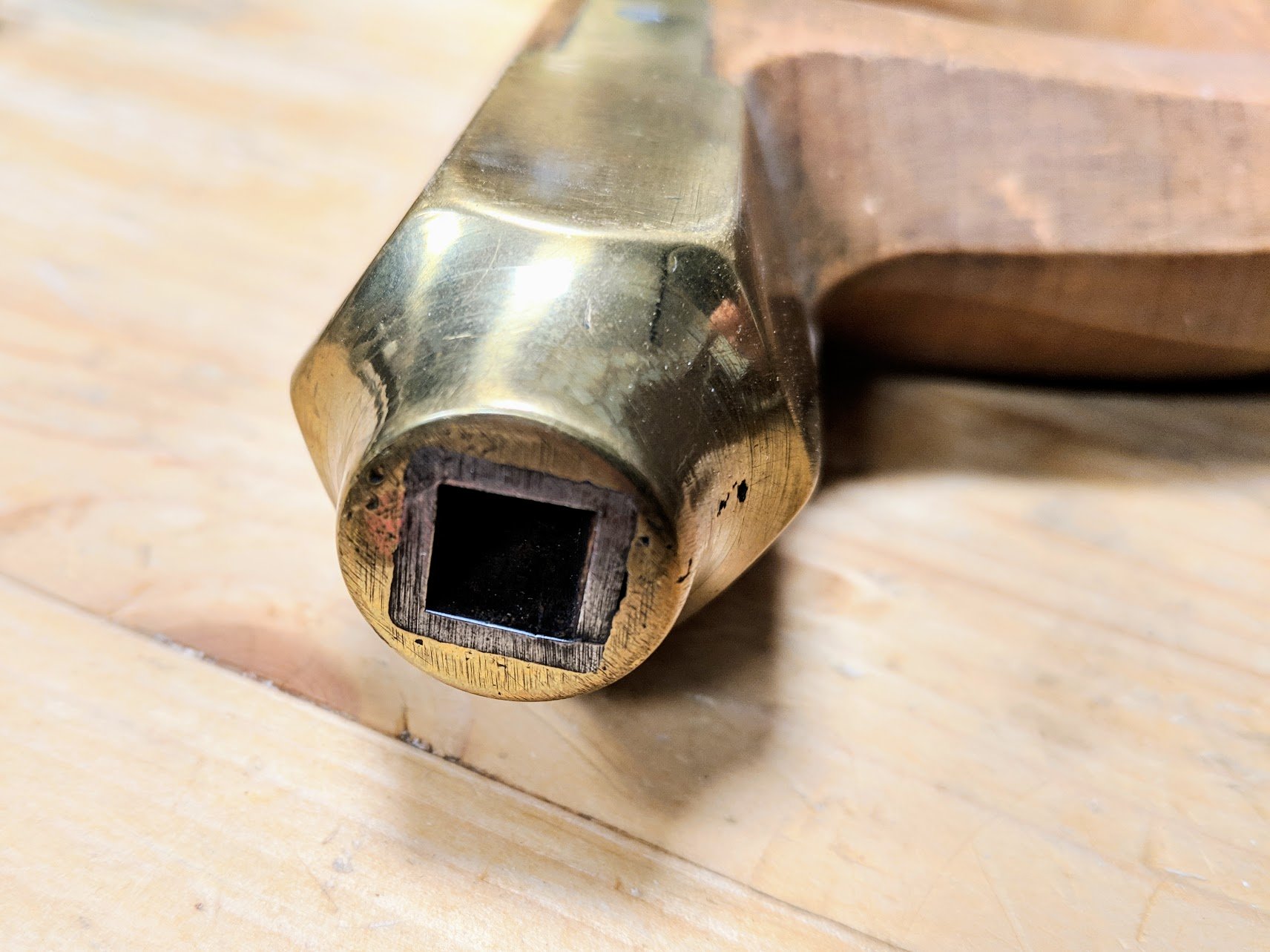 Reinforced, this brace receives different sized bits. It was innovation.

In times past, a century ago and more, artisans hammered out their beliefs into raw steel on an anvil. Men poured molten brass into forms in sand for casting into beauty. They made 30 planes in a few weeks, individually, yet they never called such beauties works of art for the work to them and all was work not art. When they worked the handles one by one with rasps and scrapers they felt them until they felt just right. Every edge was shaped by a man’s eye and hand, rounded by sensitivity, hollowed with a single gouge and a spoon bit in a wooden swing brace. Nothing was ‘cranked out‘. Things drilled and countersunk by hand set screw heads dead level. Metals were precisely dovetailed like wood and then peened into permanent union to form the sides and soles of planes. These makers, they had reputations at stake, were local, competitive with neighbours, they performed their art as makers of community standing. I think of a man taking planes to make planes as the individual output of his individuality as a maker of ‘playnes’. His work exemplified his whole life. I’d like to see such skill come back to us. The lost arts. When I consider  what we have come  to accept over the past century or so, today, in our quest for globalised consumerism, I wonder if something can’t be reversed. 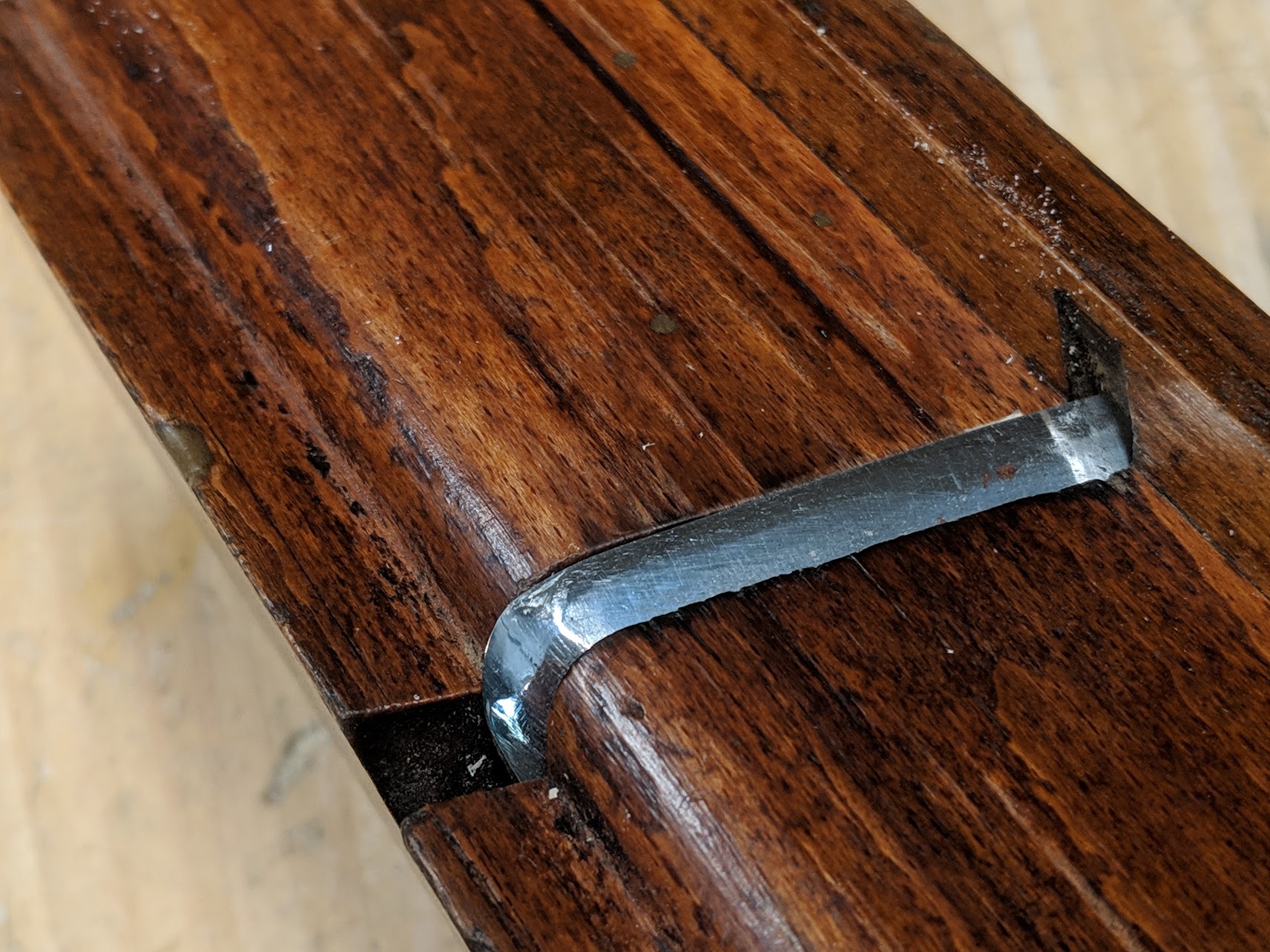 It takes a skilled man just an hour or so to make a decent saw handle by hand, a plane handle too. Turned knobs take 5 minutes max. Plate steel is rolled out, chopped and shaped into a saw by a mechanical tooth punch followed by a mechanical filer holding a saw file to exact angles. A saw plate appears in two minutes from such things. It’s the handle that makes the saw. Assembly is sliding studs through predrilled holes. Not complicated. 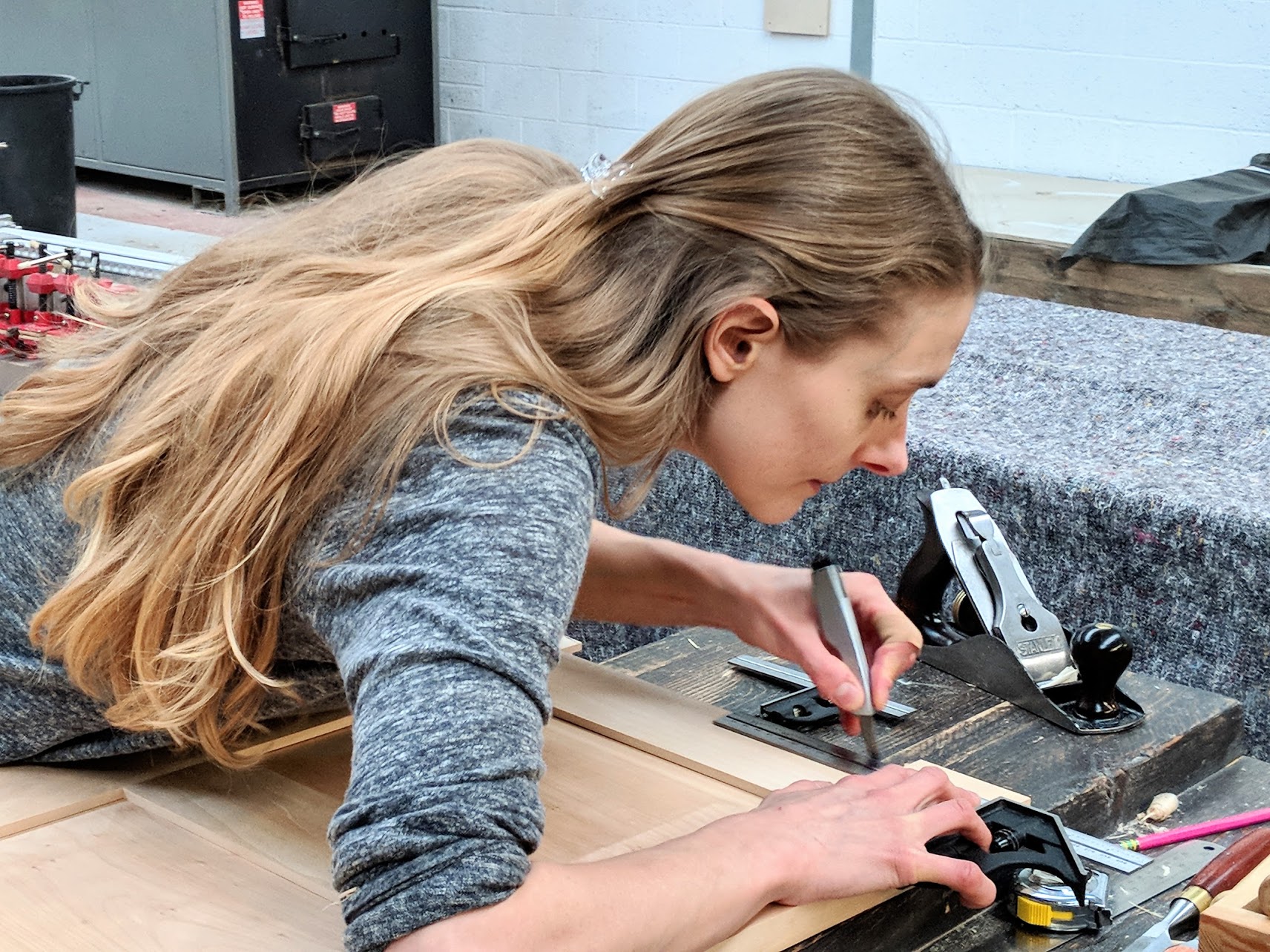 So, here in my work I feel a heightened excitement knowing that there is action taking place enabling a new generation and a new genre of woodworker is emerging as a direct result of our 3 decades of output. It’s a generation that sees the need inside themselves to develop and master skill and a generation prepared to work to that end. Inch by inch they’ve ventured out, turned a corner and are finding new and perhaps even untrod paths. They thought that they would never become skilled as a skilled artisans might be but they took a few first steps and found it wasn’t so bad to use a tenon saw and sharpen a plane. After a year, maybe two, three, four, the tasks they thought hard to begin with became a piece of cake. Are these the new entrepreneurs yet to be born? Are you one of the new entrepreneurs? I think so.

← Cognitive FeedbackNew Free Project For You →