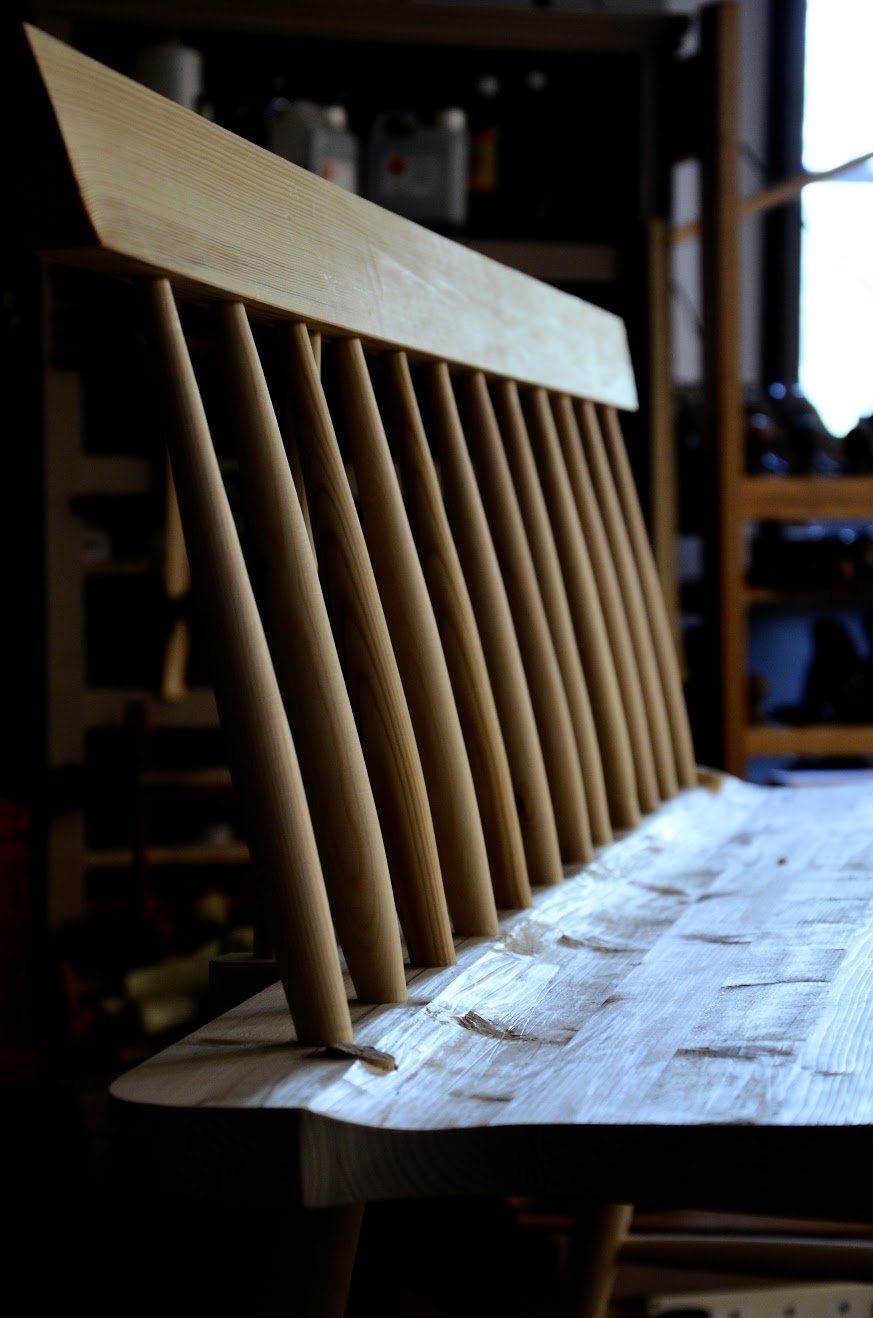 Were I to copy a Hepplewhite or a Shaker piece, say a woven chair with straight back legs and post and rung bored holes, a Windsor chair even and copy it from an existing antique, it would not be my design. I would just be taking off measurements and shaping components according to someones greater effort from the 1800s. The production time is much quicker as there is no experimentation. Not much thought goes into it so the design would have no or very little valid reason to charge for design. 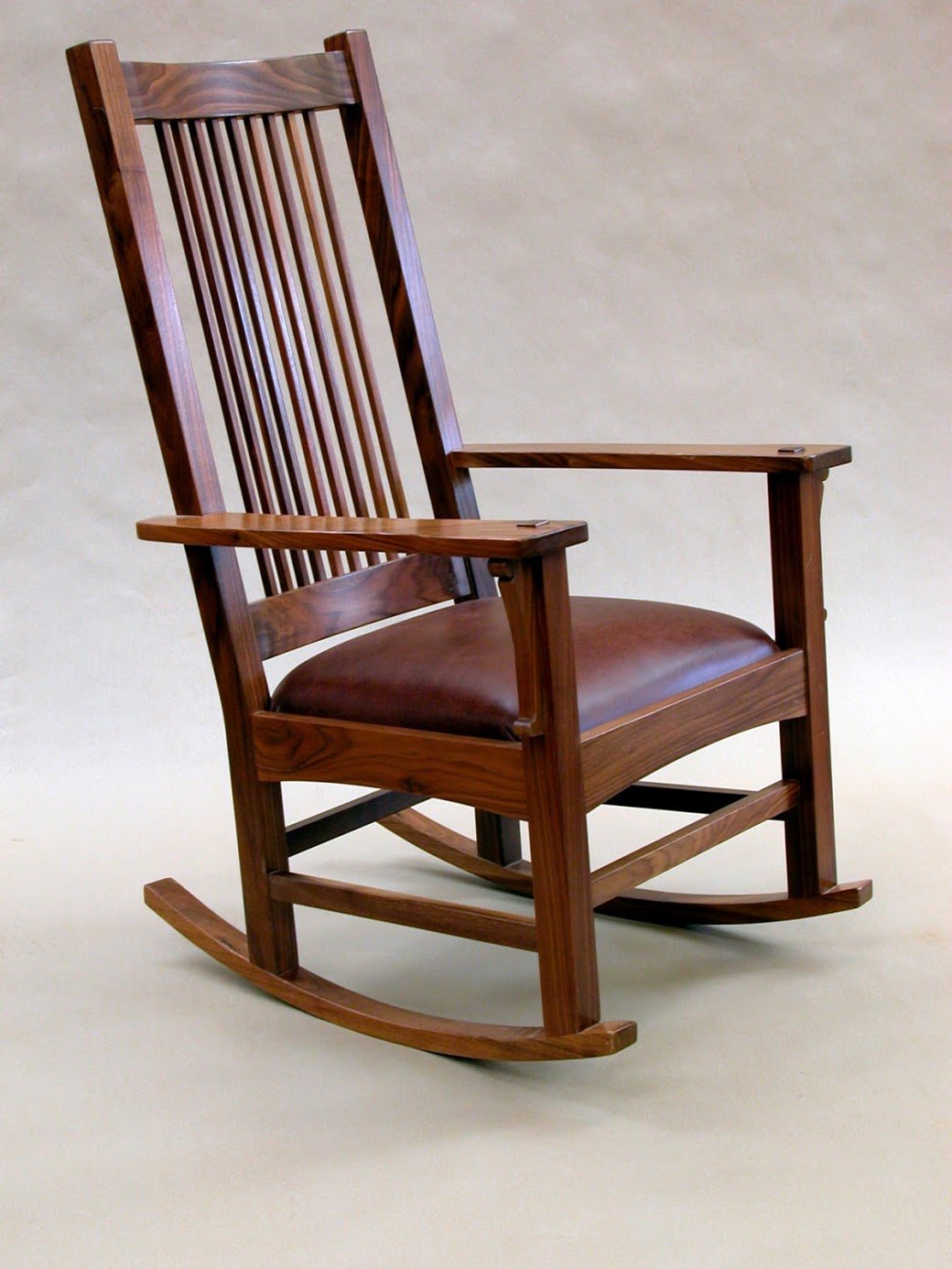 If in another scenario I do own a design and set up jigs and guides to continue production of the same piece over a number of years, say as with my Craftsman-style rocking chair where it was not so much a copy but Craftsman style inspired I would feel the design is less distinctively mine. Comparing the $6,500 rocker with the $2,500 rocker you can see that one will take a week or less to make and the other will take two weeks. But the design work took much longer on the distinctive rocker and that chair is indeed worth as much as people are willing to pay. This has nothing at all to do with fairness determining the price but fairness being what the design is actually worth. Were I to set up to make 20 Craftsman-style rockers in say oak, and I machined every part including the joinery, then the design still has value but designing then has more to do with machine set up than the shape and sizing and aesthetics of the chair. My distinctive rocking chair requires mostly handwork and indeed I only made them by hand. It might surprise you to learn that the Craftsman-style rockers I have made were all made by hand too. Even though they can be machined all the way through. Setting up the production run of 20 mens they can be made by one man in two weeks. It’s at this point where I might consider more the possibility of selling them at a fair price. This is where the formulas work best. 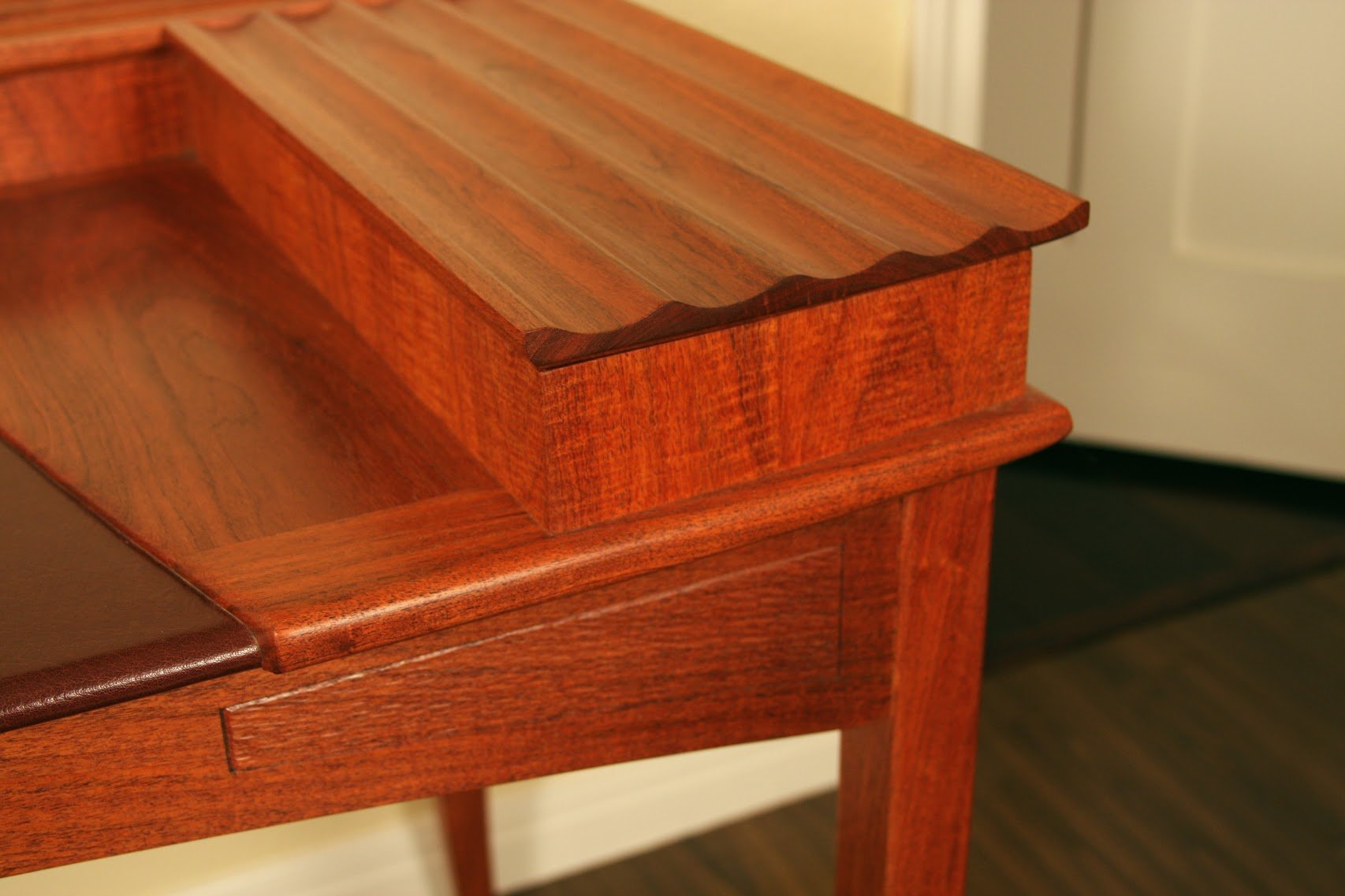 Not always is it horses for courses. Were I to need a deck building on my house I would consider taking bids from three or four carpenters. I would want everything specified in the bid. Treated wood, 2x6s, decking and so on. The work from the four carpenters would hopefully be identical so I would get my deck to the same standard. This then would lead to my expectation of a competitive and fair price. On the other hand `i come up with a birdhouse design made from rubberised composite material that’s indestructible. I designed every part including the composition. Whereas it is just a birdhouse, it has added value in a variety of ways and this increases the price I might want or need to charge for the piece. This then would have nothing to do with how long it takes to make the piece with the caveat that the piece is only worth what customers are willing to pay. 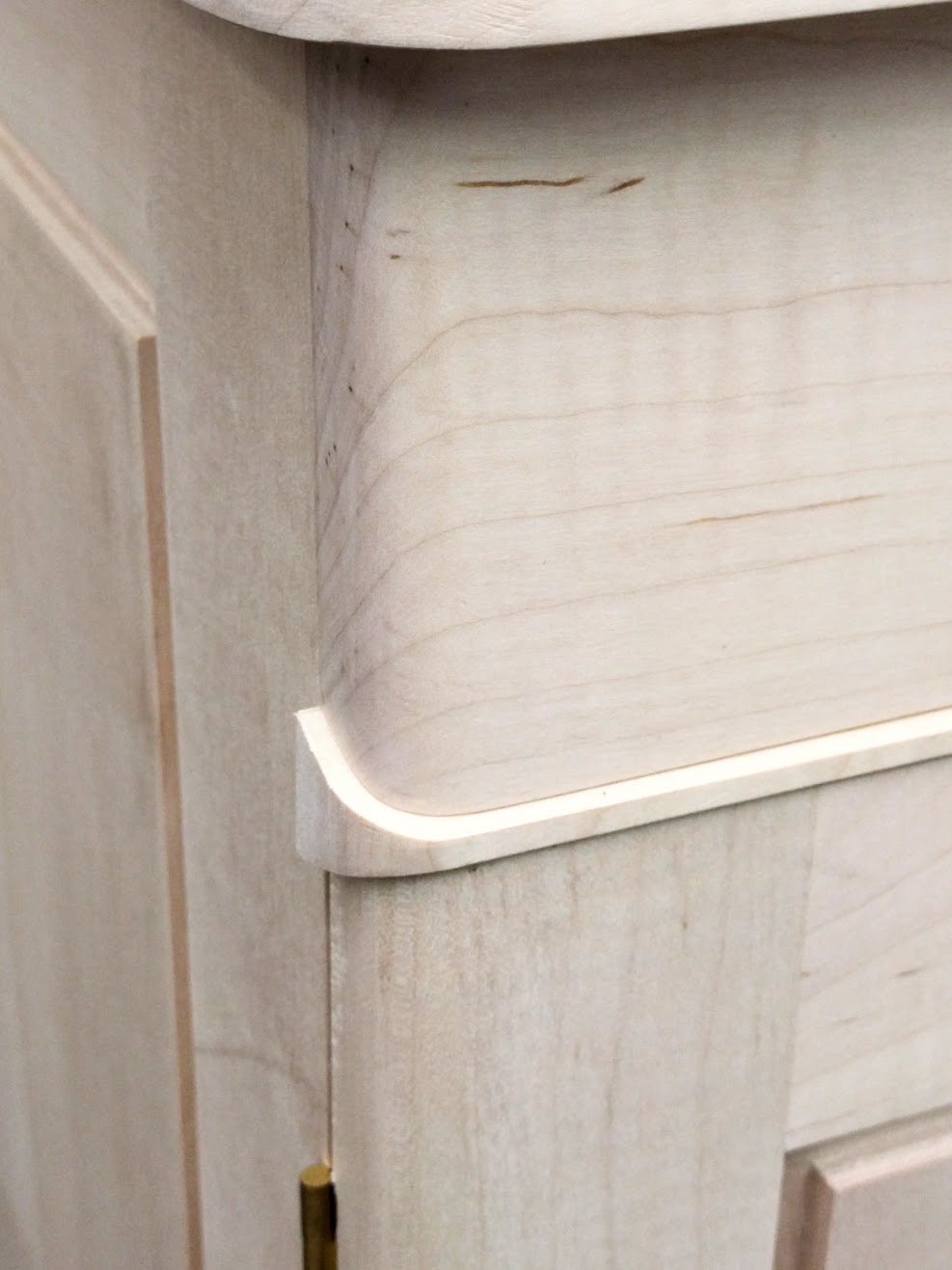 Ultimately you, the maker, have decisions to make. Reading Yoav Leberman’s book makes one aware that many people, the majority perhaps, might expect to pay much less for a dining table made from scaffold planking, but Yoav’s evaluation must include his trips to the dumpster, denailing, preparing the wood with a belt sander and such. His ambition was not to come up with a low-priced item but to make use of wood that would otherwise be discarded. His book is more about concern for wastefulness, design with a difference, enjoying the dynamic of making something from something of minimal value. In fact, he wants to elevate people’s perspectives to a new high. He wants people to wear a different pair of spectacles. His book is about opening people’s eyes to alternative options.

It’s hard to say how long a project will take to make because people will often use short cuts to get a product that might look the same but is not. When I went to my first craft shows in the USA I met other crafters selling at the same venue. I displayed my hand made rockers on the parkland and people admired them. Hand made joints, all surfaces planed by hand. No short cuts. Another maker had very similar chairs and a quarter the price. He looked at my prices and raised his. His rockers were made with pocket-hole screws and he had stock parts in bins in the back of a long horse trailer with a production crew and screw guns assembling them. Side by side the rockers looked very similar. What to do? These were the questions:

And the second questioner:

I realise that many woodworkers see their hobby and their developed ability in the craft as a passport to an income-producing future. They would like to turn their passion for woodworking into a business. Some see that step as validation. They are becoming a professional. They can sell what they make. Success. In reality I have seen many woodworkers enjoy far greater levels of success by simply enjoying their normal working and keeping their woodworking as a separate entity to turn to at the end of the day or weekends. The reality is that the change from perhaps hobby to business often brings with it a change of attitude, vision, direction and of course goal. In its origin, woodworking was more a feeling. Wanting to create something from wood regardless of the methods used. Woodworking to begin with was perhaps more a stepping out of the business world into a world of creativity. The intended hobby was indeed the antidote to the tedium of their work that actually supported them well; the work they were trained fir and did day in day out to earn money. The question then for me is not how can I but should I? I could jump in with the business formulas on developing structured pricing systems to cover cost, generate profits and have a business that survives where others fail. The important thing is to consider why you want to change from your original plan to become woodworker to become a business person.

Selling rocking chairs for thousands of dollars may well seem to be a great goal. For me it was that I lived and worked as a furniture maker based on my choosing my occupation in answer to what I considered to be my vocational calling. When I applied for an apprenticeship at 14 years of age I was not already a woodworker nor did I have any skill per se. I simply knew I wanted to be a full time woodworker as a result of making a few things from wood. I think some inner examination is really in order for anyone wanting to start out. Whereas I did make my living from crafting anything and everything I could with my hands, I was also highly skilled to make furniture. Chopping a mortise of 8 minutes, fitting the tenon in ten more, means a dining table with tapered legs in a shaker style is two to three days work. I sold them for £1,200. A dining chair only sold for half that, but six sold at once. I made a living.

11 thoughts on “What’s My Worth—Part II”