The rounded parts shine as a silvered smile wide-spread from the light shed evenly through the window. It seems to greet my own smile as I stop to take in the sight. I doubt whether others know it to be a remarkable thing for a wooden plane’s handle to wear smooth like that from just a man’s hands. I mean, it takes years upon years of handling, spinning, swivelling, turning, pulling and pushing for that to happen and with no varnish or some kind of oil; it takes decades, a century or so. I look more until the whole of the plough plane registers its different parts as images to be fixed, indelibly recorded, in my mind because I don’t want to lose the warmth of its loveliness.

And what of the saw too? I have many old saws beginning life ten and fifteen decades past, yes, a century or a century and a half, I’m quite sure, with the smoothness I speak of that draws the hand so and the fingertips to lightly touch where the shine bends, and light is the touch for fear of disturbing something almost holy, and rightly so, for to a man who makes, his work is honour and becomes his form of worship to respect his own maker. 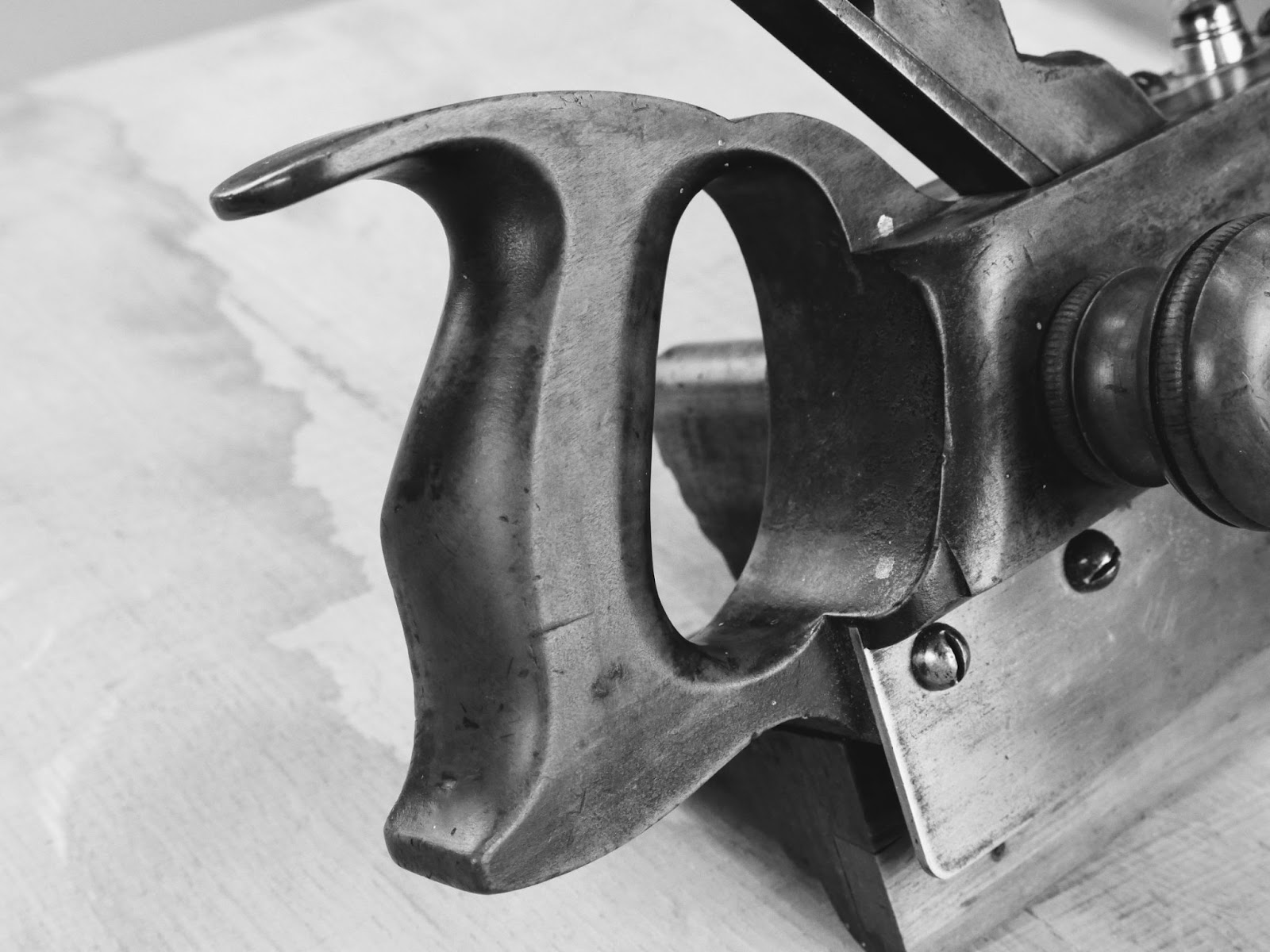 The metals glisten as hard metal in its glinting often will in contrast to the softness of a wooden tool’s worn places to speak of ages gone that we’ll never know again and most never knew. Odd, that, if you think about it, dwell on it for a minute or two. There seemed to me, at least, always to be the certainty of a certain kind of honesty about the tools made by a man’s hand, according to his name I mean, I suppose, you know, his reputation. Yes, his reputation was reflected as the shine from the smoothness of the surfaces he worked and wore down for decades by his sweat and the roughness of his hands.

And then, I see more exquisiteness just when I thought I was done, in the thin line of registration of the cutting iron along the simplest vee groove chiselled in the back that located in the fore-edge of the rear sole of the plane. How do you explain the beauty of such simple yet complex forethought as this, the blacksmith’s chisel cut that forged the fine detail along the back edge of that long tapered iron? Is it not a lovely detail yet without excess? No one really knows of such things nor the reason for them, let alone sees them, I think. You know, it’s that single strike with the heavy hammer that draws my eye the most, and the blow that sets the chisel edge dead centre along the thinnest of narrow edges like that. I can hear it now as I heard the blacksmith’s hammer blows for 20 years every day in a treasured era past. Watched him too, I might say. It’s a wonderful thing to see the work of a man who made in the work created a hundred and fifty years ago too. 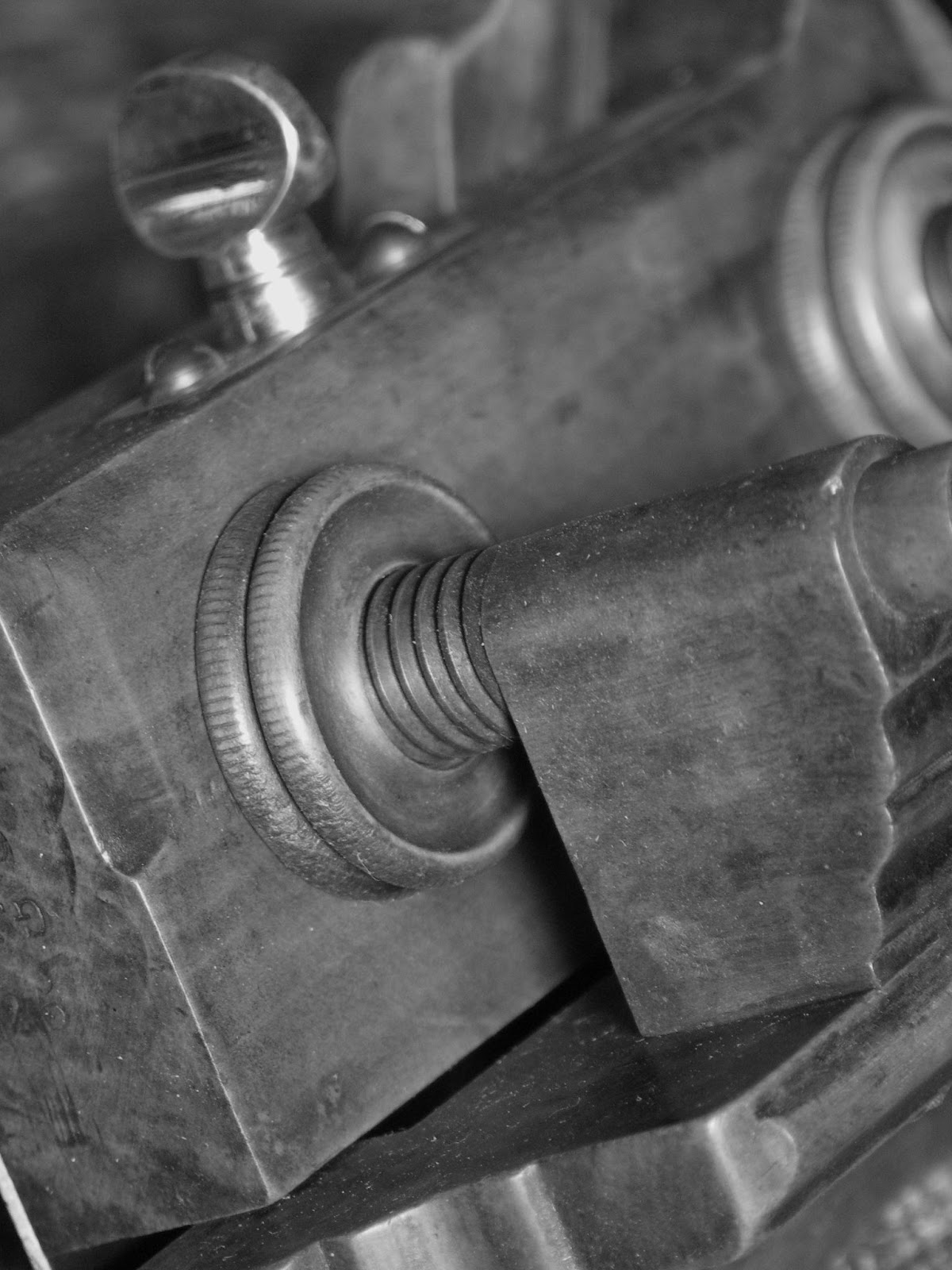 I’m not really sure when the threaded stems for adjusting the fence distance became so finely made and included in the better-made plough planes made of wood. That’s really of no interest to me. 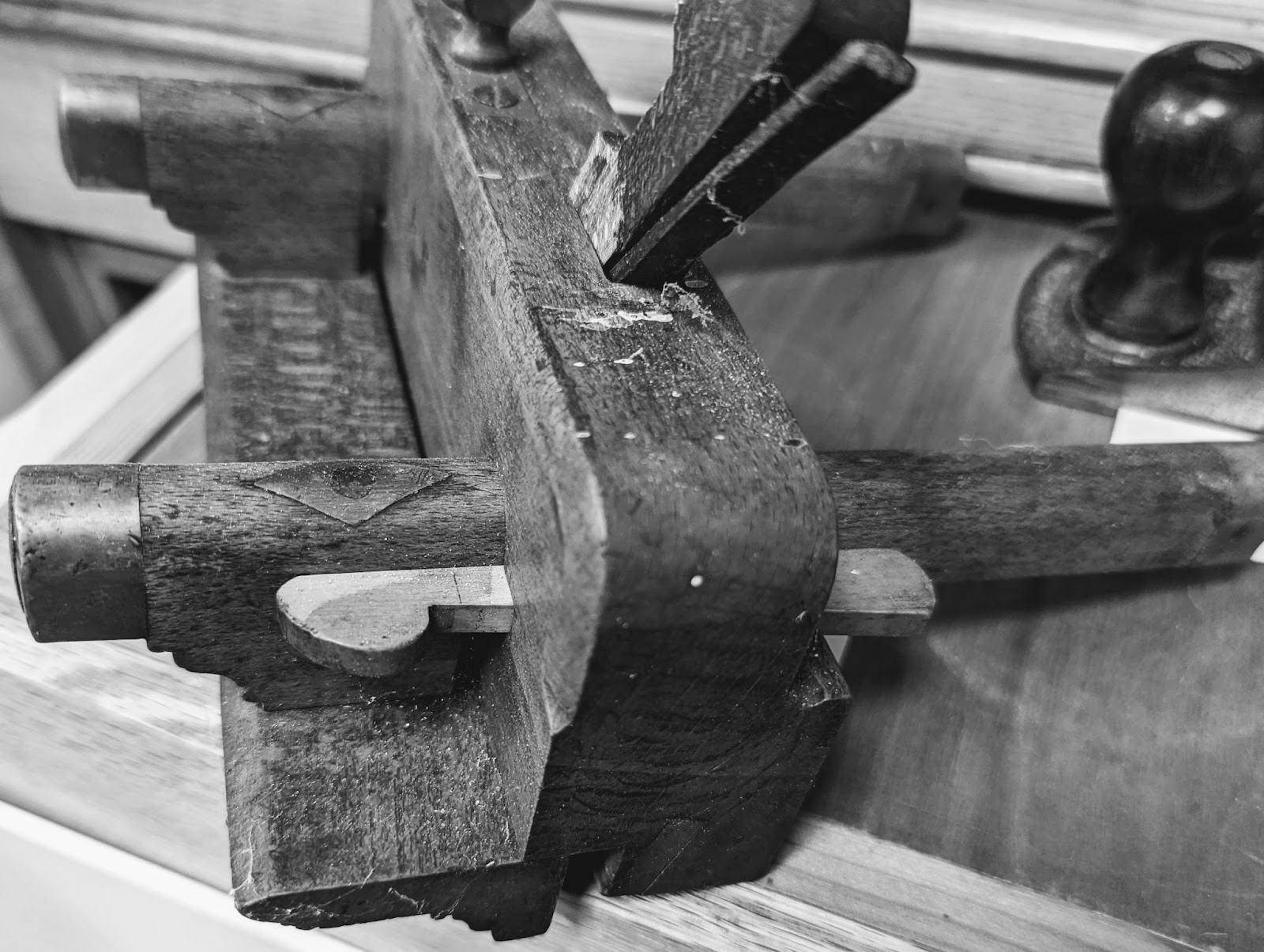 Replacing the wedges for locking the distance with something so infinitely variable yet accurate and positive took a major investment of the maker’s precious time and skill but, again, don’t you think that this is worth acknowledging in the remarkableness of things?

He, the man maker of plough planes, was halted in the comfort of what was common to him, accepted ways, you see, a sort of knowing of a comfortable of doing it, if you will, and discomforted himself by taking his commoner work into new realms with little more than an idea, a thought of inventiveness to better what was with an innovative new. Again, additionally, this was in the face of an onslaught yet to come from a new breed of maker; makers pursuing mass-making methods and systems where makers of metal-bodied planes would soon ensue — Mr Stanley of Stanley fame was yet to become. It was a decade or two to the demise of men called Marples or Sandusky, where the beauty of wood and its idiosyncrasies, personalities that wood alone has, would become outdated, outmoded, big, clunky and, slowly or not, untenable even.

But the screw stems with their beauty formed so in regulating wooden threads of box were really a very fine addition, don’t you think? And when I look at the wornness through so many decades of use I wonder that these makers ever saw (or witnessed) the end in sight as industrialism first crept slowly over their working and then, in a great upsurging tsunami, swept over the worlds of all crafts as a great and destructive tidal wave named progress.

These threaded rods are very lovely in their wornness. Softer now than then, the nuts rotate perfectly as long as you are in a dry place. 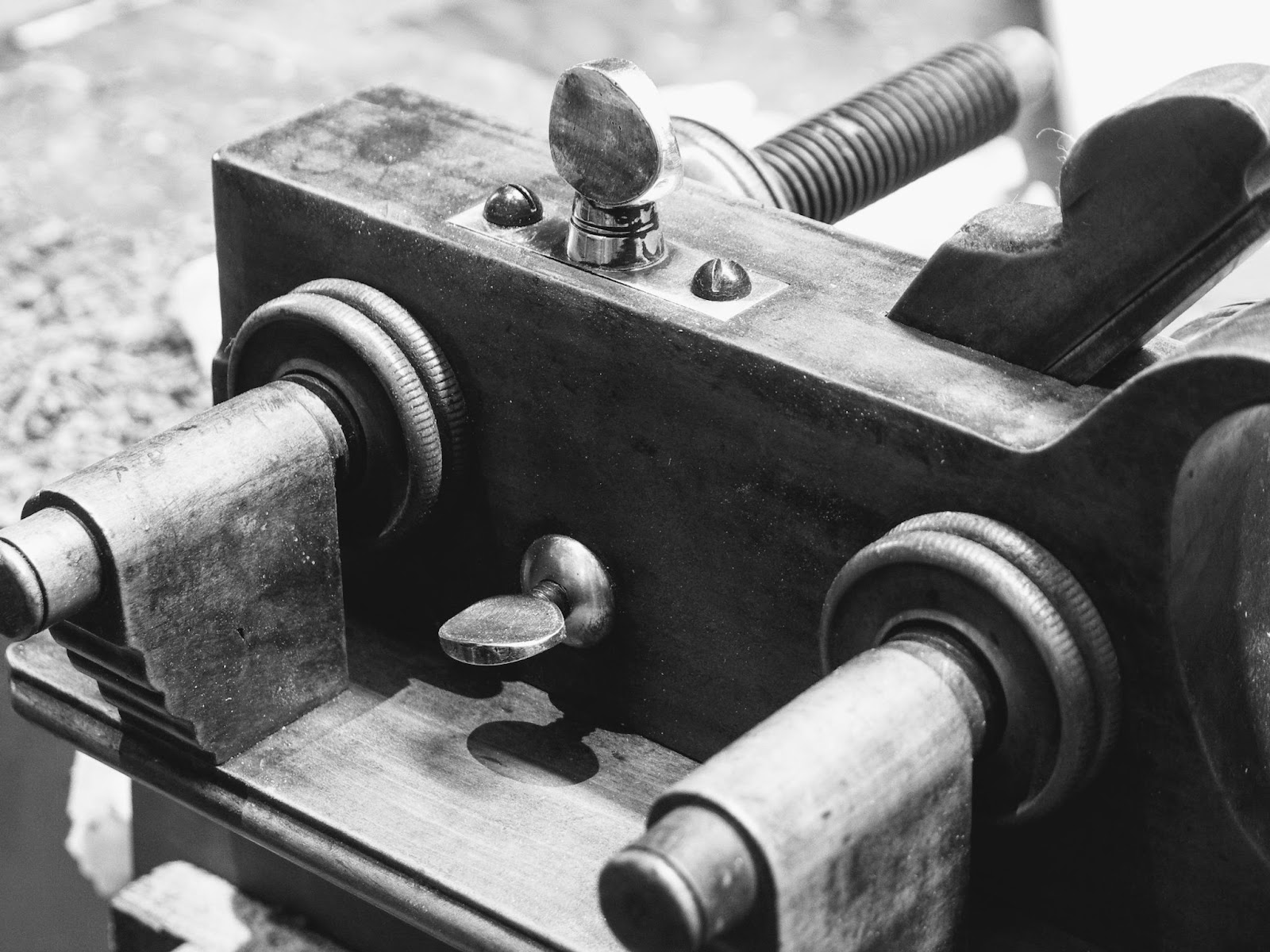 They will spin many revolutions to take up slack, perhaps as many as ten. I think too that we might miss something here and fail to see. The infinitely adjustable screw thread for adjustability in the wooden plane was never carried over into the all-metal versions. The one thing about the screw-threaded adjustable stems that no one discusses was how they never ever moved whereas all wedge stemmed ploughs did and so did and still do the Stanley, Record and modern-maker versions too.

The bulk of beechwood grew less in the plane, the low handle, in-line so to now align the hand and the forearm with the elbow in a direct push and pull back, the solidity of a corbelled fence. Someone thought, in the making of the plough plane, of the man who would be using in the making of a future those grooved frames of doors and of drawers for drawer bottoms, of deep skirting boards where the grooves always prefaced the following thrusts with a half dozen moulding planes in hollows and rounds, in astragals, ovolos, ogees and such. You’ll recall, with me, perhaps, a day before the router screamed out for hours on end and working men knew nothing of ear defence, or face masks to keep machine dust from causing cancers in the throat and nose or emphysema in the lungs. You know, when every stroke was paced, measured if you will by the length of a man’s arm reach and the spread, no, more, the stretch and the stride of his legs. When exercise was your work and you exercised throughout the day’s doings.

When you first lift the plane to the wood, now that the plane is broken in after a century and more, if you’re not yet used to it, it will feel a tad awkward. Keep it sharp and use wax or a thin smear of oil to free the sole and the fence from sticking. You’ll thank me for that. I’m waiting for the look and the raising of the eyebrows, the release of the chemistry and such. It’s indescribable. There is no vibration and no grabbing or sticking.

19 thoughts on “My finished plane story”