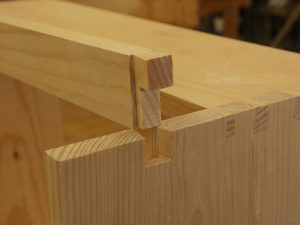 Last week, before the woodworking show in New Jersey, I glued up my new tool chest and had hoped to make the last drawer before the show was over but that wasn’t to be. Too busy! 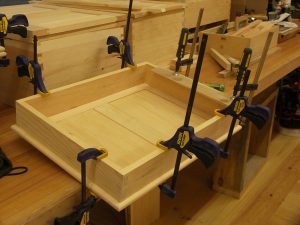 This week will do some more on the chest and have another training session at the school and I will get my tool chest finished for the show in Fredericksburg, Virginia.

I will be breathing a sigh of relief not to have my tools in cardboard boxes I can tell you. Here is a detail of the cross rail joinery on the box. This is the dividing rail between the two drawers. The lid itself will lift up for plane and saw storage and other tools too such as mallets and hammers, marking gauges and so on. 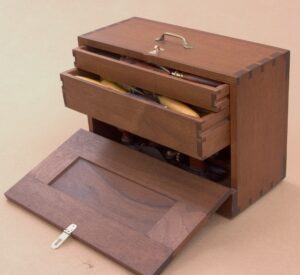 I will show more of what we get done as we go and also I am planning our next training project, which is a joiner’s travelling tool chest. This has the same instructional value as the chest just made, but is a great way for transporting tools around from job to job or n my case, show to show. Here is one I made with Joseph back in around 2002/3 when he was 13and, actually, he and I travelled to one of The Woodworking Shows shows when they had some in Tulsa, Oklahoma. I had milled all of the mahogany to dimension only and all of the rest we did by hand at the show itself. AT the end of the tree days we had all of the mortise and tenon joints done, raised panels made and dovetailed box and drawers finished too. Joseph did much of the work.

← The USA tour continuesMore on work in progress →