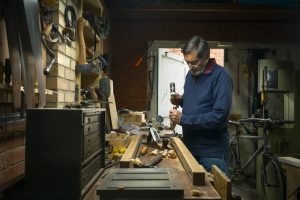 Paul Sellers describes himself as a lifelong amateur woodworker. Paul began woodworking in a small joiner’s workshop in Stockport, England in 1965.

Paul spent a large part of his working life in the USA where he taught woodworking courses.

Paul’s hard work and love of the craft resulted in his designs furnishing the homes of President Bush and Senator Gramm, two of his pieces also grace the Cabinet Room of the White House as part of the White House Permanent Collection.

In 2009 he moved back to the UK and since then he has launched his highly successful YouTube channel, a project subscription site called Woodworking Masterclasses, a site for beginner woodworkers called Common Woodworking and released his latest book, Essential Woodworking Hand Tools.

In early 2018 Paul and the team moved to their current studio in Oxfordshire.

Paul’s next project will take place in the form of the ‘Houseful’, an exciting new venture which you can read more about here.

You can find past articles written by Paul Sellers in Woodwork, Woodworker West, Popular Woodworking, The Woodworker, Traditional Woodworker, Good Woodworking and others.