Further chat on chatter and planes before we close.

Most of you get the point but some not. Someone suggested we call scudding chatter as that is what people are used to calling it. I suggest not but I stand to be corrected. Chatter exist and is a phenomenon. I think that we should keep it and identify it by its reflection in the surface of wood, otherwise we will lose its identifying capacity for a specific occurrence and dumb it down to generalities as happens all the time in woodworking.

Some think that I set the iron and caused the scudding with the cutting edge ot the iron 3/16” from the edge of the cap iron. That’s not the case. After 48 years of working with a hand plane for hourse every day I don’t feel I need to heed advisors that tell me solutions to problems I don’t have. So, I purposely set the iron 3/16 as an experimant to see if in fact this cause any surface defect in planning and found repeatedly that it did not. I created perfect surfaces every time so it is not the thickness of the iron or the cap iron or the weight of the plane, but it could possibly be just as it could possibly ( and most likely) be the would itself or a combination of a dozen things. 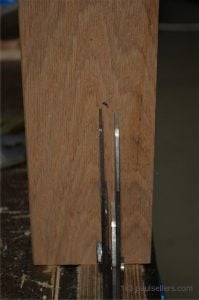 Thin irons are about one third less in thickness than thick irons. 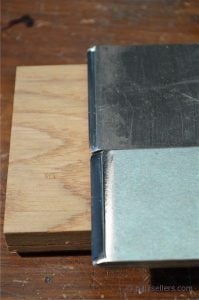 Someone said we should just use thick irons and heavyweight planes and eliminate the possibility. I disagree because there are many other things that we should consider seriously. One thing is that we are using 30-40% more steel, often the wrong steel, and we cannot use only hand methods to sharpen because we must now remove one third as much steel to maintain a good edge to our tools. That translates into 30% more energy too, remember. That cannot be ignored. Another thing we cannot simply dismiss is that we want to use hand methods, thick irons have longer bevels and a large amount of steel must be removed constantly.