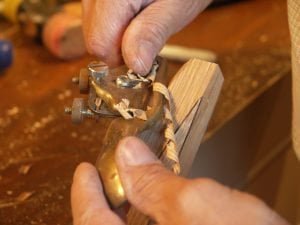 The #151 has been made by many manufacturers since the patent expired. Even some of the cheaper ones work really well and I think for two reasons: One, the throat is wide open and allows unfettered shavings to rise into and through the throat with no grab by the body of the spokeshave and; two, the lightness of the overall whole heightens sensitivity to micro-adjust for the optimal angle of presentation and also the amount of pressure needed to engage an effective cut. Sometimes I think that the spokeshaves with non-adjustment screws are more pleasant to use. I think that this too is because of the lightened weight of not having the extra baggage of knurled adjusters and threaded rods. What do you think? Once I took of all the extras and simply had the body, blade and cap iron. It changed the feel of the spokeshave pleasantly and it worked just as effectively as with the extra stuff in place.

Do you need the adjusters?

Well, the answer is no, not really. When I was a boy apprentice in Stockport here in the UK, George Mycock, my mentor craftsman, would tell me sometimes to have the iron level with the sole of the spokeshave for a particular task, like we do on woodworking planes and such. At other times he would tell me to adjust one side more deeply than the other. Now I am talking about the spokeshave model #151 here. Anyway, the reason was that when I was spokeshaving say the arch of a thick door, I needed to remove an even amount from the whole width and so it was best to have the spokeshave cutting iron parallel to the surface of the sole. 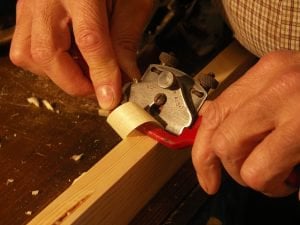 When I was planing the roundover on say a seat bottom, I needed to remove a lot of stock initially, followed by more refined amounts. By angling the blade in relation to the sole, allowing a deeper cut on one side and shallow the other, I never needed to adjust the actual spokeshave but simply move the spokeshave across from the left half of the blade to right side. I’ve used that method for 46 years. That’s how the older model #51 was adjusted. Fast, fast, so fast. Coarse-cut on the left, fine on the right. Now George didn’t invent this, it was common practice with wooden spokeshave of old to set one side deep and the other shallow.That was passed on in the #51 and the tradition continues even though the tool has changed to incorporate adjusters. I like the adjustment mechanisms, they are handy of course, but if you ever get to try a good, well-set and sharpened boxwood spokeshave, you will realise that 300 years ago, craftsmen knew what they were doing too. 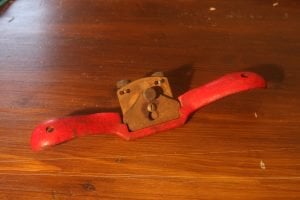 Now here’s a spokeshave I love. I love it for several reasons, not the least of which is my son, Joseph, was privileged to learn how to cast metals and he made this one for me, for my birthday. He was just 14 years old at the time. It’s a #151 pattern spokeshave like the Stanley and Record models produced for decades in the UK and the USA. It’s quite heavy and works well for heavy work, which I often engage in.

This is the Veritas spokeshave I use for much of my work too. I can recommend this tool to anyone. In many ways it reminds me of the Norris planes for some reason. Perhaps it’s the best spokeshave for really fine work. I haven’t really found its equal to be honest, but then again I haven’t tried every spokeshave made either. Veritas make a kit to make your own spokeshave too. This is a different type of spokeshave than the one shown here. It has a wooden body that you make from your own wood, and Veritas provides the blade and the adjusters and other equipment to thread the wood and such. These spokeshaves have the blade as the sole like the old spokeshaves do, but have fine adjustment screws. This type equals the old-style traditional spokeshaves in performance in my view. I am sure some will disagree, but that’s OK. It takes a day in the workshop to make one and the kits, two sizes, are quite expensive, but you get a lifetime spokeshave so it’s not much really for a customized hand made spokeshave is it? 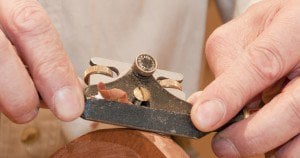 Eventually, you may want a round-bottomed version, but I think I have need of one about every two years or so. If you look at any of my curved work in my furniture, it’s all been done with a flat-bottomed model.

3 thoughts on “Handmade #151 in bronze and others”