To read more about the router plane on our Common Woodworking site, click here

I have used this little hand router for many years. It replaced my old Stanley router #271 as it’s slightly larger than the Stanley model and finely made as is the standard for Veritas Tools. This one has no fine adjustment mechanism and it’s not really necessary because quite, simply, it’s much simpler to move it with your fingers. Though I love and use this router plane regularly, there is a small design flaw that can thankfully be fixed with a flat file in seconds: 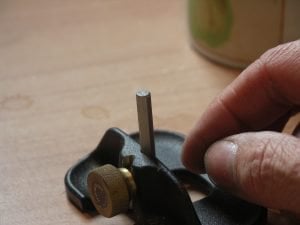 The flaw is irksome in that two things can go wrong at the same time if you don’t remedy the problem and they go wrong when you least want them to happen. Tightening a knurled knob sets the depth of cut and also secures the cutting iron stem. Because the stem is round and goes into a round hole, the cutter often turns in the housing dado as you press and advance the router into the cut. This pressure doesn’t have to be that forceful. The twist is disturbing. The second element is less obvious. Because it’s difficult to get sufficient pressure on the knurled knob, and its a round stem in a round hole, pushing the router into the wood sometimes causes the foot of the cutter to pull out more than the original set position. I believe that this is because the single-sided upper bevel naturally forces the blade down, but the plane sole should normally prevent this action. In this case, the round bar struggles in the round hole because of a lack of friction.

I used a flat file to file to adjacent flats on the back of the round stem. The steel is mild so it files easily. The cast upstand of the body of the plane has a squared channel that will accept the retro-filed stem cutter. The two flats don’t have to be very wide and its surprising how rigid the cutter is after making this small remedial step.