Beech trees grow abundantly throughout the temperate zones of Europe, Asia and North America. The wood is of very even denseness throughout the grain because of its relatively small pores evenly distributed through both the early and late growth of each growth cycle (annual ring). My first mallet was made from beech and most mallets for three hundred years would have come from the beech tree. Though that is the case, and beech is a hard wood, I find beech just a little too soft for making mallets of enduring quality from and so, in my view, mallets of beech have a limited lifespan. Probably fifteen years for me. 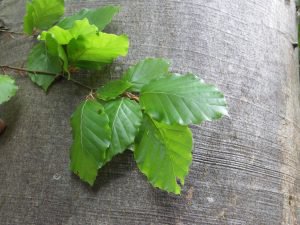 Entering the surface fibres of beech relies on a sharp cutting edge and the wood’s even denseness means that penetration requires greater pressure than say oak or cherry. Though common enough, beech is not so commonly stocked as other hardwoods in the US. In Europe it’s much more common and I find it available in many small lumber companies. 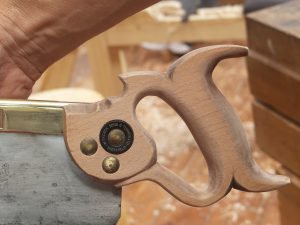 The mature (heart) wood has a usual light brown to pinkish American red-oak colour and also characteristic surface ray fleck pattern that passes throughout the wood on most faces. These highly distinctive rays pass from the pith to the outer cambium as with the sycamore and maple woods. 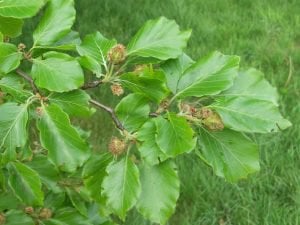 Beech is a member of the nut family and has celebrated success from centuries of tool handle making for saws, planes, hammers, axes and chisels and much more. Walking through the woodlands of beech I find beechnut casings cover the woodland floor within the dripline of each tree: hazel nuts, though bitter, are a favourite food of squirrels and so beech woods host abundant levels of squirrels.

I first laid my hands on beech when I turned my first piece on the lathe when I was 13. It was a hefty rolling pin. 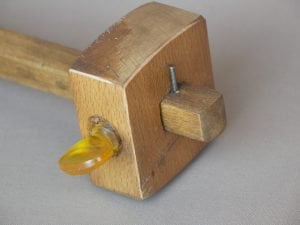 Beech trees grow to huge sizes and 4′ diameters are not uncommon.

I think its greatest success was as the plane wood used in the manufacture of millions upon millions of bench planes and moulding planes both in Britain and the USA.

In the manufacture of wooden planes and spokeshaves, beechwood knows no equal. It resists wear by its innate resistant qualities that far surpass harder woods and so planes lasted well.

Beech is a stable almost textureless wood that distorts minimally, even with weather changes, though no wood is exempt from some measure of distortion. It’s an easy wood to work whether by machine or hand tool method, though often prone to tear for no apparent reason. I like to work beech, it responds well in general to hand planes and scrapers and also sands well. 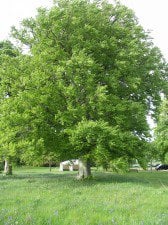 These are my thoughts from working with beech and seeing the work wrought in it by craftsmen of old. Here at the woodworking school we use a variety of domestic European hardwoods using hand tools. I don’t think beech to be an attractive wood: It has no swirling grain and very little variation. Stain makes little difference to its colourless character, but its silent and hidden strengths have stood the test of time for craftsmen for millennia.