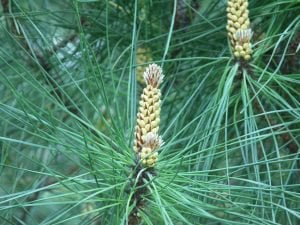 I’ve worked with many different types of pine throughout every one of my 48 years since I picked up my first piece of Russian redwood to carve a boat from. Whereas people generally consider pine (and other such softwoods) second-rate soft wood, or, worse still, junk wood, I consider pine superbly ideal for a massive range of woodworking projects including furniture, general joinery and construction work. It is not so much that this wood is a cheap wood in the sense of low grade, but more that we have simply devalued it by cheapening its qualitative worth. Pine bears the brunt of poor work practices simply because it’s easy and lightweight to work with and it’s easy to brutalize with power equipment. But for centuries pines of all kinds have provided the generations with a wood having diverse range of texture and colour, which I find unsurpassed in quality and beauty within its sphere grade. From Eastern white pine, the ponderosas and the Longleaf yellow pine to the Russian redwoods of Eastern Europe, we find dovetailed tool chests in the holds of ancient sailing vessels and long-case clocks on the walls of manorial hallways. I cannot emphasise enough the cultural value I find in this the commonest of all softwoods. It helps when we see that 80% of the useable wood we use from around the world comes from softwood forests. 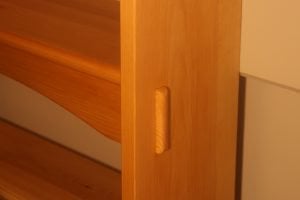 In the USA they sell some lumber grades under a catchall name known in lumber merchants as SP&F. It’s simple enough to understand when it’s explained. These letters represent an abbreviation for spruce, pine and fir. Because these species are less visibly identifiable once converted to point of sale they are classified this way. Sometimes they will use the term whitewood too. SP&F woods are generally much more stable than most of the other lumber grades used and stays true and flat. Southern yellow pine on the other hand crawls all over the place after its cut from the bundle and should be worked as soon as possible to restrain it. 2×4 studs are available in SP&F grades and nail more easily than say hemlock. I have used it for laminated bench tops and leg frames and aprons. As an apprentice, all of the workbenches were made from pine, spruce or fir and I never saw a workbench made from nay hardwood. Many so-called European workbenches were made from softwoods and rarely hardwoods.

I have worked extensively with Longleaf yellow pine over the past 25 years. This pine should never be likened to most other pines because most of what’s been available over the past decades was first- or old-growth lumber. Growing in forests with tightly closed canopies produced extremely slow-growth wood with the resultant growth rings so tight the denseness of late growth rings formed the densest and hardest wood known from pines. Those days are gone and will never return. As far as I know this pine is not and has not been available for decades because it was all but exhausted. Some 35,000 acres of true old growth Longleaf pine remains in protected forests of the USA. The only wood I have ever used has been reclaimed from demolished buildings. It was a privilege to have worked with this wonderful wood. 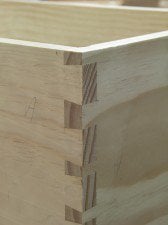 I love to work with Eastern white pine because of its even texture, softness and lovely colour. Though the growth rings are very flamboyant and the disparity in early and late aspects of growth ring significant, the wood has relatively even density across the growth rings, which is unusual in pines generally and also in firs and spruce trees too.

Here is a toolbox I made from Eastern white pine. It’s very light in weight yet its strength to weight ratio makes it ideal for keeping heavy tools safe and also moving the tool box around the shop as needed. I have used Eastern white pine for dozens of projects. Following a sealer coat of shellac, it stains and paints well and comes to a high lustre with only two or three thin coats. 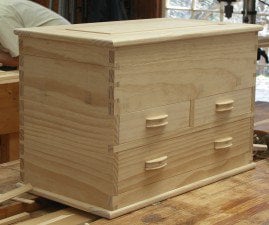 Probably one of the least appreciated of the softwoods, spruce is an excellent wood for a wide range of woodworking crafts. It’s weight-to-strength ratio has no equal and so as a building grade wood it makes great roofing trusses and also joists and wall studding too. 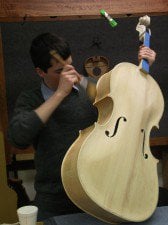 More than that, there is not an Amati, Guarneri or Stradivari violin, viola or cello that would be in existence had it not been for spruce. Spruce is the perfect tonewood used in traditional bowed instruments and also guitar tops (fronts) Spruce is a tonewood chosen for its tonal qualities. I made a cello with my son using Alaskan spruce for the top (front or belly). It was wonderful work.

A stiff and hardy wood, spruce tolerates poor living conditions and poorer wet soil locations, often occupying land that pines will not tolerate well at all. They stiffly stand against extreme conditions and serve as good windbreaks in extreme wind exposure.

Not many people talk about fir. It’s more soft-fibred to work than most pines and spruces as the grain is somewhat stringy, interlocking and cut-resistant. The annual growth rings have distinct hard and soft aspects, which can prove difficult to plane and saw with hand tools. As a boy we made lots of paint-grade doors from fir. Fir is considerably less favoured than spruce and pine softwoods, but it does have a considerable commercial value in the wood industry. I like it because of its solid feel and its strength. Haven’t made an awful lot from it in the last two decades, but one particular way I like to make things from it is as quartersawn wood; the strong growth rings give highly distinctive lines that look wonderful in door stiles and rails.

Firs are evergreen and highly aromatic with a strong, long-reaching central stem. The almost 200 species and varieties grow mainly in the subalpine northern temperate zones around the world and thrive primarily in the clean air of these upper reaches. They also grow in lower areas provided the air is unpolluted.

So where would a craftsman use this group of pine woods?

In times past pine definitely supplied the monstrous needs of poorer working peasants, the working classes, work below stairs and the immense range of window frames, doors, door frames and the internal flooring beams and boards of factories, homes, offices and in fact just about all woodworking superstructures where hardwoods were an excess in both quality, hardness, weight, and strength. Walk through any building structure and the wood used for most anything in it or part of it will be pine. You will wonder how it was possible to find so much wood to create such mass of product. Imagine further still how often these products have rotted out and been replaced. And that is the wondrous worth of solid wood whether pine or oak, ash or cherry. Wood replaces itself.

Pines, and I include spruce, fir as well, come in varying grades of hardness, rot resistance, strengths and so on and so we often choose our species and types best suited to particular applications. Redwood pine is highly rot resistant and consistently hard and so makes a good wood choice for doors, door frames and complete window frames. It would be futile for me to even attempt expressing the versatility of all pines used in general woodworking through the centuries. The would has been used throughout the USA, Canada, and every European country for centuries and no other wood species has ever replaced it.