The blue sky over my house this morning and thoughts of the work I must do now that we have the book finished and at the printers reminds me that space and time correspond with each other to provide my creative space. I often ask myself why, in our troubled economic times, crafts like mine, and other arts for that matter, fall so low in the scheme of things, especially education. Following a craft or trade seems like a secondary class into which the thick and dumb must be assigned to because they couldn’t make it academically, yet for me it means creatively engaging in critical thinking each minute of every working day. How did we arrive at the fact that to be a plumber or carpenter somehow places you in a sub intellectual class whereas being a furniture designer or a mechanical engineer somehow gains you higher credence, but all are below the academics and white collar workers as we once knew them. Education and the educated have a lot to answer for in creating the unemployable. 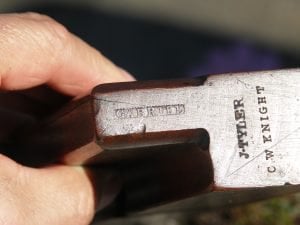 Anyway, poking around in the industrial annals of history as I do fr a few minutes daily, I look at a hand plane made of beech and steel, like this one here, and I feel highly inadequate. Gabriel, the named maker stamped on the toe or fore-end as shown, was the proud signature identifying a man who’s work exemplified fine and critical work. Not only was he a woodworker, he was a tool maker making tools for the workers of wood; the highest accolade of refined craftsmanship and recognised by all to be the best. The meticulous detail on something hand made to work wood between 1770 and 1795 is, well, quite humbling.

Of course today we’ve lost the planemakers of old. In the wake of post-industrial woodworking we admire machines in similar fashion, failing to recognise that the only reason these tools were abandoned was because they didn’t, couldn’t, keep pace with the industrialising of a whole people…Nations if you will. It was never that they didn’t work and work extremely well. It was that they required great skill to make them and some measure of skill to use them. Dumbing down skill and creativity to make mindless workers on assembly lines started by Henry Ford and followed by others took only a few decades of conversion to get the hook in so that the barb would hold. 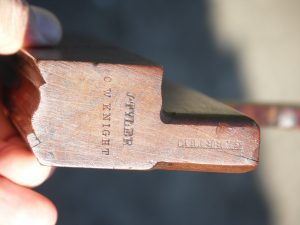 Forests of the new world brought straight-grained lumber in massive amounts and so hand planes in their day wrought flooring and panelling with tongues and grooves and moulds (molds US) that ran parallel to the surfaces. A perfect marriage of wood and plane.

I use moulding planes and tongue and groove planes in my everyday work rather than turn on the router, which usually happens by necessity a couple of time a year. I love owning them and they are cheaper today than they have ever been. Imagine this; what took a man a day to make in the 1700-1800s can be bought on eBay for as little as £3 ($4.50 USD) and rarely more than £10. As I type there are 151 available on eBay UK alone. Were I to go and make one now it would take me a day at least. Plus the iron! Shaping the steel and fitting it to profile would likely take me a couple of hours.

More later today. Got to go and see the new sharpening DVD for the first time!