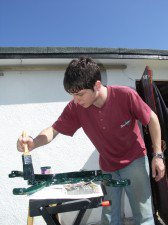 I hear fairly frequently that craftsmen advertise for an apprentice only to find that the person applying doesn’t really want the job but must apply to get state benefits, or, equally sad, no one applies. We bandy around the term “apprentice” with alacrity in this new and recent era of austerity, hoping to revive what we killed off over six or more decades yet no one accepts responsibility for selling out craftsmanship in pursuit of cheap consumer imports. Problem now is that the imports are no longer cheap (inexpensive), and neither do they lack quality. And the cost to the Nations in the Western working world is now devastating as the consequences of shortsighted policymakers of the 1900s are exposed in the largest number of unemployed and untrained young people we have ever known. The truth is that we sold out their birthright to work productively and a hard reality has hit that many if not most products produced elsewhere now surpass our current ability to produce quality goods. Meantime we have an unemployed and unemployable generation. The structure of most if not all training strategies have become strictures that strangulate through a legalism that makes me wonder how on earth we got here. It’s hard to think positively in the face of what has taken place but here are some hard facts that I have learned:

The real costs to the master

1: Training 1 new apprentice woodworker (or any trade for that matter) renders the lone craftsman about 50% less efficient for the first year, yet no college or university can provide the core training that he can give.

2: In the second year, the craftsman is still less efficient by around 35%, but he’s committed to the cause because he cares for the young person and wants to see him grow.

3: The craftsman is often training his competition as has consistently happened through the generations. As soon as the apprentice becomes competent he sets up in business on his own next door.

4: The craftsman is obliged to pay minimum wage to a highly inefficient trainee even though he himself is now only 50% efficient.

5: Health and safety risks increase by 500% and so too insurance to compensate for just the possibility of injury.

6: Bookkeeping to deal with the legalities of being an employer increases beyond his real capacity to provide coverage.

7: Responsibility increases beyond the struggles of being a sole artisan to now become that employer/trainer. Remember we are not apprenticing shelf stackers in the local supermarket that takes an hour or so, but skilled artisans that takes possibly years.

8: Responsibity to be there every day all day becomes essential, yet as a lone craftsman he still must work extended hours to wear all the caps it takes to live the artisan lifestyle he or she chose rather than be absorbed into the megabucks business world that only does what it does for money. 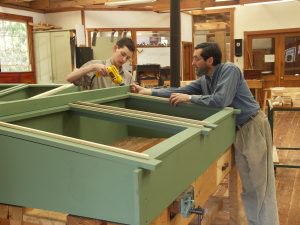 Why should we craftsmen apprentice others?

Fact is that most skilled craftsmen today don’t. They cannot. I can think of two dozen more reasons why we should not apprentice apprentices for pay, but that is highly negative. Truth is that that does not stop us from training others. We continue to teach and train when someone knocks on the door or sends a CV telling us how good they are and what a team player they are even though they have never worked a day in their life yet. We still continue in whatever way we can to contribute to the cause of training our replacements here on the earth.

For most of us, apprenticing is payback for those years when we ourselves sought bona fide training and fulfilled that role. Yes, it’s burdensome and, yes, you can train young men to work with their hands only to have them give up for some whim after a year or two or, as I said, set up in competition with you in the same town. But, somehow, every so often, you find a young man who just soaks in the work like a sponge. He gives himself to you in his entirety. He serves from his heart and determines that he will master everything and at the same time guard his heart against anything that would cause division. 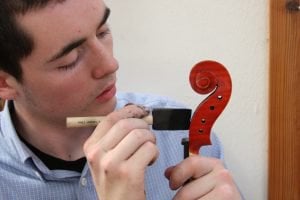 The bonds of apprenticeship

From time to time, at different phases, I have found such young people. The truth is with such people that they know that they could not pay for this type of training. It cannot be bought. As an apprentice of 15 years I was indeed bound in my apprenticeship to my then master. When an apprentice and a master craftsman begin working together there begins to unfold a unique bond of interdependence that flourishes in freedom not control. Not dissimilar to a father and a son in working together. A father should never use his privileged parental position to make emotional demands on a loyal and caring son. Familial ties are always based on love and care, never to be taken advantage of.

Apprenticing cannot be paid for because it cannot be bought and should never be sold. You don’t buy such things from the marketplace even though that’s what happens in everyone’s life every day in today’s world. But that’s the difference between the culture of the corporate business world and the culture of the craftsman’s. Just as the craftsman cannot be hired to train others, neither can the apprentice be bought to be trained. The matured apprentice, the journeyman, cannot be bought either. He may receive income in exchange for his further training and the work he produces, but that has nothing to do with anything. The craftsman, the apprentice and the journeyman work not for money but for their calling. You may say that’s idealistic. That’s your prerogative. I happen to believe in it. The craftsman trains the apprentice because it’s his calling. The apprentice serves his master, for that’s what he is, because that’s what his calling is. The journeyman saw this in his apprenticeship and regarded it. He carries this sense of respect into his journeymanship with humility. The master woodworker is not lord of his workshop as an austere authoritarian man. That’s more the archetypical master we hear of or see from Dickensian times. The master has submitted himself to the training through years of self discipline and mastered his craft of working wood or iron or leather. He was trained under the Master he serves in answering his calling. He is master of his craft alone.

Apprenticing means no one working for mere pay and having them produce nothing for sale. They work alongside you as master and work and glean from each decisive move you make. Apprenticing is thinking critically by engagement in the work; be that the master’s work or the apprentice’s. Unrealistic? No, I don’t think so. It depends on how badly the young apprentice wants to learn and the man is willing to spend his time training him.

6 thoughts on “Master and apprentice”