Talk about planes with most people and the issue of plane chatter raises its ugly head time and time again. Whereas I try to offer a balanced view, those presenting articles on plane irons, planes and so on tend to be resolving an issue that’s more of a rarity than the norm, unless what they describe as chatter is a misdiagnosis and the results of what most people think to be chatter is actually something else.

In general it’s true to say that planes don’t generally chatter? Quite simple really. Some two or three decades ago someone identified the genuine occurrence of chatter as a phenomenon of vibration, iteration if you will, and wrote about it. They were identifying a problem that occurred in bevel-down, Bailey-pattern planes, which are the most common of the metal bodied planes and account for about 95% of metal planes used in the US and UK. In ideal conditions, i.e. the right speed, plane action, length of iron, right wood and so on, the cutting iron (blade) of a bench plane flexes vigorously back and forth in a unique series of vibratory motions that develop a very uniform series of parallel cuts resulting in aberrations on the surface of wood; usually in an isolated section, small in size and localized. 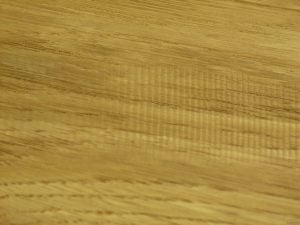 This is how true plane chatter looks. It occurs in short bursts as a plane stroke is swiped on the surface of a board. Very different than other stammers, stutters and scuds.

It’s a rare occurrence, minutely small and could be easily sanded with #240 grit paper in seconds. This phenomenon is an identifiable condition that occurs primarily through minute micro-flexing back and forth in quick successive vibrations on the minutest level in the short distance between the frog and the cutting edge and thicker irons do not necessarily eliminate this very rare phenomenon but they do minimise it. Now on the other hand there are similar occurrences that have nothing at all to do with vibration or flexing that most if not all woodworkers confuse for chatter and that should be identified more as skipping or better still scudding. Scudding has definitive characteristics that create the washboard effect in the wood’s surface and many identify this washboard surface as chatter, but that’s not at all what it is at. Scudding can be caused by a variety of different influences, not uncommonly hesitancy, inaccurate plane iron to sole alignment, uncertain action, wet-lettuce hand grip. The momentary effect of landing a plane (hand plane) onto a short or thin landing strip of wood with anything less than sufficient force and accuracy will cause scudding over the surface resulting in a washboard surface, but this is misnamed chatter. It takes confidence to land the plane at the precise level and swipe in a forward movement at the same time, especially when we have had successive failures resulting in a miserable results time after time. Thick irons don’t take care of scudding because it’s most often a confidence issue. Whether its chatter, scudding or whatever, the result is always discouraging, but, persevering, as I did in my apprenticing days, ultimately tames the plane. My 4 ½, with it’s thin original iron, has never as far as I know chattered. There are other reasons for scudding too: Plane iron upside down; protruding to far through the throat, cap iron set badly and so on. Rarely is it the result of lighter weight planes or too thin irons.