Forget micro bevels and guides and get on to real woodworking.

Guides can be good as training wheels but I believe you should get on with the freehand practice asap.

For three decades now woodworkers have been duped into believing that the micro bevel is superior to a long, convex bevel. Back in the 70’s many books written as curriculum by school woodworking teachers taught that a bevel of 25-degrees was optimal, followed by a refinement micro- or secondary bevel at 30-degrees. Of course it wasn’t true, but people believed it because it actually seemed sensible. The problem with the micro bevel was the weakness of the edge. 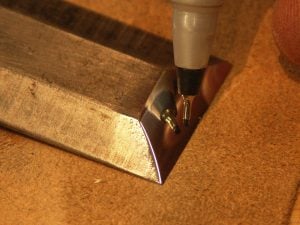 The elongated convex bevel on the other hand has many advantages obvious to any craftsmen that developed it, making chisels and planes far more effective and versatile. The micro bevel added no value to what already existed for centuries but it substituted for developing skill in sharpening. Adding the guides slowed down what only takes an hour or less to master.

The method I use is a non-machine method that creates a convex bevel edge like this in a matter of seconds and will do just about anything I want it to. The method? Oh, it’s around 200-300 years old.

Don’t take my word for it. Try it. I’ll be posting more on how I sharpen and hone my planes, chisels and so on shortly.

No sharpening stone needs to be flat. For three decades woodworkers have been duped into believing that stones must be flat, but if you sharpen on an elongated convex camber the stone can hollow all it wants because you want the convex and the hollowed stone creates exactly what you want. Did you never stop to ask yourself why craftsmen’s stones of old were hollow? I mean all of them? They weren’t stupid for 200 years and then we came along with our better ways and threw out what was working perfectly because someone wrote an article. They only needed to sharpen and hone a convex bevel. I never understood why their seemed such an intent to keep flattening stones. All those gurus of woodworking (little more than salesmen really) out their selling honing water stones and then came the flattening stones and the whole ritual of sharpening and then the whole ritual of method.

You can use hollowed stones and flat stones to create a convex bevel easily in seconds. I use diamond plates and have done for nearly two decades and did so because they also stay dead flat. The main advantage is no water baths and mess.

24 thoughts on “Going against the gods – myth busting”