So you need a dovetail saw. I think that many people think that a dovetail saw is for cutting dovetails and though that is true, it is not so much a dedicated saw but simply a small saw we use mostly for cutting smaller joints and that includes dovetails. A well-sharpened well-set dovetail saw is used as much for other cutting alongside its larger cousin the tenon saw, which also is not a dedicated use saw either. Most tenon saws are sharpened for aggressive rip cut, which is exactly what you need for cutting the cheeks of tenons. A 12-PPI tenon saw with an aggressive rip pattern is not good for cutting tenon shoulders at all. The teeth are really too big and so you either have two tenon saws or use a small-toothed saw like a 15-16-PPI saw, which of course can be a tenon saw. I find I have greater control with say a ten inch tenon saw and this just happens to be the ideal saw for dovetails too and so I keep my so-called dovetail saw close to hand for the shoulder-cutting aspect of cutting tenons. Furthermore, that’s why in general I don’t advocate a 20-PPI saw because the teeth are generally too small and too hard to sharpen. Nothing wrong with the saw.

There is of course much information out there about saws. As sawmakers deliver most of the information, the info is not so much about how to maintain a saw but why theirs is the best or about features of their saws, naturally. But the significance of saw sharpening and the importance of the skill should never be dumbed down this way and never lost in the mass of useless information. There isn’t really much you need to know about a saw in terms of its maker or its material. You need good, resharpenable steel, a rigid back, 15 PPI or less – that is larger, and a comfortable handle aligned for and capable of in-line thrust. These are the ingredients of a good saw. 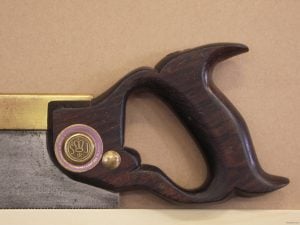 Though I own many good dovetail saws and use them most days, I actually need only one. It’s a 10” 15-PPI Spear and Jackson made in the late 60’s and has a fine Rosewood handle. Rosewood has a lovely feel about it. Smooth as silk in the hand, quite heavy with good balance in my hand. Though not so available today, they occasionally come up on eBay so if you want one, that’s probably the most likely place to buy them from. Other than that there are Disstons too, which have a nice fruitwood handles that after craftsmen owned them and used them they feel quite lovely in the hand. I have one with a beech wood handle I really like. I hope to go to Texas soon to retrieve my tools back to where they belong right next to me. It’s funny how my tools have become faithful friends. 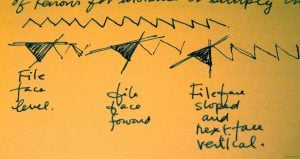 The most important elements to a good dovetail saw is thin steel and minimal set – No point taking too much wood out. These are elements people don’t know. With smaller teeth you can sharpen with an aggressive tooth.

I like progressive tooth shape; that means starting with a passive rake and moving to a perpendicular negative rake. See drawing above. At the toe-end of the saw, for the first 1″, I always start with the top of my file level along its length and also across its narrow width from side to side. Then for the next 1″ I pitch the top of the file forward (as in the second step shown above) and this increases to a more productive cut. After that, along the remaining length I make the adjacent face of my file perfectly upright and this gives me my aggressive power cut – perfect for dovetail cutting when there is minimal cross-grain cutting. Where the saw may be used for more cross-grain cutting than with dovetails it’s best to make progressive change. The shoulders of tenons, for instance, or simply crosscutting wood to length. 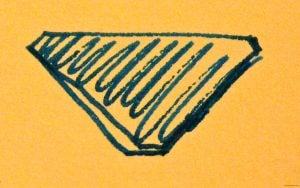 Many people think a saw file to be three-sided when in actuality they are six sided with three large faces separated by a narrow flat face, which creates an appearance of a curved gullet.

This is a pattern for a rip cut pattern used for crosscut sawing.