Shooting boards from times past came in all shapes and sizes. In 2006 I wrote an article for Popular Woodworking (USA). They only wanted three pages but it kept growing as I remembered the shooting boards on the shelves in shops of my youth. It ended up as a 36-page pdf and covered a wide range of shooting boards once considered essential to any joinery or furniture-making workshop. Something shifted with the advent of mass-making machines for every workshop. The development of compound mitre saws, chop saws, table saws and so on rendered these once-common and fundamental pieces of equipment redundant.

My shooting board with a Veritas bevel-up, low-angle plane 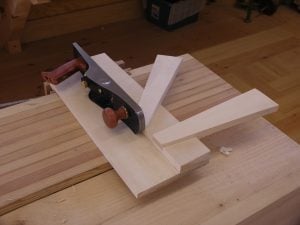 Whereas it’s true that more accurate machines with spring mechanisms and tight bearing and bushings are now the standard of most machines, the variables in material and vibration can often compromise that perfect cut, causing minute ‘chatter’ on the surface. So too even with a sharp cutting edge, the surface finish can never quite match that of a finished plane stroke. Looking back at tome of the fine workmanship of the 1800’s I still believe that even with our high levels of machine engineering we have failed to equal those high and consistent standards set by pre-machine-age woodworkers of Europe and it’s primarily because we have relied in increasing measure on machine methods, believing that in some evolutionary process we have bettered what existed by substituting skill for no-risk machine methods that supposedly replaced those skills. In reality what we did was displace care and concern of a man connecting with his work to adopt much faster methods for the speed we operate at and so this became the economic requirement rather than the standard of workmanship. 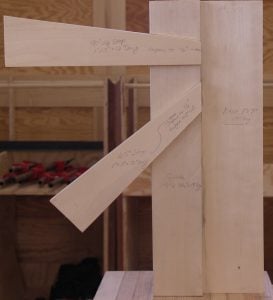 Regardless of speed and economy in work, craftsmen could cut and shave a mitre in seconds using a mitre box and shooting board. At the woodworking shows I ask the attendees whether mitre boxes from Home Depot work well. Everyone shakes their head in hopelessness that anyone would use one expecting perfect mitres. In my article I point out that the problem is these experts at Home Depot only sell half of what existed. The mitre box was the rough-cut. It brought the material within close approximation to the finished size, but then the shooting board perfected the cut within thousandths of an inch and the mitre itself was as polished as the plane’s cutting edge. The same shooting board would give a dead 90-degrees to the same standard and square in both directions too. 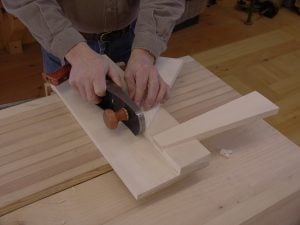 Shooting boards suspend the wood so that the wood can be chocked against a definitive stop. At the same time the shooting board provides the platform along which the plane travels so that wood and plane unite with an exact seldom seen by any other method of working wood. Shooting boards are developed for planing any face of a section of wood regardless of grain direction. Whereas most craftsmen could capably resolve any such finishing detail in an individual cut, repeated cuts on cabinets and joinery could be more expediently executed using the shooting board to perfect the cuts. The most basic shooting boards work best Even in their most basic form, shooting boards are fundamental equipment for any hand tool workshop. They are simple to make and easy to use. I suppose square and mitre cuts are the two commonest needs and the commonest cuts. Imagine perfect mitres every time you make picture frames or square end cuts prior to joinery. That’s what the most basic shooting board will give you. Any hand plane works with it so you don’t have to go out and buy anything special, but if you plan on making hundreds of mitres or continuously using mitres or cuts over years to come you might want to consider a low angle, bevel-up plane. 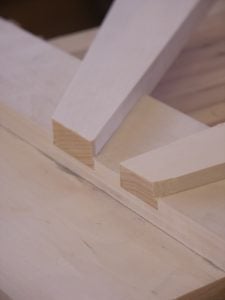 The shooting board shown is an impromptu one I made at the Baltimore Woodworking Show last week and it’s one I make and use regularly. The recesses for the stops need only be 1/4”- 3/8” deep. I used a hand router to get the depth even as I would a housing dado.