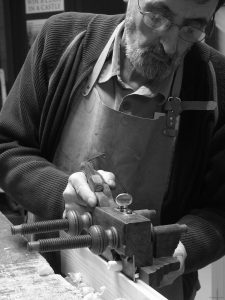 It’s not hard to see why wooden planes were abandoned when you think that the wood used to make one would be cut from the tree, slabbed into stock thicknesses, kept for several years under cover to naturally air-dry as slowly as possible and then be converted into working stock that required much hand work. It wasn’t so much instant abandonment as, well, a reluctant giving up in the sense of surrender. It was a slow, laying down of the tools by one generation and an apparent dismissal by the next. The message was poignant in that the surrendering came as a fait accompli:

Fait accompli – an action which is completed before those affected by it are in a position to query or reverse it.

The changed face of working wood

Industrial giants like Stanley, who’s goal was purely to make money and oust all others from the market, were the big guns of the day. Machine manufacturers too industrialised all processes of woodworking and so Real Woodworking jobs were gradually phased out and eventually became lost to the individual artisan who became part of the mechanised world of commercial production. At woodworking shows over 95% of attendees are amateur woodworkers. In general, the only options for them, because most of them never had the opportunity to learn and master hand skills with hand tools, adopted industrial methods, not realising that in just a few hours they could be complementing machine methods with developed skill unneeded for machines. Unwittingly they find themselves on today’s conveyor belt of unwoodworking. 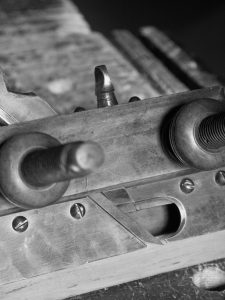 Giving up an inheritance

I think it’s true to say that passing on knowledge of tools can only really happen in the tactile. You have to feel the difference. I cannot convey to you the absolute ease with which this plane ploughs its groove.

Here are images that bring black and white reality to a sad loss. Do you realise that this step in the history of woodworking is quite irreversible. We will never see planes like this produced for user craftsmen again. I bought this extremely useable plane for £80 or $120 with shipping. I will keep and use it for the remainder of my life, which I have no control over, but I hope will be long.

If you get chance, try it out.

Thousands of you who read this post this week and over the weeks and months to come will never use a wooden plane at all let alone a wooden plough plane like this one. 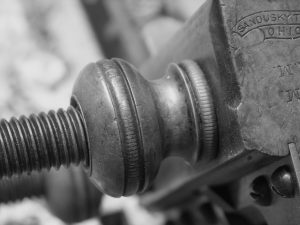 For the record, it would be impossible to produce this plane today for less than £1000 or $1000. It is impossible to for me to convey how wooden planes feel; the value they have in thousands if not millions of buildings would be equally impossible for me to convey. I cannot convey that these planes feel like no other in the sense of solidity and positivity. They really, really work and they feel very lovely in the cut, no matter the wood. 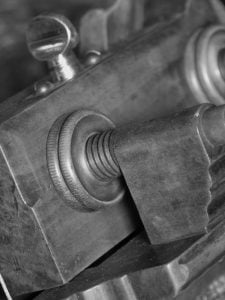 The ones that say this the most, and they do say it, is the professional woodworker. Usually they have never worked to this degree with hand tools. When they come in the workshop they look at hand planes and make statements about how archaic they are. When they see a wooden handled handsaw made by Disston they say, “We use throwaways today. Can’t be bothered sharpening them. It’s cheaper than a file and better too.” I think they may have a sense of loss but not want to admit that what was was indeed better, more organic, more, well, within the craftsman’s reach and control.

It isn’t trivial nostalgia that makes me post of these wonderful tools, but to record here the reality that for those pursuing Real Woodworking these tools really do work. That our forebears did the best that they could to produce working tools from the raw materials they had available and that does not mean we have bettered what they had. The centre of thrust (COT) through the low wooden handle really the power in each stroke. You will not regret buying one of these planes if you find one in good condition as I did.