I was wondering if there was a rule of thumb for determining the ratio of the width of the tail to the pin in dovetail joints.  It appears that people favor the appearance of very thin pins and thick tails.  From a structural standpoint,  it seems like that would be fine for a drawer in a jewelry box, but less so for the body of a large tool chest.  What are your thoughts on the matter?

This is a fairly frequent question to which there is no definitive answer.

These dark dovetails show some early dovetails from the tool chest I showed in the blog yesterday and are probably Georgian, making them somewhere I think between late 1700 to early1800s. 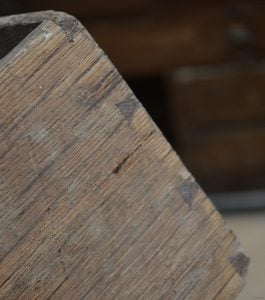 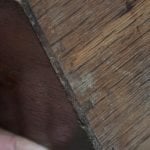 Dovetails were once commonly cut by eyeballing the size and almost all of my dovetails come that way too, as that was how I was trained because of the need for speed. The nice thing for most woodworkers working on home projects is or should be that they can decide the amount of time they invest. I have never been a woodworker for anything but making my living as a working artisan and combining that with a stubborn refusal to compromise my work and use routers and jigs means working efficiently. No one ever gave me a blank cheque and said take your time, so economic efficiency has always been critical to my workmanship. 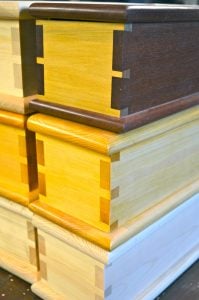 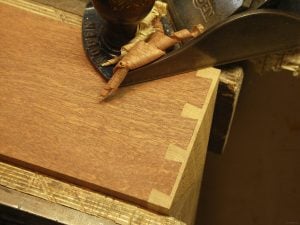 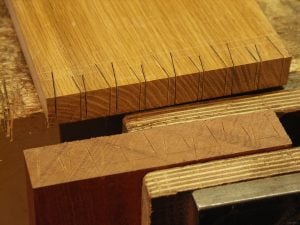 To answer your question. I, in general, anyway, always start my dovetails 3/8” from the outside edge and rarely if ever use half pins on the outer edges because I like a little more bulk here on the outer wings for strength. Another reason is that dovetails and drawers go hand in glove. That said, 3/8” gives me room for a drawer bottom groove and enough meat on the drawer sides to compensate for wear and support to the drawer bottom. I then work out how many tails I want. Usually I like tails to be between 1” and 1 ¼” on projects reliant on dovetails more for strength than aesthetics. I usually continue with 3/8” pins between my tails and so, depending on how many tails I prefer or want for a project, I divide what remains by two, three, four or whatever after I have deducted the collective intermediate pin sizes from the remaining wood between the initial outer pins. Of course tails and pins can be equally sized as they were in the early machine-cut dovetails of the 50s and 60s, but they always look like they were made by machine and no one would usually equally size pins and tails in hand cut dovetails.

Here is one of my business cardholders with eyeballed, non measured dovetails. 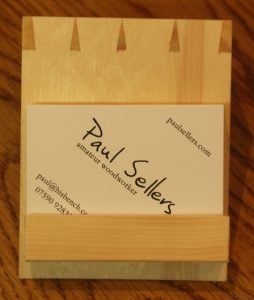 Whereas it is true that on more refined or prestigious pieces finer pins are more desirable, they can be weaker in the pins. I have had a perfectly fitted thin pins that after fitting pulled out at  the root when parted for final gluing. But that’s part of the refinement. Bit like the difference between a draft cart and a carriage. There are some options to consider. I do like refined dovetails on quality work but for tool boxes and for what I call vernacular work I am pretty consistent with the 3/8” pins rule. Out of the thousands I have made, in 48 years I have never had a finished joint fail.