Beyond the pond a new group chats perhaps a little reservedly as they cross the footbridge to the New Legacy workshop. They never met one another before this encounter and beyond exchanging names and greetings, had it not been for the class they enrolled in, it’s unlikely they would have ever met. Just as one part of the dovetail is carved away to make room for another to form a joint, that’s how friendships form. 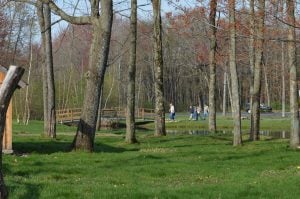 In real woodworking a handful of people work at a few benches and talk back and forth for an hour or two and become friends. Being uninterrupted by the invasion of machines, not needing dust masks and ear protection, means they can smile and listen to banter back and forth throughout the day. No one shouts or screams and certainly the atmosphere is clean and healthy beyond measure. Life in a hand tool school is open, clear, clean and friendly. 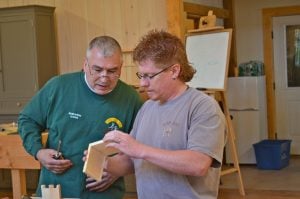 I wander from bench to bench and never raise my voice. We talk, work hard, steadily, and soon become friends. No barriers exist save for those with competitive spirits—those who always want to be the best, the fastest, the most extreme, they create their own barriers, separate themselves from others and hide behind insecurities. Seldom do they find real friendship. 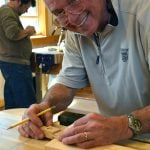 People talk of being a team when they work for companies who talk of teamwork, but they all want to score the actual goal and for one reason only. In this class they will become friends by the end of three days.

In two days I will be returning to the UK. My objective in starting the school is completed and we have New Legacy training in the USA. It’s only a beginning, but beginnings are important in making inroads to uncharted regions. 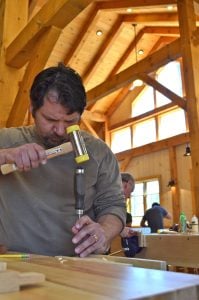 I don’t know who cut the first tree or made the first home beyond native Americans, but I know it must have seemed quite awesome to hear the first axe blow resound through the virgin forests of old now long since gone. 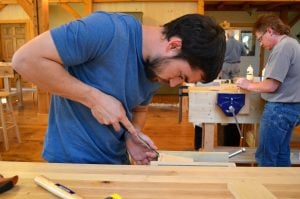 My creative workspace feels almost settled. A few more tools, just a handful really, and I will feel that sense of completion I need to be fully equipped to be creative and settled. The friends I am working with to become the new genre woodworkers are developing into furniture makers, forming a cooperative and going against the impotent tide of importation. 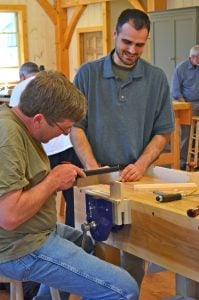 Making and creating a creative environment as an eco-system that nurtures real workmanship hinges on decisions to get off the industrial conveyor belt of commercialism to re-establish small coops of inspired workers. Individually we can make a difference to stem the consumerist spirit that now dominates and instead own our own employee-owned workshops. 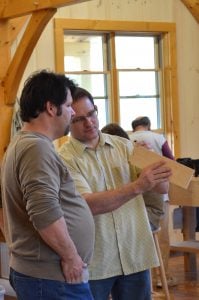 When I leave, in between classes, new projects will emerge with hand cut dovetails, and carved seats. A batch of hand made oak stools, seventeen of them made to a new design, with mortise and tenons cut by hand will replace those imported by Walmart and others from Thailand and Malaya. You see, beyond the classes, it’s a new endeavour unfolding into a pilot scheme for others to emulate. It’s not especially new. Other entrepreneurs have done it too and some people have worked together as friends for decades through the centuries. We can all make simple changes not based merely on economy of finance but economy of friendship and care. Most people want to be a part of something like this and don’t know how.