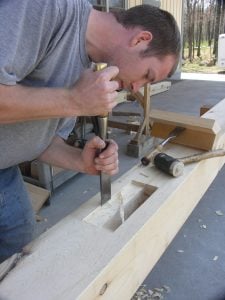 watch Nick working whenever I can. Through the windows as I work inside at the bench and he outside on trestles four times the size I might ever need. We meet from time to time, he to watch me and me him. Days pass, our joints differ only in size, and what we make lasts for a century or more. Two worlds of working wood meld in perfect harmony by masters in fields few will ever know the depth of. Though massive by proportion, Nick works carefully at the joints he makes to ensure tenons seat fully into sockets and mortises and trunnels draw tight the shoulders. Nick is young, has years in future yet unfolding and sees with clarity the work ahead. The beams lie flat yet soon must stand a massive vaulted frame to carry the fore part of the roof and I think of the man wielding the slick, the chisel and the rawhide hammer that drives both peg and tenon home. I am impressed by the decision he made to master the timber frames and patterns ancient and true to those who set patterns he now holds as his own.

Nick goes against all the odds to be what he is. His lifestyle embraces a sphere of creativity different to mine but none the less creative. 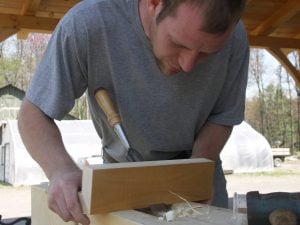 He thinks three-dimensionally, builds by hand and makes and shapes his life solidly, simply and wholly. Soft-spoken and unflappable, Nick lays out his joints with precision and care and cuts to line as cleanly as any craftsman might. The skilsaws and chain mortise machines have been abandoned for simplicity without compromise.  I like that really.

These joints await the tenoned posts and braces yet to be. 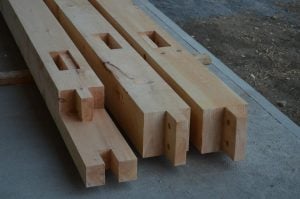 I think of these joints coming together and hope that the ones who buy his future structures see the decision he made not go with the empty ebb and flow modern life offers but stand instead a man who climbed down from the conveyor belt. I have in recent times past stood to watch his joints come to rest in the simplicity of framed symmetry above my head. Pure workmanship.

Workmanship, a word reflecting dirt, sweat and honest care of conduct at work and in work is now a lost word in our vernacular. How often do you see “good workmanship”? How often do you see and applaud a “workman” honest in his work? Do you know more than one or two workmen? One? I see the work of the ‘artist’ woodworker from time to time and I look as others who think they know applaud him or her. It’s often no more than dishonest work that stands just as the lie stands in truth’s stead.

← Another class beginsNicholson Files and Home Depot blow it again →