Yesterday reminds of different days past when I had a ridiculously unachievable goal where I didn’t know it was impossible to do it so I did. It was one of those days when in a push friends gather to sweep and clean and add their two-pennyworth to make sure you or someone else reaches what might otherwise be so unachievable. 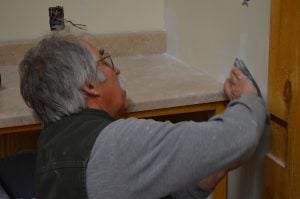 Seeing New Legacy come together behind the scenes is the privilege those who take risk find in off-the-grid experiences beyond the conveyor belt. You cannot explain why having no bought electricity feeding your home and workshop through the umbilical cord of the National Grid feels so wholesome, but for some unknown and even strange reason the satisfaction you feel just seems right. For me it’s a like milking your own cow and gathering eggs from under the chickens. Having lived many years beyond the sidewalks, tubed rivers only a handful of people ever saw, there are few experiences enjoyed more than working together with people who feel the same way. 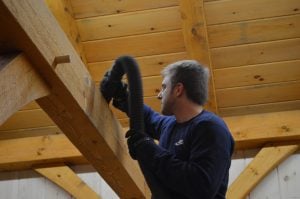 New Legacy goes beyond a brand name no one’s heard of to express a kindred unity many people seek but rarely find. It’s a community of woodworkers with other “real” jobs beyond wood whereby teachers and dentists, software engineers and ex-racing car drivers find virtue in working together for the common good. It’s a belief that a few people have in discovering they don’t have to make money or gain status, power or recognition to find fulfilment. If I were to walk away from what we have accomplished and leave it in the hands of others I would have achieved my goal. 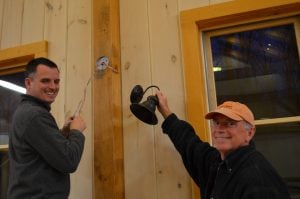 The light sconces were hung last night and wires fished down tubes of steel to that grid-supplier. Vacuuming beams and nailing trim until 11pm meant ever-deepening relationships in a common cause to get the job done well and in time. I was fitting and hanging doors to the tool cupboards while Tom, Arian, Jacob and David fitted the last tool trays and shelves to complete the new workbenches.

This is my friend Robert who drives tractors, trims off trees and cuts boards and beams from logs to clad buildings and build structures like the new woodshop we are finishing. 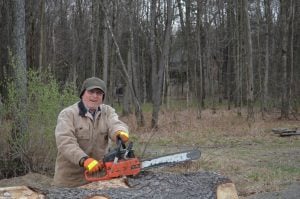 I don’t think Robert will mind if I tell you he is 73-years-old and works hard every day all day. Just watching him work throughout any given project is a lesson in economy seldom seen. It’s a lived life enthused and inspired by honourable work and sweat-soaked honesty, which is the reward itself. Yes, it’s hard and sometimes long and arduous, but that’s who Robert is.

The thing that saddens me the most is life a man has unfulfilled, not knowing yet to be undone, that life comes to a close.

I wonder if a man in work mundane despairs his wasted past now trashed without a pulsing, beating, pulsing, pulsing heart’s desire filled full.

And could, would, any man, an artisan, beyond a keyboard’s interface record his life in something other than the thing he made?

Most I know make nothing now by hand but buy by brand those things they need yet sadly feel the loss of undeveloped, unmastered skill.

The thing that saddens me the most is life a man has unfulfilled, not knowing yet but then too late a life undone and closed.

I thought of this poem when I thought about those who never discover the real value in the honour of physical labour.